Or so I feel, and I entirely blame the thick gravies and dense breads. I was just looking at a menu and saw beer-flavored cheese. What? I omitted to mention yesterday that our elaborate breakfast buffet includes mini hot dogs. Lovely.

Well, day 3 in Vienna down, and I have found some threads of continuity to report. Music. Brats. Gold.

Confession: I have broken out into the hills are alive and Edelweiss,and I'm totally not embarrassed. Vienna also happens to be a classical music haven extraordinare. Mozart, Beethoven, Strauss, Haydn, Schoenberg, Schubert: we set out on a quest to hit up their homes yesterday. We started with Mozart’s house, and learned more about him than we'd like to know. It seems Mozart was not a poor artist, but got paid quite handsomely (more than a doctor at the time). Turns out he was an obsessive gambler. Who knew!? Not my music history classes, thank you very much. Here's his house turned museum, at least the few parts of it we were allowed to photograph. Few attractions can be captured by camera here.

Next we were off to Strauss’s house. Goodness, you have to be dedicated to get into this wormhole. No worries, we were all over it. His apartment was in the Jewish quarter, which in the murk of the day, looked fairly morose. There were no signs on the street, just thehouse number, and we walked into a dark---no lights at all---building that was home to stray leaves and strollers, with slumping stairs. Are we going to get locked in I asked Walker, sensing finality with the door's close. But believe you me, we were committed. We mounted some stairs, and were suddenly surrounded by varnished wood and green papering. We were in Strauss's house, along with one other brave soul visiting and the guard,. This is also the view from his floor.

Lest I wear you out of reading further, let me simply present Beethoven’s piano, 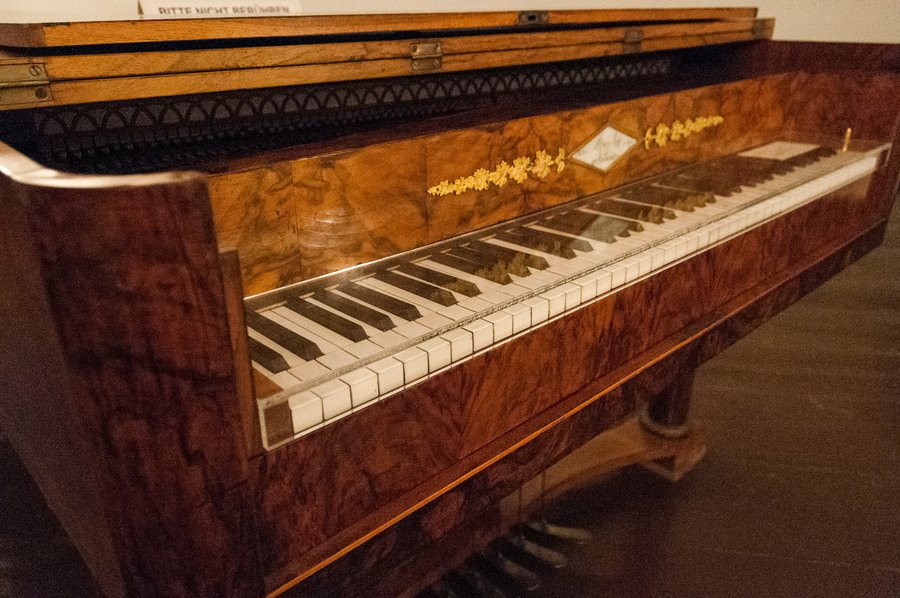 and his brilliant view of the university. 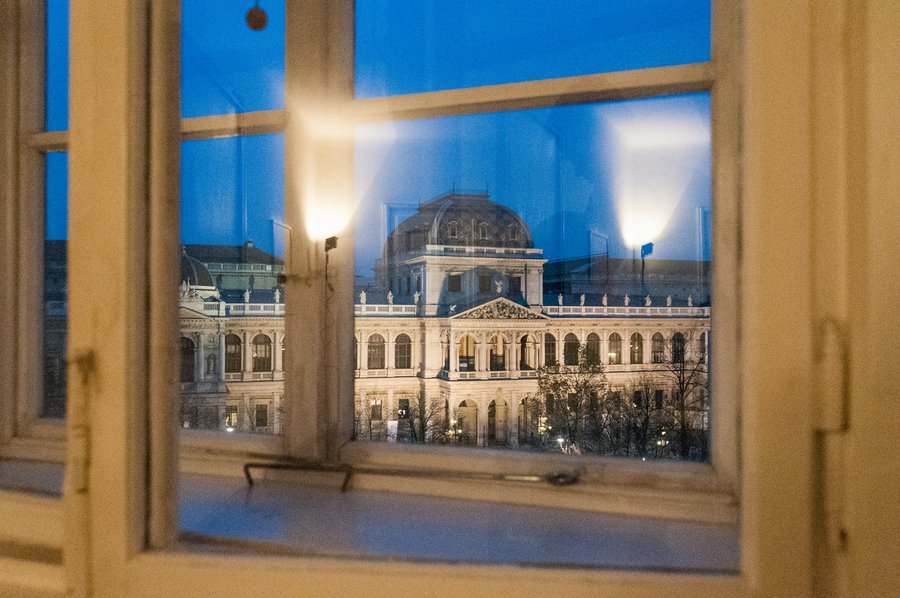 We went traditional for lunch, ya. Bratwurst. (Try saying brat-vurst with the emotions of hate this to get the real effect.) Walker, ever up for a local experience, loved it. I went with a hot pretzel, a lifelong obsession. Never before have I had a pretzel that tasted like rye bread; those sneaky caraway seeds are swarming here. Mezzo mezzo. 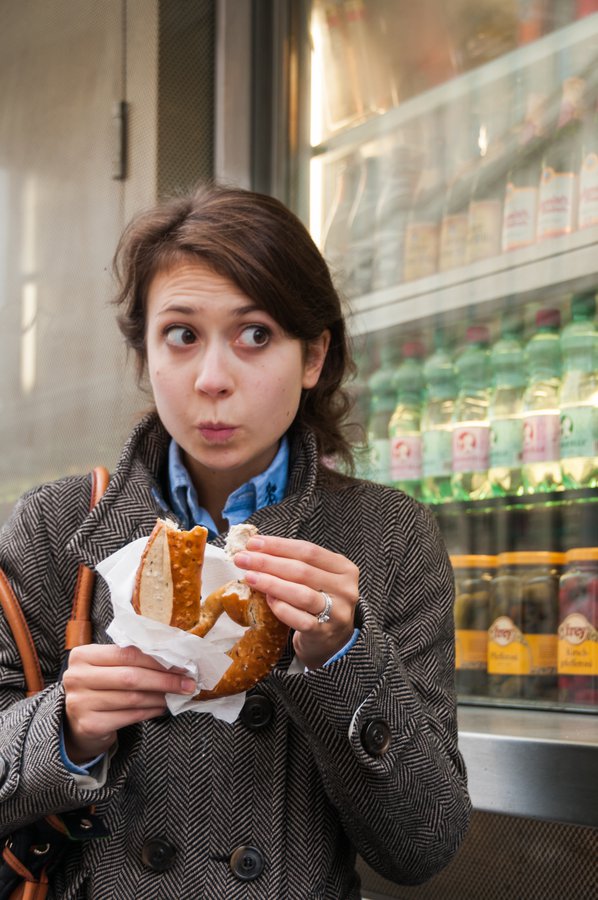 Dude, this place was voted the best in the city 2010 for brat stands. We know how to pick 'em! 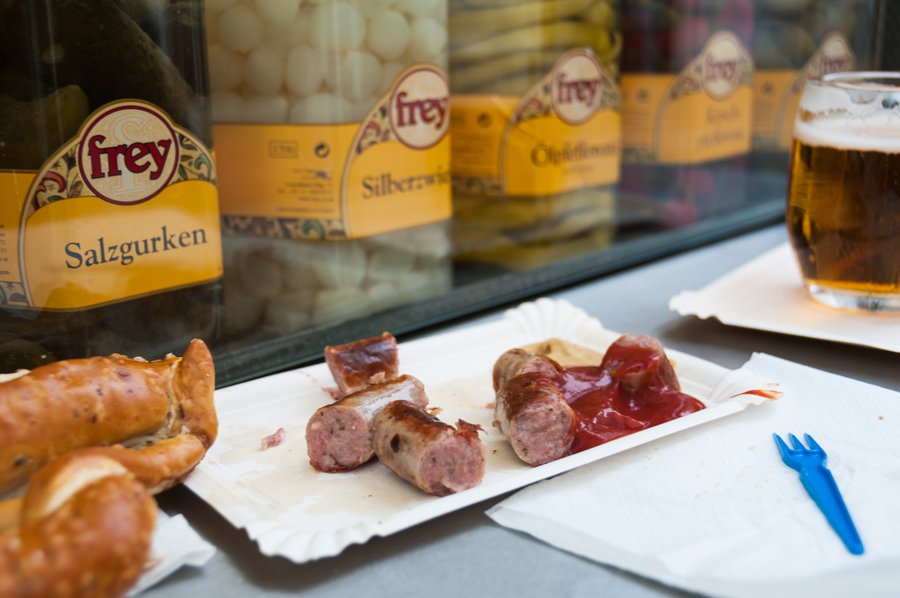 Step one: Take grunted order. Step Two: Impale bun. Step Three: Stuff the brat in with a good dousing of mustard and ketsup. 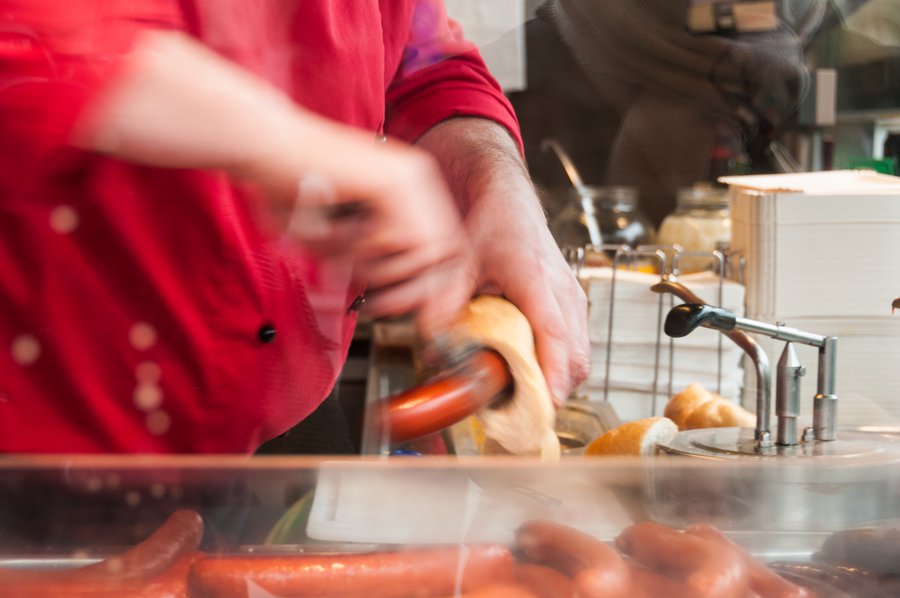 Other than music and brats, we found a lot more gold.

Ambers, ochers, marmelades: the most surprising thing on this trip has been the colours. We passed through a park accidentally yesterday, and although it was very wet and cold, the stately trees stood properly, arrayed in their splendid regalia. 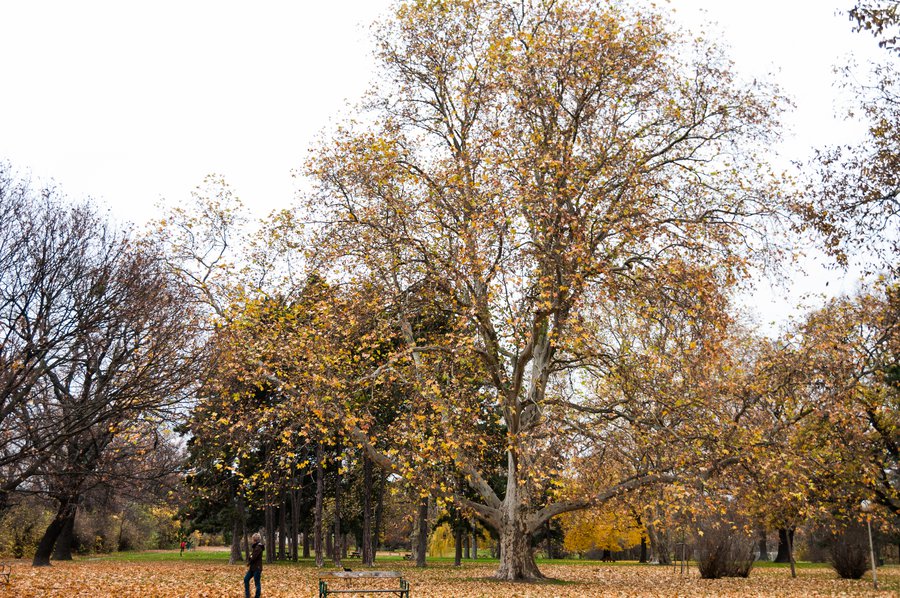 See the bottom of this trunk? There has got to be a secret world of elves down there. 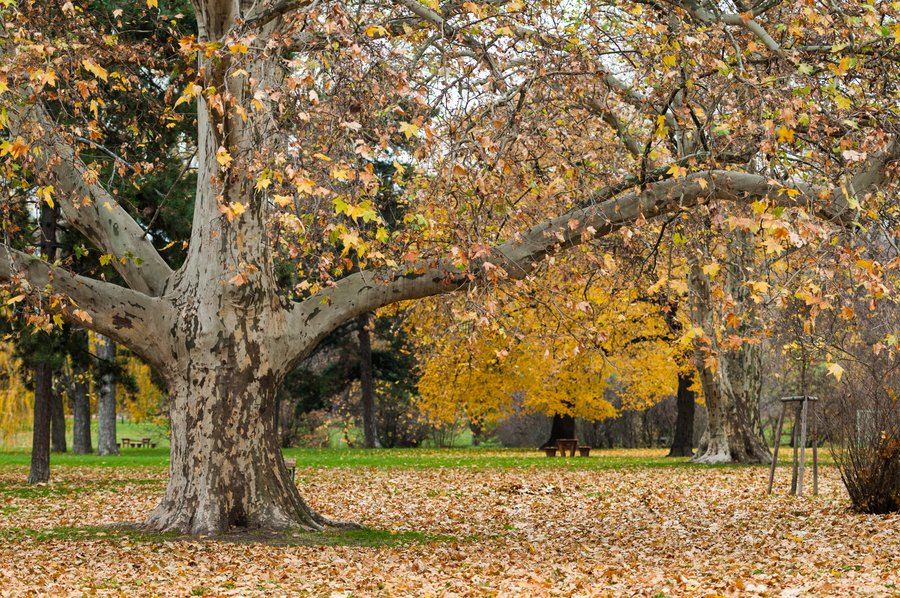 And fairies floating up here. 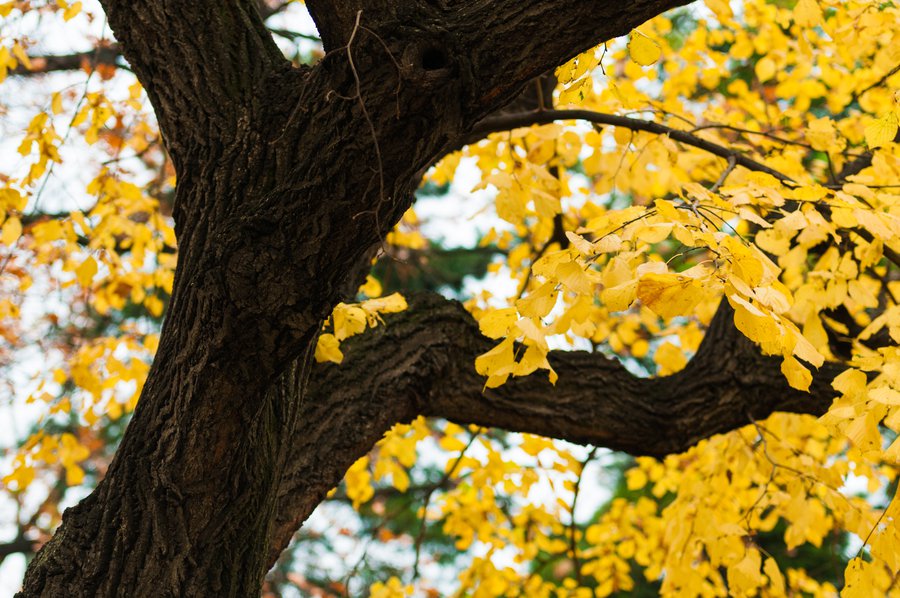 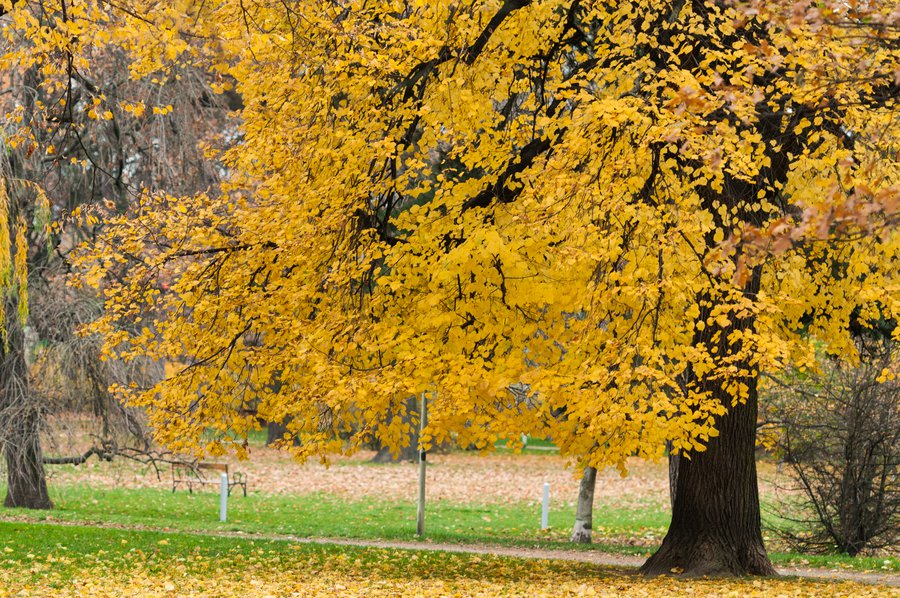 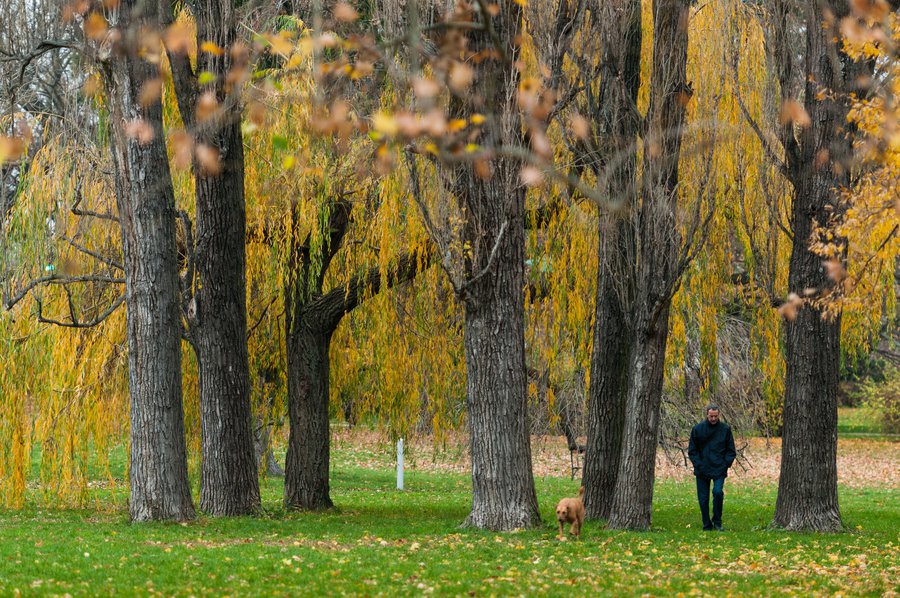 Clearly, they don’t believe in leaf trucks here; leaves brim in every corner and are piled thick on sidewalks. I like that they don’t suck away the airy beauty so soon. 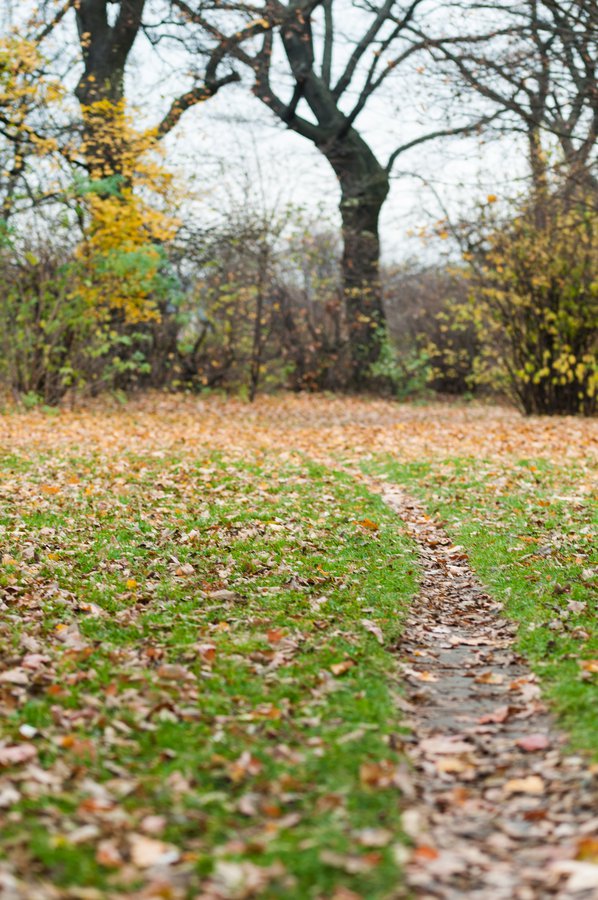 Past the park, we found the Schoenbrunn Palace, stacked with room upon room of gilded walls, scarlet carpets, excessively high ceilings, and parquet flooring. Inside was very much like I would’ve expected from a Viennese palace: just French enough to be fancy, but German enough to seem powerfully imperial. Sadly, no photos were allowed inside. 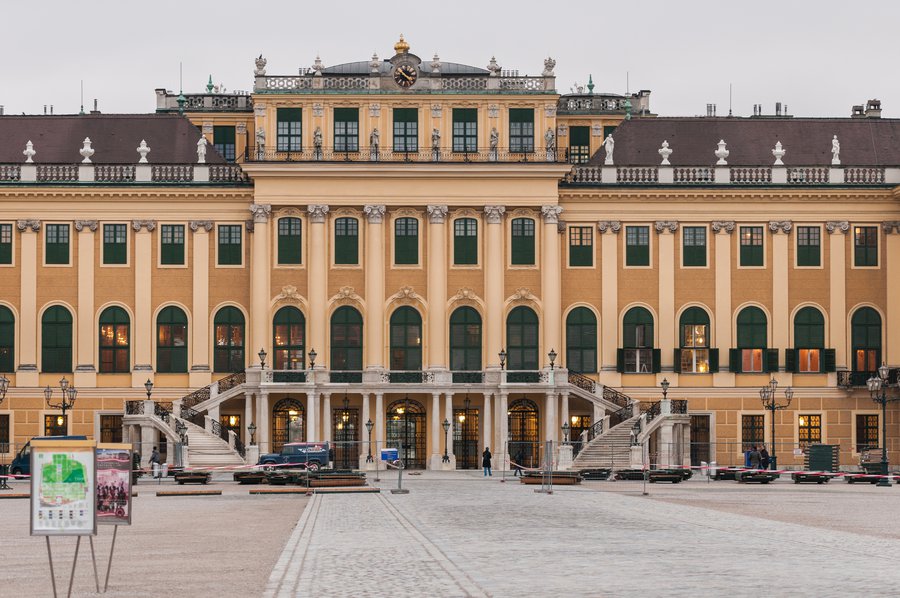 Our favorite room was the room where royalty hosted concerts, the very room in which Mozart performed for Maria Theresia when he was six. Napolean, Marie Antoinette, and Franz Josef were the most famous tenants here, the latter reigning from here for 68 years. At the end of the tour, Walk and I agreed he seemed like a nice guy with a nice house. 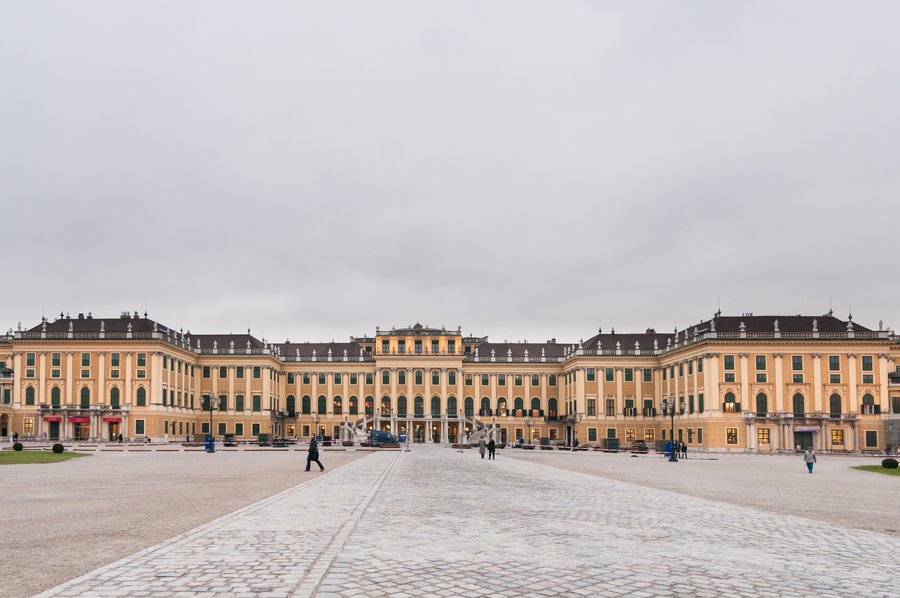 I’ll close with some unordered observations and fun sights of the splendid Wien:

Remember that one kid in third grade who always did exactly what the teacher wanted? Everyone in Vienna is like that. I have the strangest cultural phenomenon to pass on. No one here crosses the road except when the green blinking sign is on. No one. Ever. It makes you feel like you're going to die if you quickly take five steps across the thin lane. That or that you're horribly wrong. Should we care more? Nein.

On the efficiency front, the Wiener Lienen, Vienna’s subway, is utterly fantastic. We’ve never waited more than 5 minutes for a train. Public transportation in Europe is just better; America, please decide to catch the train soon. 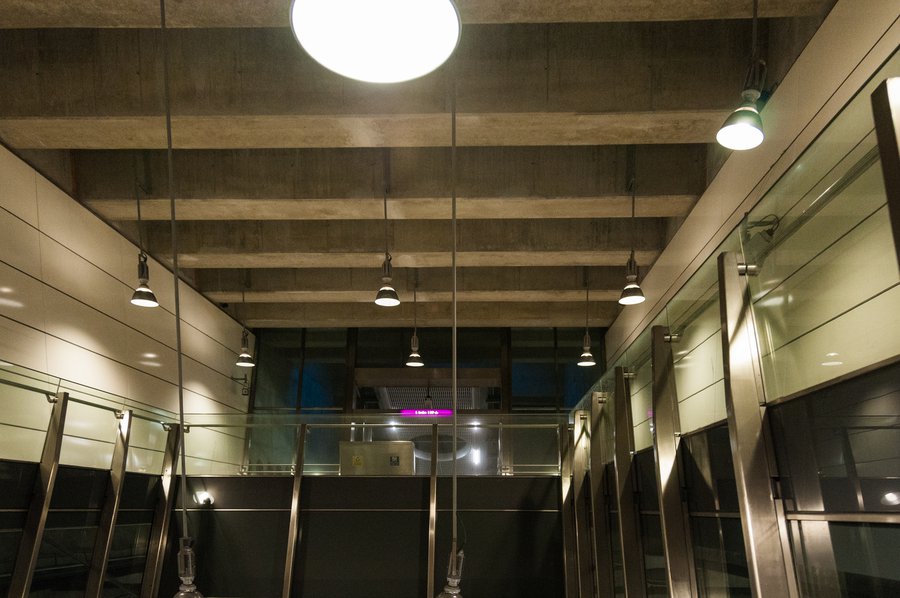 Bike rental dots like this connect the city, and bike lanes run parallel to every walkway. Considering how unlikely the Viennese are to cross a roadway, you're probably more likely to be run over by a bike than a car. 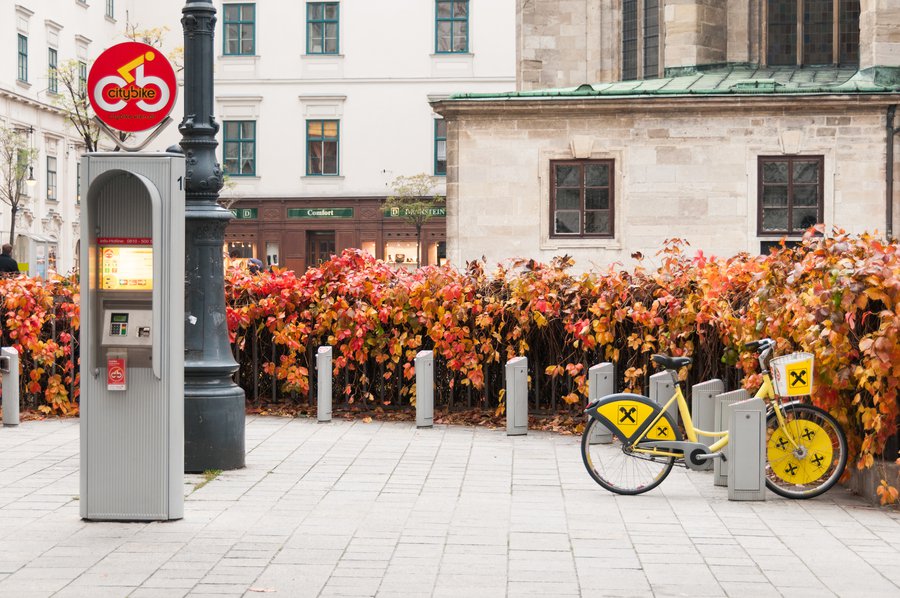 I find it hard to believe the amount of traffic between two four-story apartment buildings is so heavy, but double decker skyways look pretty sweet. 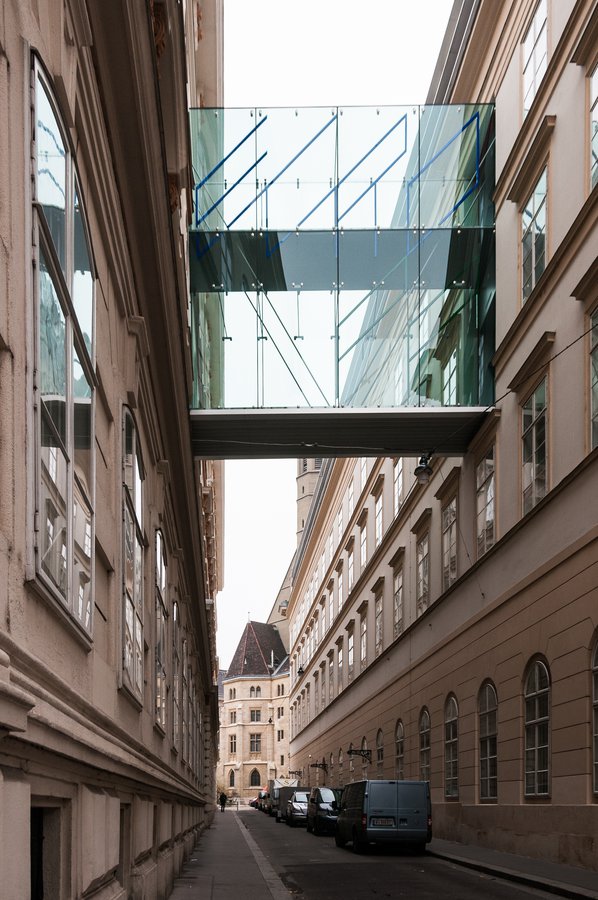 Walking around the large St Stephen's cathedral (the church seen in many photos) back to our hotel, I’ve started asking Walk to take the less smelly route. Horses are pretty, but they sure are pungent. This stable sits in the city center, and the arches reminded me of Sound of Music. 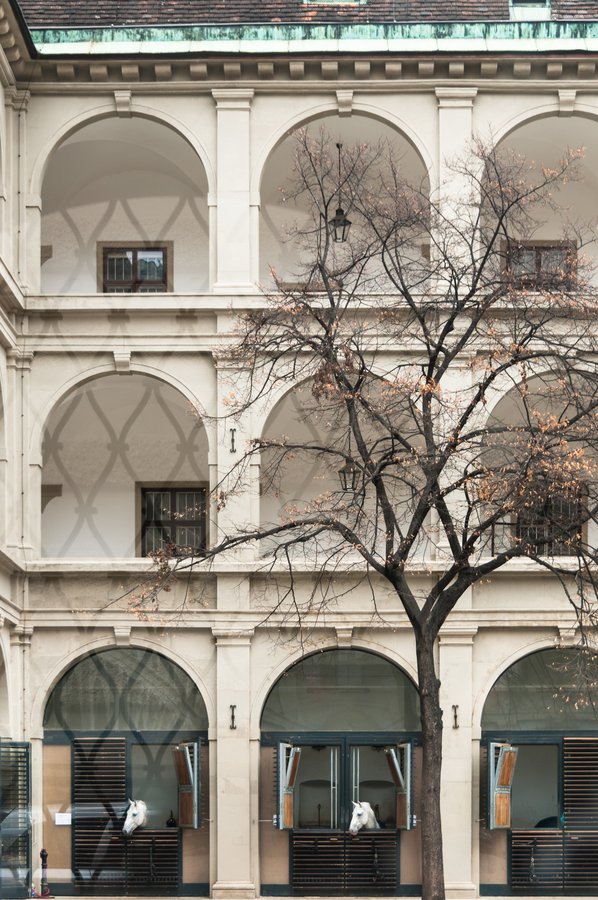 The past two days have been sunless, but there's something defining about only two colours.

The windows here are dangerous for causing sudden halts. How fun is this? 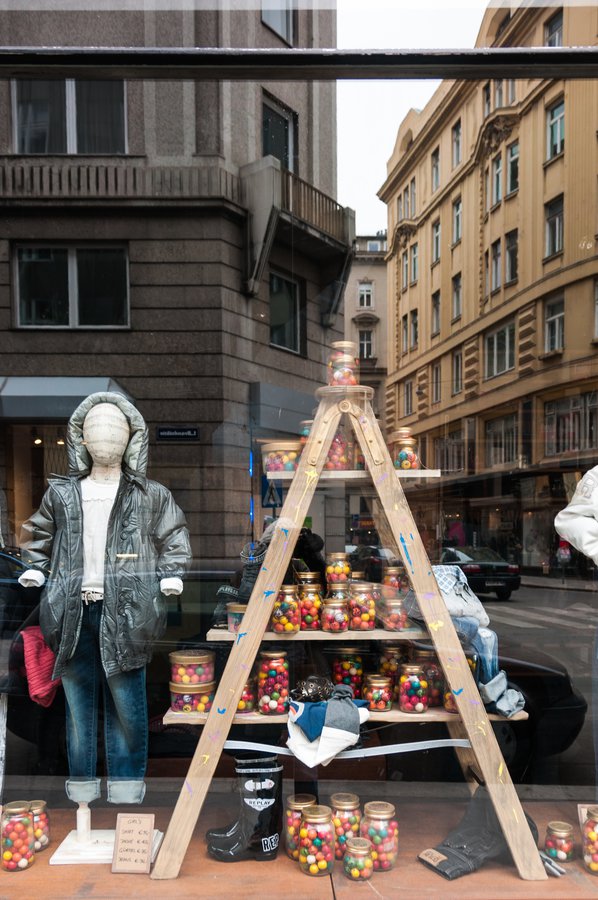 I saw a sign that advertized a movie about New York, and I promptly asked Walker why we call Wien Vienna, but they call New York New York. Why not NewYorkenschmucken? Clearly, they didn't consult me. Later, we bought our subway tickets, and clicked the English button. We loved that it said this. We've been saying it in a German accent all day and cracking up. 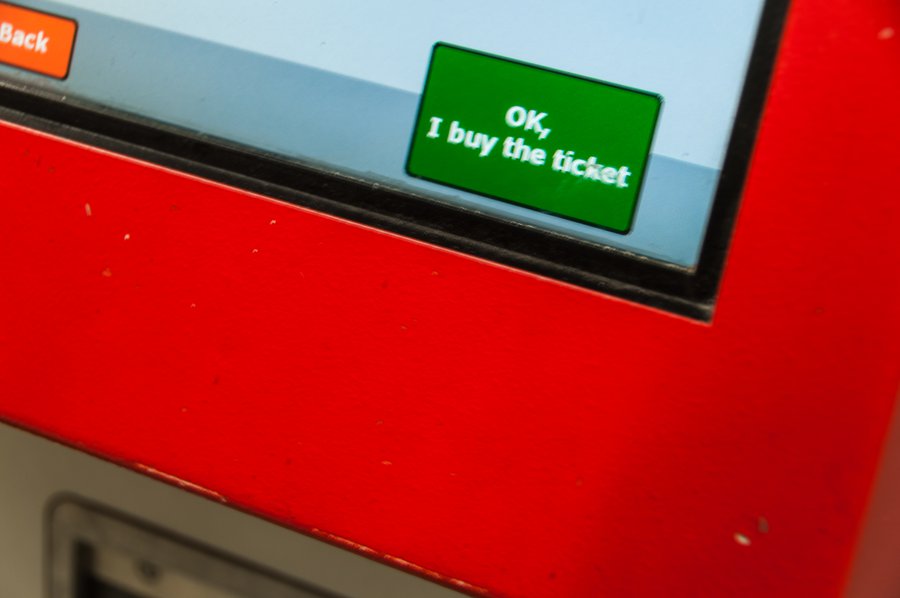 You simply must agree this golden city is stunning, and with that and a ton of laughing, life here has been beautiful. 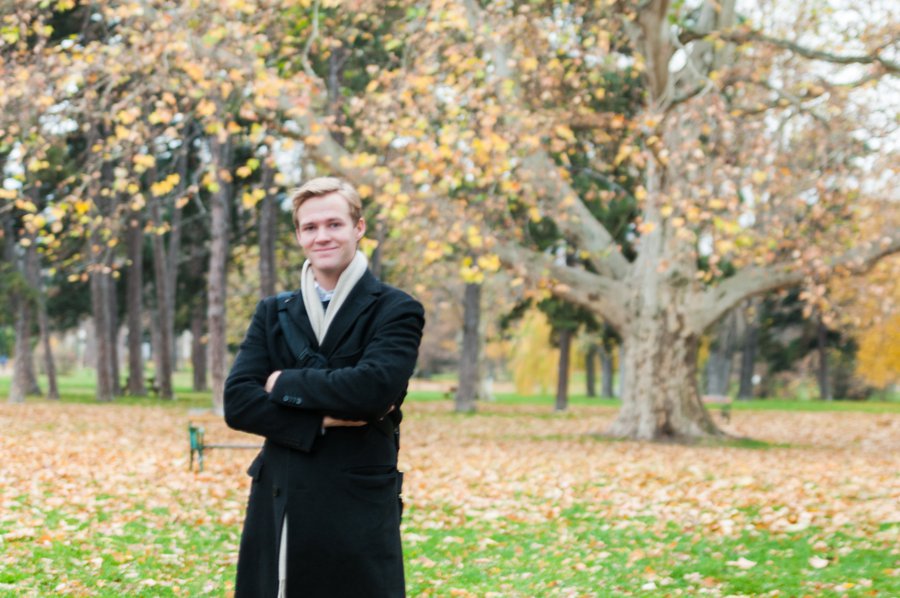 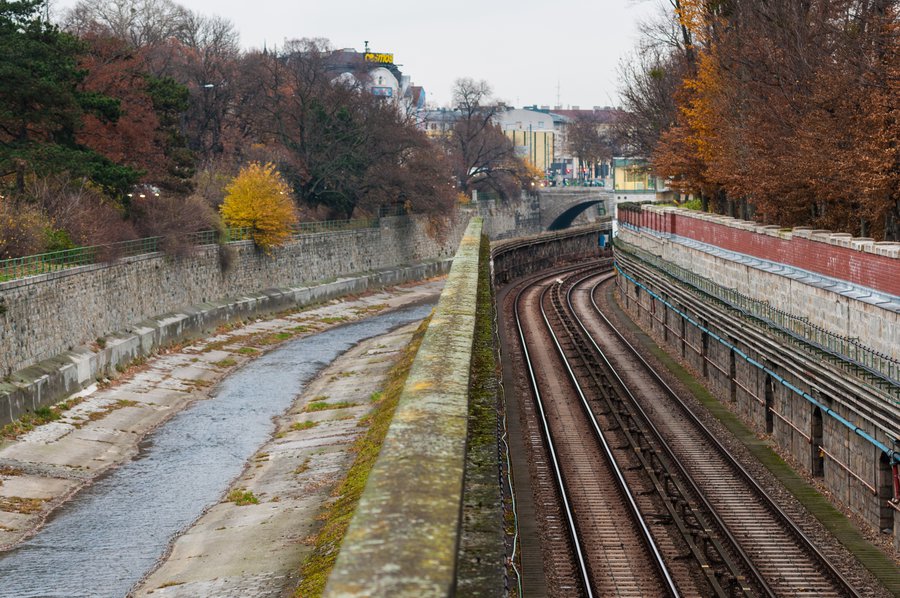 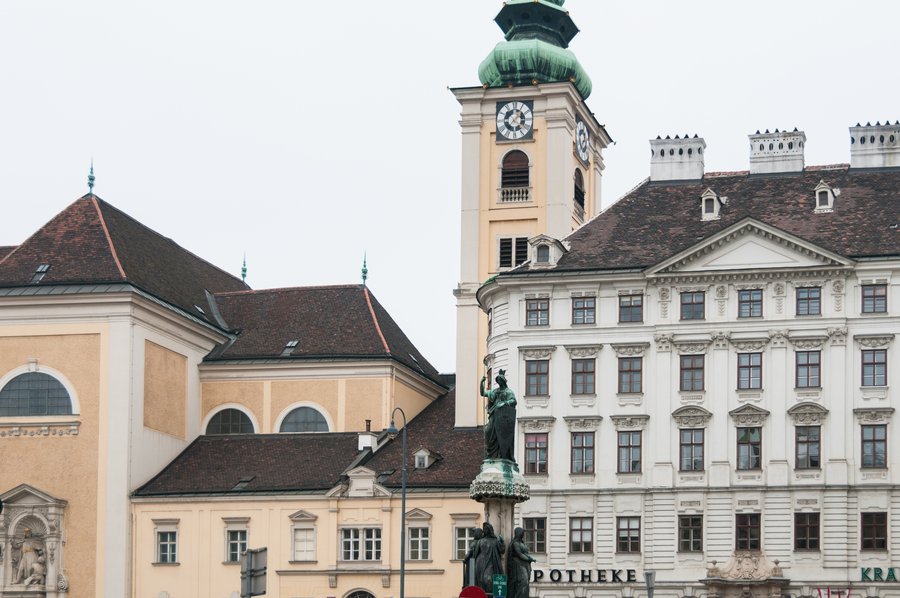 Since I'm a bit behind as this is being posted, we are now happily sitting in our hotel room in Prague. No photos yet, but prepare for incredible enchantment. This city is shockingly gorgeous. As is life. Nashledanou!