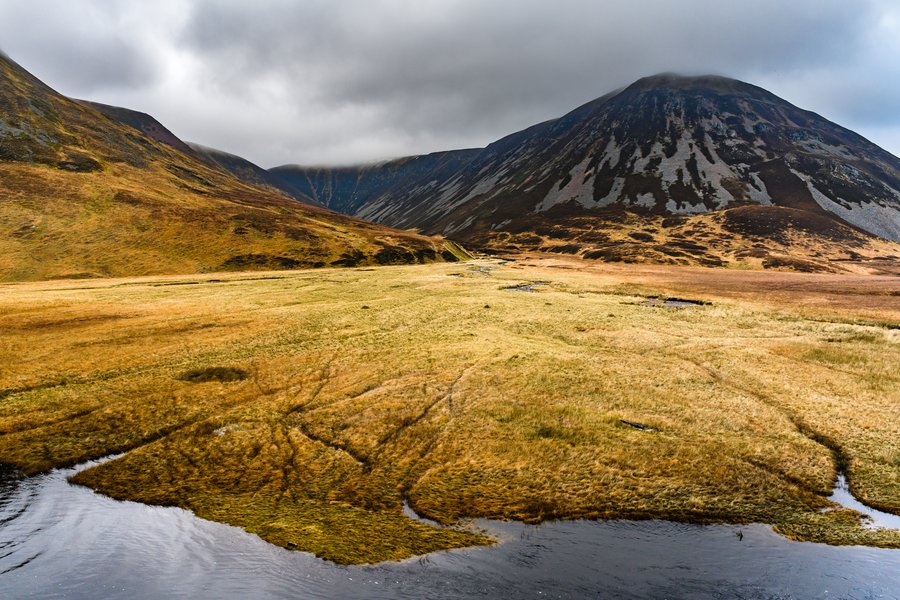 What makes the Scottish highlands so endlessly magnetic is not only the wildness, and seemingly untouched landscape, but how the land holds secrets. The land itself hides vast plots behind steep hills, so every small step can yield a whole new view. A hidden present.

Our trip to Scotland in November's goal was to explore new areas of the Highlands we hadn't yet been. When I read about the work of WildLand, a non-profit funded by a generous family from Denmark, whose mission is "to preserve as much wild nature and its beauty as possible for future generations", I knew I wanted to see their land. They own a collection of rentable homes, but the only property as yet where we could stay in just a room, as a hotel, was Killiehuntly, a farmhouse and estate a bit farther south from our first stop in the Highlands at Alladale.

After arriving to twilight's early hues the night before, we were up with the sun our first full day to look around the landscape. The gamekeeper Ben was  going to be driving us around and took us deep into the glens, the light at once bright on the grasses, and then lighting the whole sky, and then rain like mist again: the perpetual change of the Scottish weather.

Miles and miles through the glen, we passed old estates, now acquired into the new homestead.

Ben's grandparents lived in this cottage, his grandfather a gamekeeper as well.

The continuity and love for the land that Ben had, his desire to be nowhere but here--felt so different than the constant rush for more and change we see often at home in the City.

The surprise of water flowing so late in the dry, fall land caught us more than once.

The highlands, we learned first at Alladale, and then again at Killiehuntly, are not meant to be barren like this, no matter how incredibly wild and otherworldly they feel.

The forests that were once dense across all of Scotland were thinned in the 1700s from shipbuilding lumber, as well as the loss of the deer's predators. The deer love sapling pines, and unless the deer are managed, the forests, which would truly protect the ecosystem and animals, have no chance to grow at all, eaten down to the ground like candy to the deer, we learned.

Killiehuntly is now building fences and monitoring the deer to allow the forests to regrow, millions of pines at a time.

See those pines on the right? There were thousands of the tiniest little saplings peaking up, planted one a second by expert tree planters, Ben told us.

So the plan is, decades from now, for this landscape to be transformed back to its ancient Caledonian pine-covered past.

The rise of green is a promise and a thrill, the plan that will require generations to uphold and protect until self-sustaining again.

For now, the land changes around each moor and valley with the mists,

and we drove 15 miles deep into Killiehuntly's estate to the ever-changing heather tones.

And again, the faint rise of green.

Ben was great at guiding the car for photos, up on ridges that don't quite look like it, but were quite a ride up.

The farm borders some Scottish Forests, managed by the government, and the pines are another reminder of what the land could and will be.

What a gift to the world that the Highlands are being so well cared for by those who love the land itself and its beauty for being whole and healthy. Loved every minute at Killiehuntly, and more to come here tomorrow!