It started on the real Thanksgiving, in Edinburgh. For instants like this, we'll celebrate Thanksgiving a day late.

Oh my heart, what we saw was insane and ridiculously serendipitous. We hadn't even heard of the 25th lighting of Edinburgh's tree, but saw a crowd while perusing the Christmas markets, and were pointed a few steps away. We watched wildly dressed drummers march through thousands of people. Then, the music stopped, I was bored, and my toes felt disconnected from my body---we're talking norse cold. Seeing I was so frozen, Walker asked me about five times if I wanted to go. I tried to persist, and right as my patience had almost waned, we saw this. 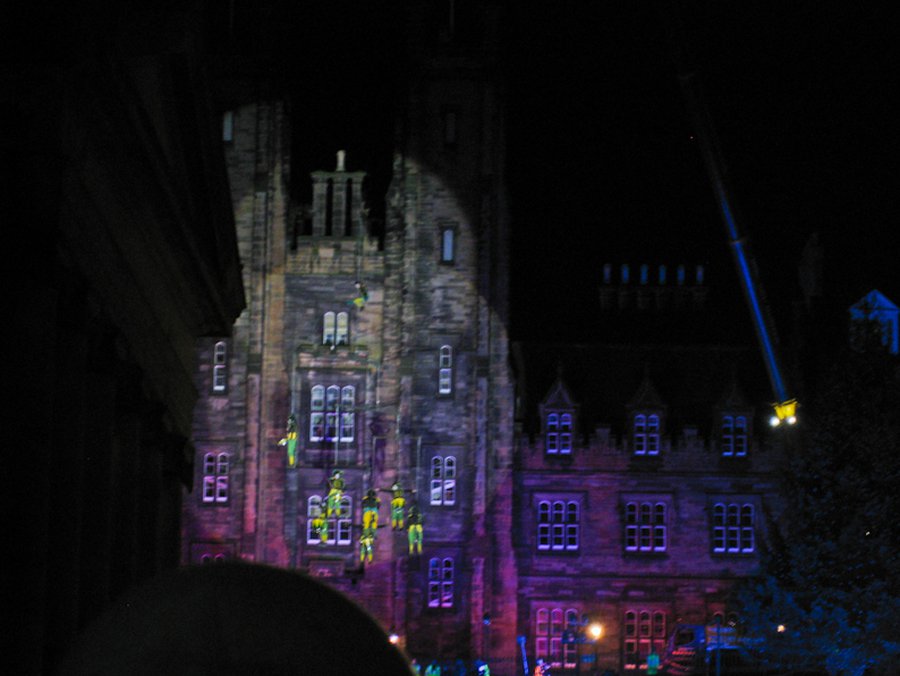 That would be the band and an acrobat suspended hundreds of feet above the city, dangling over castles, from a crane. (We only had the point-and-shoot camera.) 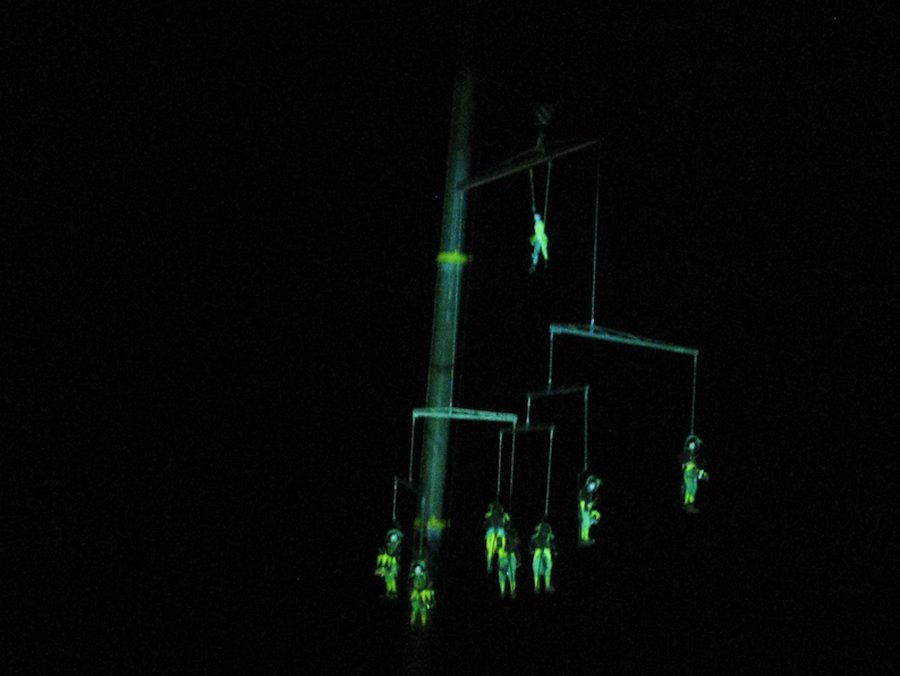 In true Scottish style, they were drumming wildly. The acrobat, unattached, swung like a gymnast over the city, and I almost couldn't look up for dizziness and fright. The winds blew them around, and the crane swung them over the tree. Then, finally it was lit, fireworks burst, and all was well with the world. 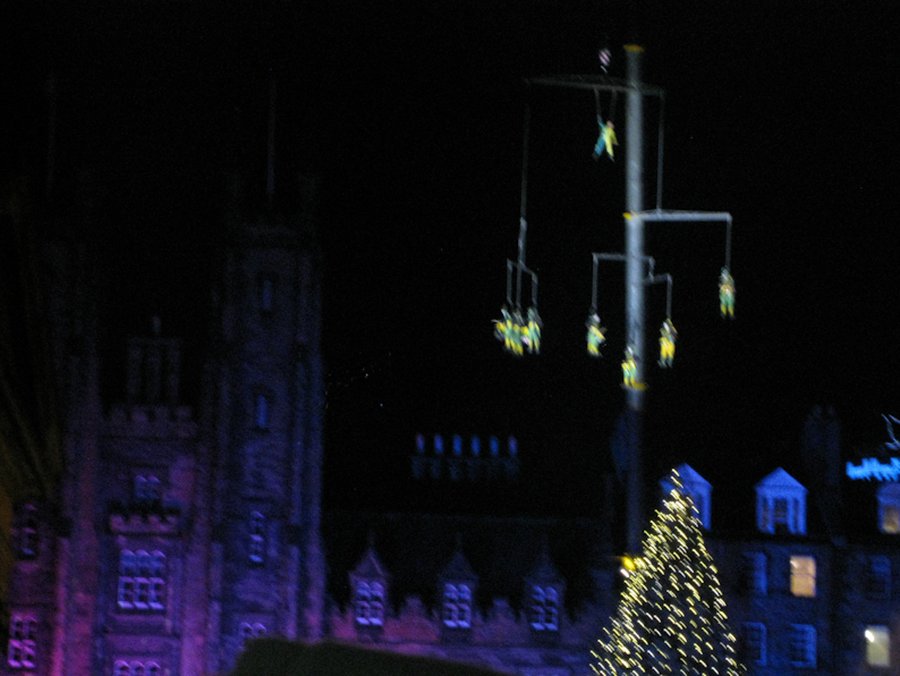 It is what holidays are best at, those episodic moments when you are full of goodness, when you are surprised by joy. It had come, too, when we stopped into St Giles (the massive Protestant cathedral in Edinburgh) earlier and heard the organist playing "O Come, O Come Emmanuel". It was one of those dazzling moments where you instinctively hold onto the people you love. It came, again, in the rub of the Christmas season coming to town while I was still hoping to find a pumpkin to grace the center of our table. It found us in moments of too much cinnamon potpourri in Christmas shops, 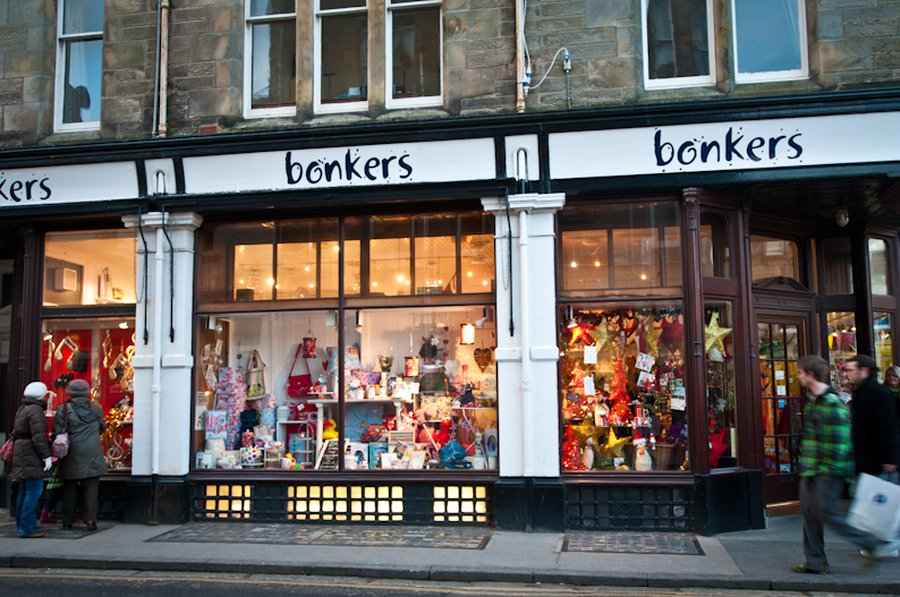 and in the small gifts of the day. Walk found two Scottish tweed ties which he's been sporting like a British chap ever since. 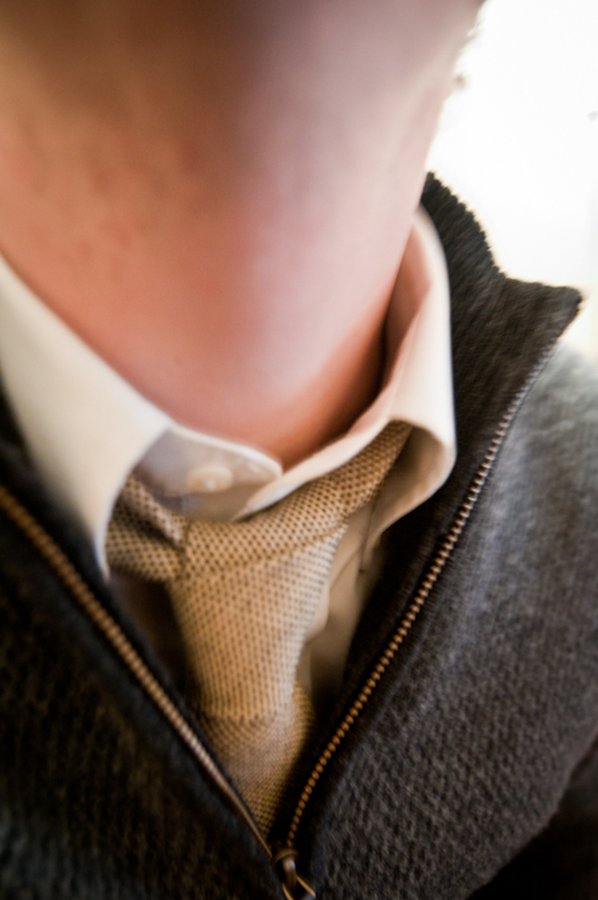 And then Friday, it found us in instant upon instant, stacked so thick I can hardly peel them apart this next morning. Friday, by the way, was the new Thursday, our first Thanksgiving. There was the turkey, also our first. We ordered a free-ranger from the local butcher, and I welcomed it with cider glaze and my big girl courage, which definitely failed me when I had to pull out the neck. When my hand had finally rallied enough to grasp it, I slid it forward about an inch. I couldn't bare to look anymore, and convinced Walk to hold a plastic bag (clean and new) out for me to drop the neck in. I didn't look. I couldn't. 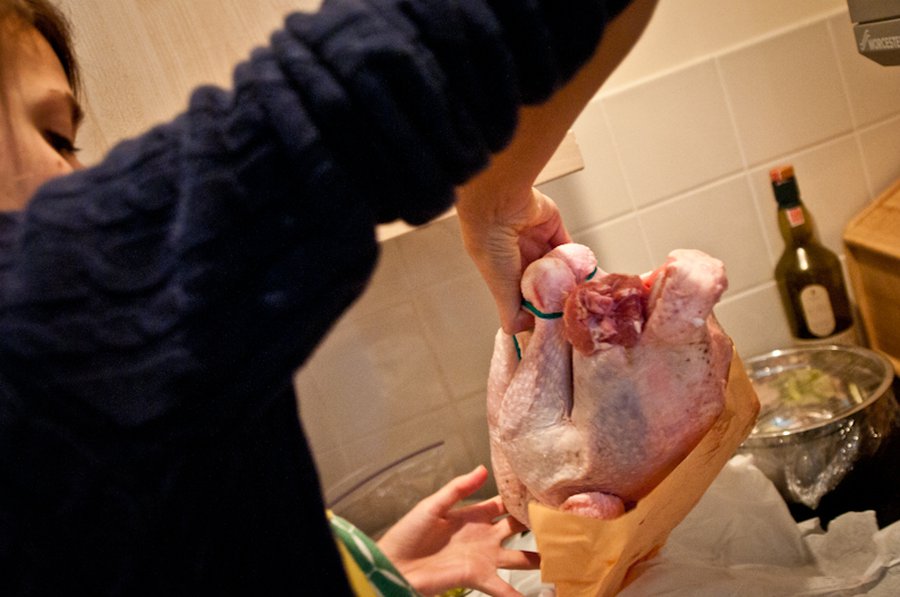 Looking away, I pulled and pulled, and it came free. Carrie said there were feathers on it, and feeling sick, I grasped it and spun across to the open bag still not looking. Apparently, as I went to drop it in, I nearly grazed Walker with the thing. I dropped the neck in, we both screamed, and he dropped the bag. The neck sat happy in its clean bag on the floor as we held onto the counter laughing. And then I found the giblets and said to Walk we don't need the giblets, right? (hint, hint) and he said we could do without them, and that was it. They were voted out. Exhale. But you better believe I watched over that turkey like a proud mama. 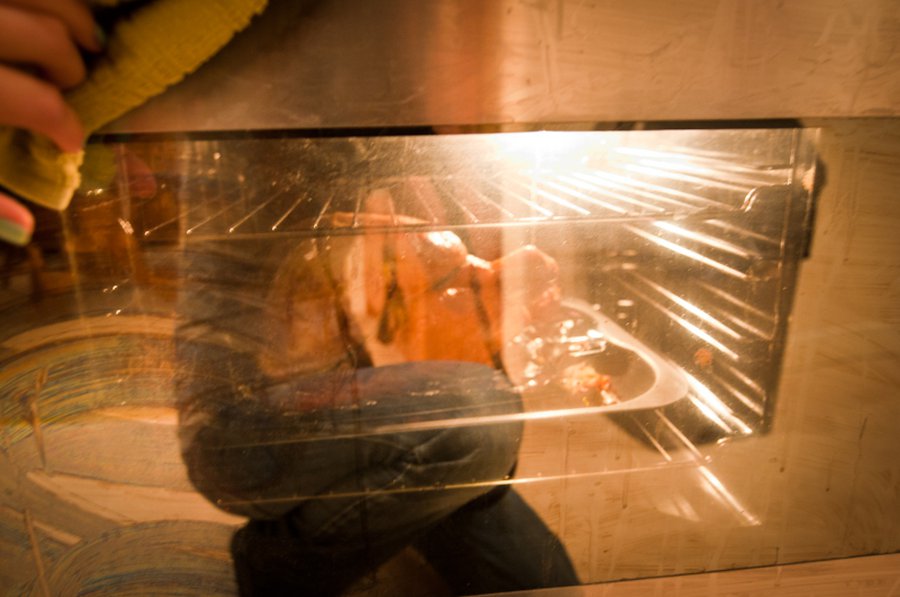 It came when my husband walked in the door with bags and bags from a long grocery run, and set up his cheese board complete with aged comte, my favorite of the night. Impressive, sweetie. 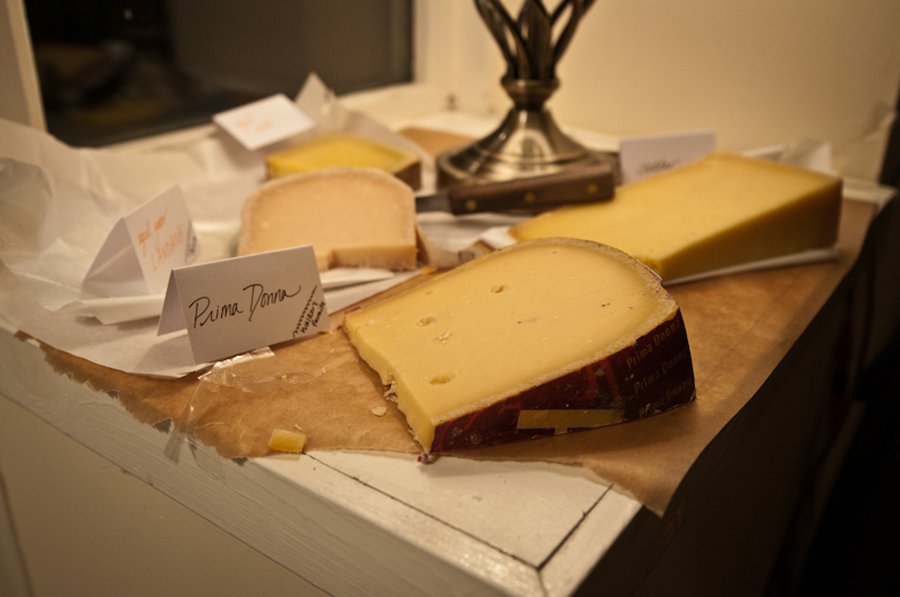 It came when the kitchen was jammed with food and I was rushing to ready the sweet potato casserole, taking the stuffing out of the oven, and stirring the gravy. Walk walked right into the kitchen with the champagne, and pop! champagne fountained all over the floor in a smooth, festive stream.

It came when we sat down with vibrant plates of goodness and dug in with friends. 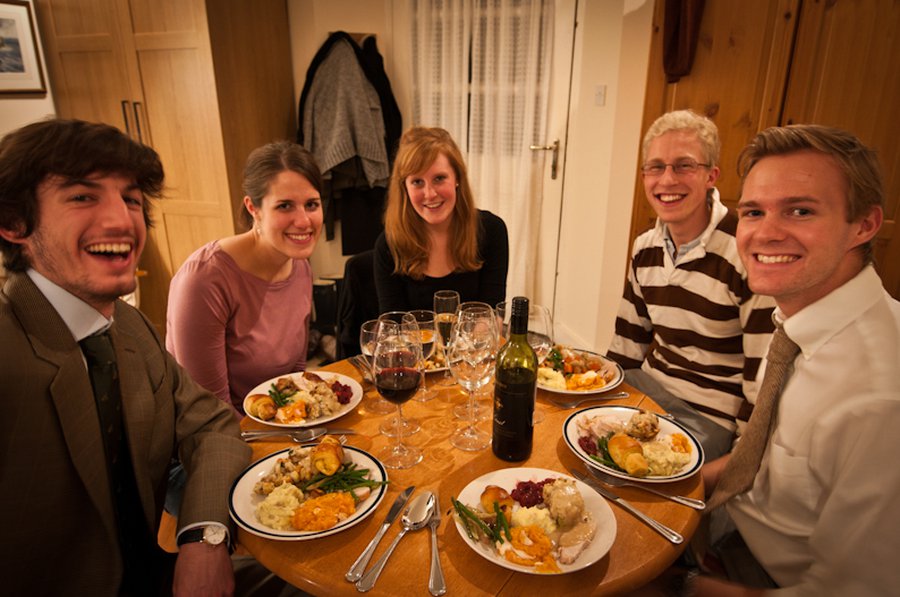 The menu was entirely traditional, with a few shallots and fennel bulbs thrown in. 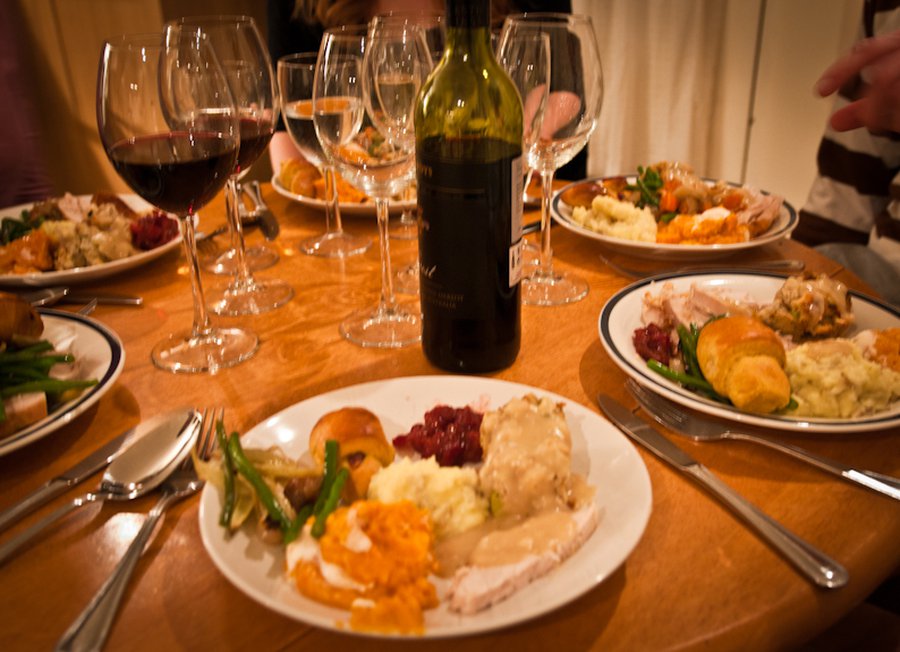 It came when we took an intermission from dinner, and walked outside into fat flakes which twirled around our breath clouds. And it came when old friends from three eras in our life blended as we marveled at the snow like we'd never seen it, like we were George Bailey. We couldn't bring the camera, but it's a Scottish holiday, St Andrews Weekend, here, and our intermission entertainment was seeing the Red Hot Chili Pipers, a pipe-rock band, as we've deemed them. It came with the helium balloons of the Scottish flag, and everyone singing the Scottish anthem together, and the band reverting again and again to celtic craziness. We're talking four massive bagpipers rocking out with drums and percussion. We danced and laughed, and Walk picked me up about ten times so I could see above the crowd.

Back home, it came in finger-lickings and time for my favorite pumpkin cheesecake. 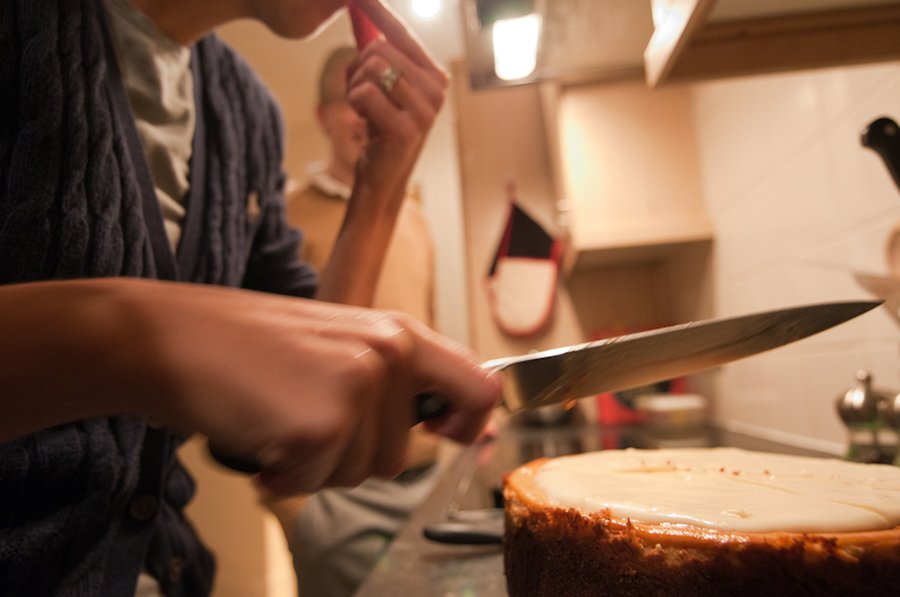 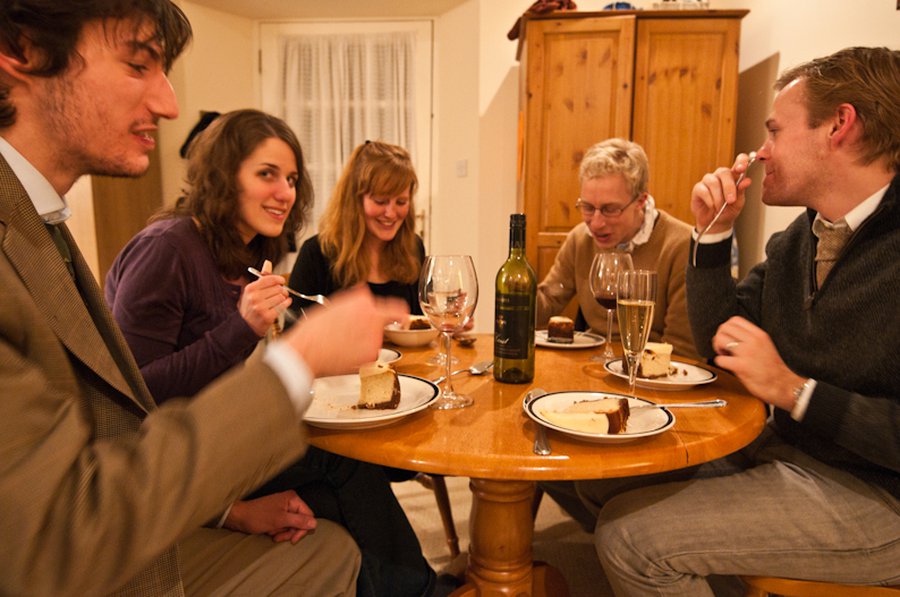 That was when we felt that full weariness, and crashed. The guests left, and while I loaded the rest of the dishes, my sweet husband washed the floor and took out the turkey carcass and scrubbed the oven.

This morning I came out to sunny snow and a soap-scented kitchen. 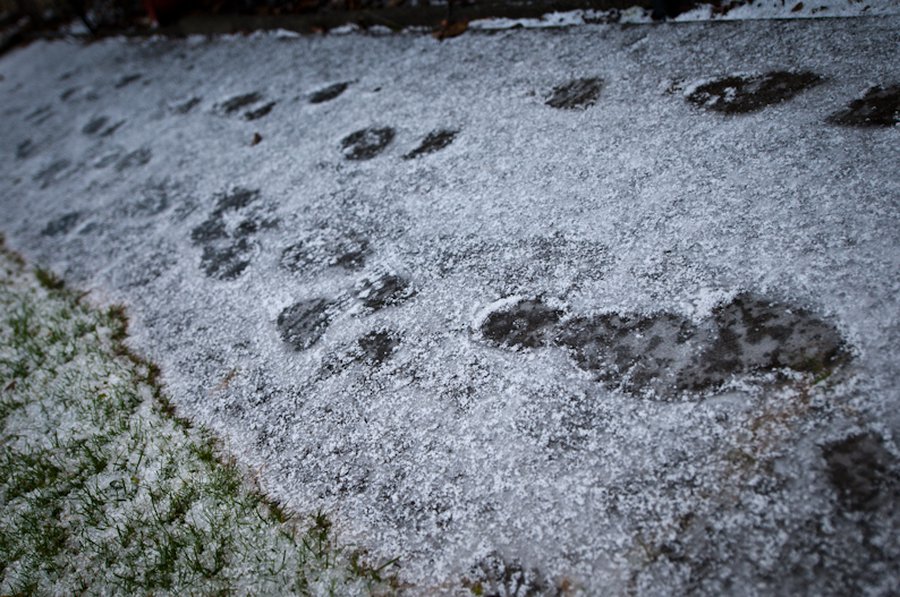 It is when happiness incarnates into something tangible right in the middle of your table. In all the burned fingers, slightly cooled foods, spills, and laughter, it found us.