The word that strikes instant adrenaline into any traveler’s heart? Schipol. We’ve spent a fat-apple-pie-slice of our married life in the Amsterdam-Schipol Airport, the layover destination of choice for Delta. When Walker suggested that we stay in Amsterdam for a few days after his parents left from our Italy trip, I braced for a world that I only knew by the airport.

Instead, we flew into an evening land of twinkling canals, copious windows, and stately canal homes. It's pretty! I actually like it! I said about forty times.

After the day in Keukenhof, the hubs and I stayed half a week in Amsterdam: we took a canal tour, and visited Anne Frank’s home and the Met of Amsterdam: the Rijksmuseum (rhymes with yikes-museum, but was surprisingly a yay-museum filled with model ships and Vermeers.) We walked through the Jordaan, the old Jewish quarter which are now the designer and quaintness avenues, and found a darling English tea shoppe. We went to the floating flower markets and ate waffles at the famous Albert Cuyp market (I was sure a pigeon or crane was going to swipe mine as the market was closing and they were swooping in!).

Walker practiced his Dutch and I avoided it; they mistake my husband for a Dutchman so he can get away with it.

Mainly, we evaded bicycles and sat at cafes: inside, outside, up a set of winding dark wood stairs for a view of the street. We left the cameras, held hands, and walked. And, per our favorite hobby (restauranting), we found lovely spots for dinner each night.

The city is quiet, and looking up into the open windows (hardly any curtains on the upper stories!) to see built-in libraries and polished dining rooms was an instant of calming beauty. Sometimes it's more fun to live without a camera, so although I'm not showing you much, I'll tell you from my eyes darting around to capture it all: Amsterdam was a charm. 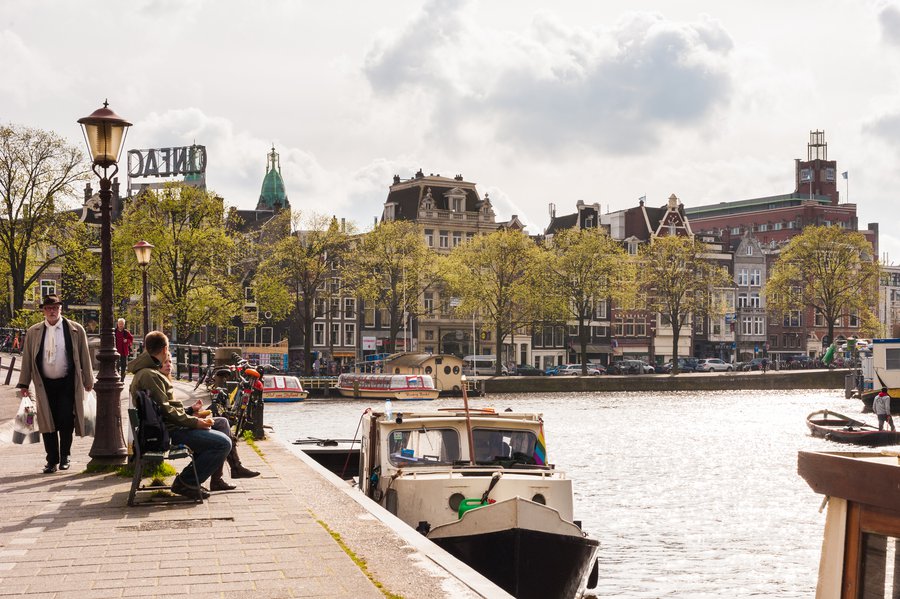 Schipol doesn't do it justice.