From the far north, we drove back down and onto Kunoy island. The roads were thin and straight along the cliffs, but provided stellar views of our next destination, the island of Kalsoy which runs almost parallel to Kunoy. 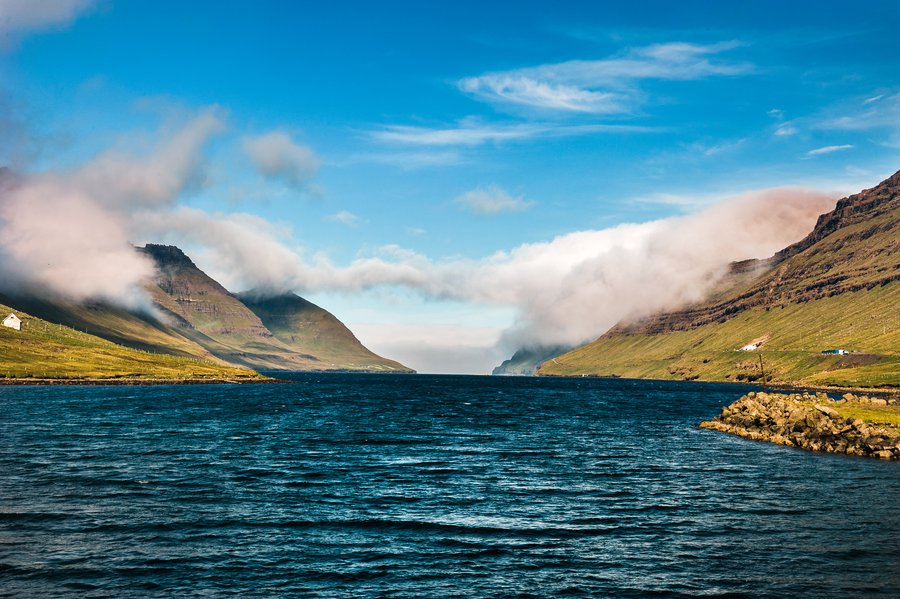 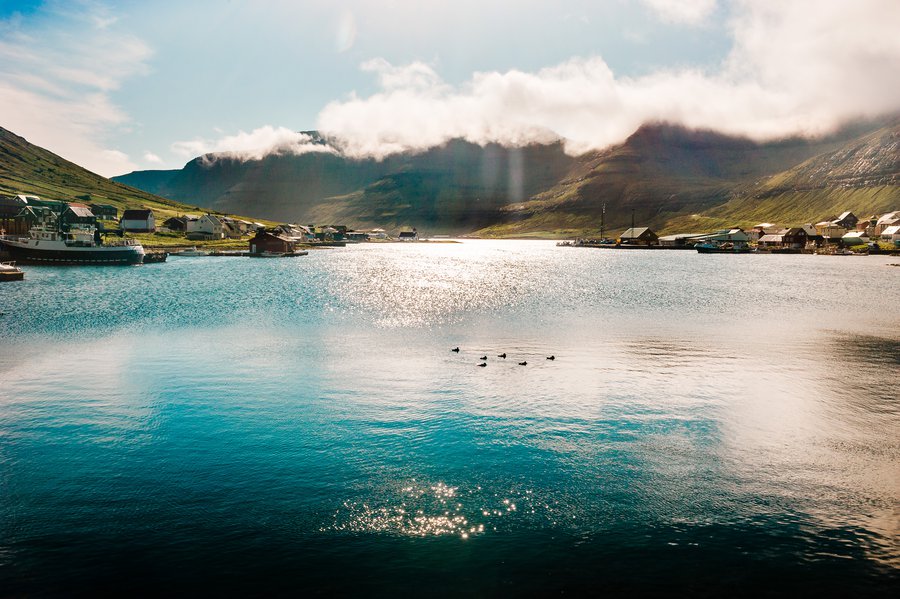 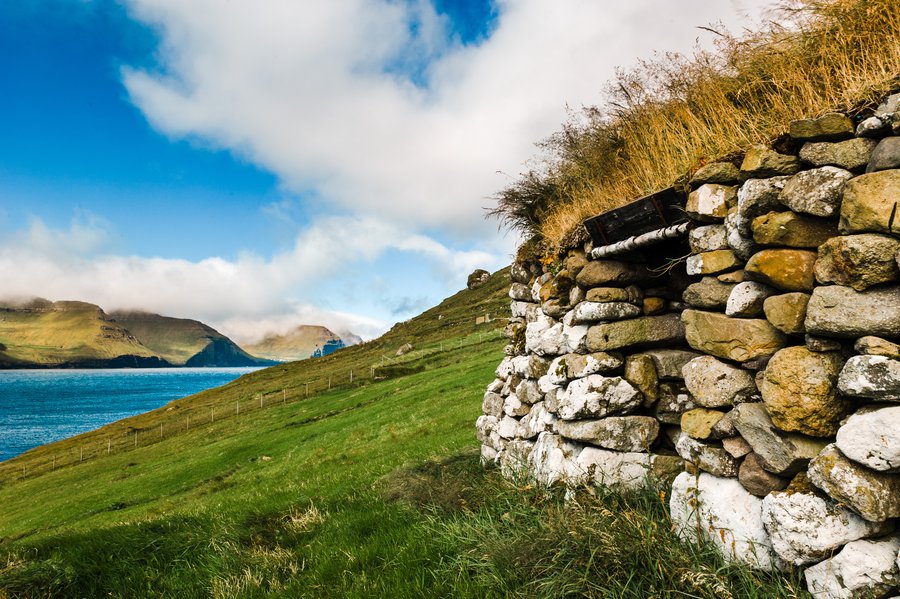 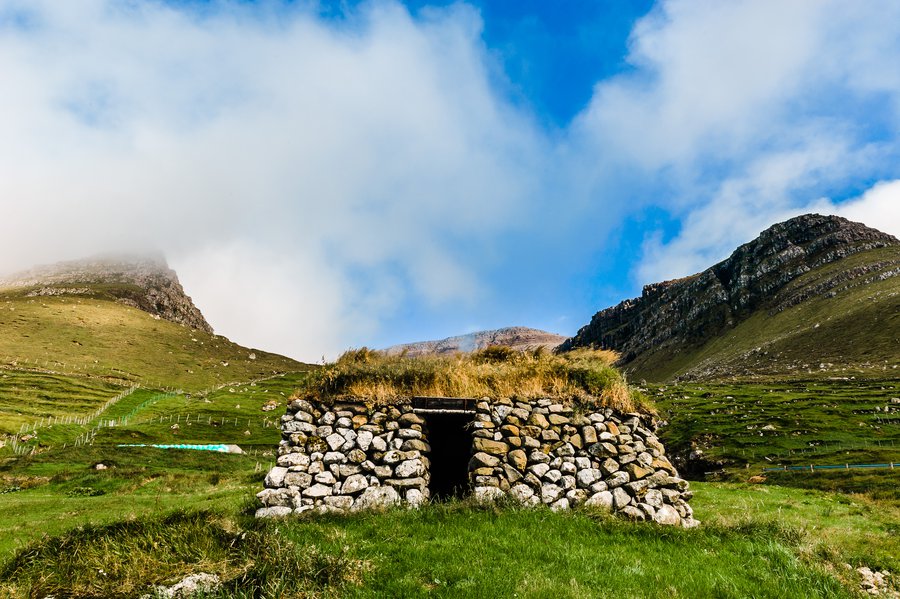 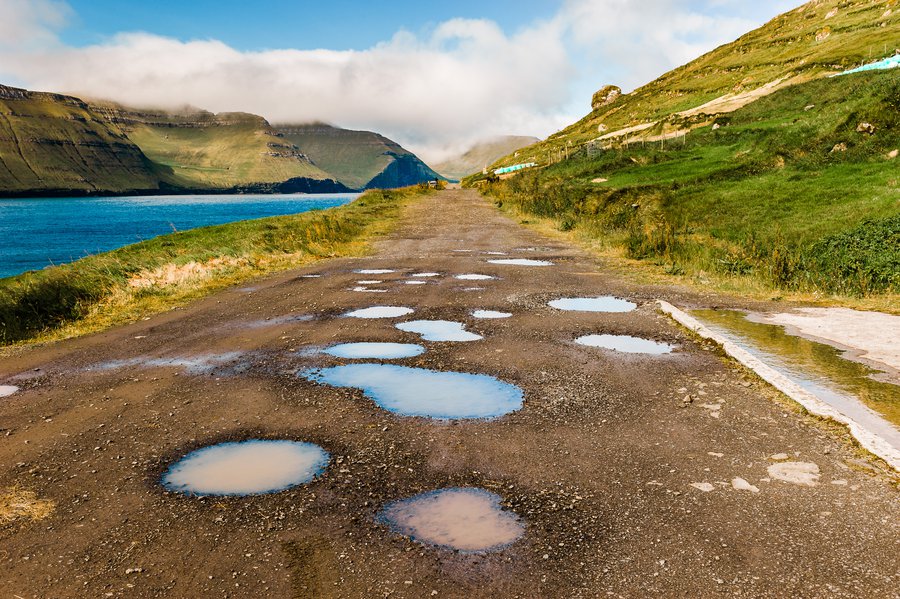 Our last stop of the day was one we had planned for weeks and were building up courage for: a hike to the Kallur lighthouse on the peak of Kalsoy. The most common and striking photos of the Faroes are often taken on this hike, including the Faroe Islands Tourism Board site's home page. The plan was to take the ferry and in the few hours before the last ferry of the day came, we'd drive to the end of the island, hike as far as we could, and rush back to the ferry. We knew the timing would be tight.

We caught the ferry from the town of Klaksvik on Borðoy. As we pulled into line and saw this little boat, we thought no way. 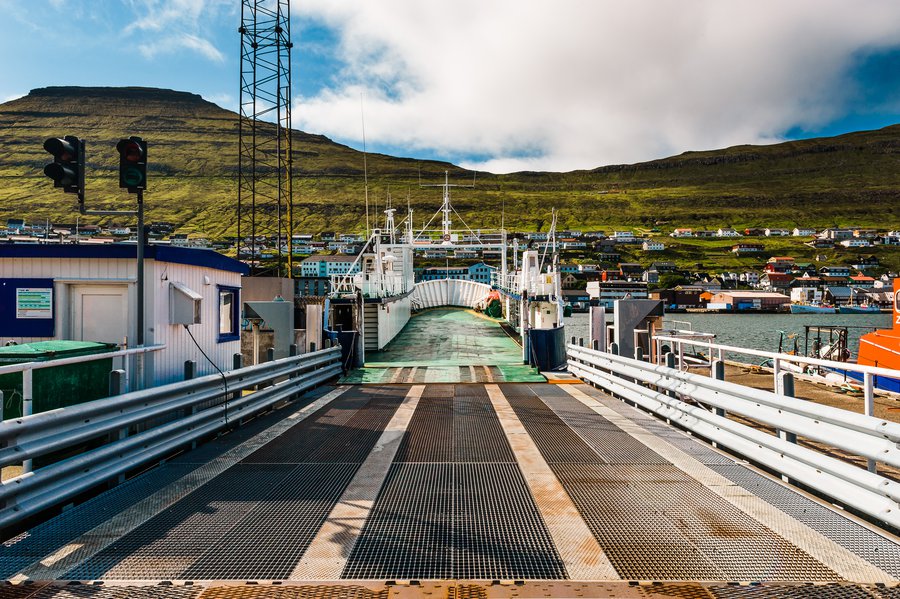 Yup. All you have to do is pull in your side mirrors, and get pencil-close to the next car. 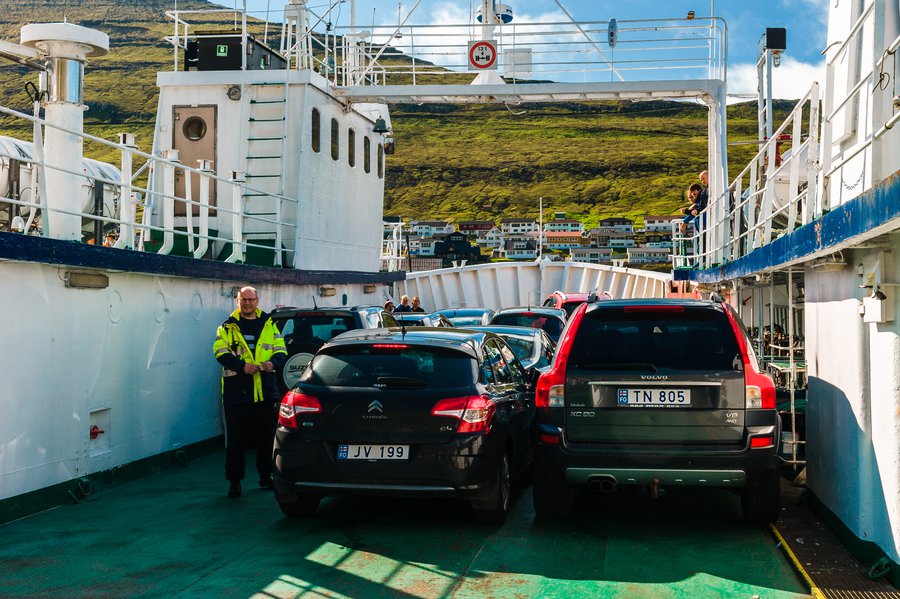 Somehow, they squeezed 18 cars on, and we stood on the sides as we crossed over to Kalsoy. Props to Walk for his mad manual driving skills! 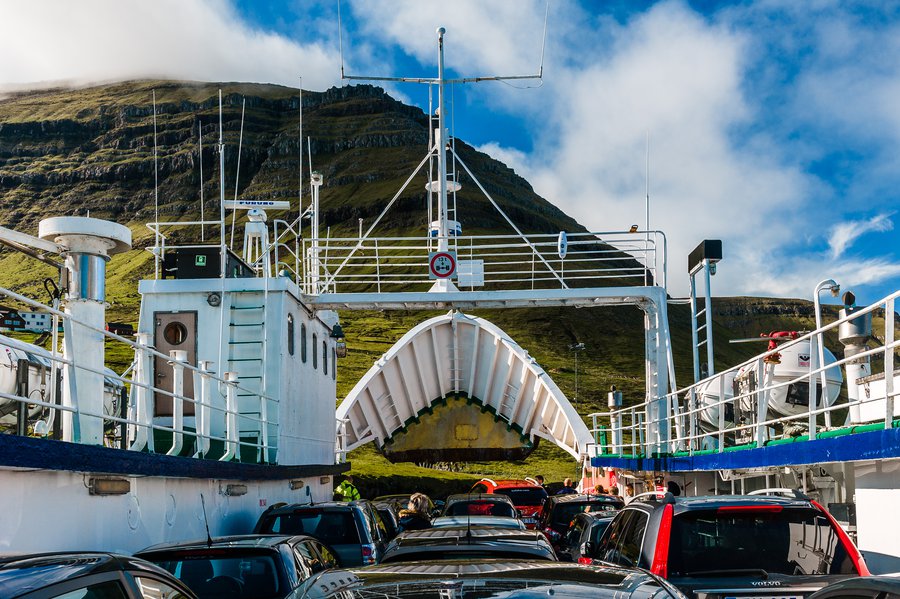 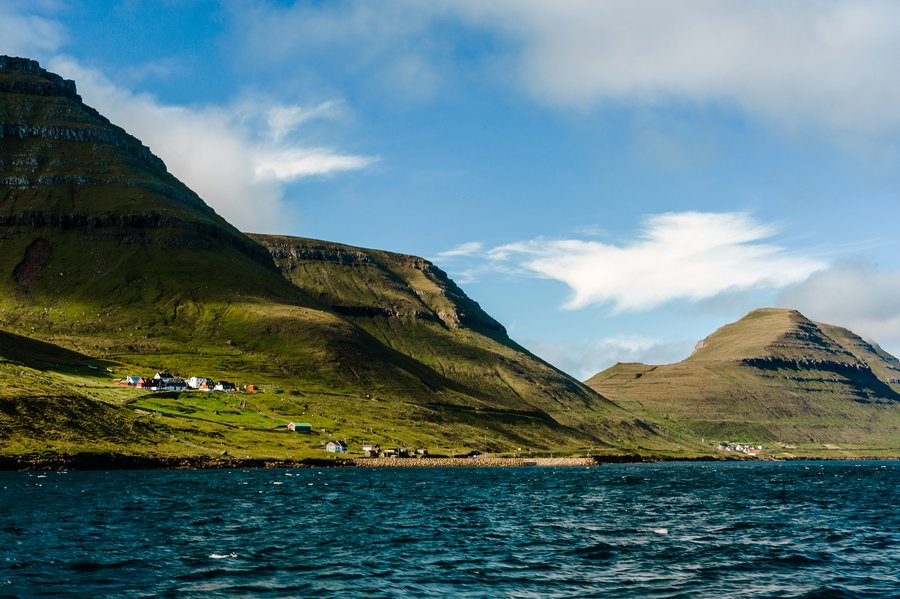 The views from the ferry as we sidled up to the town of Syðradalur, which was basically only the ferry terminal, made me feel like I was in a dollhouse world, so small, floating in the middle of nowhere. 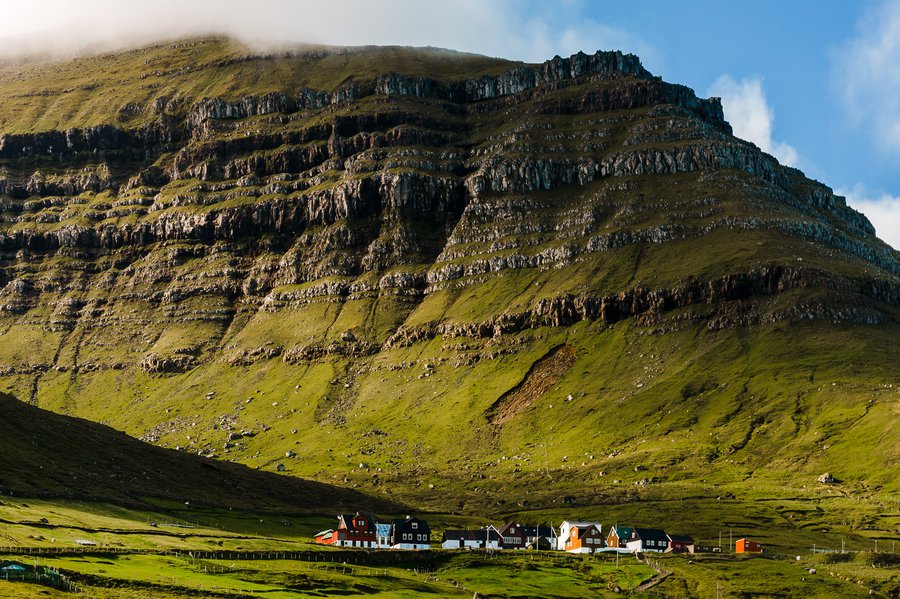 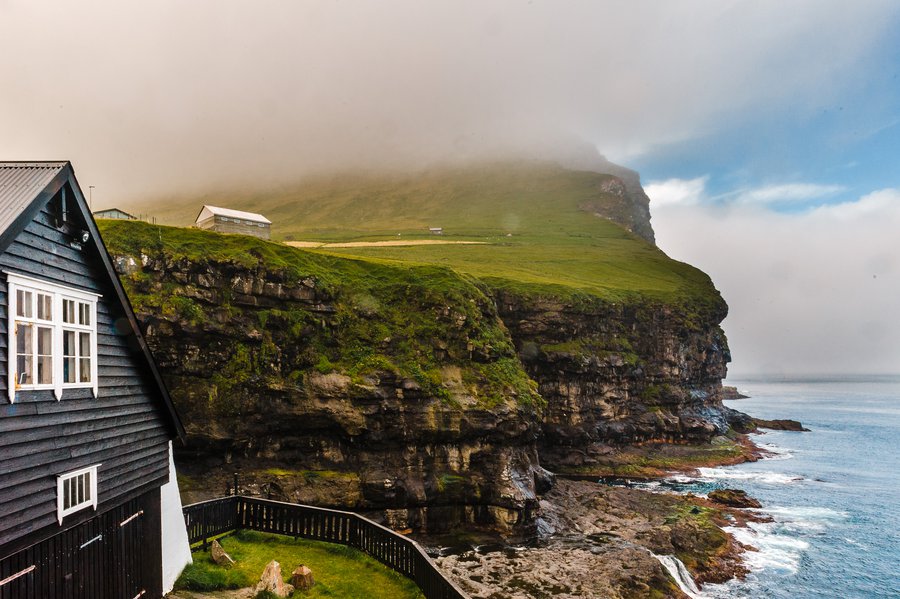 Kalsoy had four towns, which house under 100 people: Syðradalur, Mikladalur, Húsar and Trøllanes, and each town was between the humps of massive mountains. The island is long and slender, and a single road winds through 4 tunnels to each end, cutting straight through the mountains. 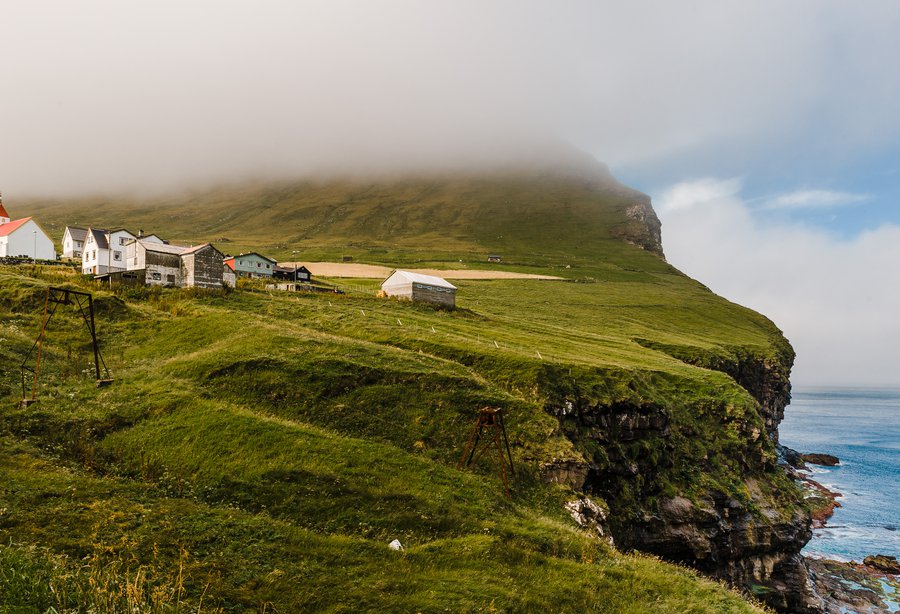 So you know I'm not exaggerating, I'm going to quote trusty Wikipedia here: "The northernmost tunnel through to Trøllanes is narrow, cold, damp and over 2 km long; it is rarely used by vehicles since the population of Trøllanes is only 20." No kidding! My nails were digging into the seat of the car and I would breathe again when we passed through the tunnels. 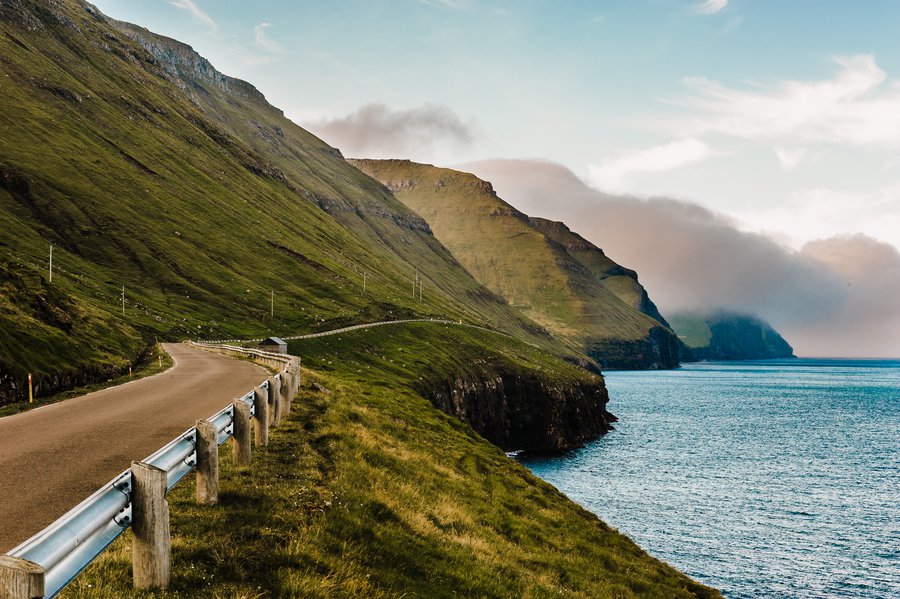 The day was bright and sunny, so we had kite-high hopes for our hike. We entered the last mountain that would bring us out to our hiking destination and came out into thick mist, rain, and vicious winds. If you look at the above photo, you can see that we should have predicted this. Since the hike was steep and from our parking spot in Trøllanes, we couldn't even see the mountain, we both decided it would be completely unsafe. I was equal parts frustrated and relieved as I sat in the car being rocked by the winds.

Due to our thwarted hike, we had some time to explore each of the other towns on the island, which we hadn't anticipated.

Mikladalur was where everyone we'd come on the ferry with headed. Home to the famed legend of the Selkie, Mikladalur had a statue of a seal woman taking off her seal skin, and all the Danish tourists were enamored. We forgot to shoot the statue by the water, but instead caught the falls over the town's cliffs. 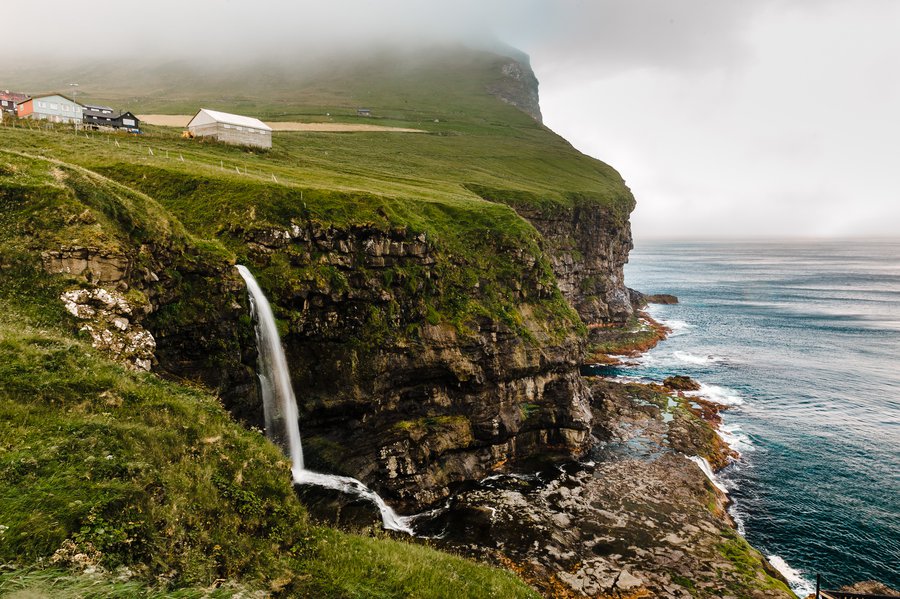 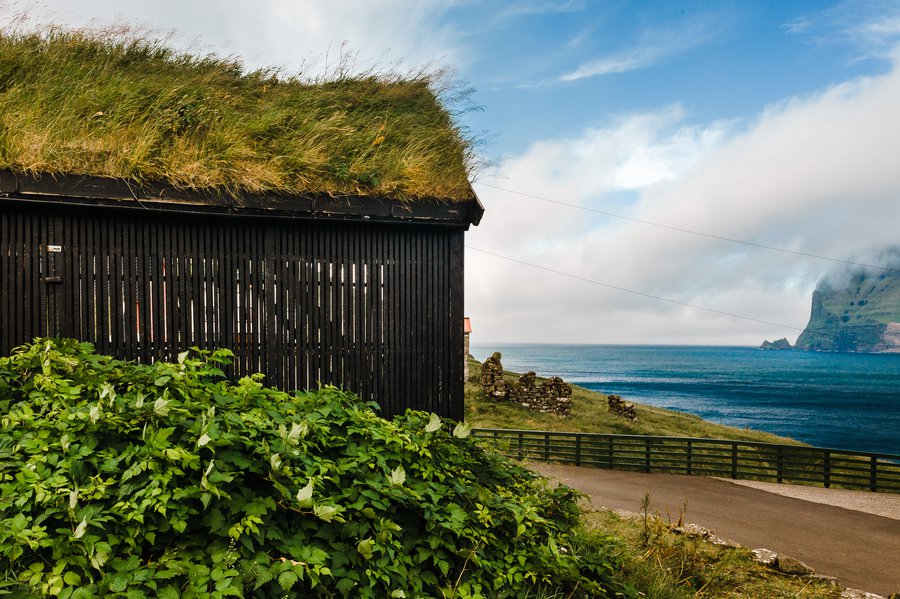 Here's the view back toward Kunoy from Mikladalur. 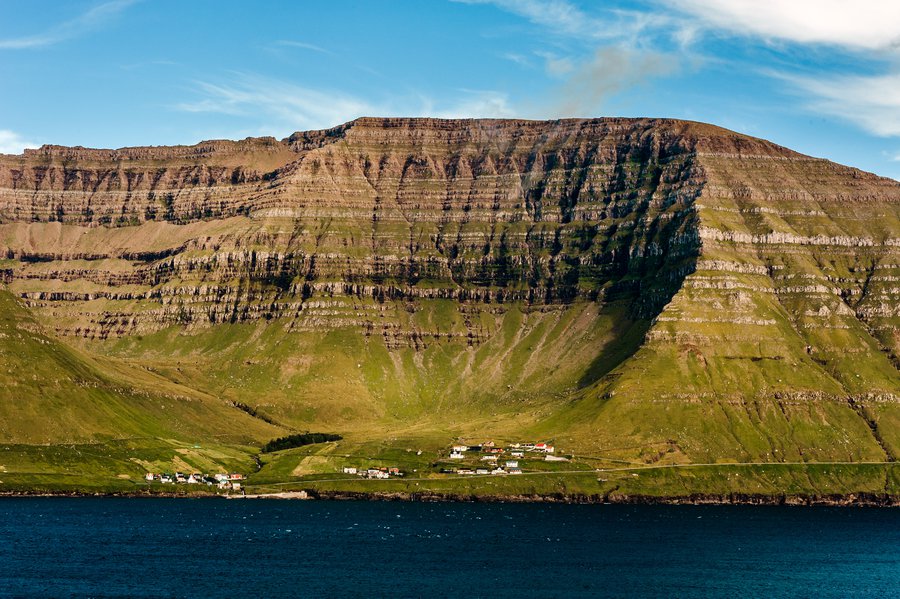 We headed back to the ferry terminal a bit early, just as the sun was singeing our path yellow. 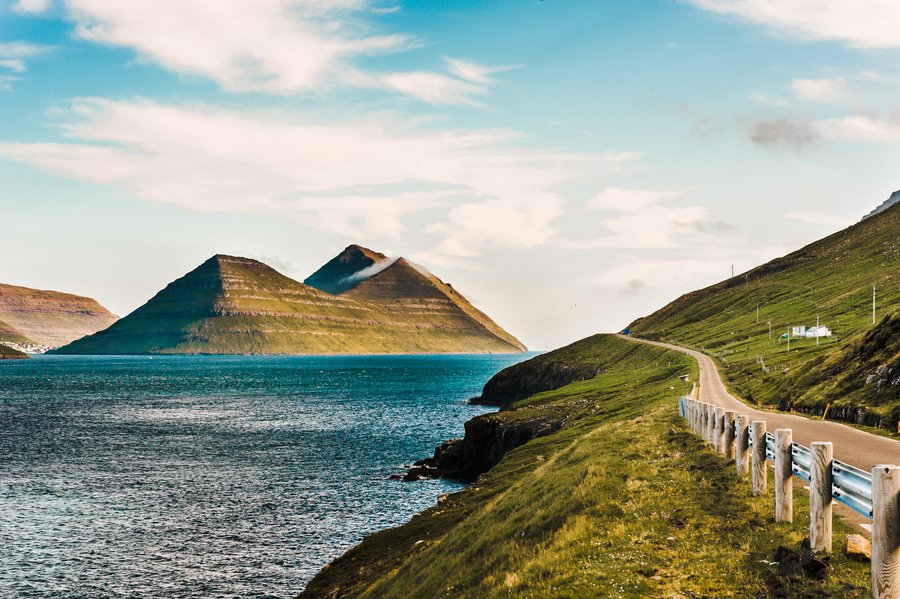 Ahead, you can see that even the diminutive town of Húsar had a church, with a red roof right by the sea. 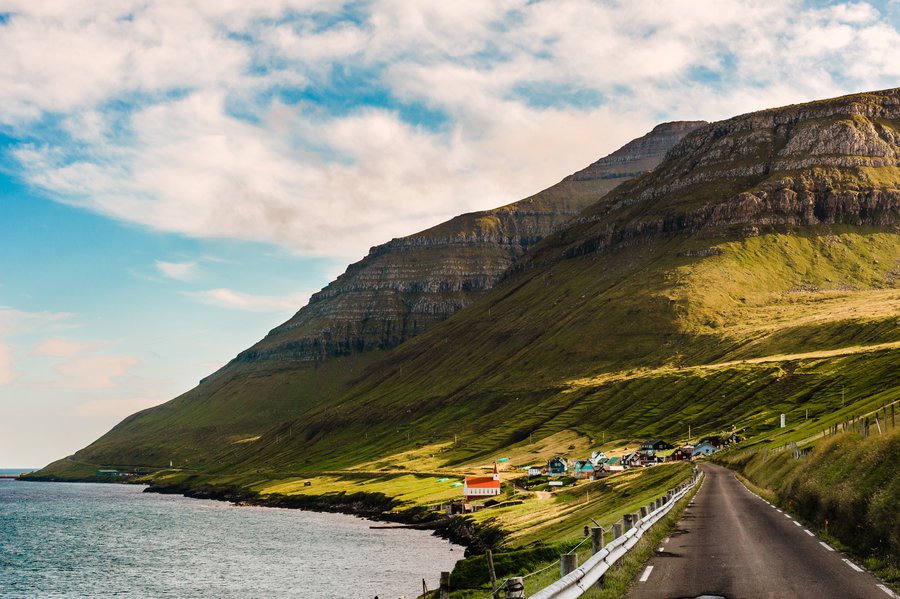 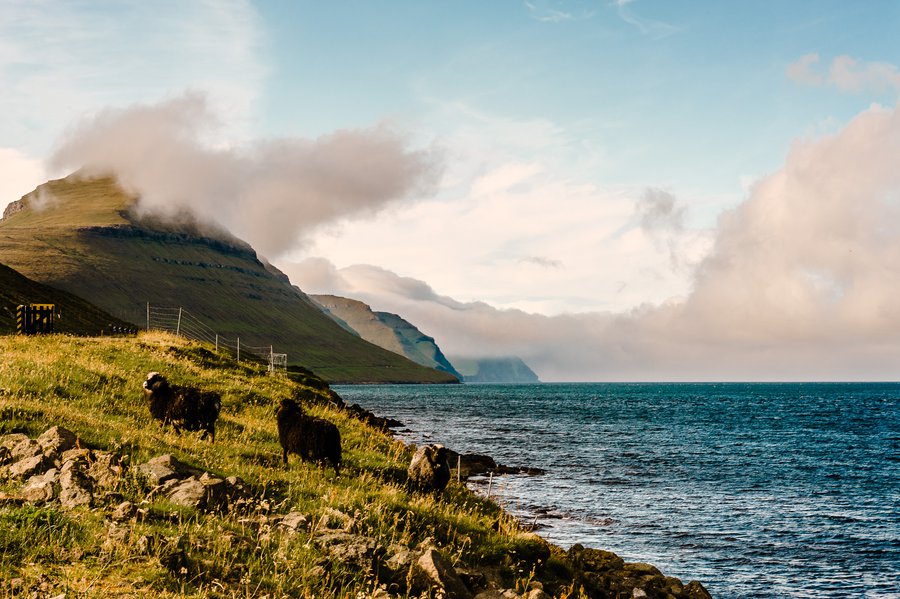 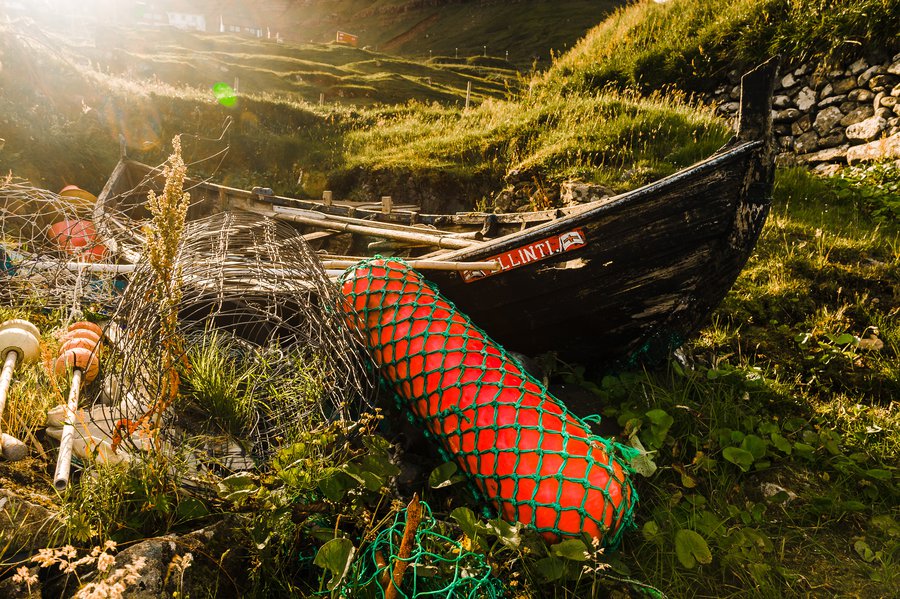 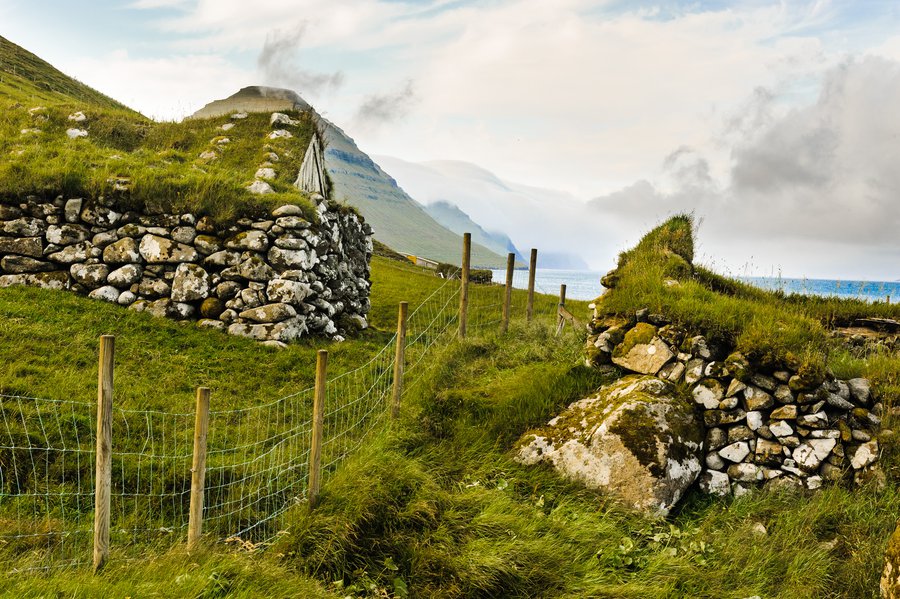 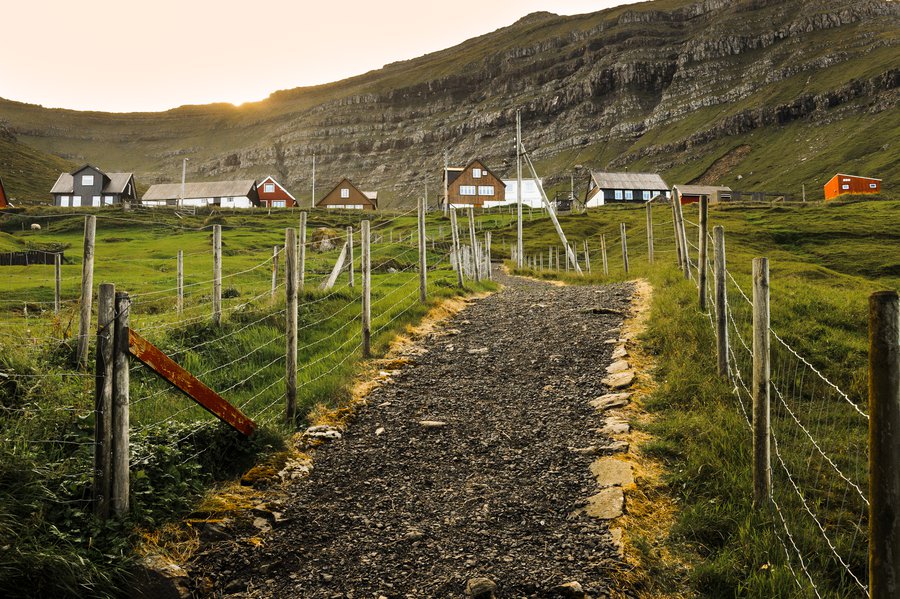 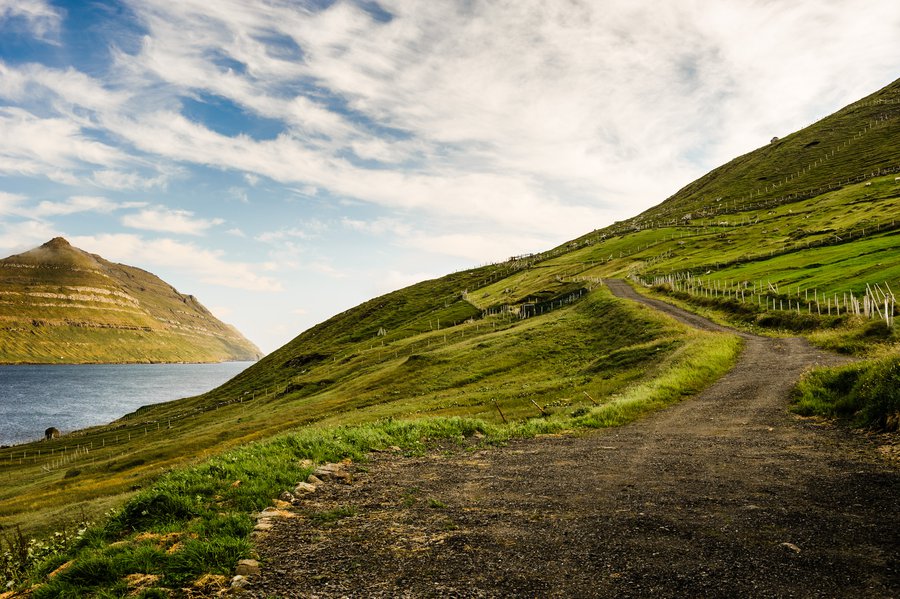 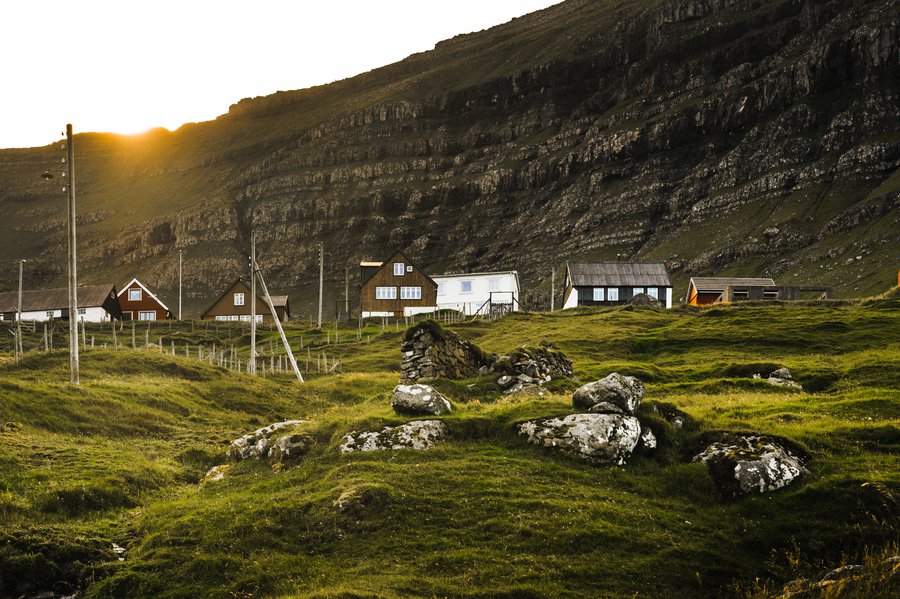 We squeezed back onto the ferry, the air a bit cooler, and watched Kalsoy shrink into the distance. 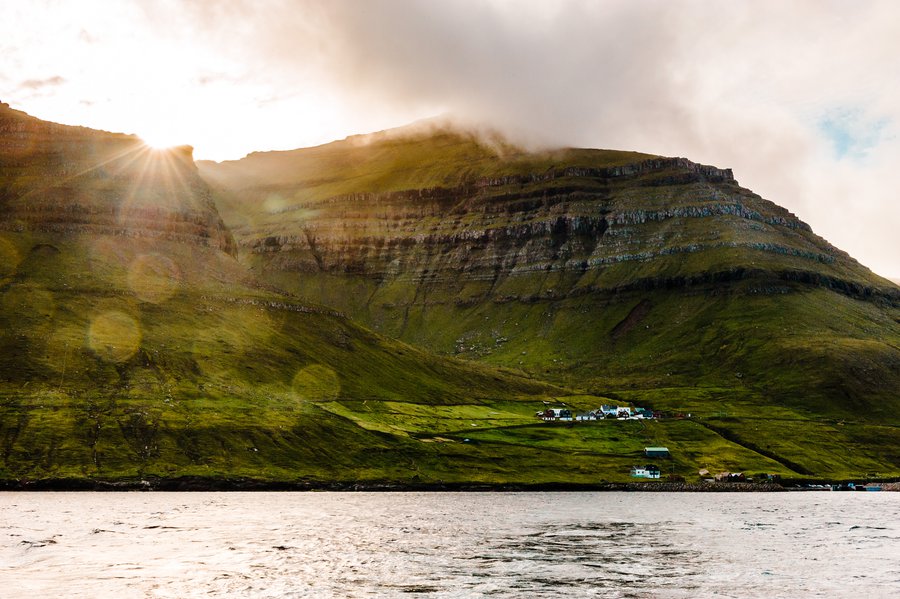 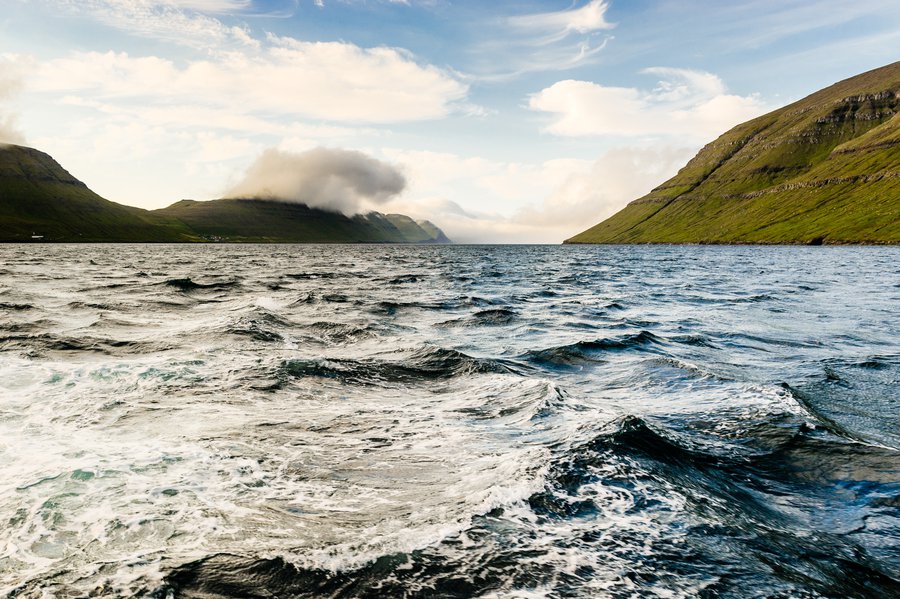 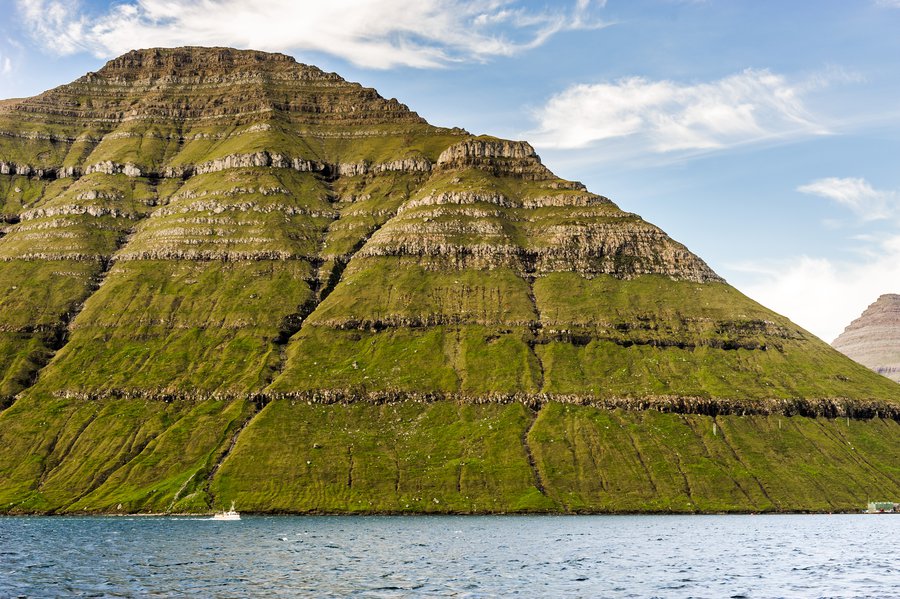 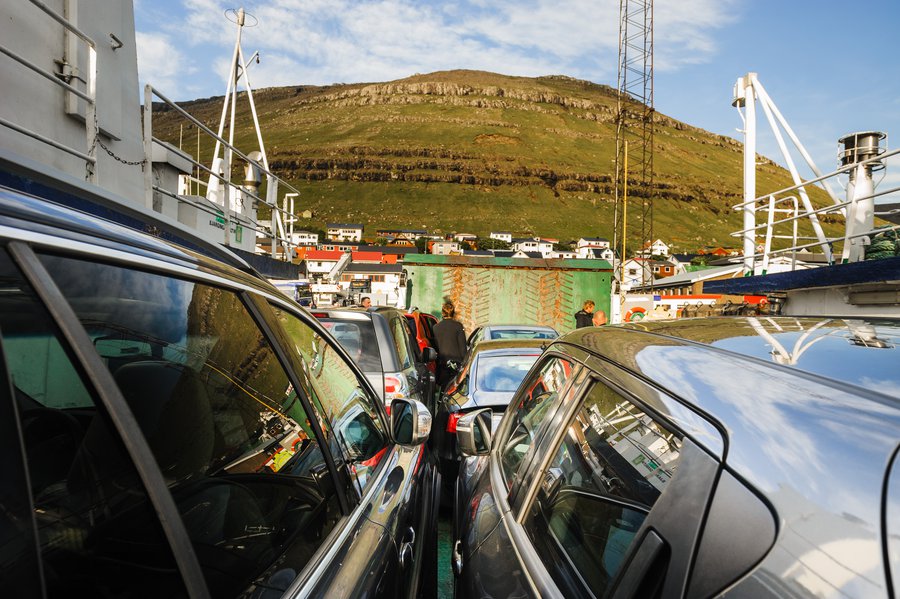 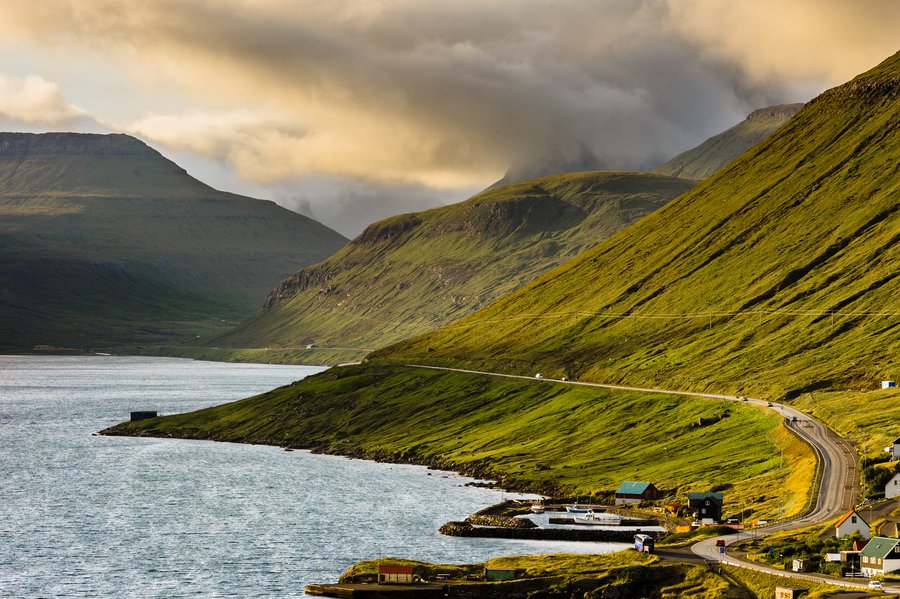 The world of the Faroes rushed bold green, then soft gold, all with fierce winds and hundreds of sheep.