Back to our morning on the boat, the highlight of our travels through Cinque Terre! 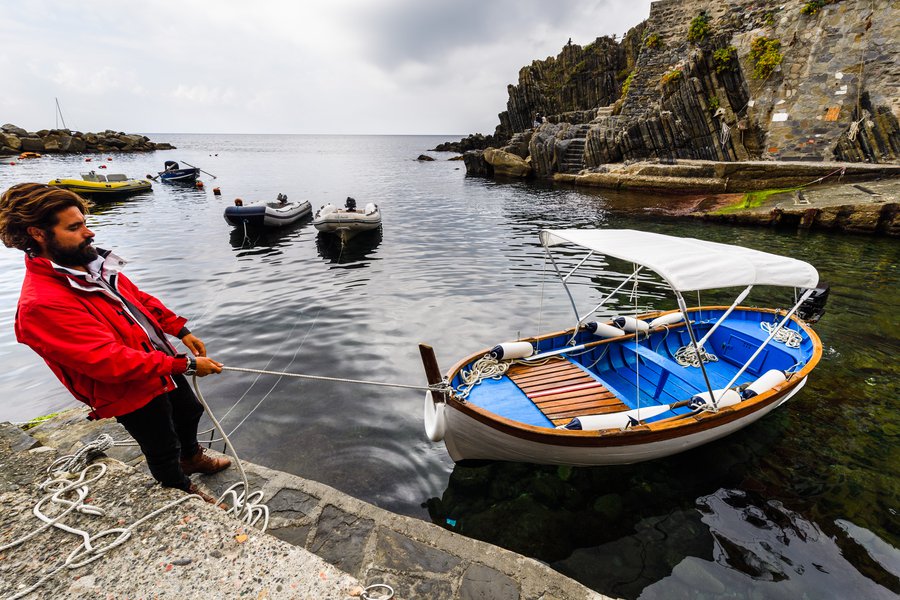 When my mother-in-law mentioned we'd like to take a boat, Stephano, our hotel owner, told us we might not find one this late in the year but to head to the harbor to see. We took the train from Monterosso (home base and the northernmost town) to the southernmost of the five, Riomaggiore. The train announcements sounded like rio-ma-CHEE-or-ay; love how they drag out the vowels. 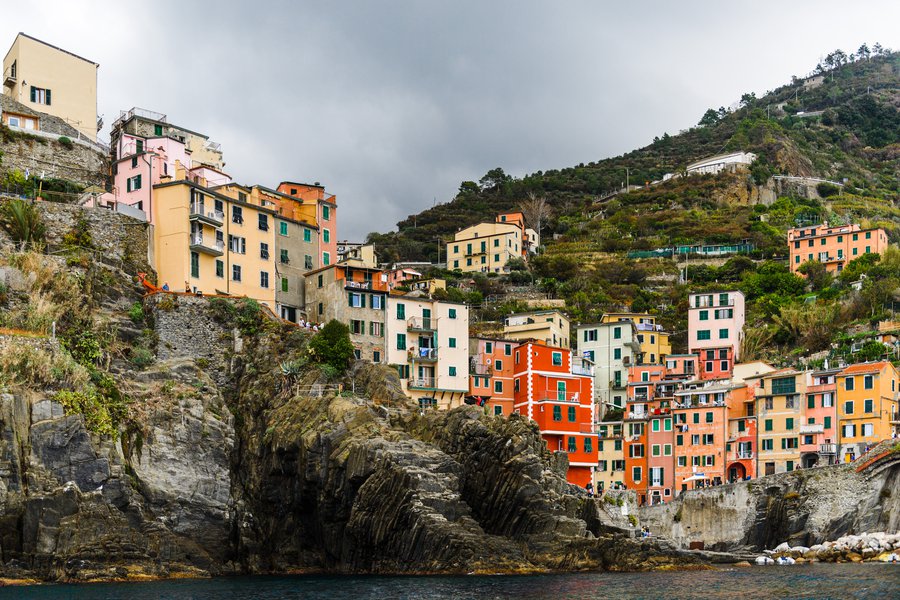 We walked down to the harbor, just in case and saw a sign on a house for boat tours, which we tried to head toward, but were blocked by the long process of these guys carrying a boat up through the streets. And then! We noticed one of the guys carrying to boat's shirt said 'private boat'. 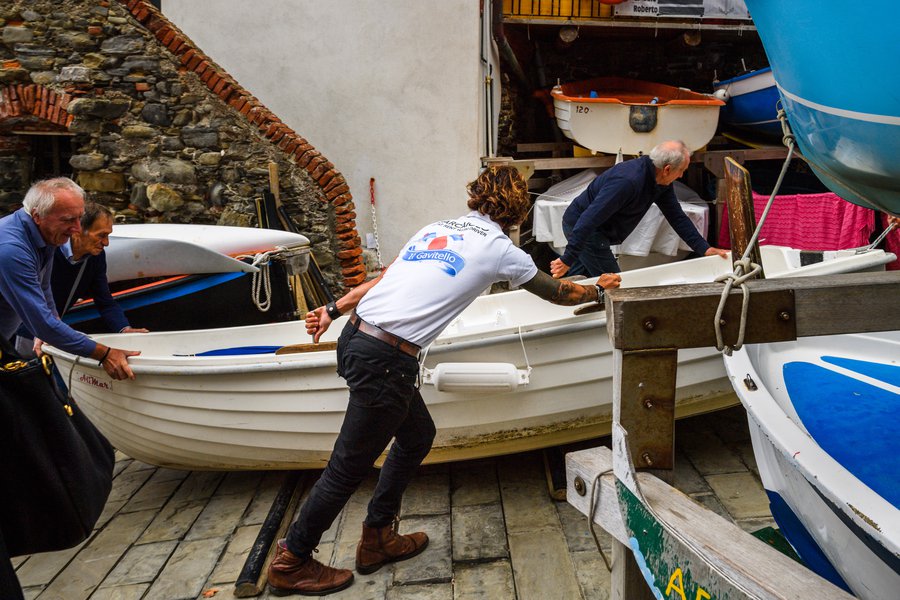 Jan asked him what our options for a tour might be, and he said "Your option? I have a boat down there" (pointing), "and we start here and go past all the villages to Monterosso. It takes an hour, and it is the best view!" Done. We stepped into his white boat with a bright blue interior and scooted off just like that! 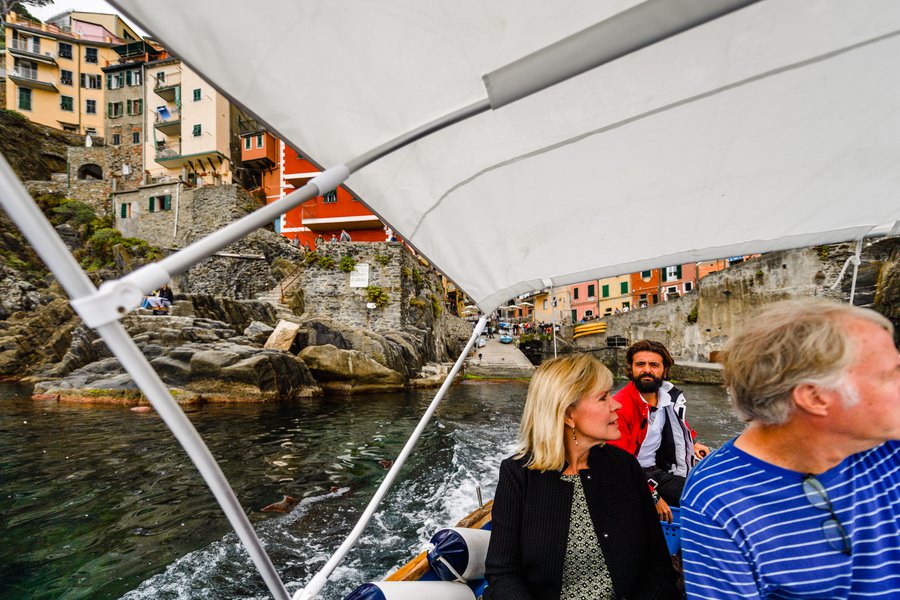 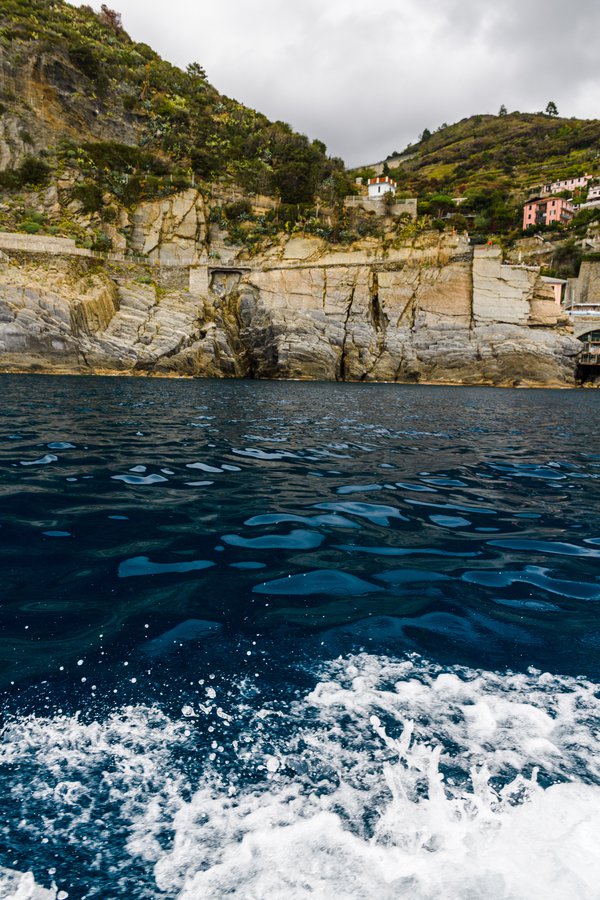 The weather was cool with hints of sun, and water dazzled teals and royals, similar to Greece, where it seemed someone had dropped dye into the sea. Our guide, whose name we never learned, told us the origins of the town's names, many from Roman roots, as we passed each one. 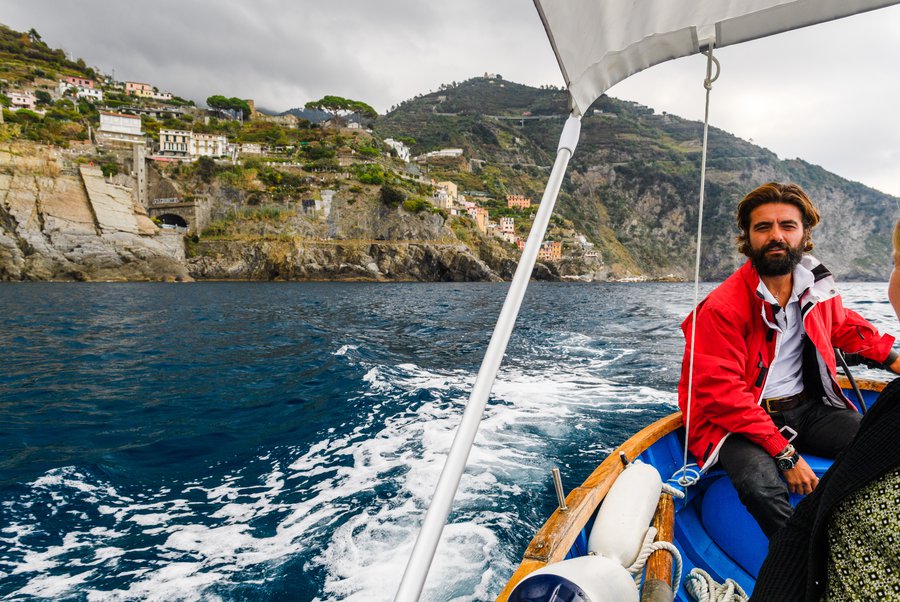 We reversed out of the port of Riomaggiore, and headed north toward Manarola; here she is from backstage. 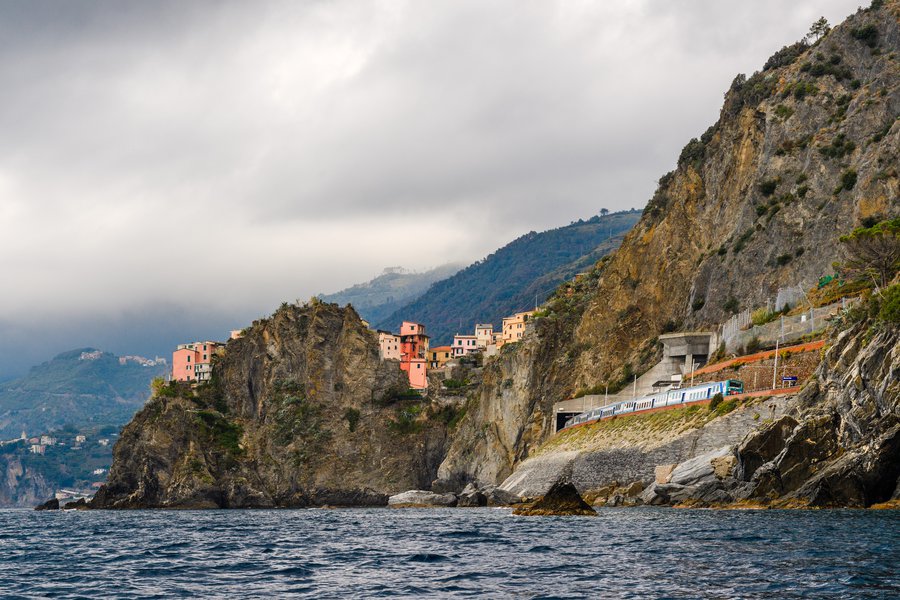 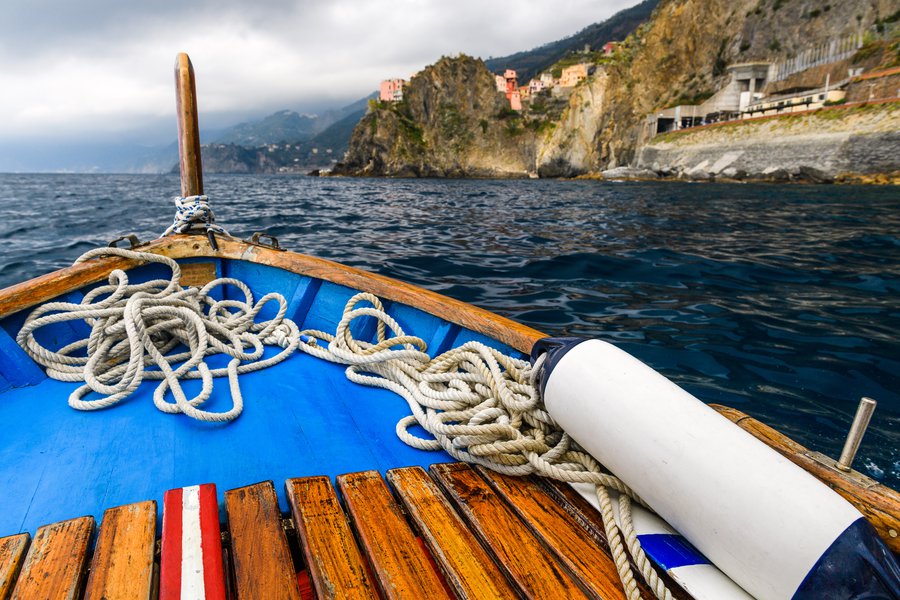 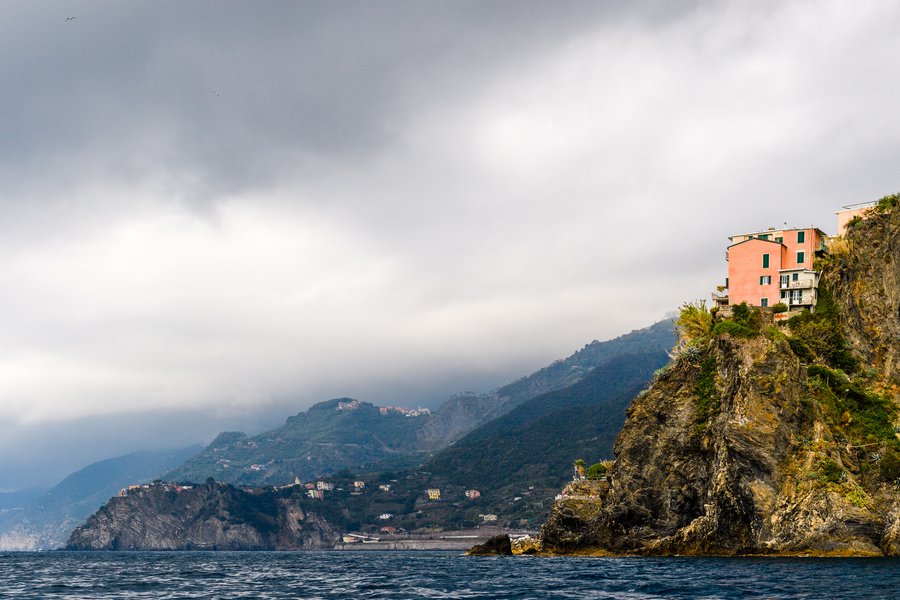 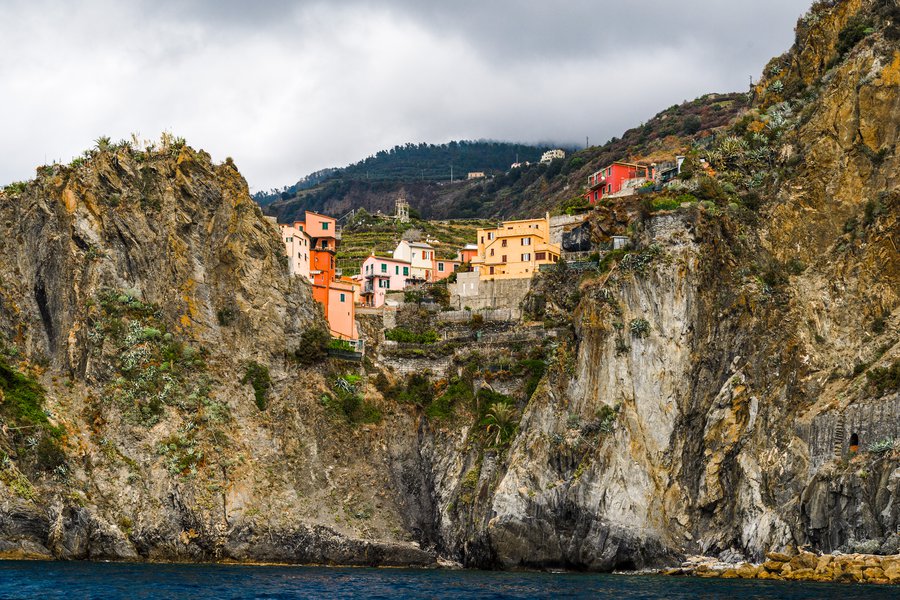 Seeing the villages from the town streets was charming, but from the water, it was outrageously stunning. I know some of these photos are similar, but every view, the entire time we smoothed over the waves, took words away, 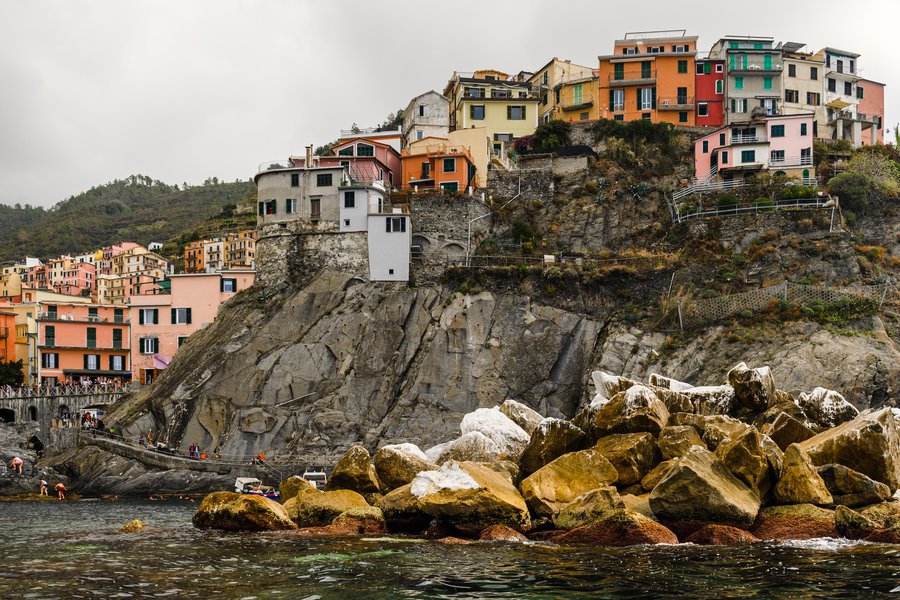 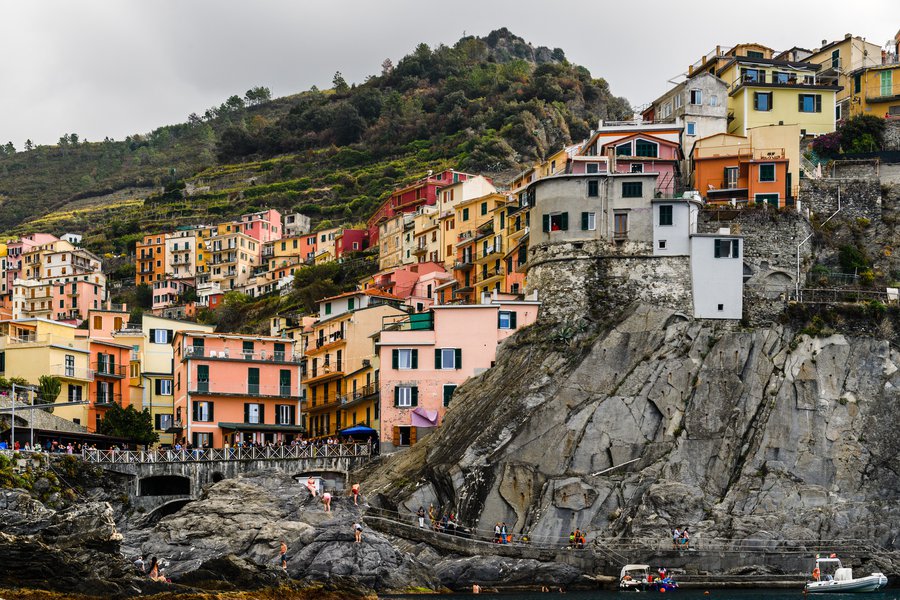 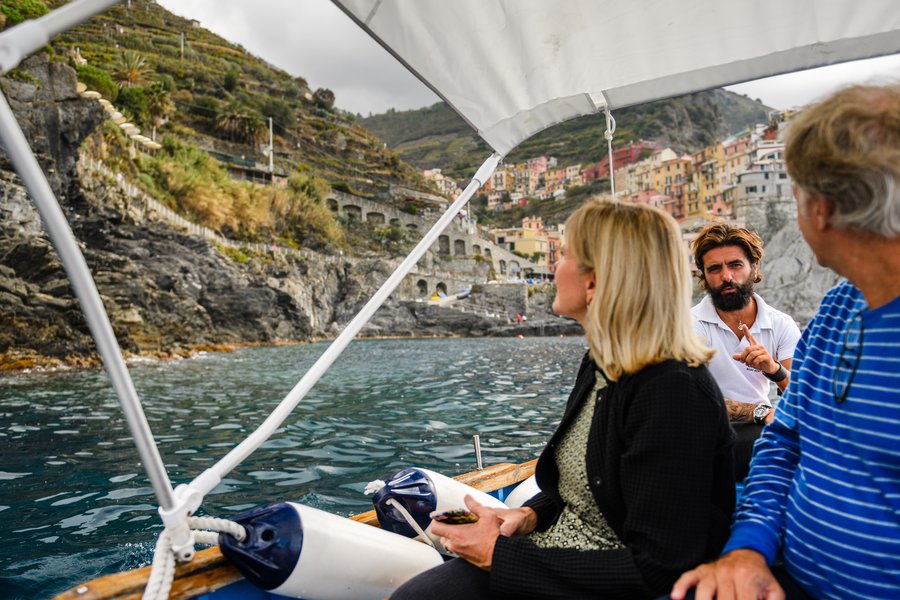 the way the towns dipped into the bright waters--unreal. Here's Manarola from the front, now! 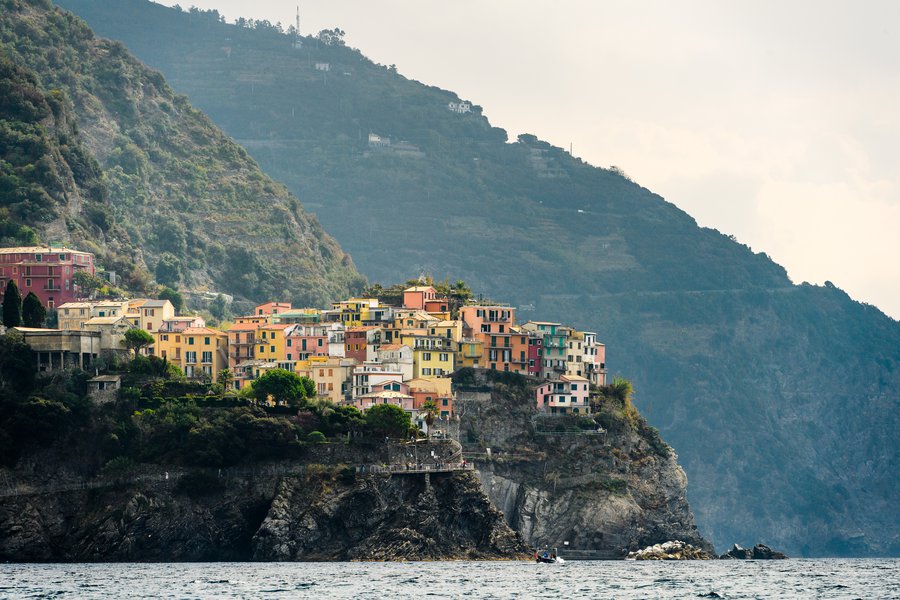 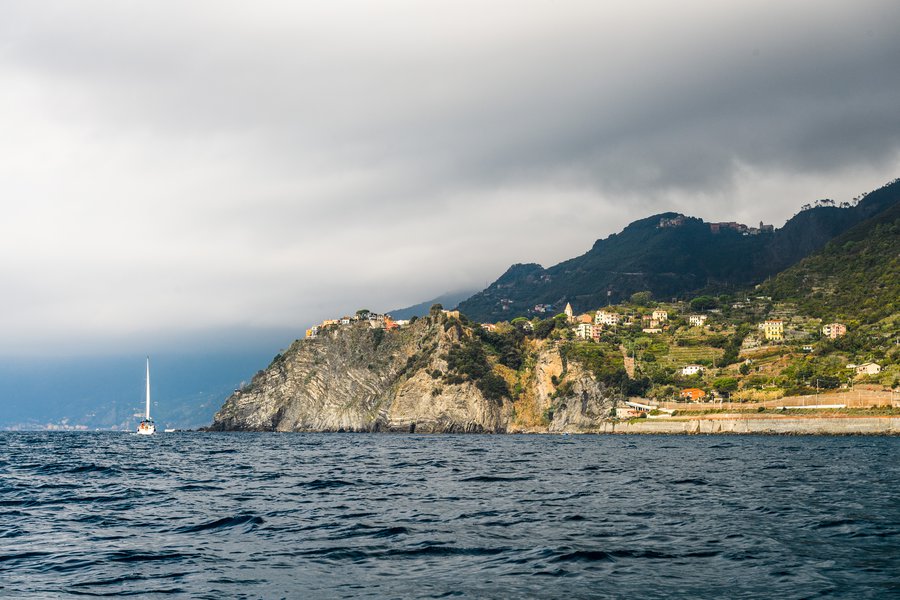 Skimming the water, we found a surprise: the villages weren't the only stars; the rock faces with their whorls and striations were incredibly beautiful, too. 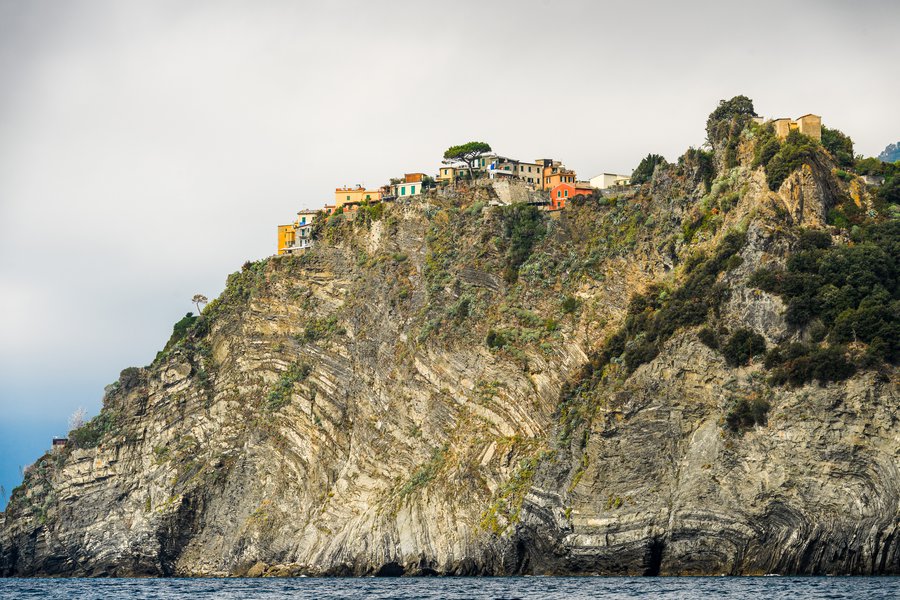 And that color! Can't get over it. 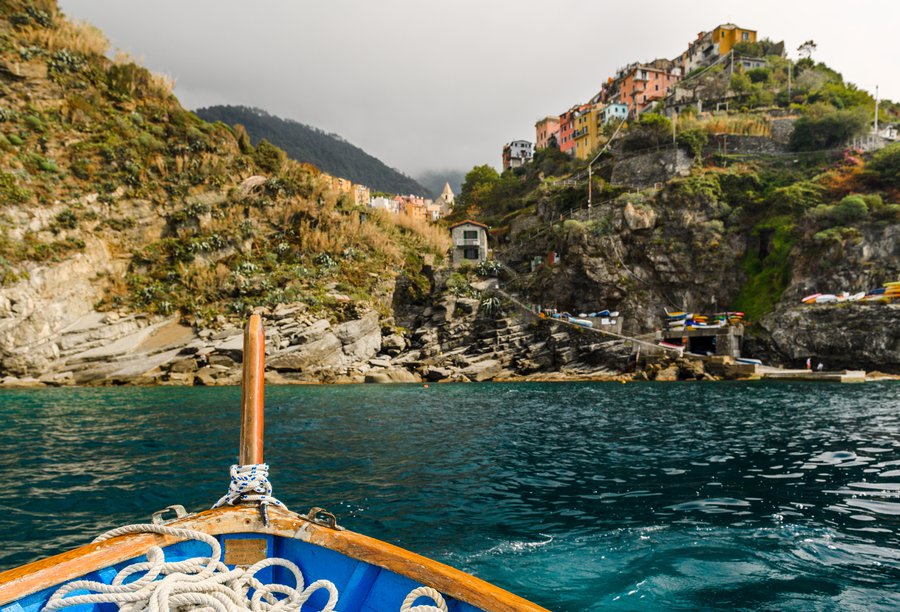 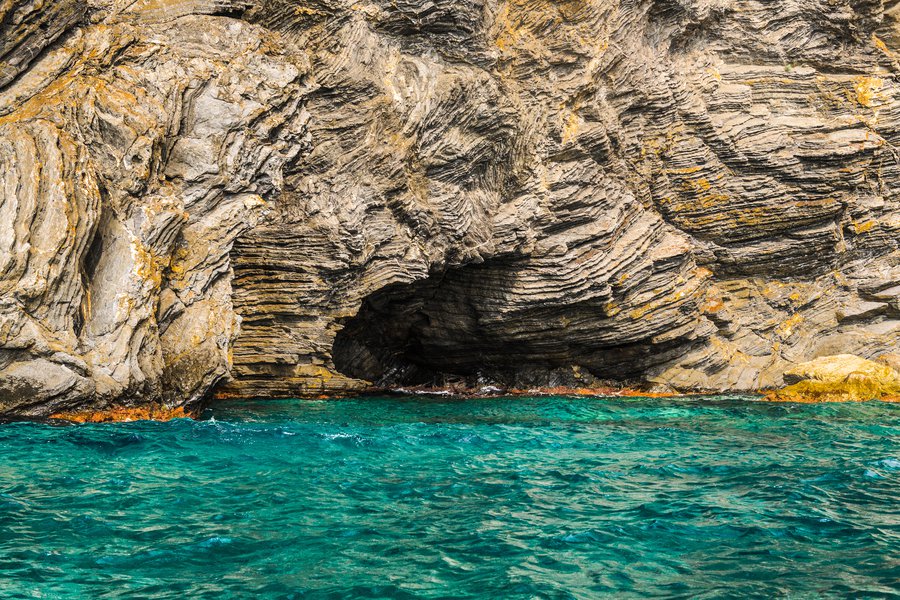 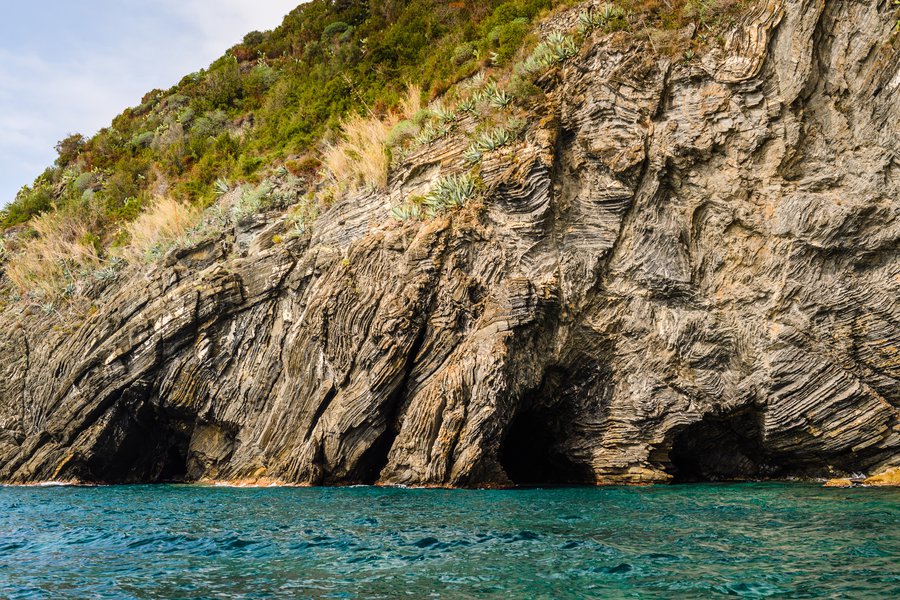 We explored four of the five (cinque) terre villages on foot, but the one we skipped was Corniglia, perched highest on a nest of hills above. Here she is by water. 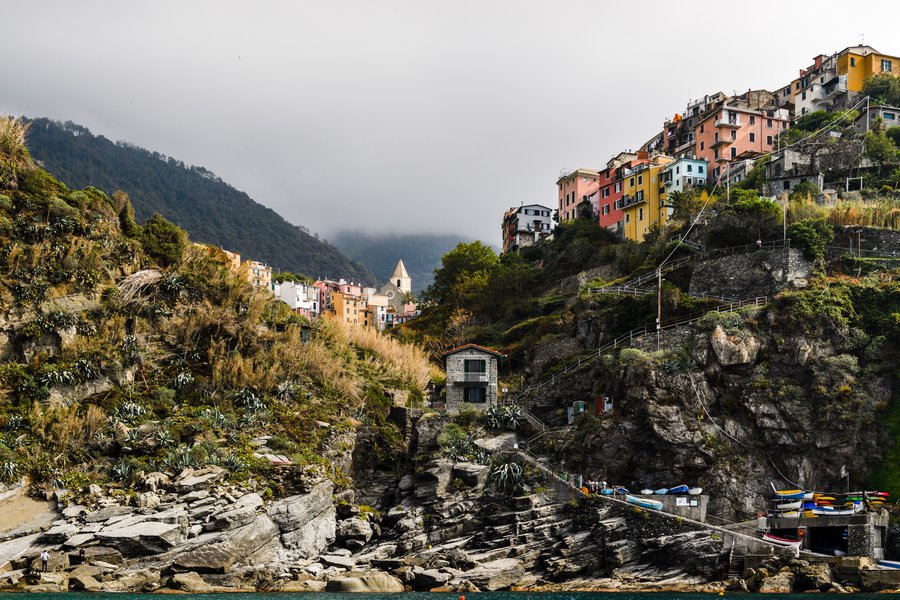 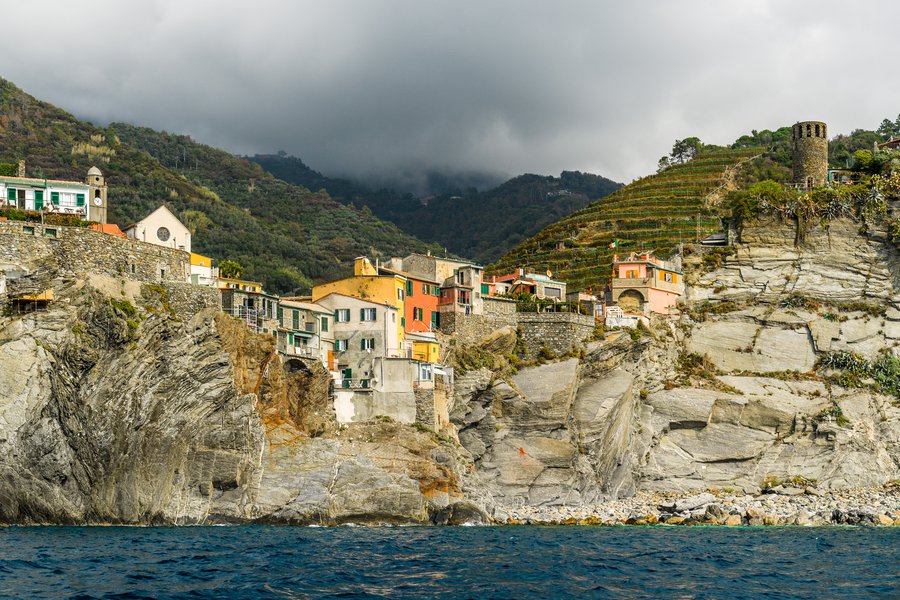 And then we cruised past the middle village, Vernazza, which we'd visited by train the day before. 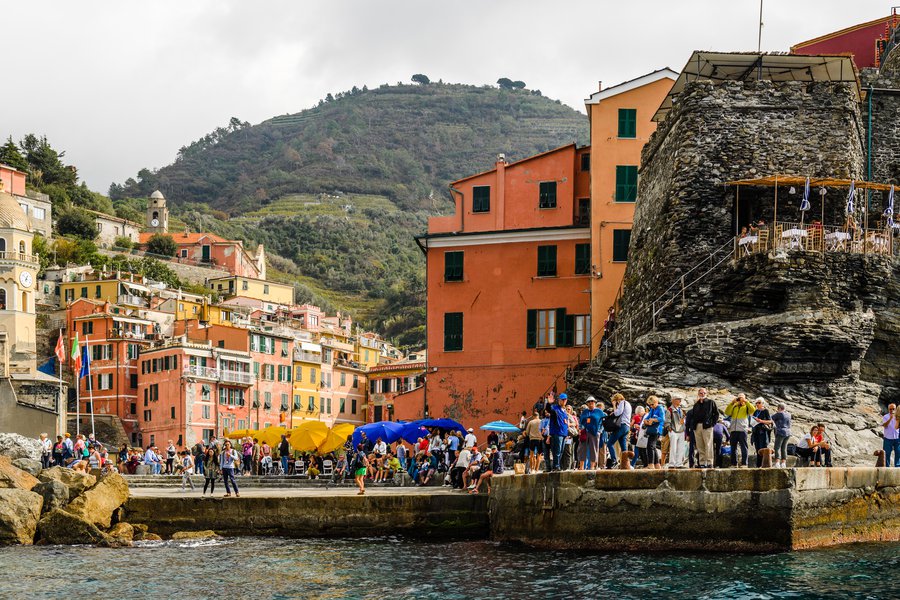 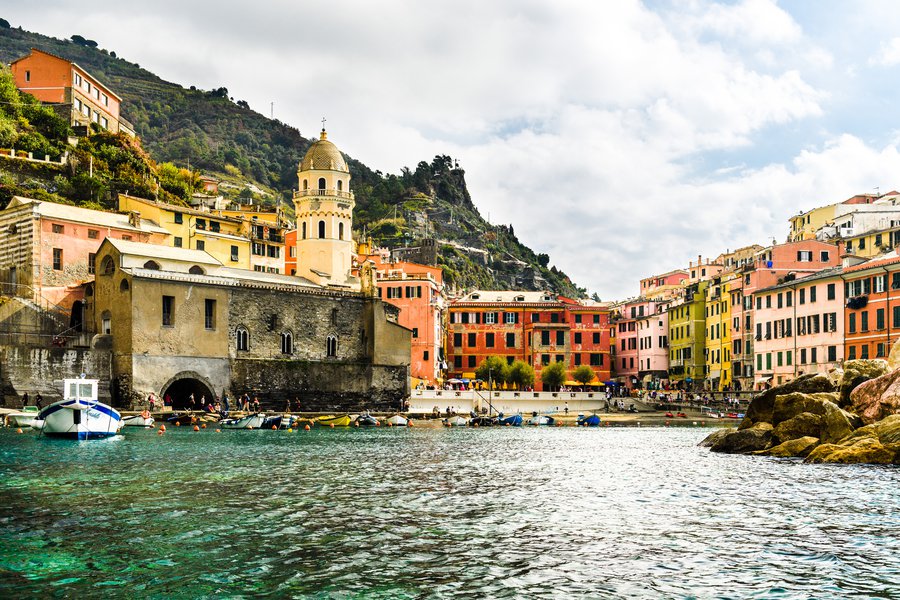 And then! Our captain got super close to the rock face and said, "Let me show you something." 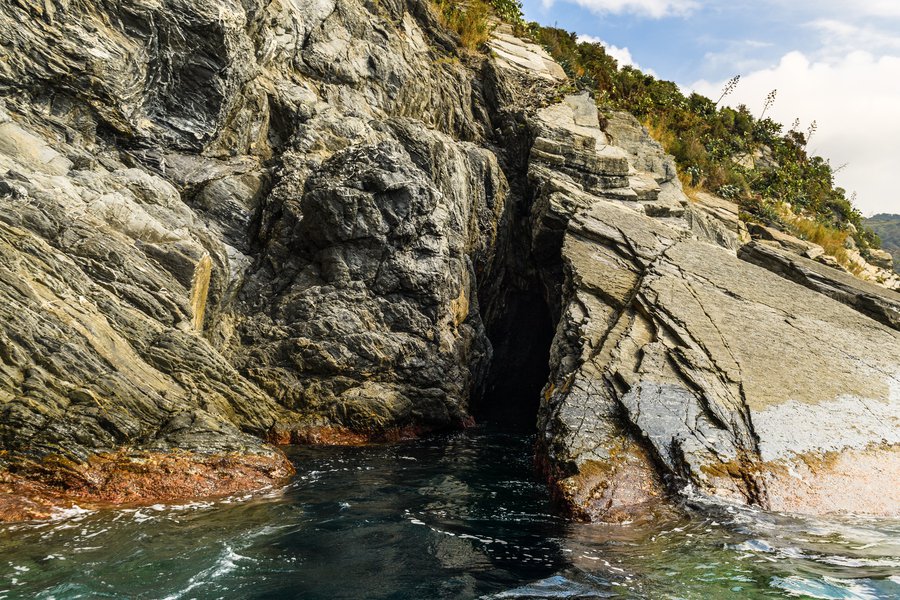 A cave, thin as a nail, hid behind the stone, and he guided the boat into the slot like a pro (inches on each side of the boat, and not a scrape!). He said he'd been on the sea since his grandfather started to teach him as a toddler.

Inside the cave, the waters glistened clear, and we could see straight down. 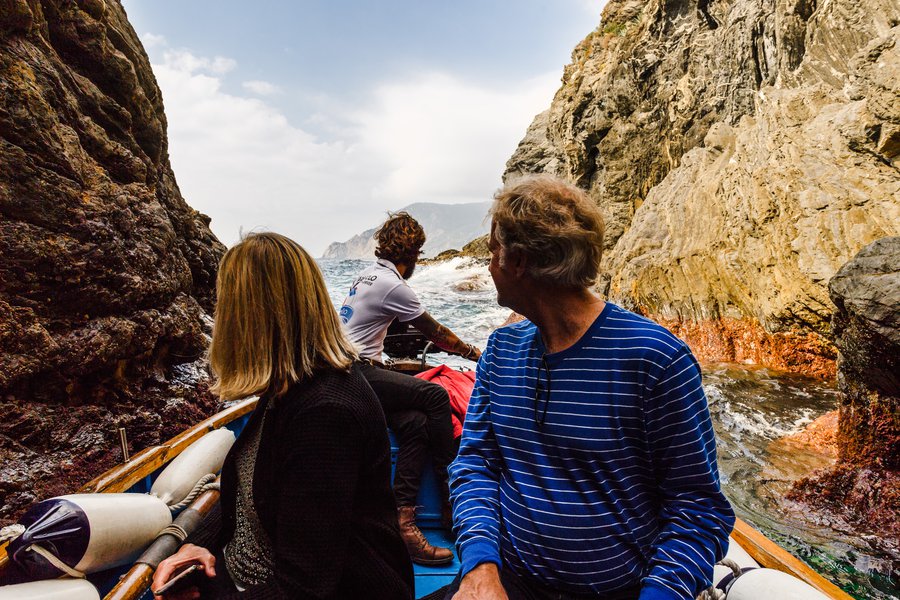 We were all mesmerized. 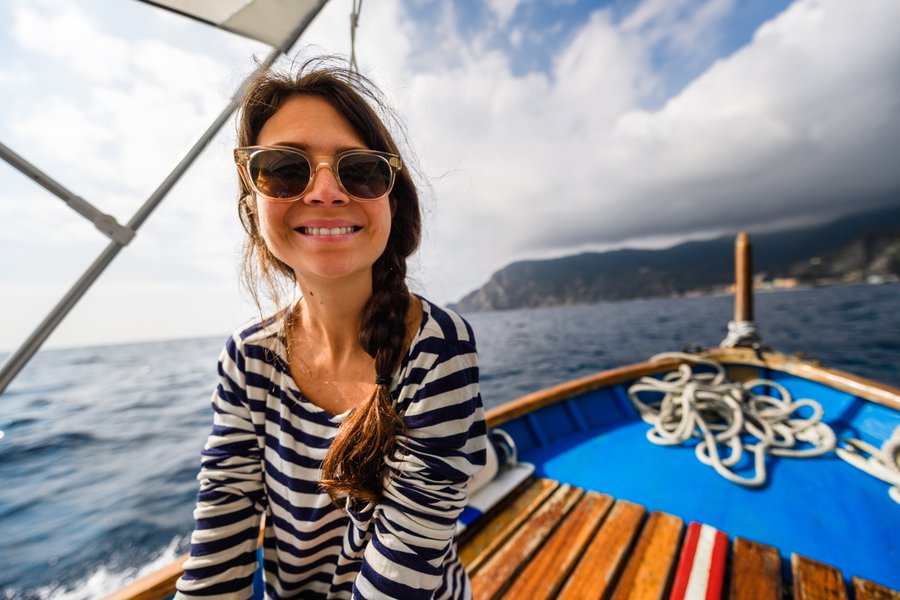 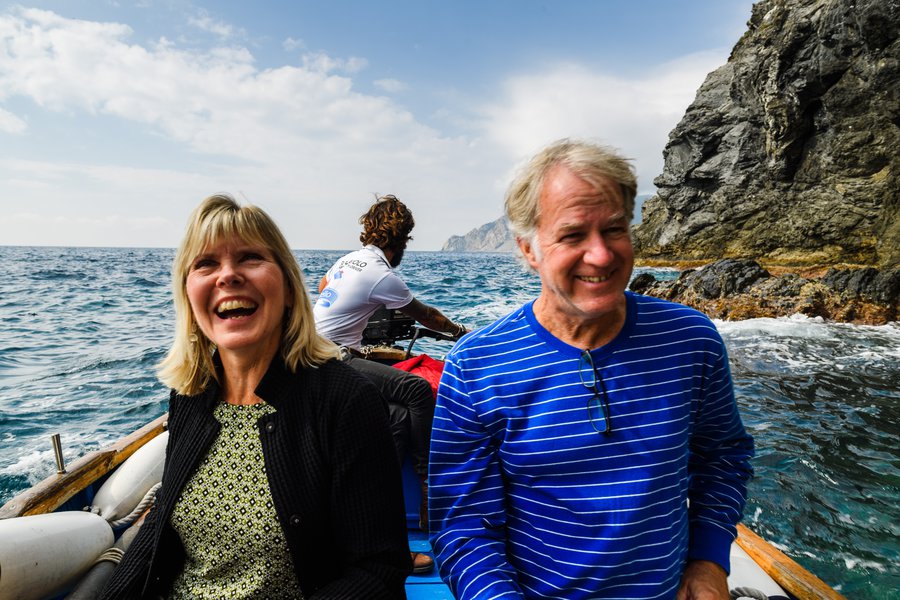 Last of the five villages brought us 'home' to Monterosso again. 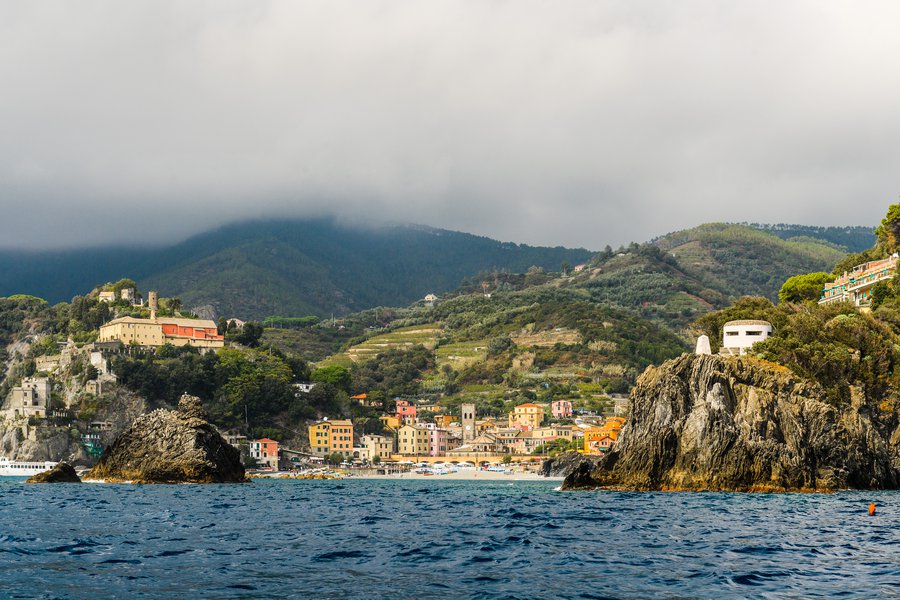 What a treat to see this jewel-dotted coast from these gem-sparkling waters. 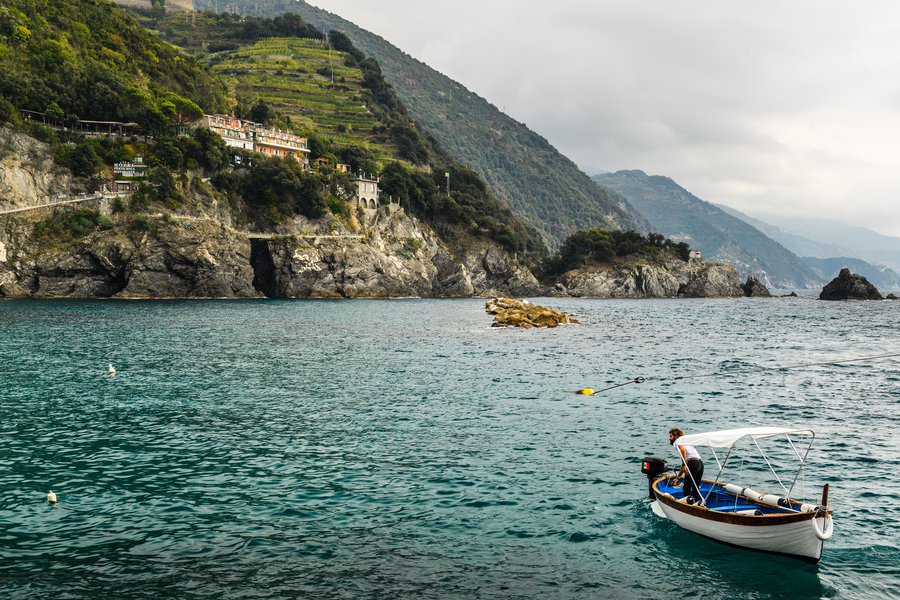