Everywhere we go near water, Walker wants to go watching for whales. The title of this activity should tell you how it always goes, but his search for the perfect pirouetting mammal continues. This time of year is lucky in Hawaii as the humpbacks are in town. Apparently they travel 3000 miles from Alaska each winter to breed and deliver in the balmy waters of Hawaii. The waters were actually warmer than the air sometimes and I rarely felt cold in the ocean. 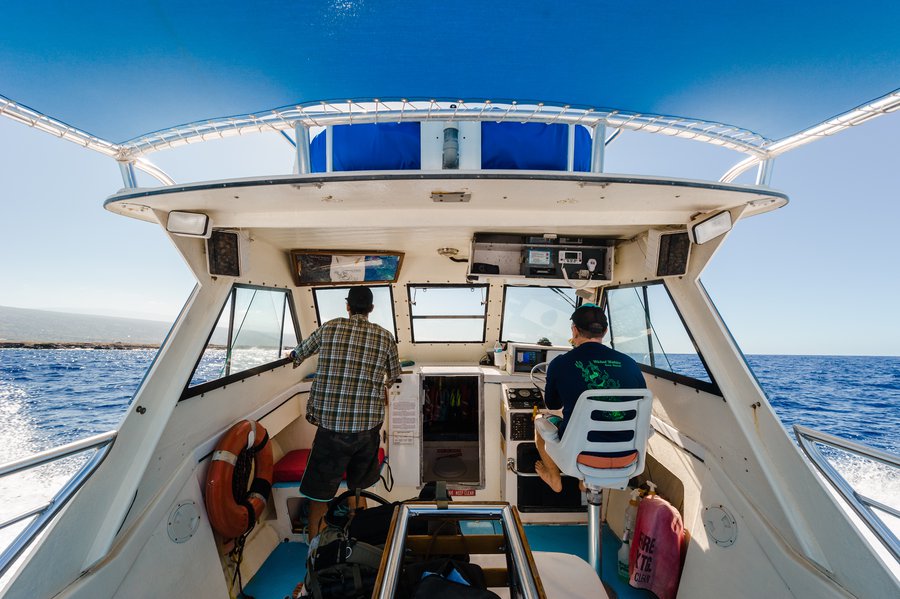 All that said, my in-laws chartered a boat with Wahine Charters, and we set out on the hunt. 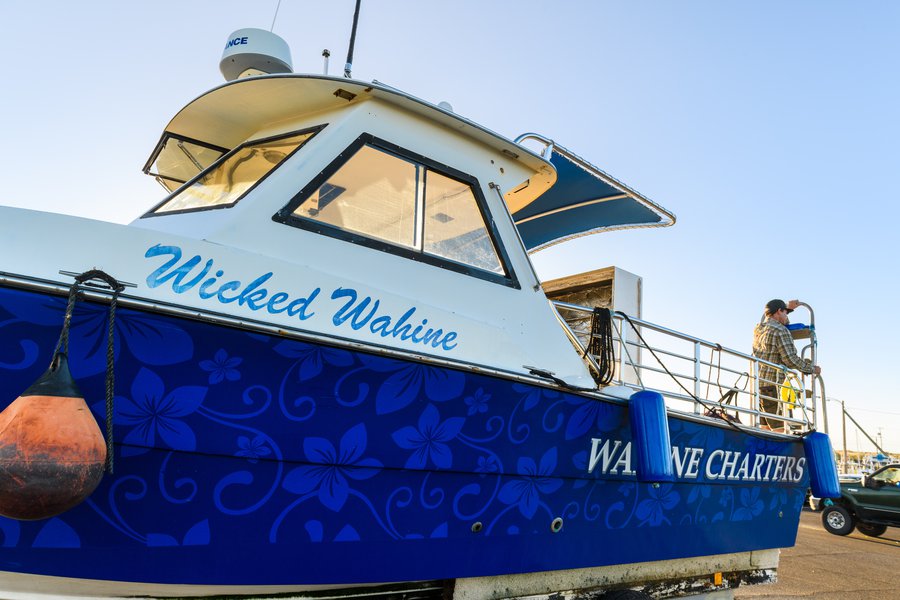 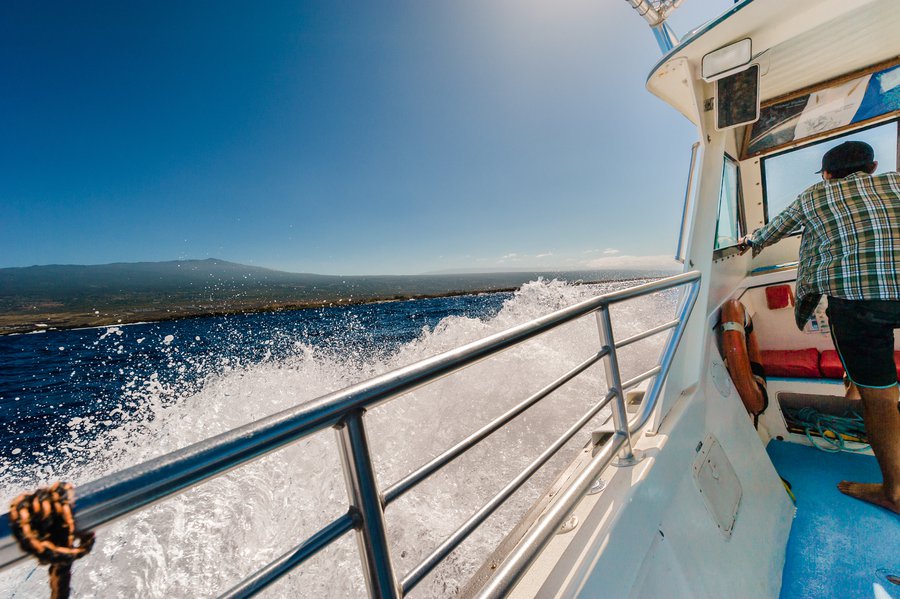 We left from the Honokohau Marina, about 45 minutes south of our resort on the north west coast of Kona with our captain Tim and mate Pano, headed north. 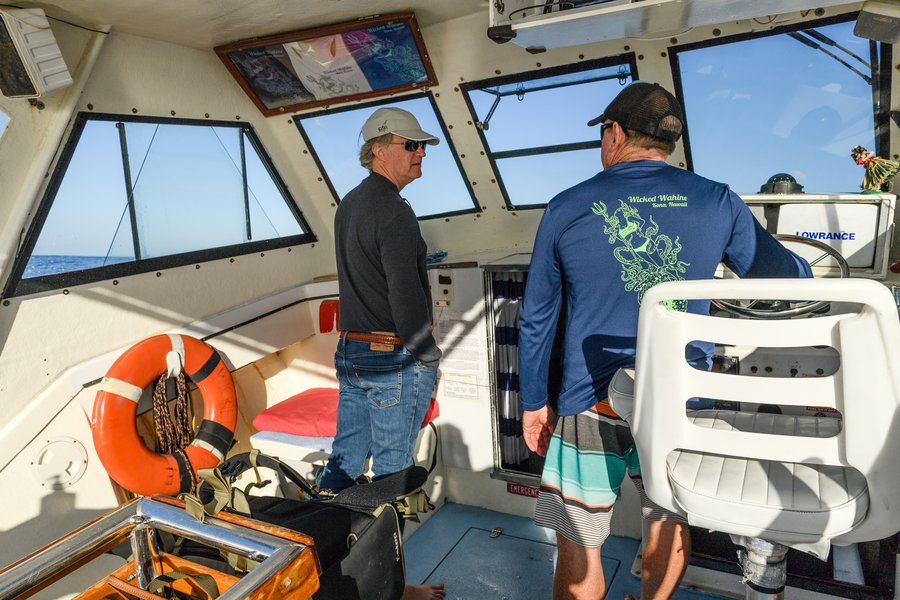 The waters were extraordinarily rough; the few days before they had to cancel trips due to storms and surges, so as we bounced over the waves, nearly as tall as the boat, it really felt like an amusement ride. I clenched my hand on the boat's rail and didn't let go for an hour. The air was clear and we could see far; Tim even pointed out how well the mountains were defined in the distance, usually cloud shrouded. 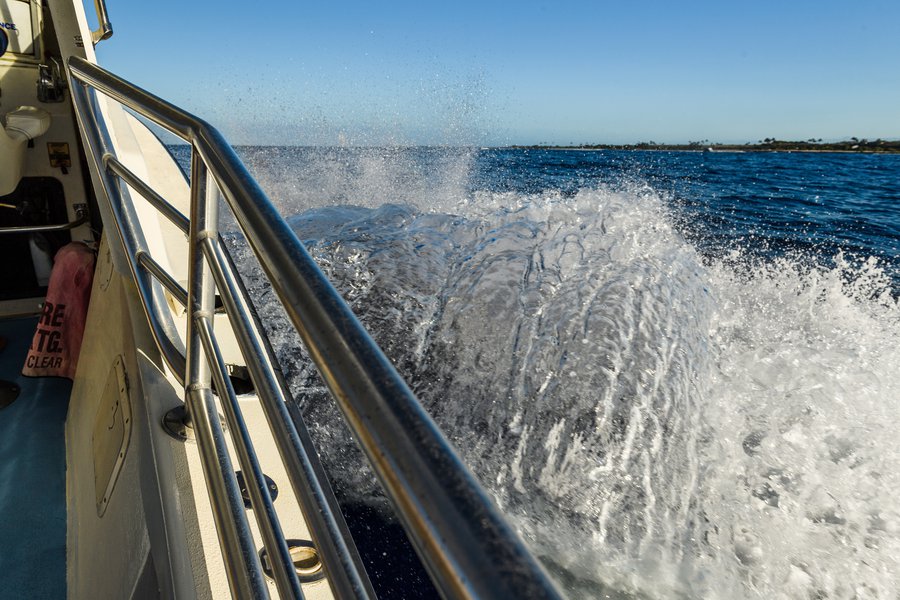 This is when the watching began. And let me squash the anticipation and tell you we did not ever see a whale breaching. 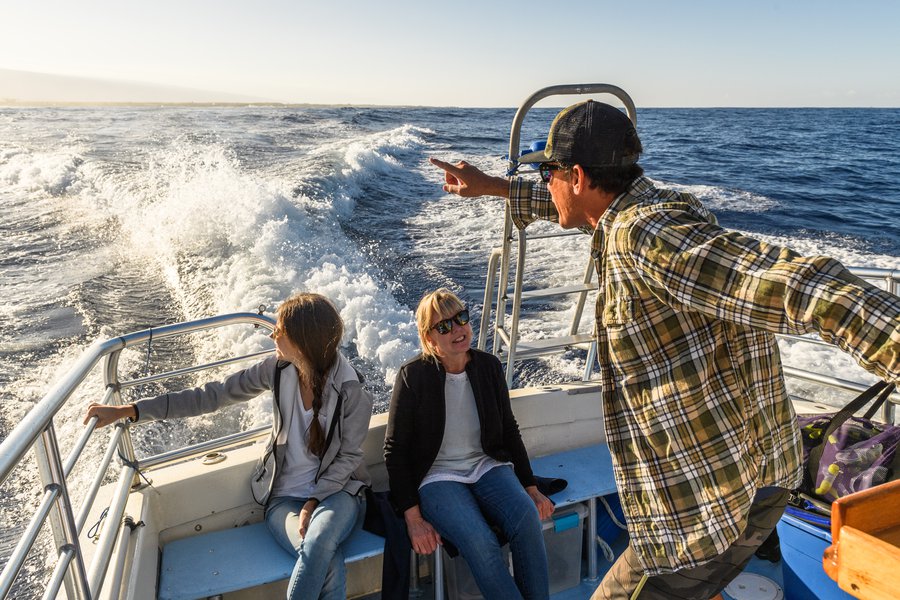 But, we watched hard. We watched lots of water spouts surrounding our boat, and learned that after a spout a whale often goes down for an hour, so chasing spouts is a bit futile. 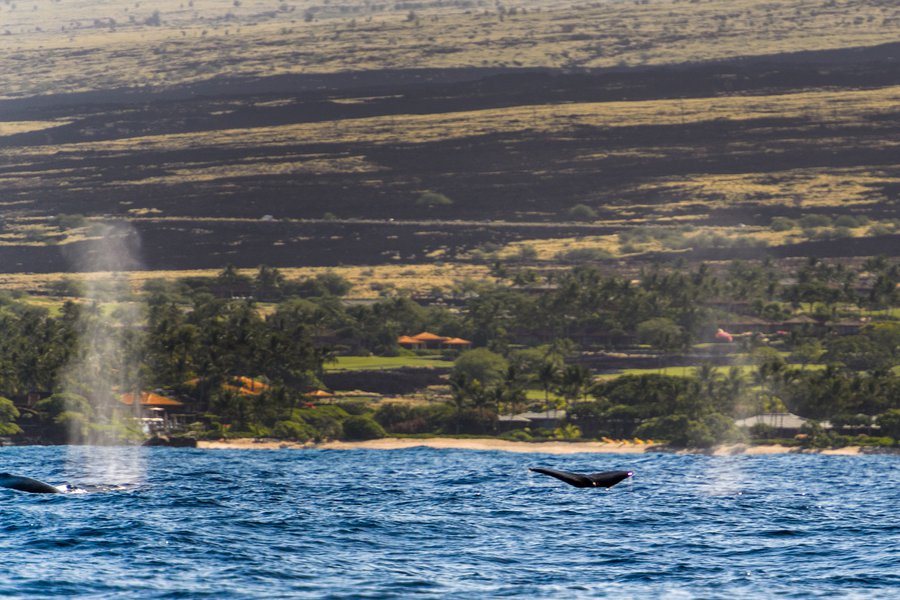 One of the coolest parts of the watch was when Captain Tim put a microphone into the water and we heard that low, long moaning. They told us it was the males, and they were talking like crazy. And the sounds can travel 30 miles underwater. It was incredible to hear a whole soundscape hiding under that Hawaiian deep blue. 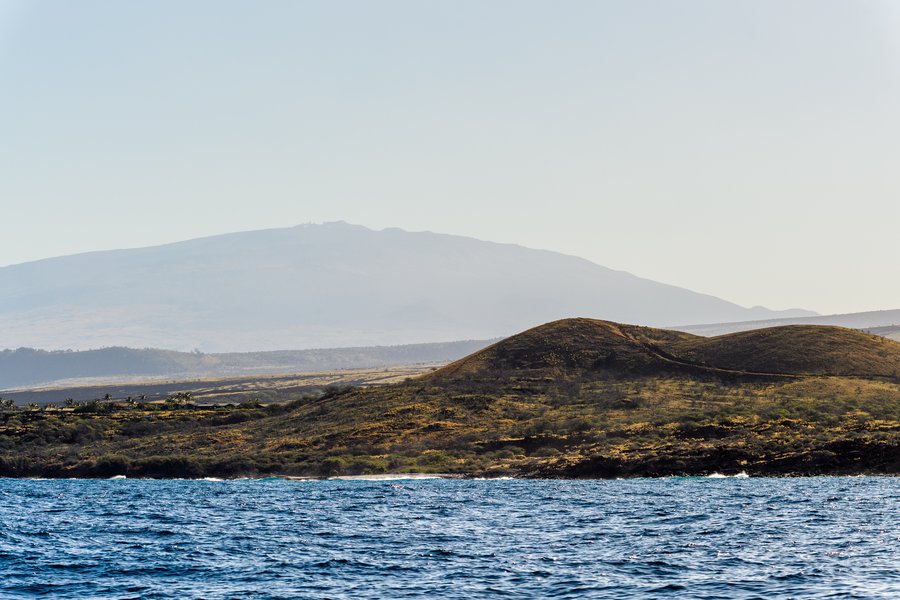 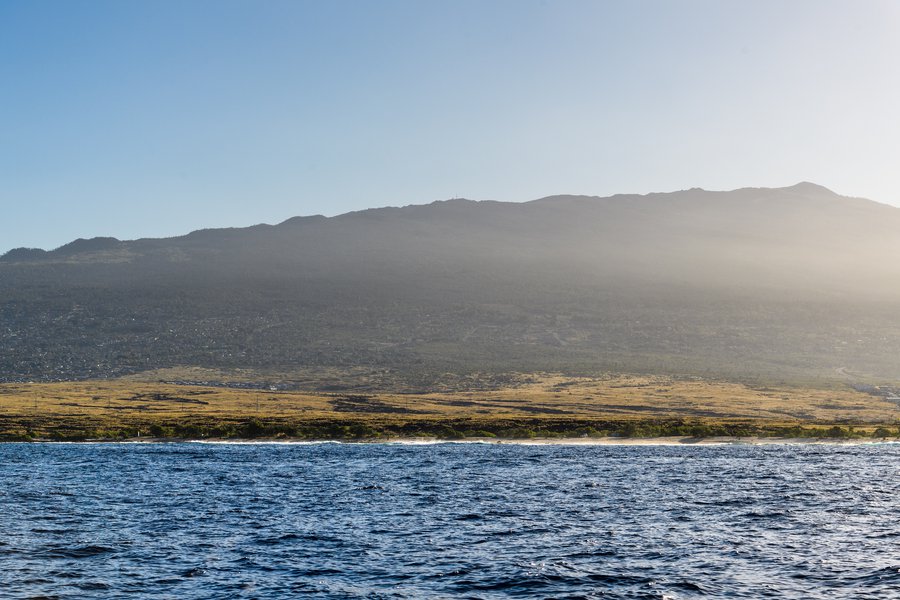 And then, like a deep, booming sneeze, we heard a whale right behind us. She didn't show us much, but the sound echoed in the air behind as she slipped back down. 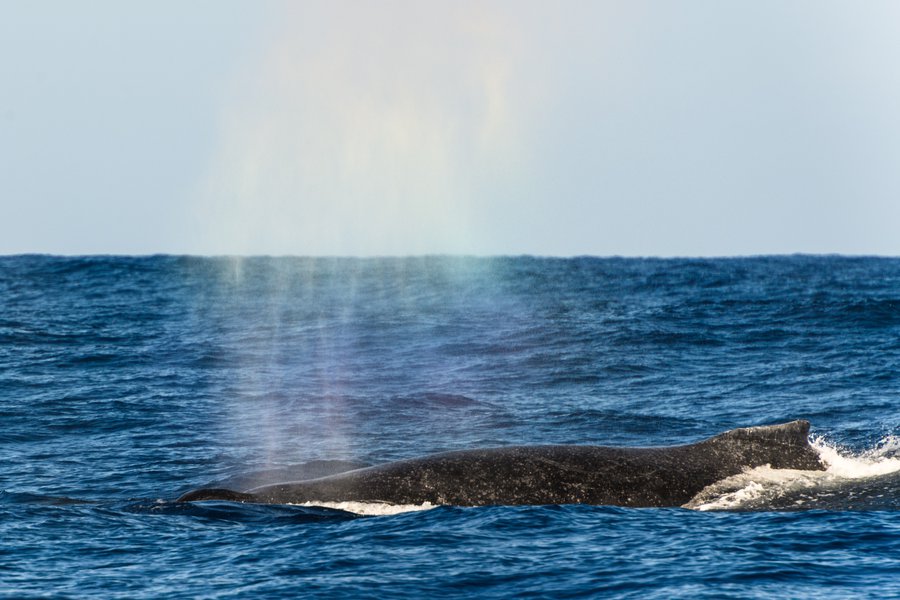 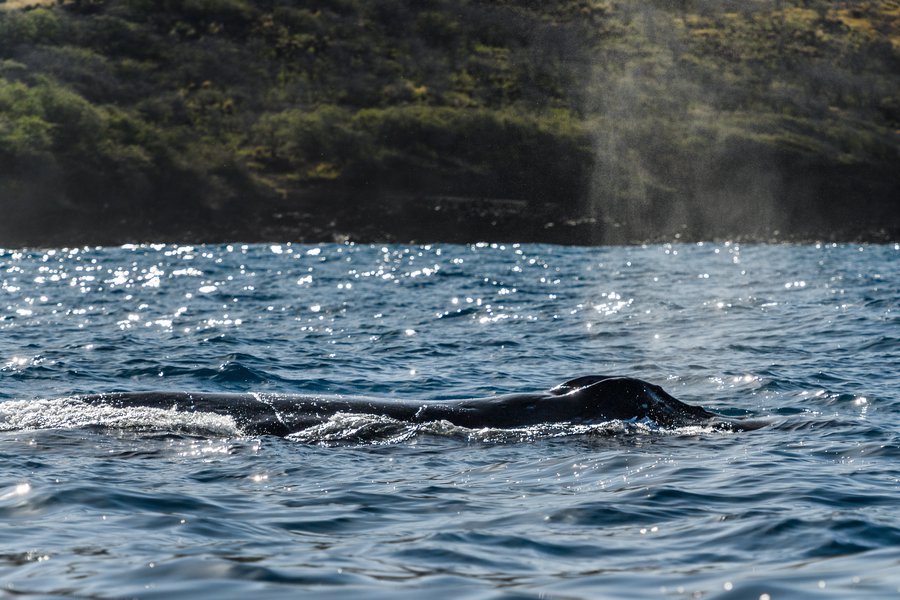 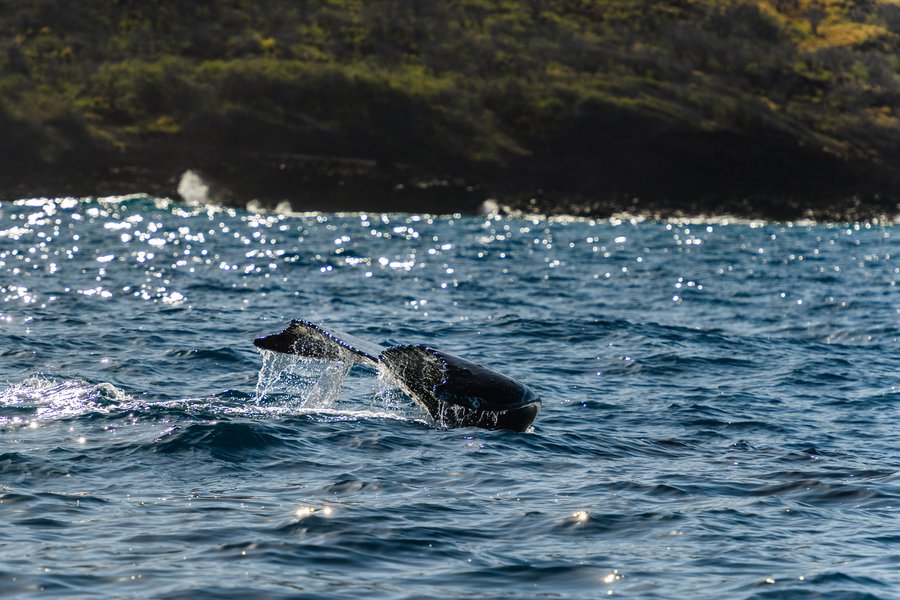 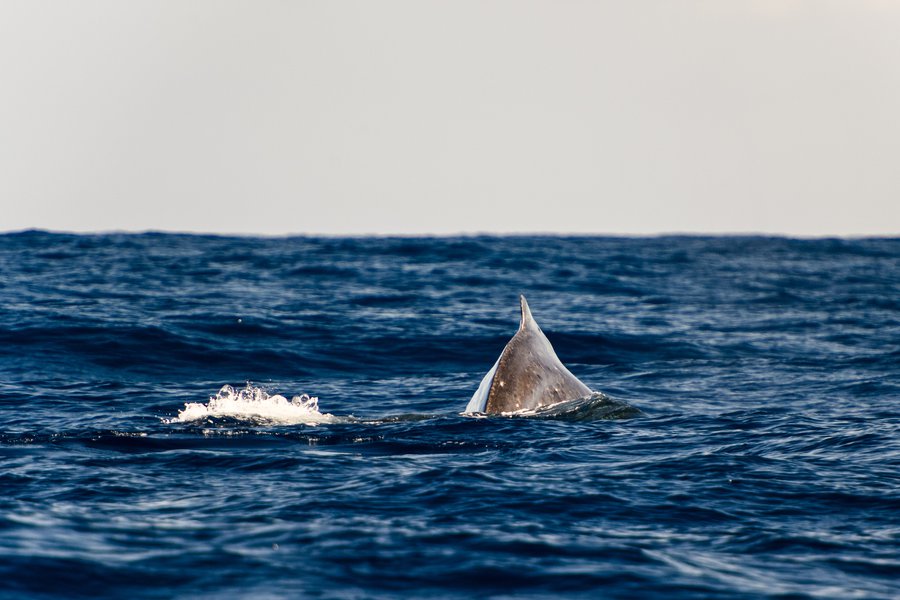 The thing about watching is no matter which way you watch, the whales pop up on the other side, and slide away before you even see their tales. So impressed Walk caught these at all! 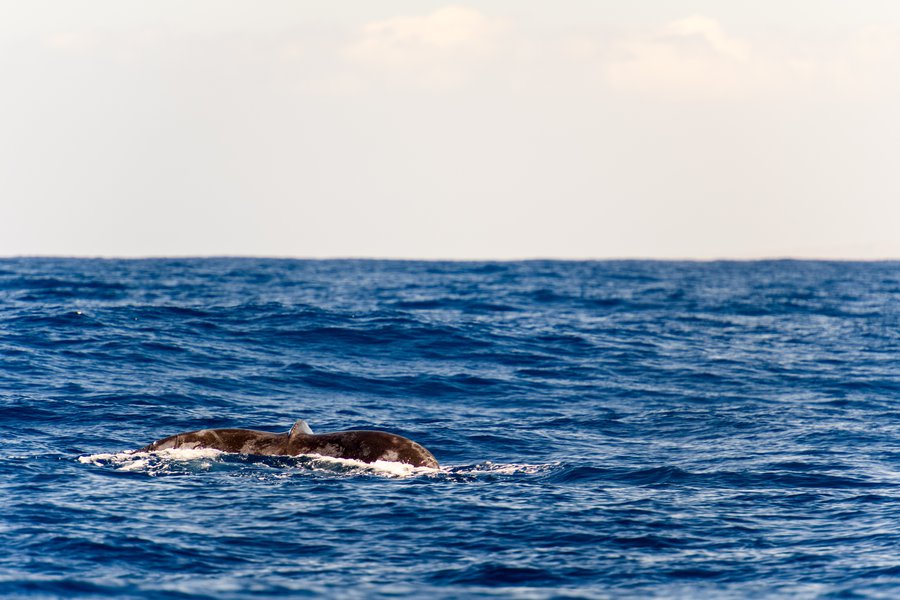 And even though the watching is largely unrewarded, the few moments of serendipity when they show is nearly addicting. 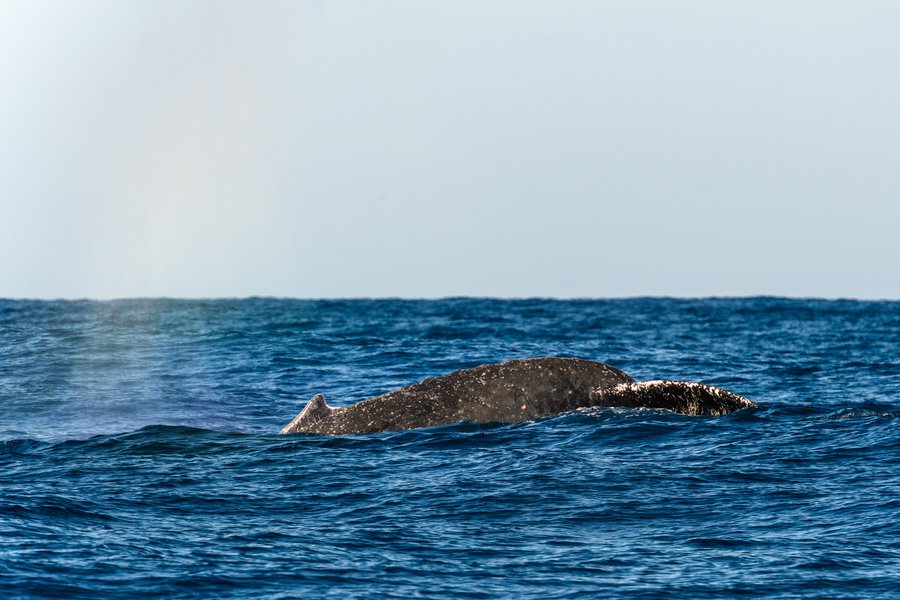 Coincidentally, since our hotel was fairly far north, we actually saw whales jumping in the distance from lunch several days, but they were too far for photos. 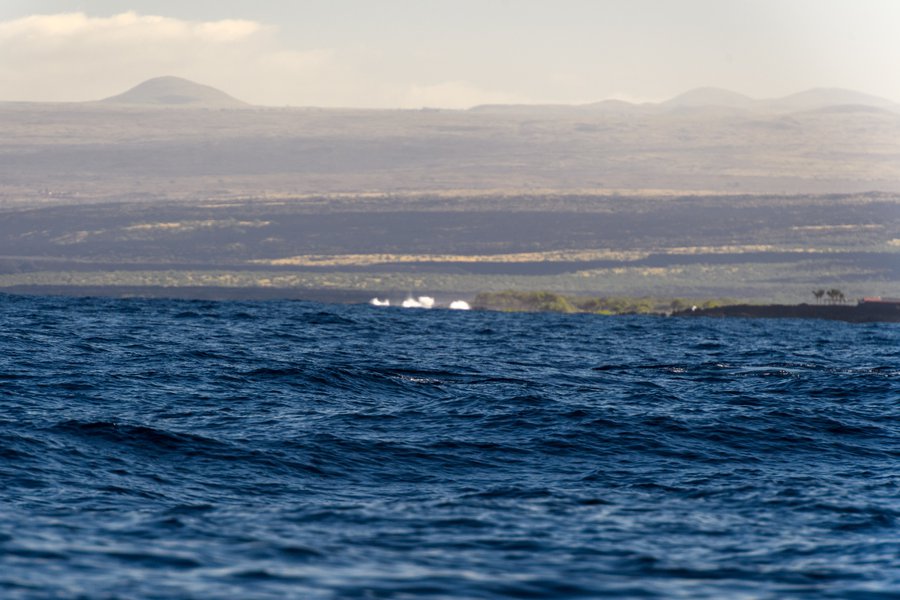 When the whales disappear, they leave behind a footprint, a disk of still, glassy water on the surface, something I'd never seen before. 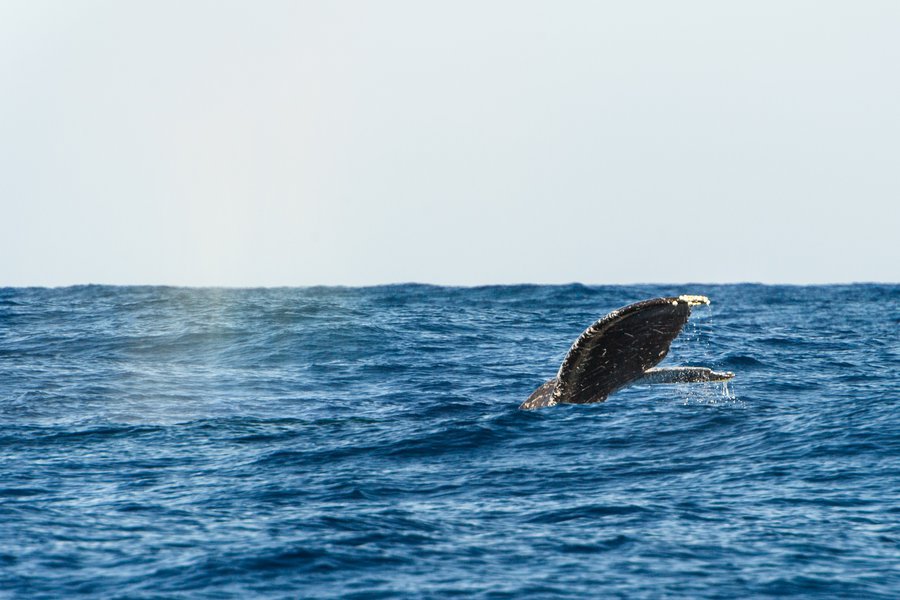 With half a day on the boat, and something else on our minds, we decided to head back south in hunt of some friendly and more playful mammals. 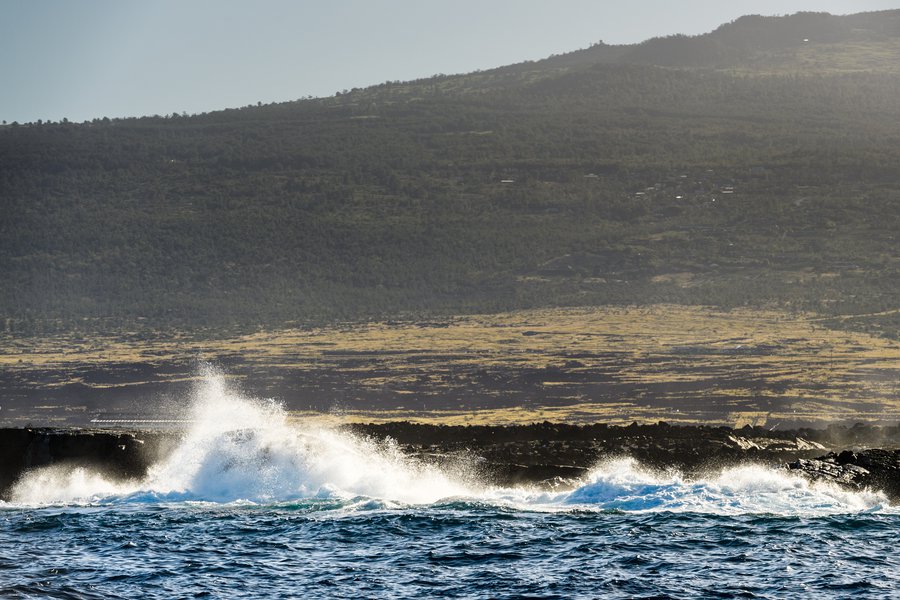 In the wake of the preceding days' storms, the water and air were cleaned and fresh,  and the blue splashed bright in the sun. 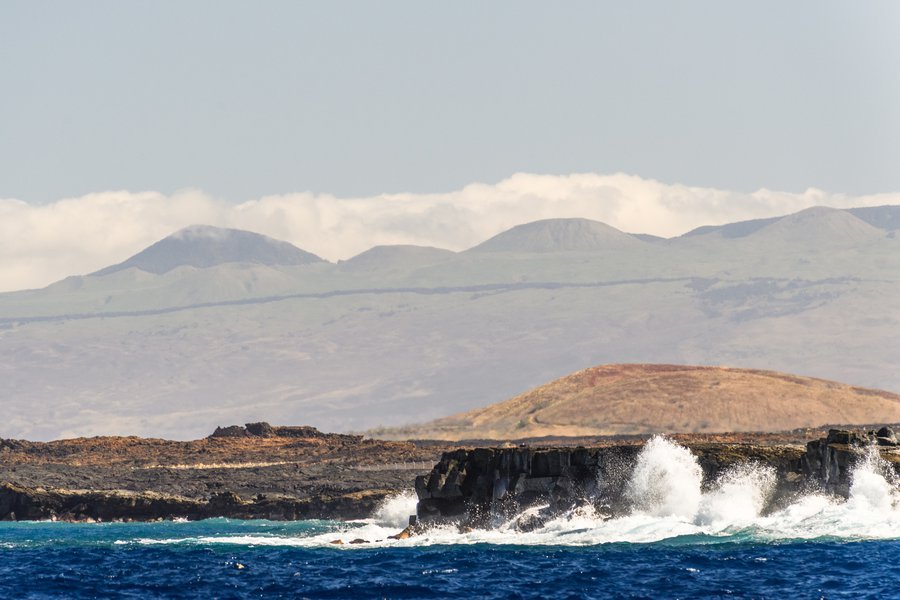 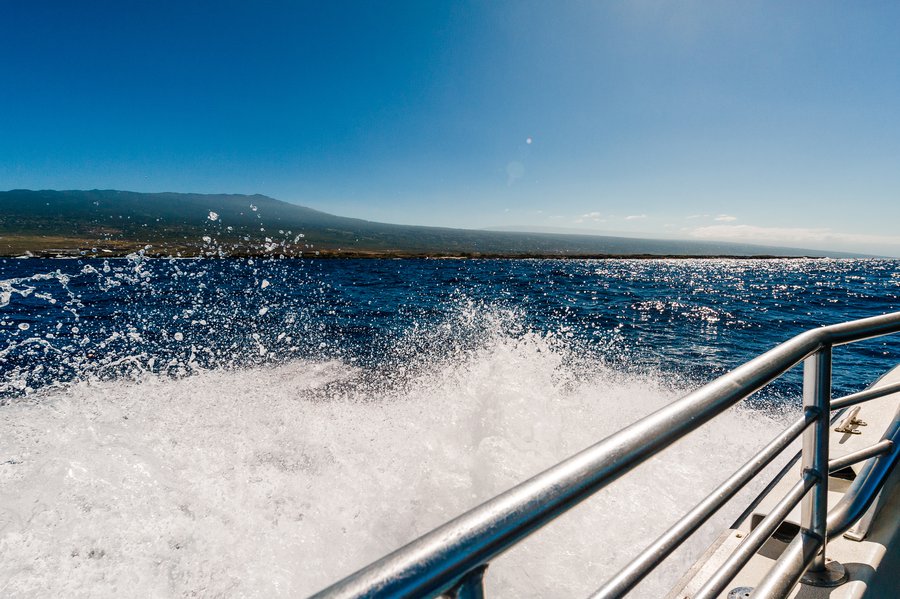 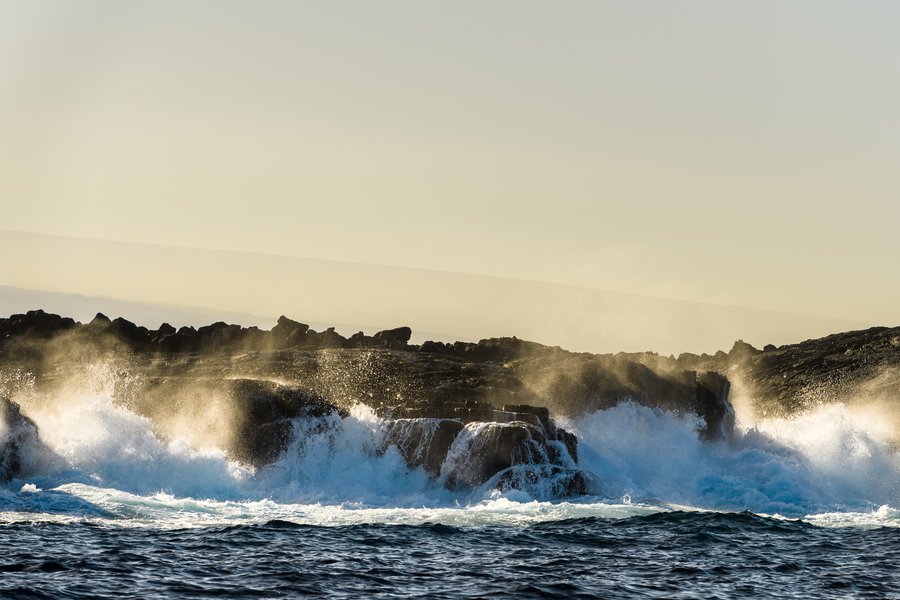 A bit of racing south along the coast and radioing, and we found them! I started to share in this post, but it was getting laborious to scroll so much--so look out for our first ever underwater photos in the next post. 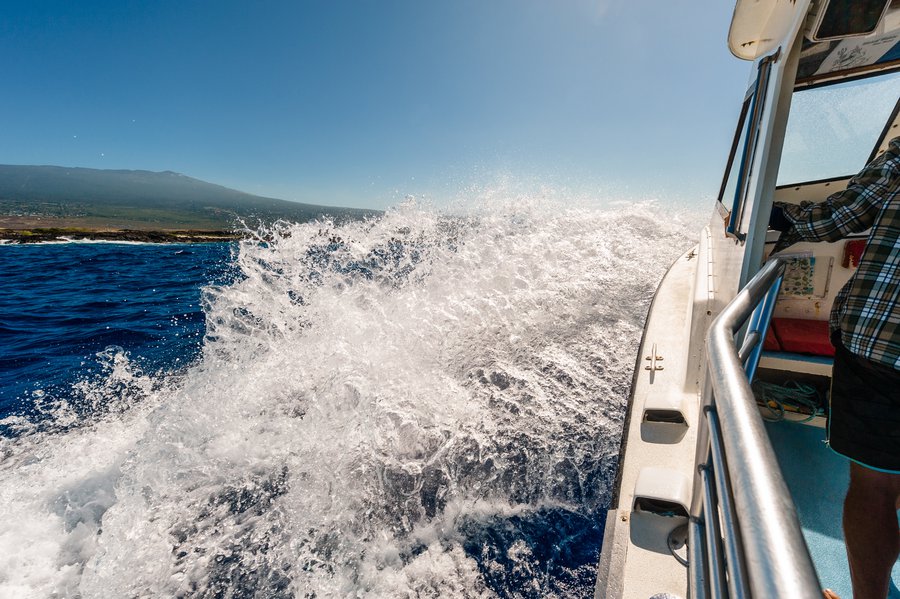