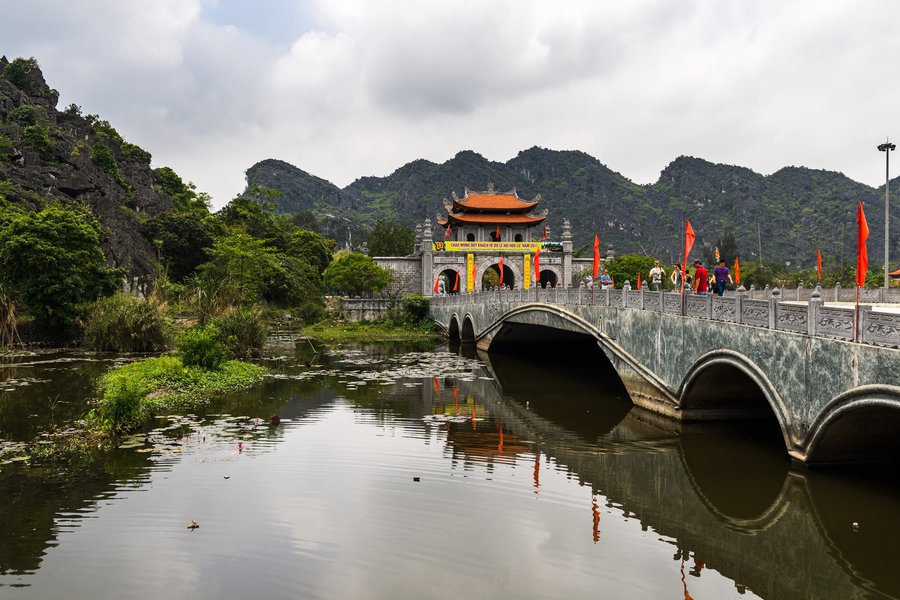 After our zenity serenity float through Ninh Binh's grottoes we asked our guide to take us to the long-hunted spot that I had seen photos  of months before. He added a bonus stop first, at the Hoa Lư temples. We learned from him a lot about these ancient spots, now just few ruins in a large cement park, but only a few tidbits of knowledge remain with me here, 3 months later. 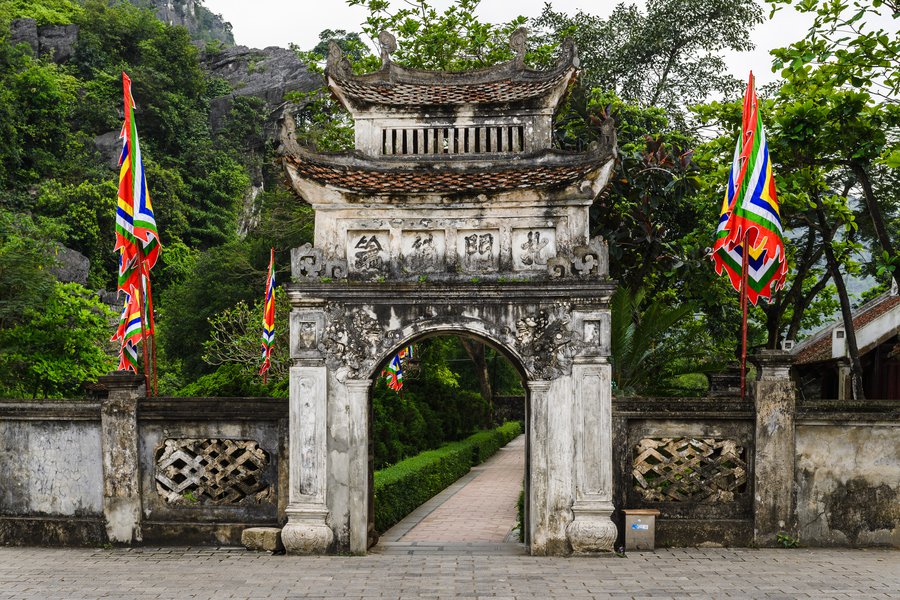 One was that one of the temples had shorter doors to signify that the army general who became emperor was not as high-ranking as the one who had died. 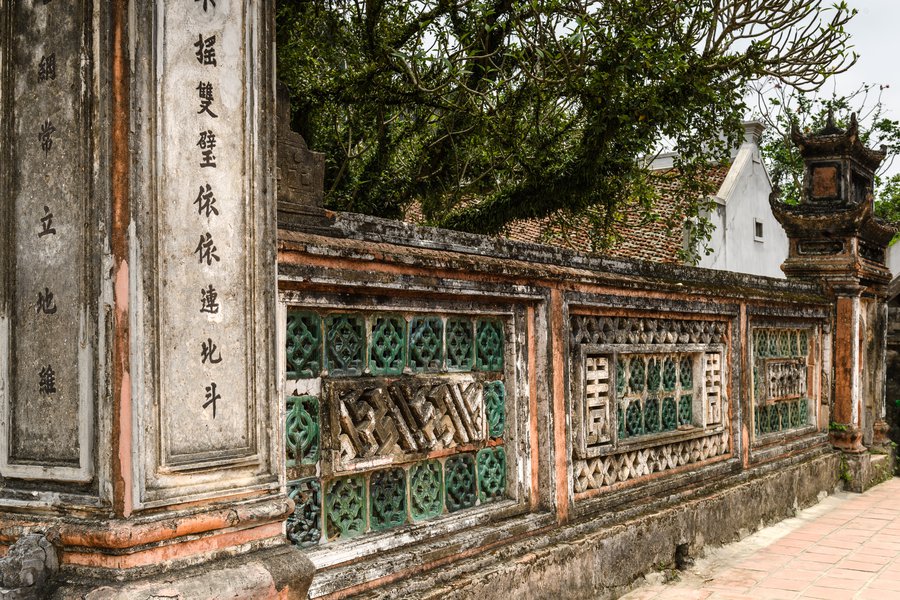 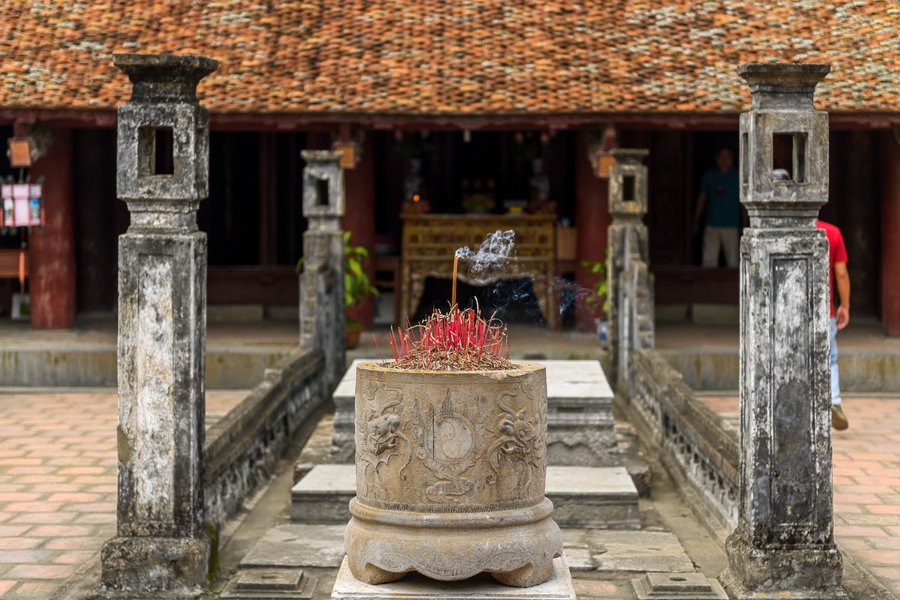 Without making this the theme of the post, it was brutally hot and humid; walking among the temples with the incense rising felt even warmer that the temperature probably was. I stepped inside for the shade and loved walking by all the water features that have been maintained for thousands of years. 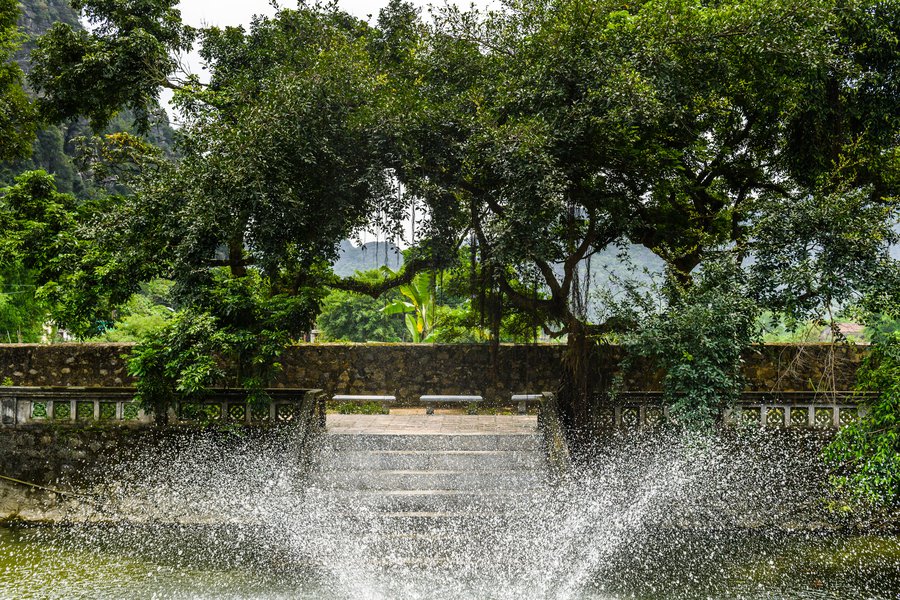 Another tidbit was that the unicorn is one of the 4 sacred spirit animals in Vietnam, but it is very different from the solo-horned imaginary creature of Western civilization. It supposedly combines features from horses, dragons and buffalo. Here he is!

The site of these ancient capitals was chosen because of the location surrounded by karsts. See what an ominous setting to invade it would be? 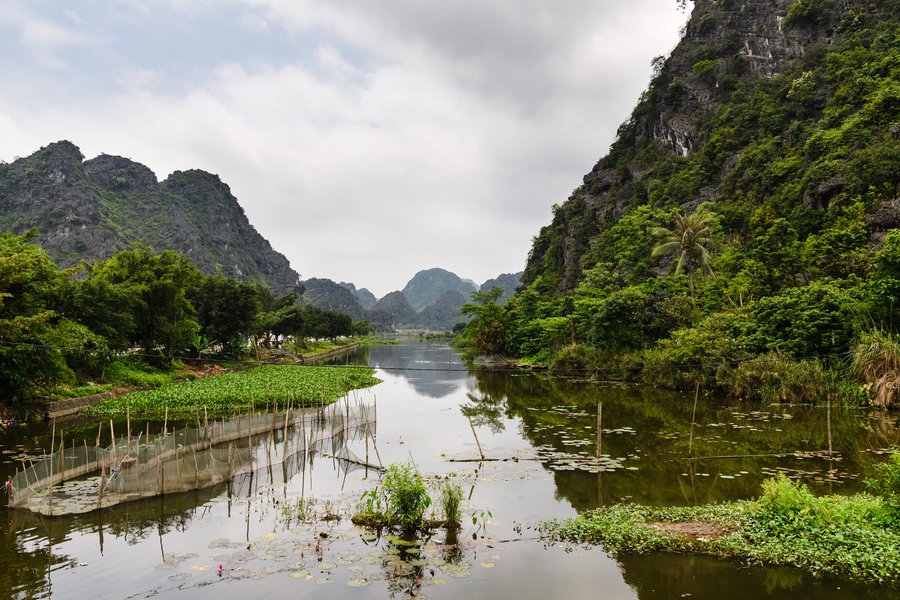 A few-minute drive away was the climb of the trip up the Hang Múa peak, where I was hoping for a clear view over the Red River delta and surrounding stone mountains. The day had been clear and slightly cooler, but by 1pm when we started the climb, the air itself was drenched. 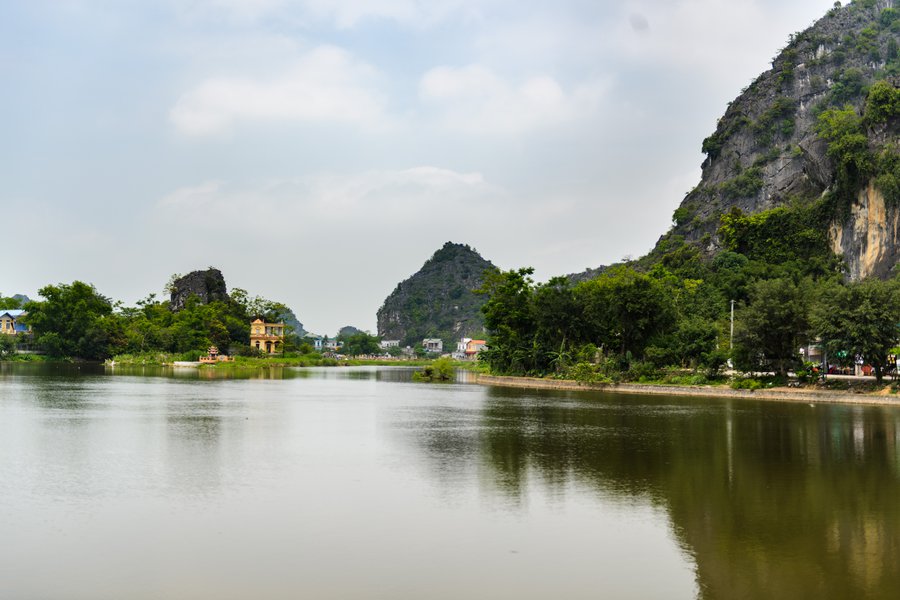 It doesn't look high at all, and I suppose it really wasn't, but the 600ish steps I counted to the top were each steep and tall, and it took 30-40 minutes to ascend. You can see the basic route lined with white railing here 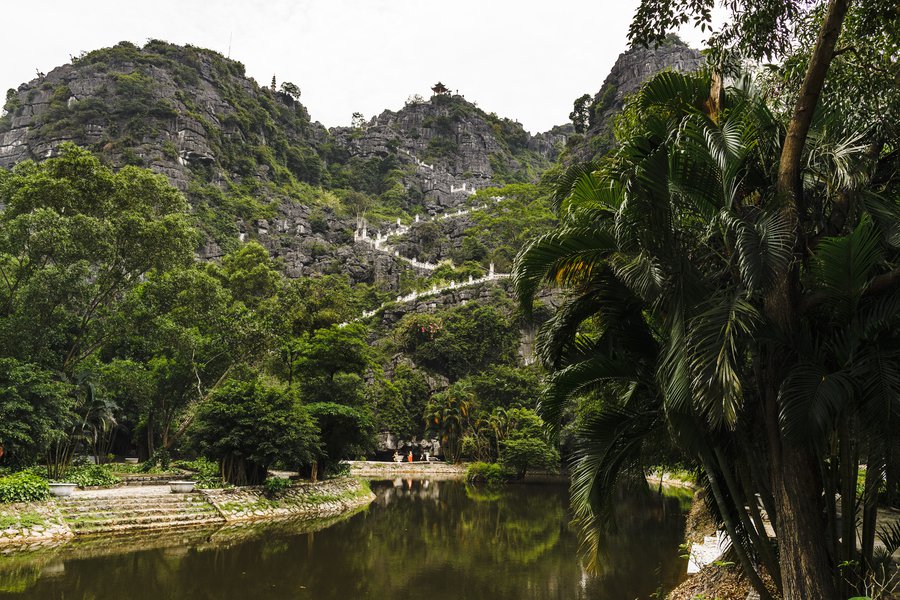 and look at these steps! 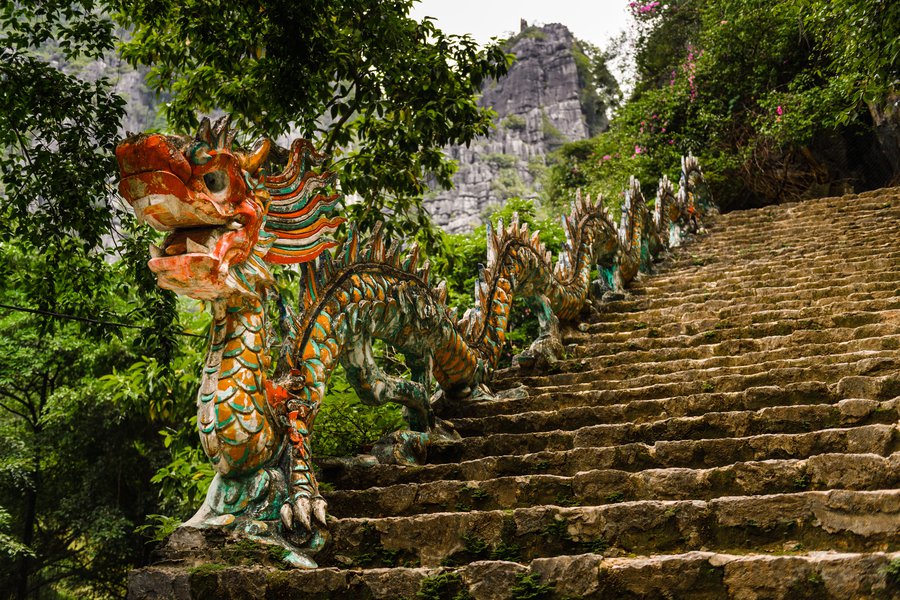 Just like the Marble Mountains, the cool limestone of the mountain was a bit damp and so each step needed to be cautious not to slip. And let me tell you, our hearts were a-thump-thumping (mine was, anyway). 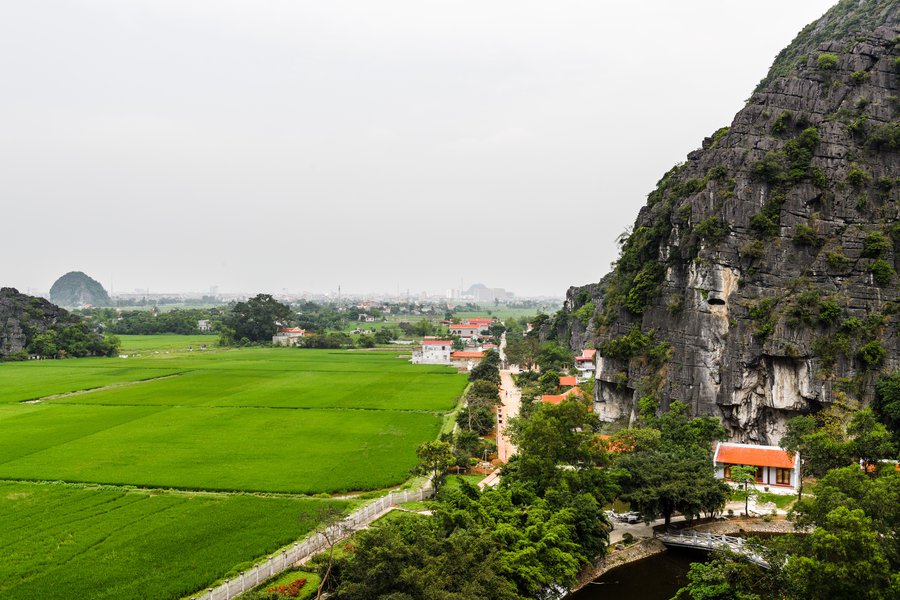 The view all the way up was stunning with the brilliant green rice fields below and the towering sharp mountains ahead. 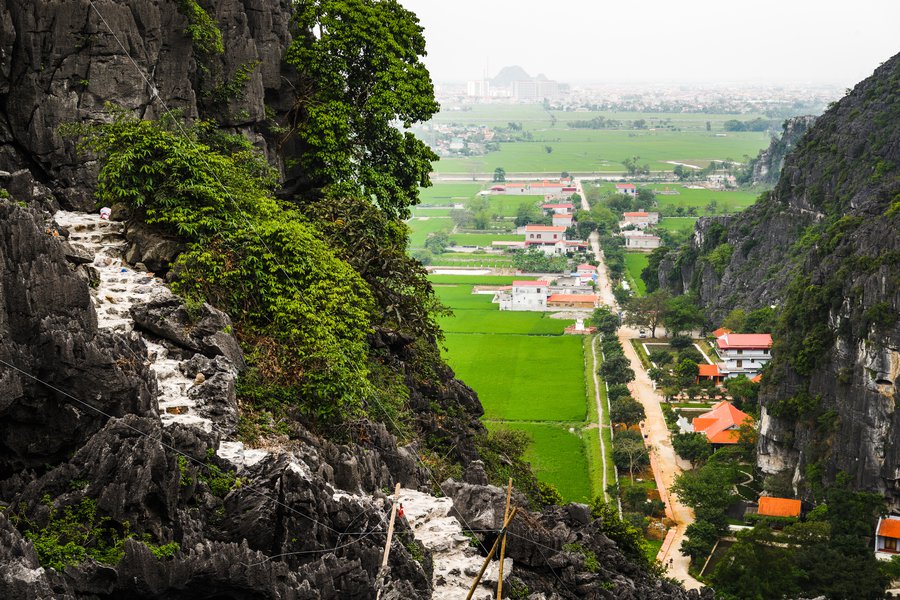 And I took plenty of breaks to take it in/calm my heart down. We didn't hike to this other peak because it was still under construction and closed.

But it felt very Tolkien. 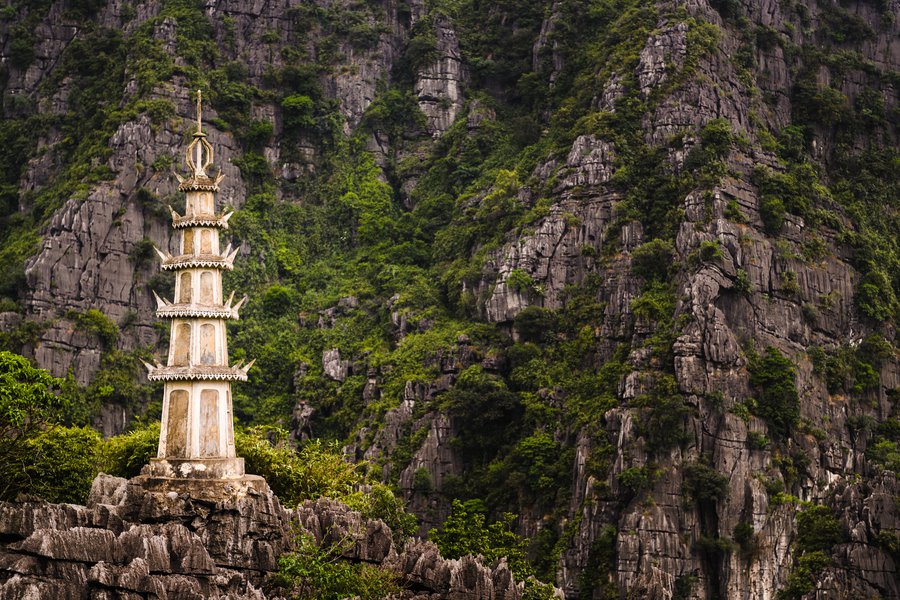 The sun came and went but just as we made it to the peak, 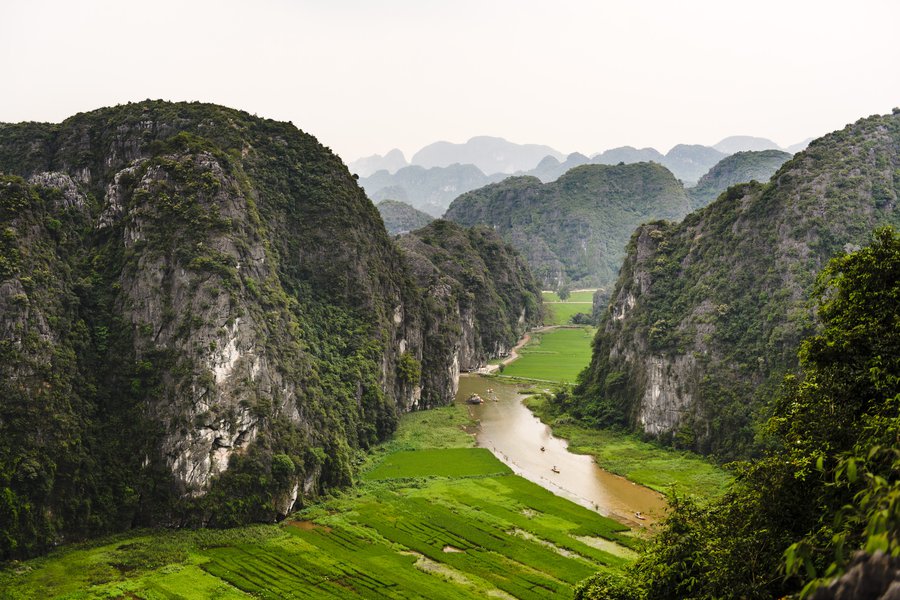 it decided to blast us. Unlike all hills I've ever ascended, there was no breeze at the top and the stagnant air was just so incredibly different from anything I've felt. 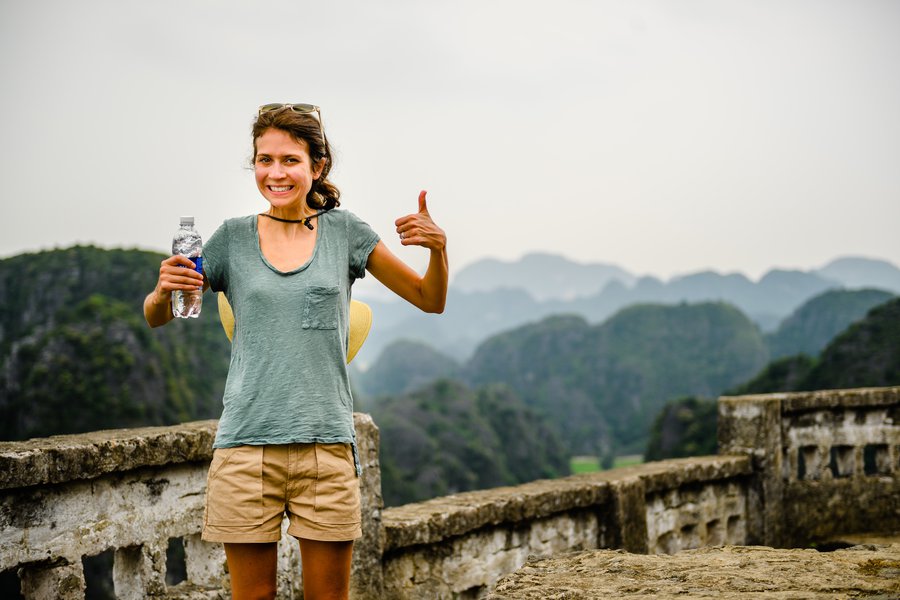 If you look at the river far below, you'll see small dots of boats. These are the same boats we took when we visited Trang An! 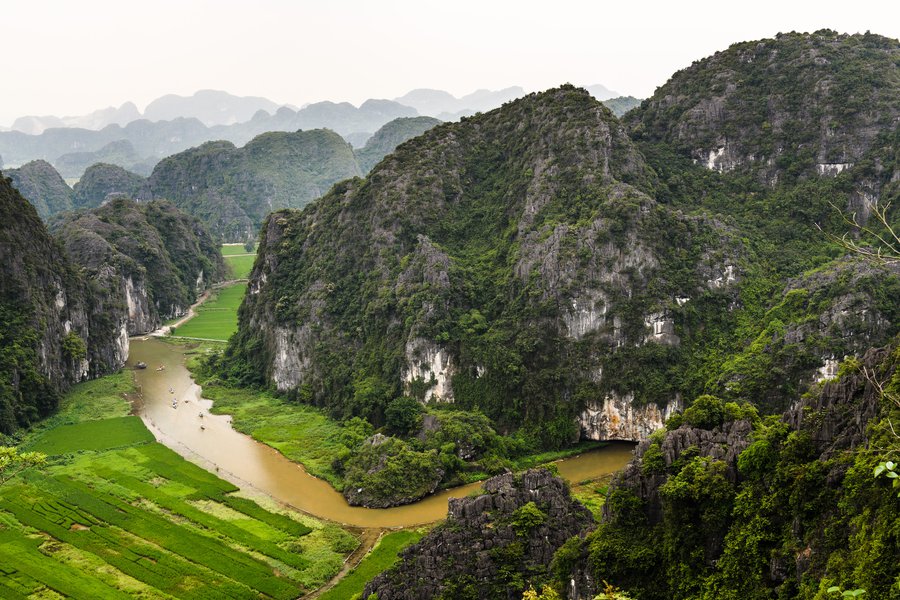 This is the view I had hunted from my MacBook Air in Brooklyn and here it was; it felt like such a triumph, especially as we basically had the trail to ourselves. 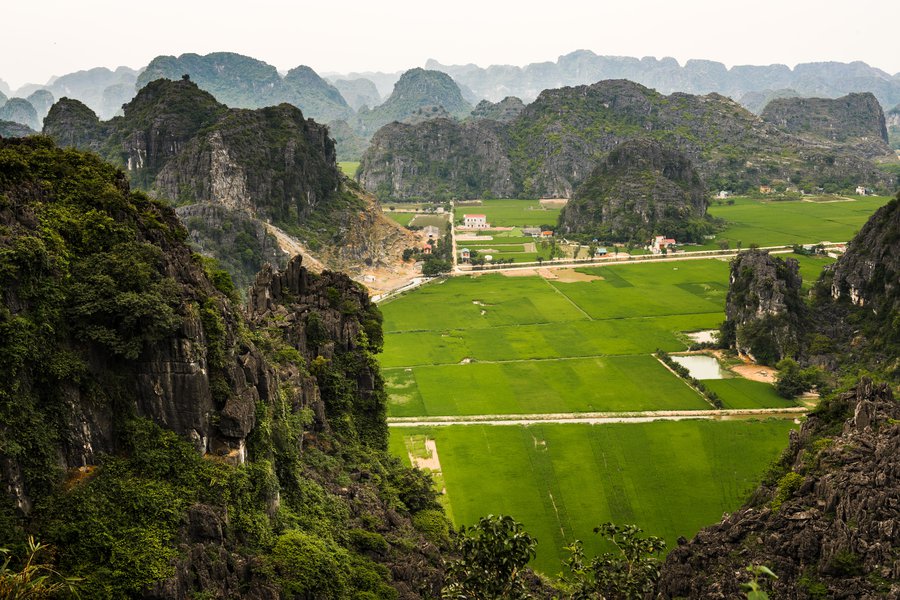 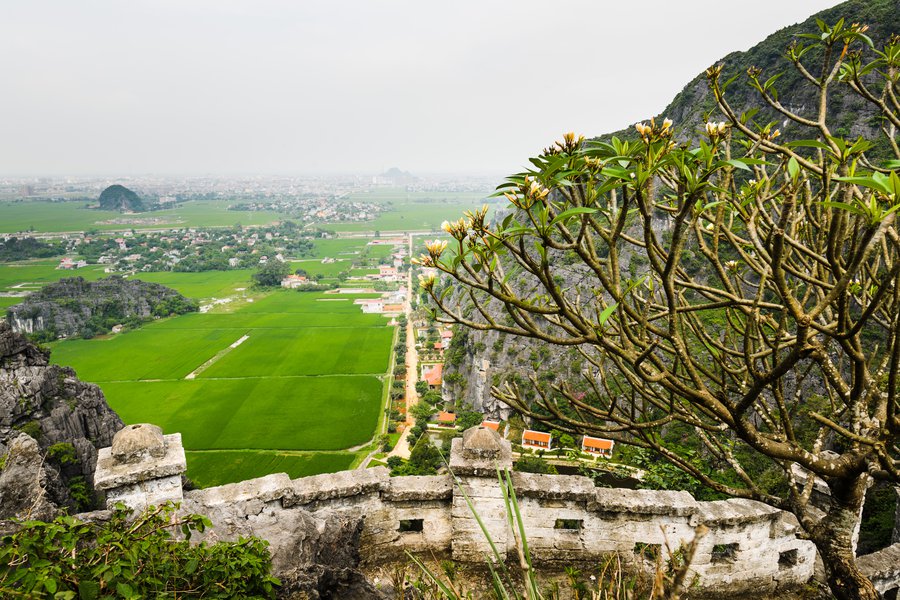 This lady stood at the top, providing shade but not really any cool. Without fail, the 10-15 other pilgrims we saw on the hike seemed surprised when they reached the top to find it hotter than below. 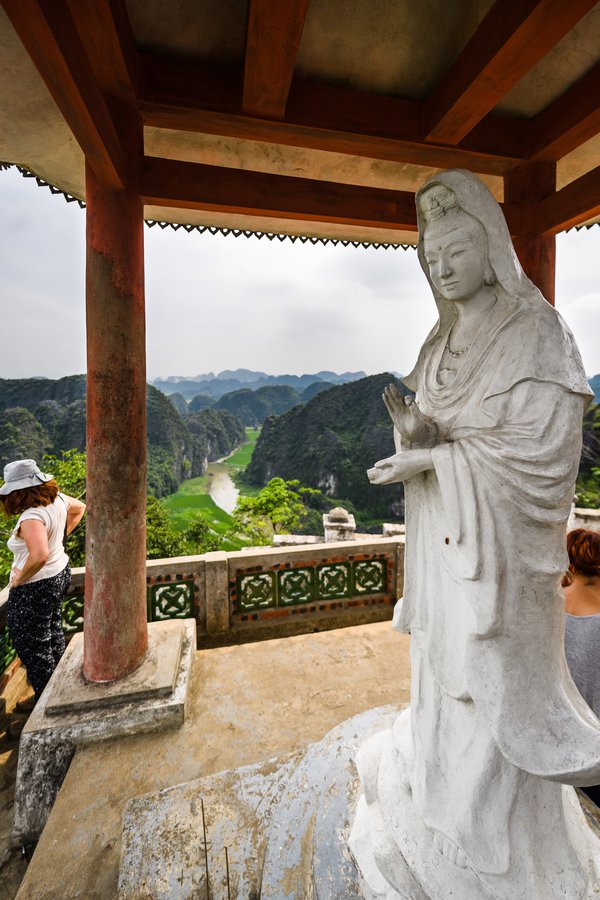 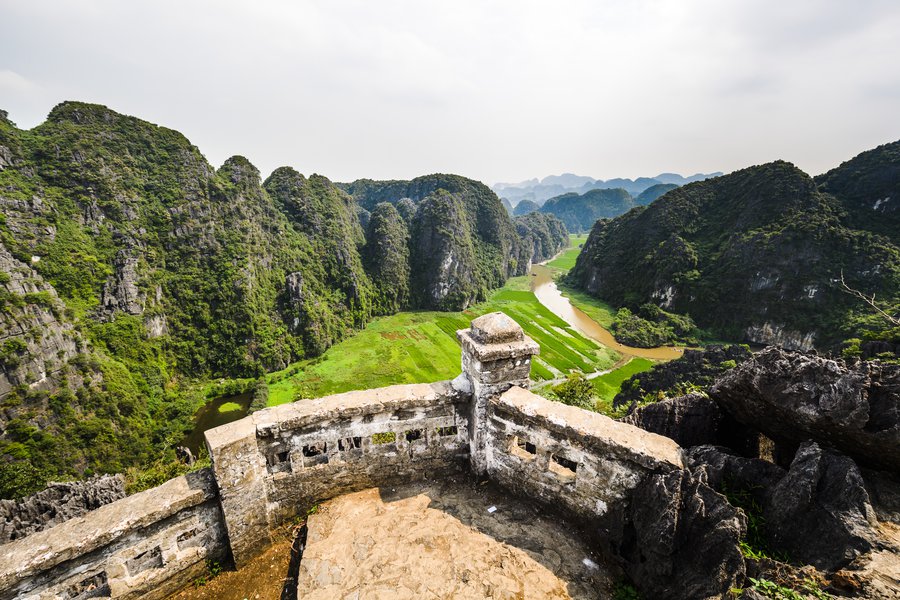 After about 30 minutes at the top looking over the rows upon rows of mountains, I felt a bit faint and headed down, slowly, 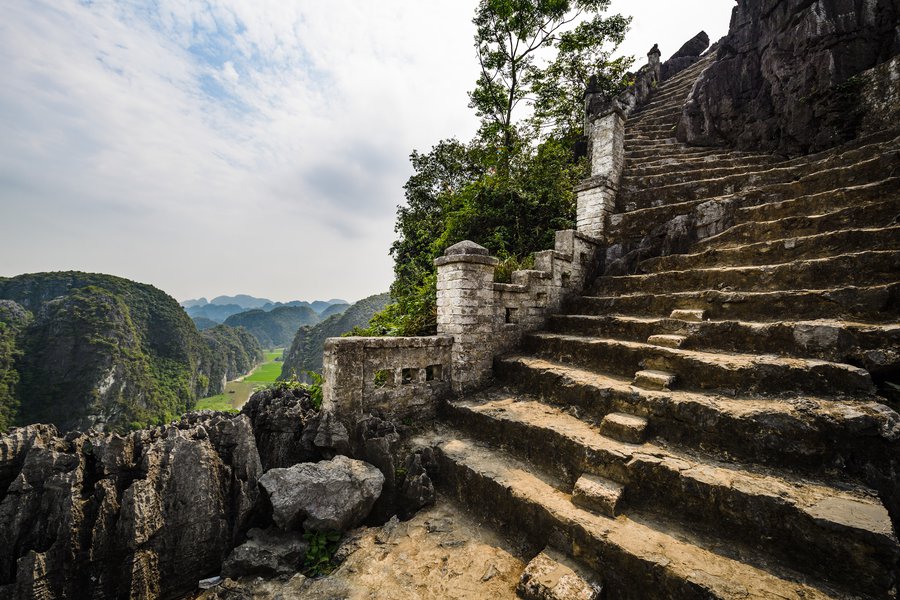 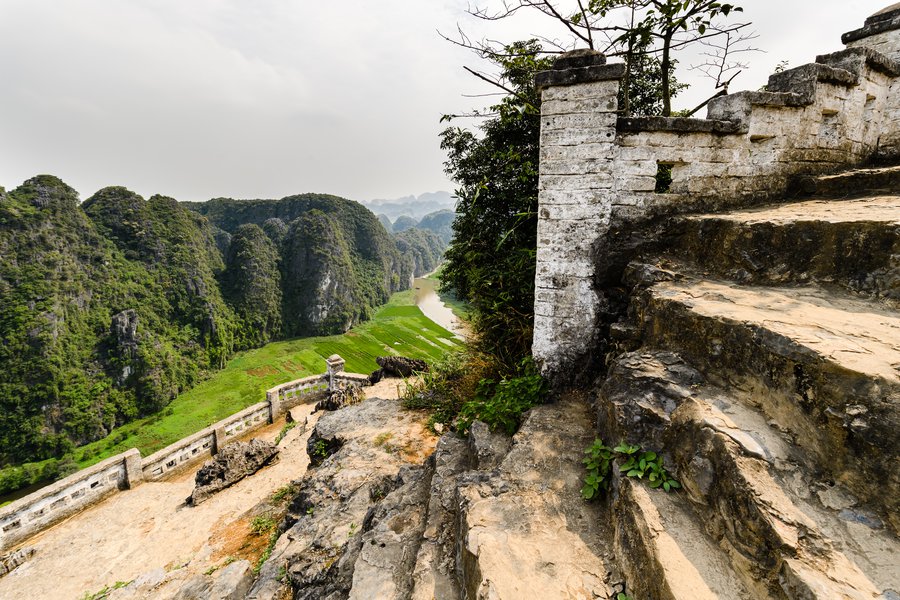 But still, coming down beat going up. 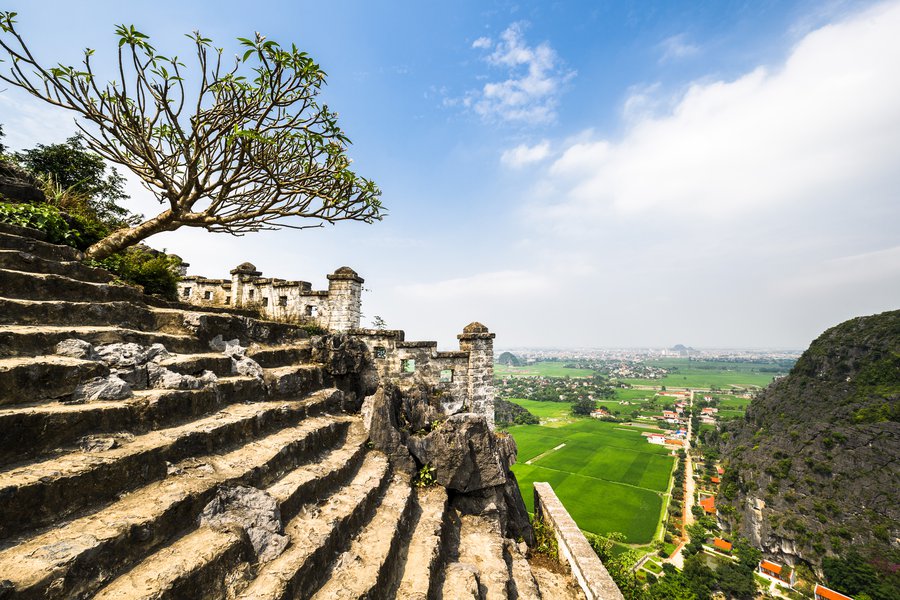 I've seen photos posted on travel sites of other times of the year, and I'm so happy we were there in this most perfect, luscious green season. We completely recommend it! 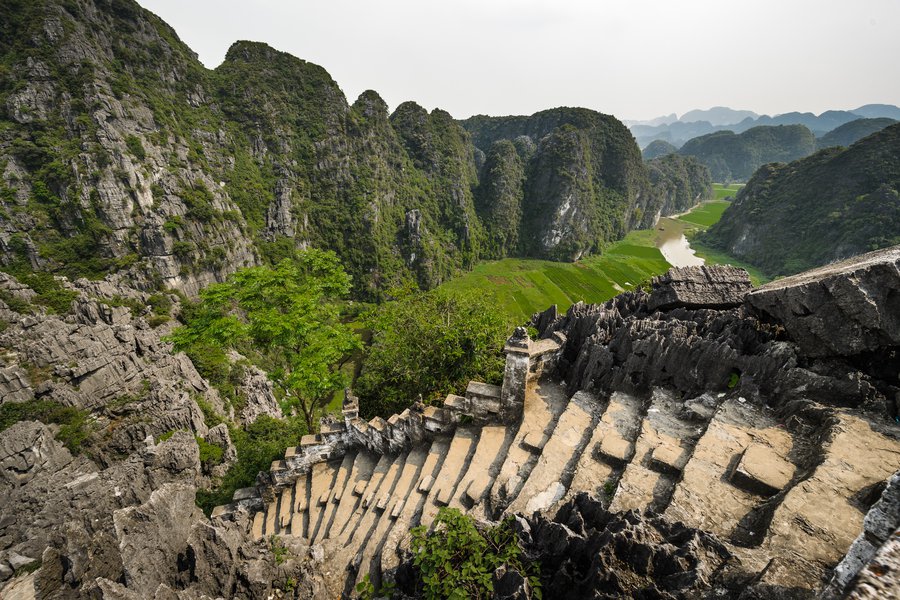