After our epic lava adventure, we sat in the car soaked to our shivering skin--so wet in fact, that we stopped to buy hair dryers on our way back to the lodge, which we used for seeming hours; at one point, mine overheated from trying to dry my sneakers. We had driven from the Fairmont to the Volcano Mountain Retreat the night before, and the rain that fell there was gentle as a breath, and nearly constant, making it intensely green and lush. Seriously, can you believe how adorable this oasis is? 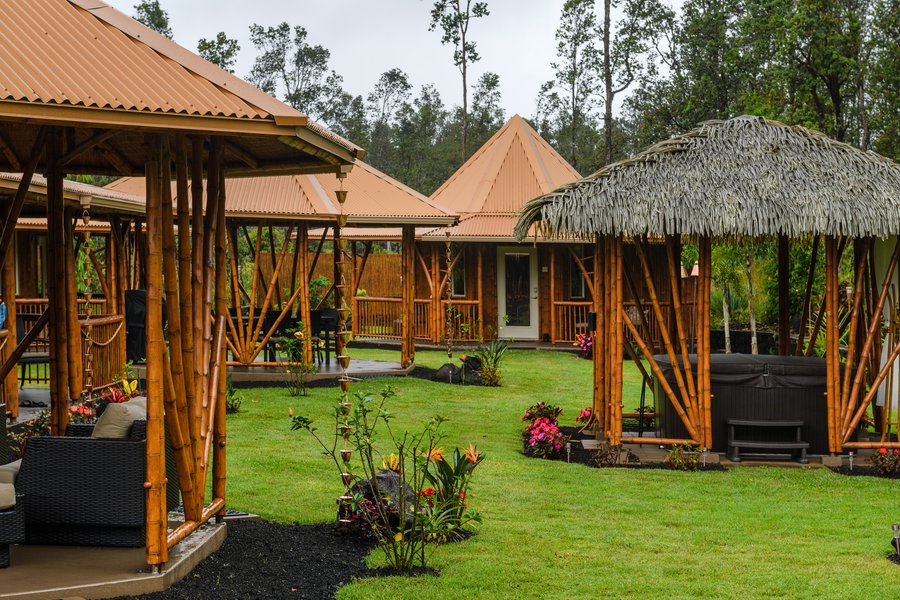 The retreat had four balinese style villas, which were beyond immaculate inside, and with their polished floors were definitely the cleanest place we've ever stayed. When we arrived, the hosts had arranged Valentine's flowers for Jan and I, and the tropical flowers were unreal. 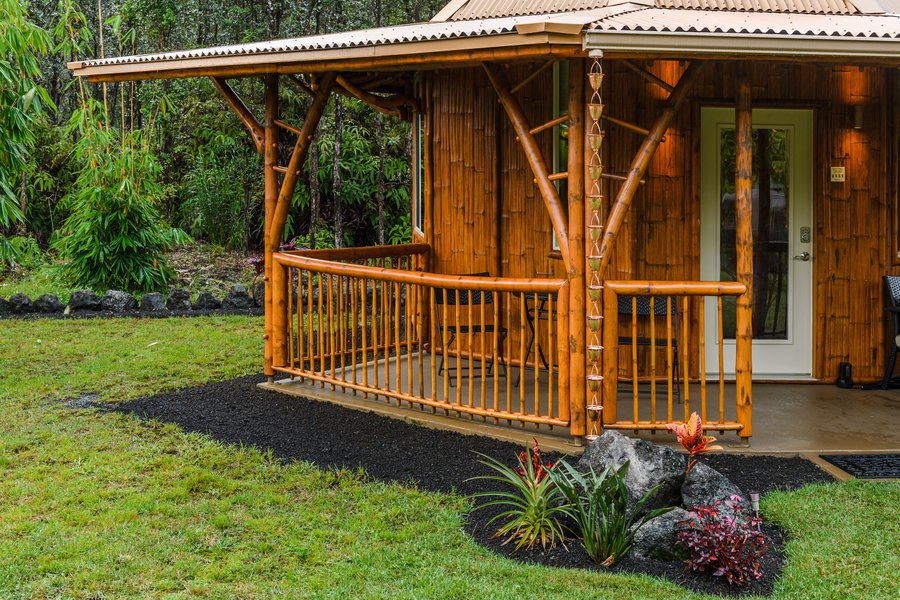 While we didn't have a ton of time to relax in the villas, I enjoyed these sweet little water fountains carrying the rain off the roof. 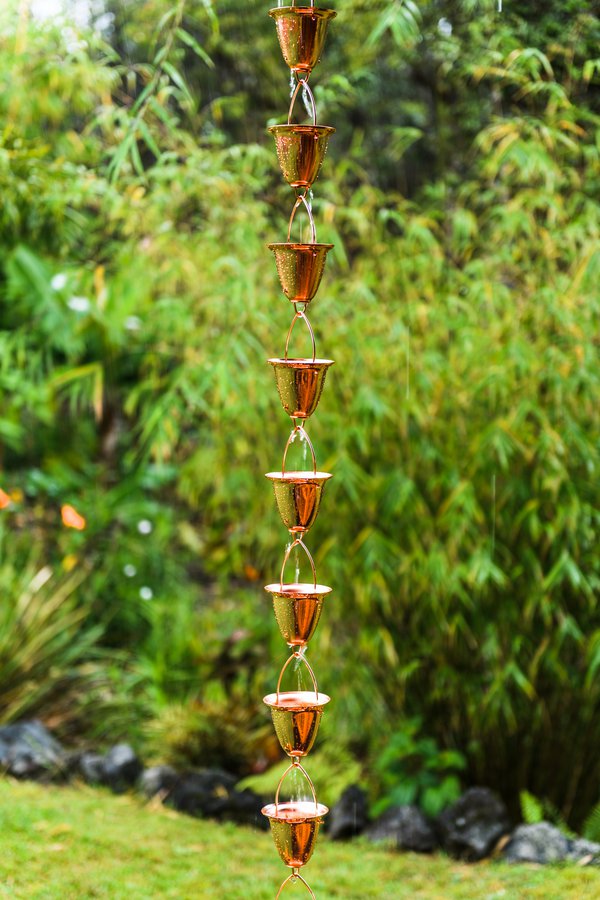 So after drying off back at the retreat, we drove back toward the town of Volcano and found a quick and surprisingly good lunch at Thai Thai; I had sweet coconut Tom Yum soup that warmed me back from the sopping mess I had been. We decided to take a look at some of the sites in the national park, but as the day progressed, we didn't have terrific luck with the weather. We started at the Jagger Museum, but due to the haze, couldn't really see the crater rim it overlooked at all. 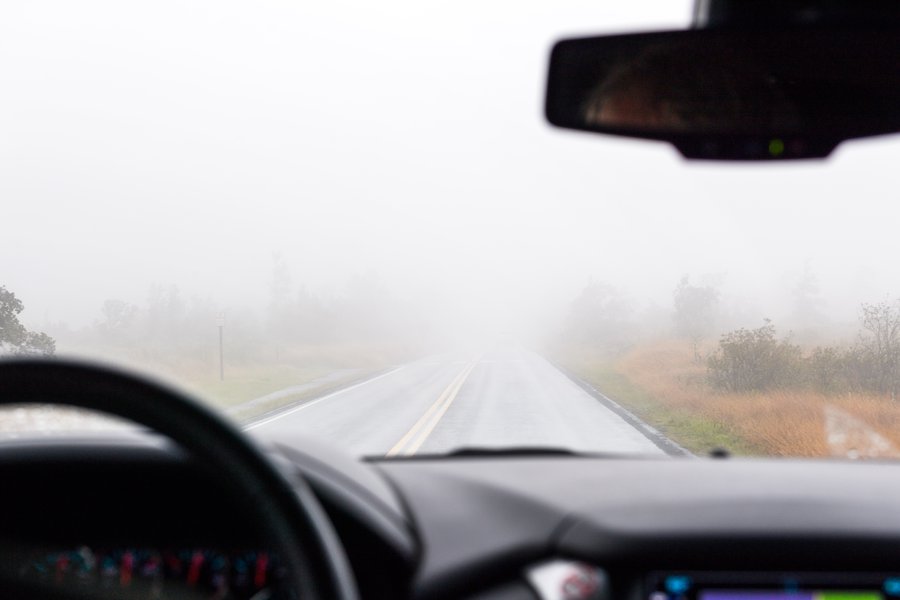 Undeterred, we continued along the Chain of Craters road, following along in our guide book. The road was fairly deserted, but every so often, the steam of the vents rose along the drive. 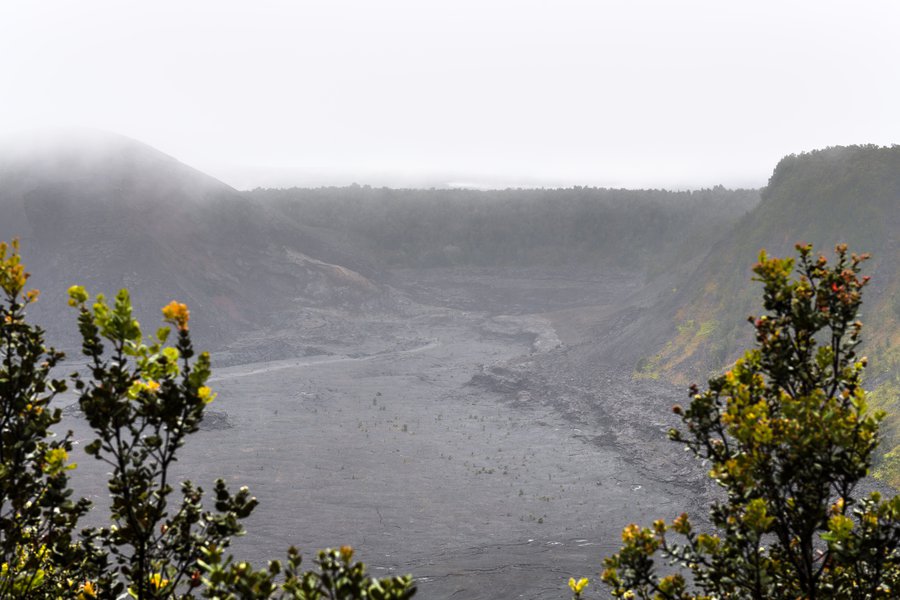 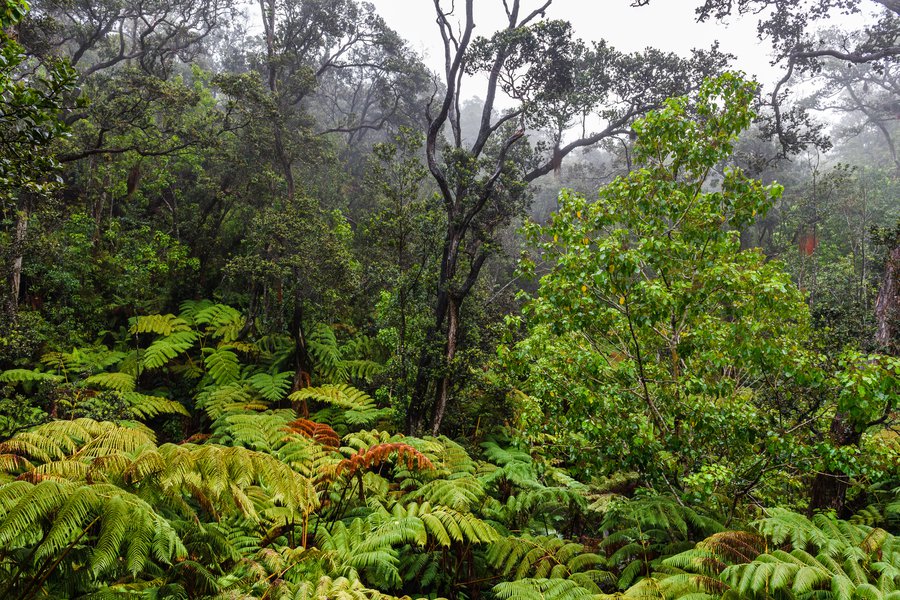 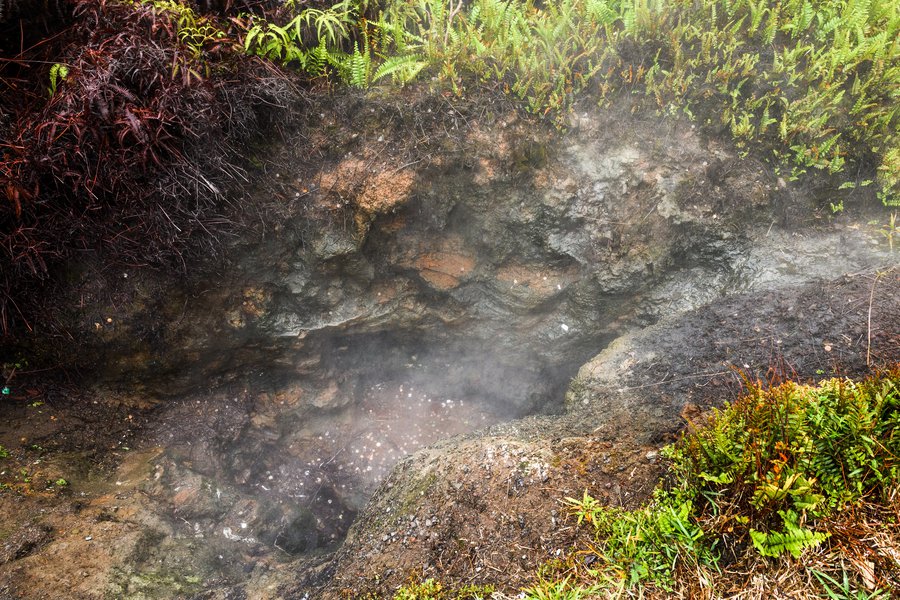 Some favorite craters, long dormant it seemed, were  fairly unmarked and hard to find, including the Pauahi Crater (the rich, black one above) and Devil's Throat by the Hilina Poli Road, seen below. We couldn't believe how deep some craters dug, and I was a bit scared to go near the edge, since the lava was dry and crumbly, so full of air after all these years. 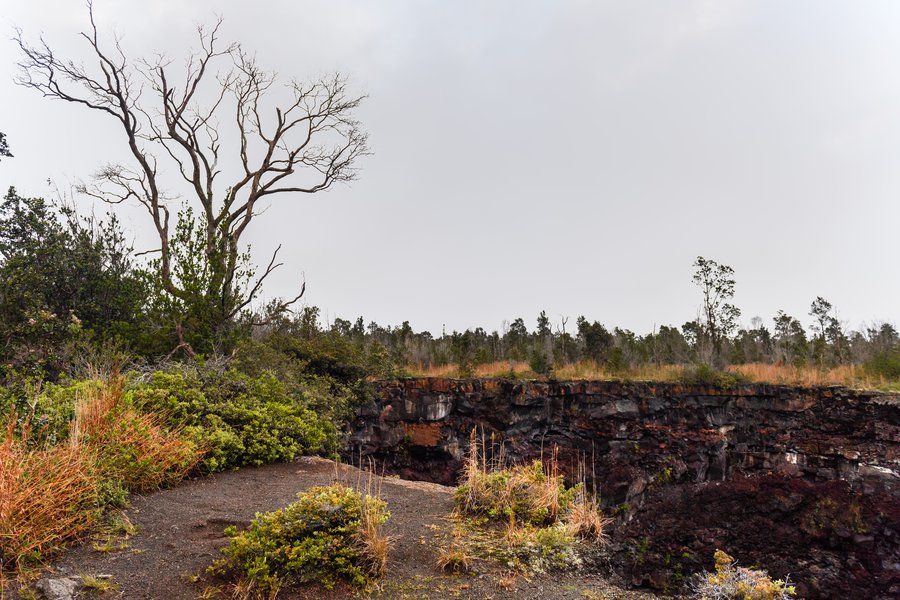 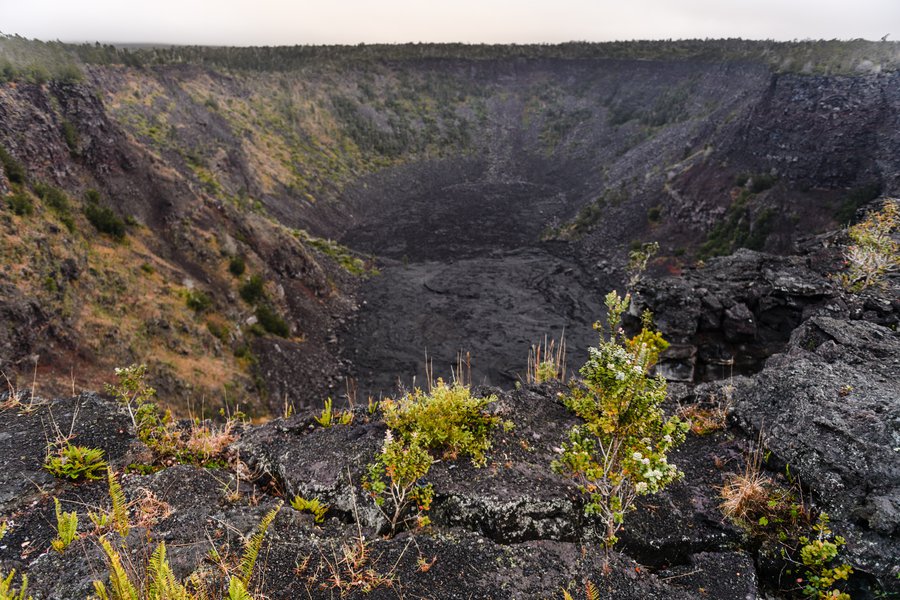 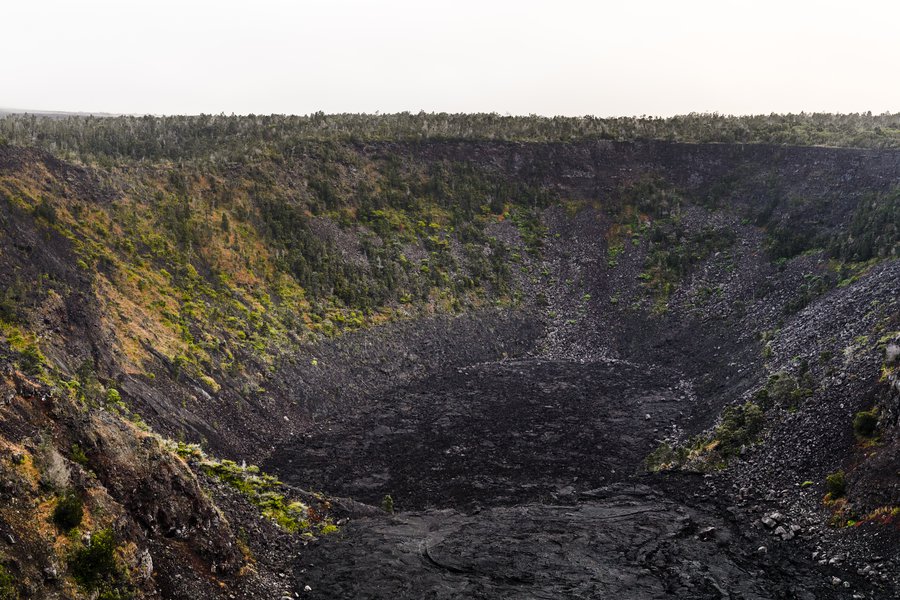 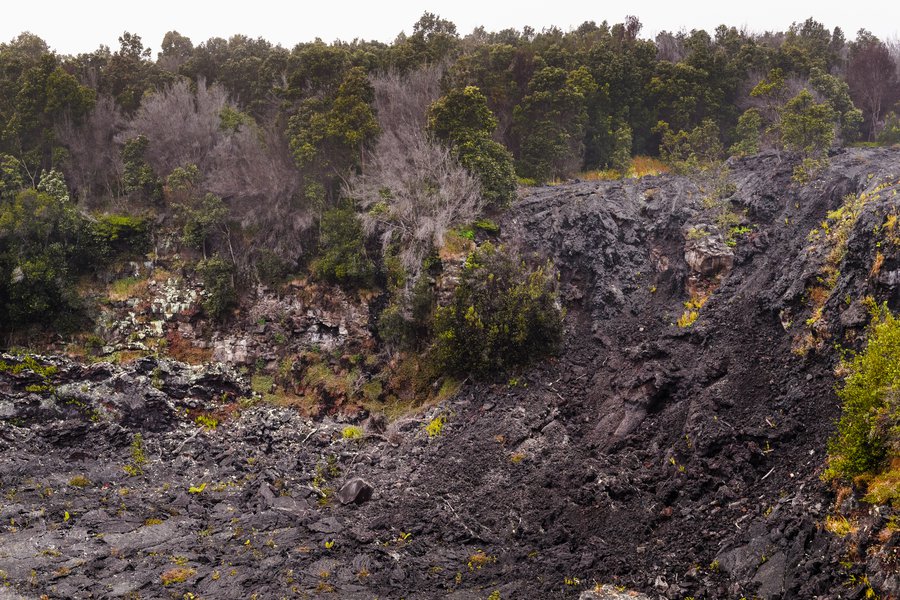 By this time, my exhaustion from the 3am alarm was setting in so I was happy for the drive by theater, instead of actually getting out of the car. Just look at those hazy eyes! Walker, however, diligently got out at about 10 craters. 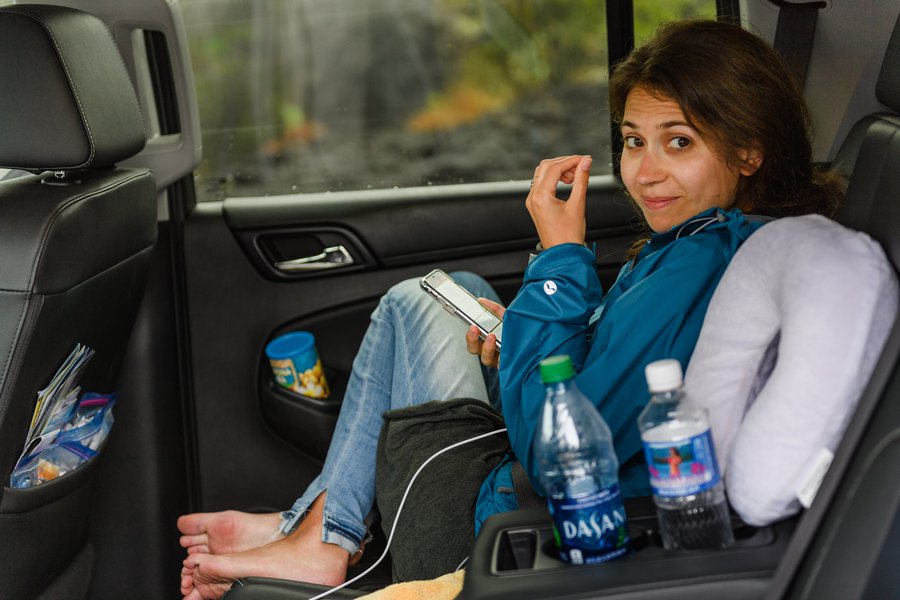 I did muster energy to get out when we arrived at the Thurston Lava Tubes, one of the biggest 'attractions' of the park. When lava flowed through hundreds of years ago, it cleared a path through the rock (still don't really understand how it left and didn't harden there, but that's beside the point). Now, a short hike takes you through a tropical forest which surrounds the hidden tube. 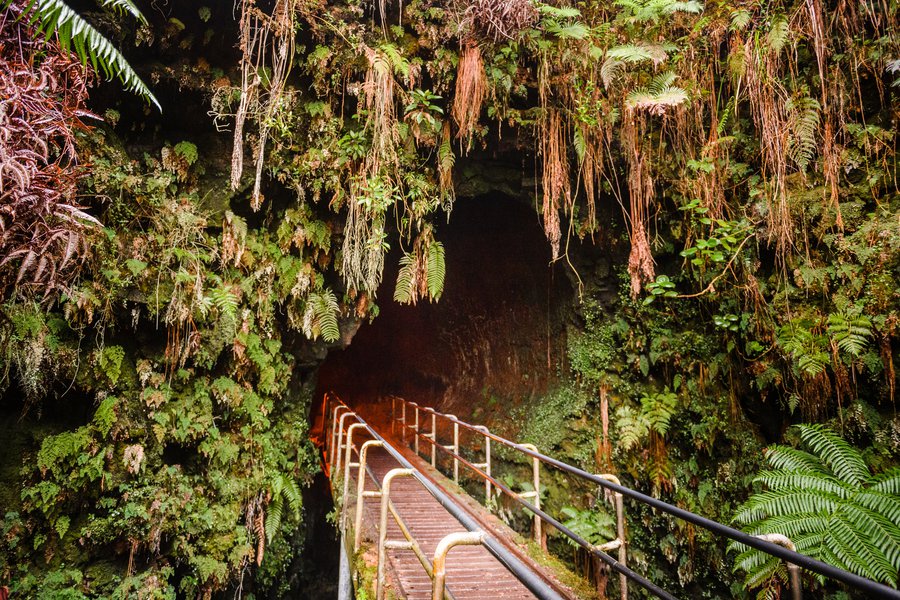 Inside, the tube has stalactites hanging and lights to guide the way; honestly, it was a cooler experience than I expected as it was longer than I had thought. 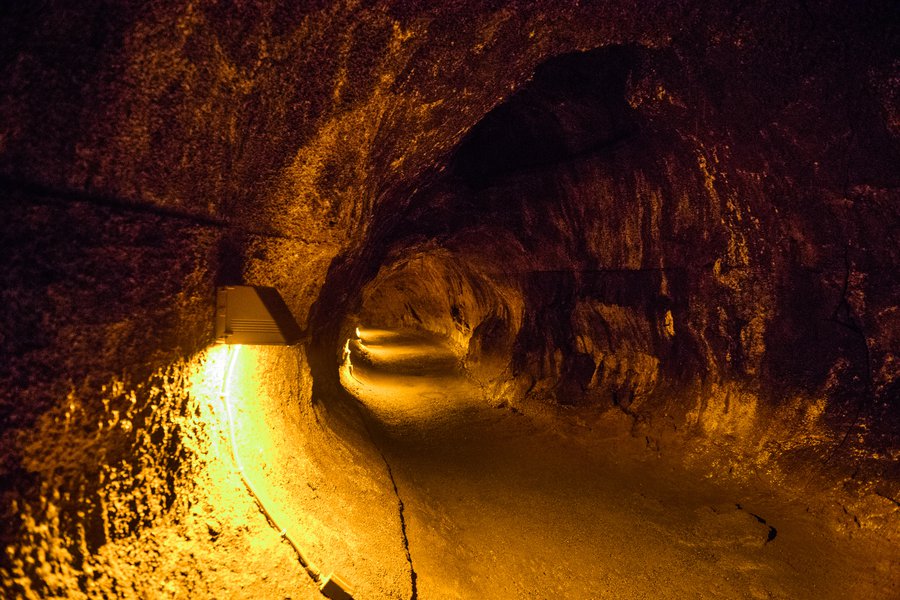 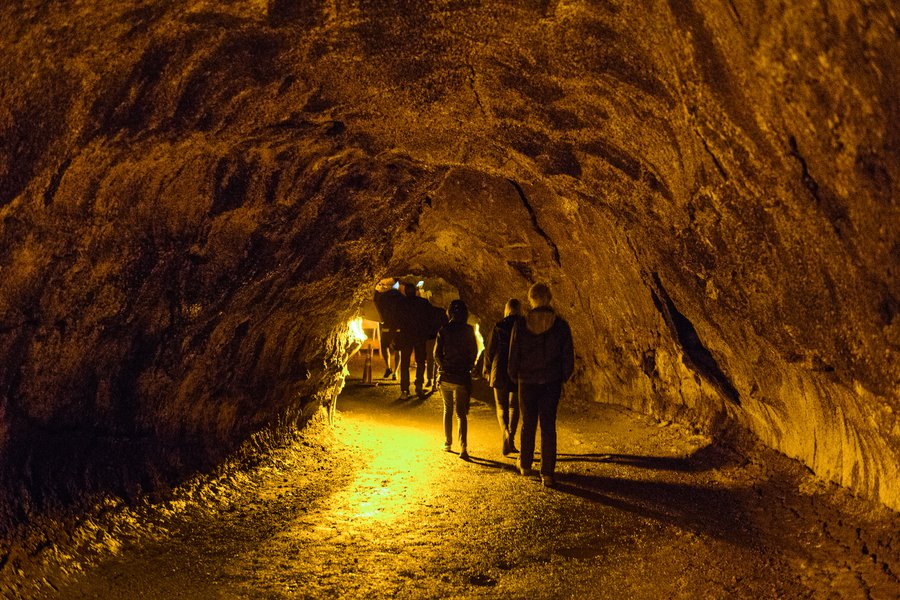 At the other end, a short walk through more of the same vivid landscape brought us back to the car, and relief for my legs, fatigued from the morning's 6 hours on the lava fields. 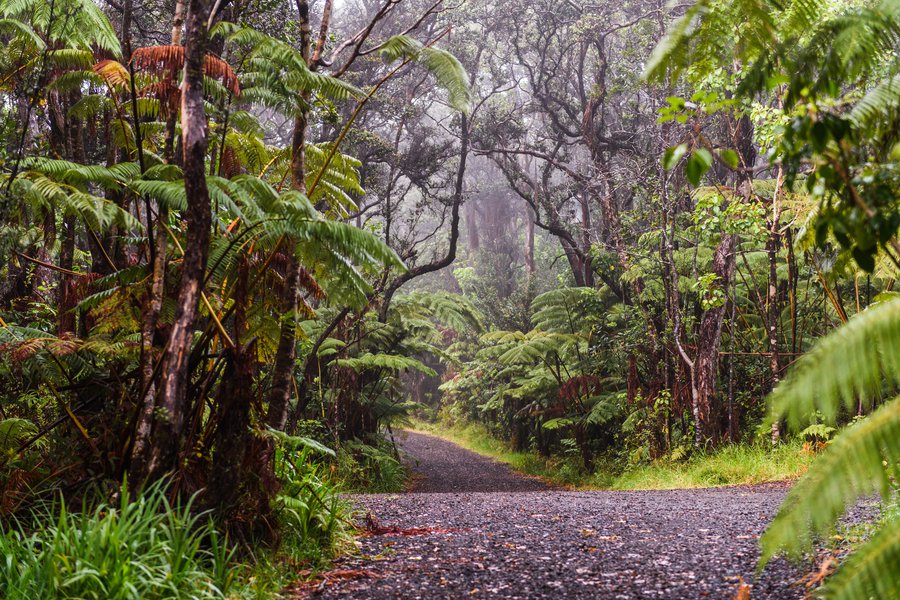 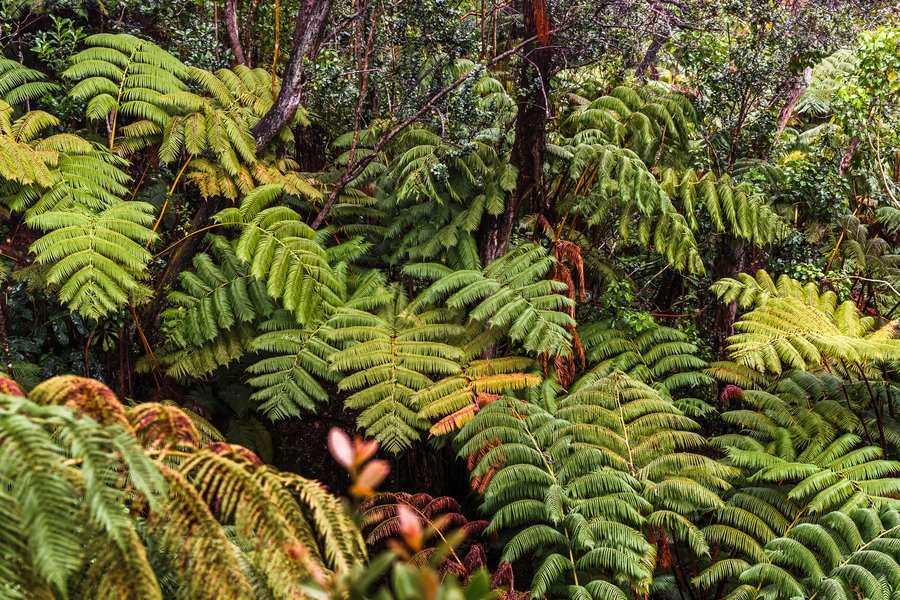 The night before, we had stopped at the Volcano House for dinner at The Rim, the restaurant in the park's only lodging. The air was clear and we managed to see this orange cauldron's embers through the air while we ate. The view literally overlooked the cauldron, which was probably 800m away. 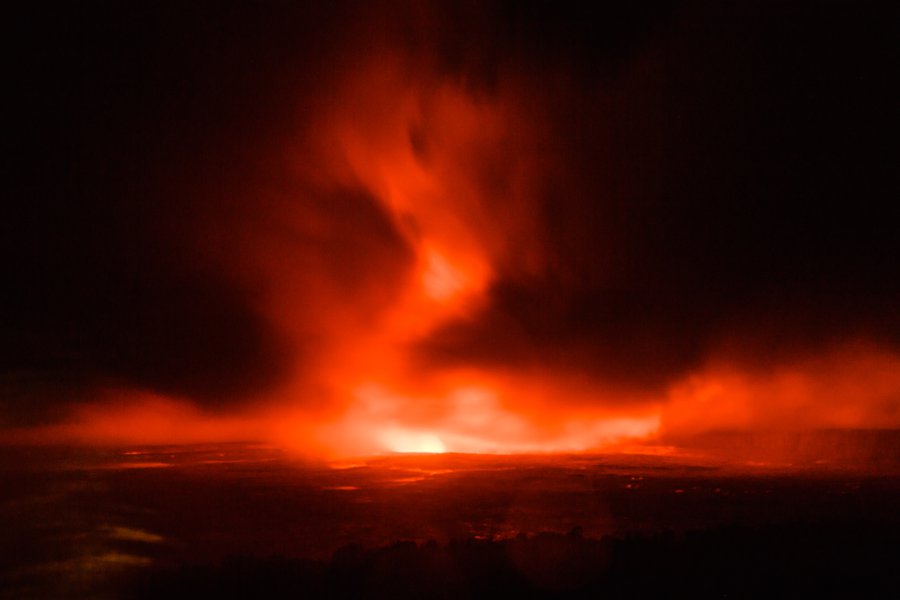 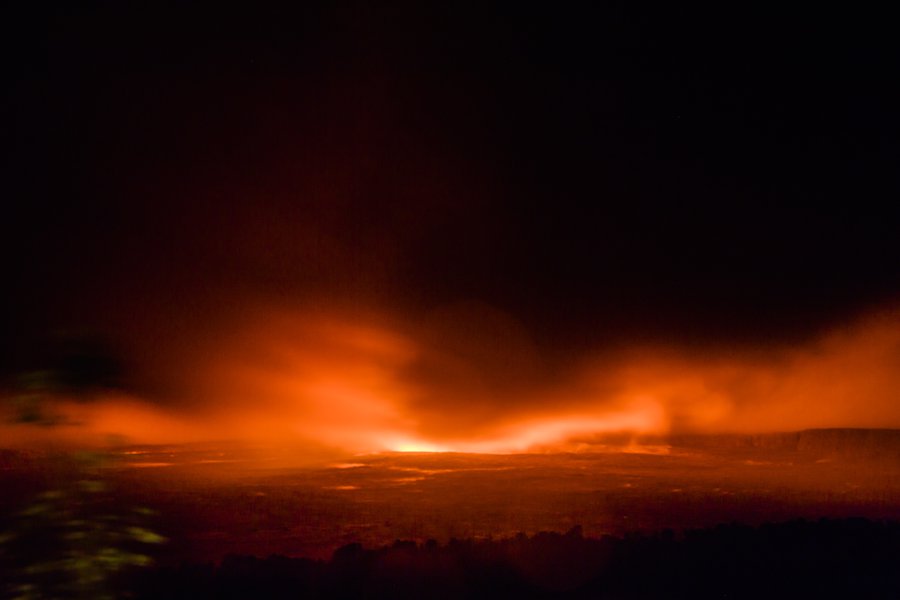 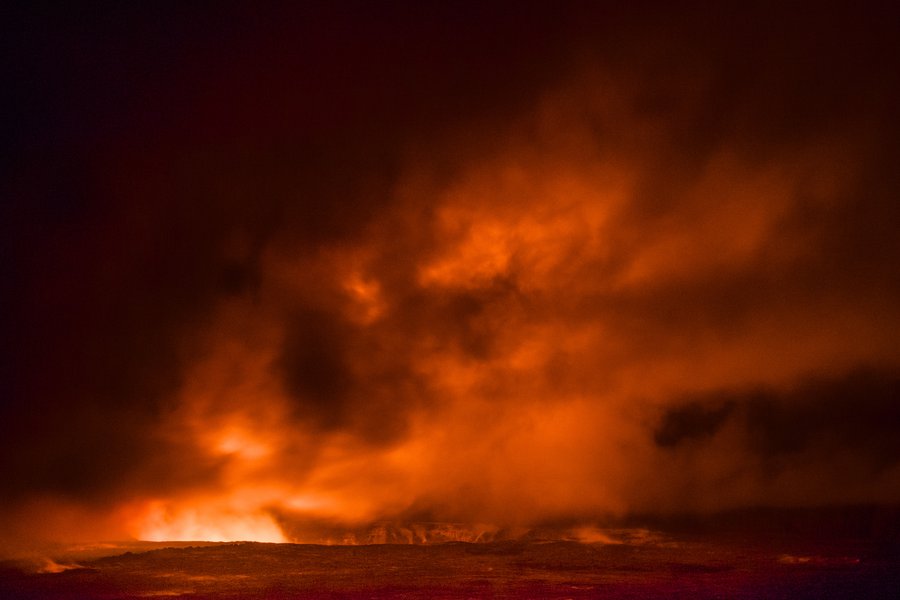 However, after our day driving the Chain of Craters road in the fog, Walker really wanted to go back. So after dinner at the Kilauea Lodge, he persuaded us to go back for a late night, 11pm viewing. I'm happy to report that I again stayed in the car most of the time, the air biting cold, but Walker did manage to capture his clearest view of the trip, the beautifully defined edges of the crater. 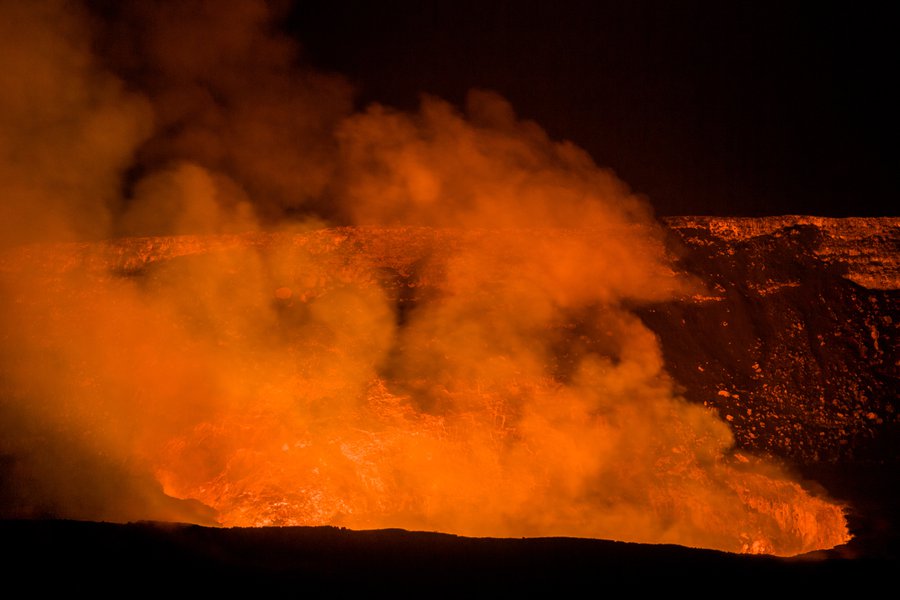 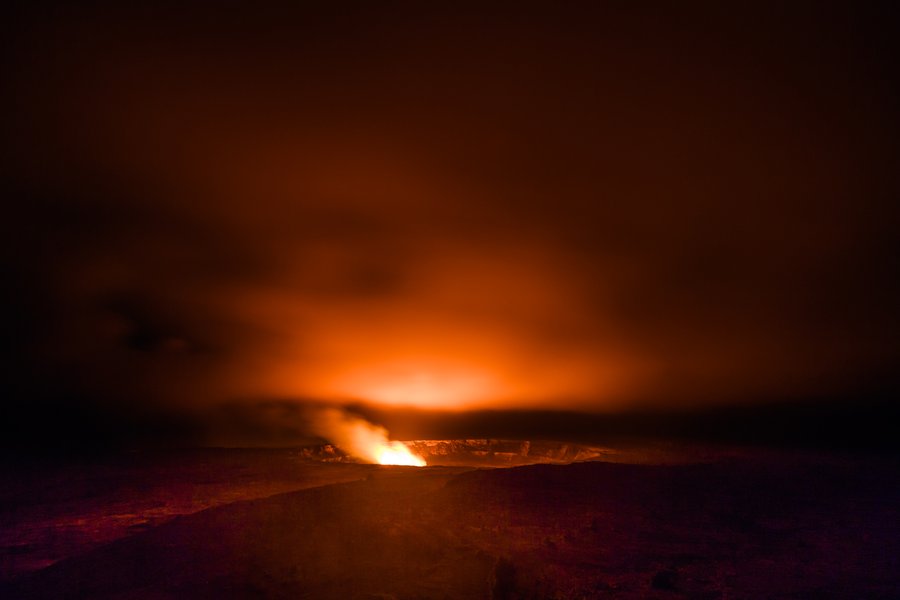 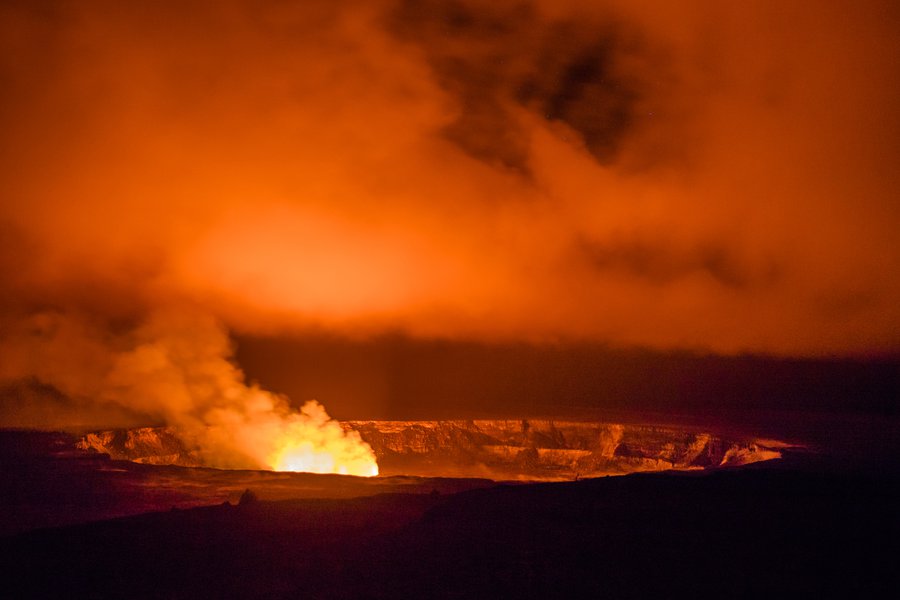 It is only now we realized just how fortunate we were, as the Volcano House is temporarily closed due to the possibility of steam clouds and falling ash. To stand at what feels like the open heart of the earth and watch her power and heat was a breathtaking privilege we don't take for granted, and if the park reopens, we cannot recommend enough. We are so grateful to my in-laws for taking us on this unbelievably amazing trip!