Months ahead, as we strung Christmas lights, Walker knew where he wanted to go for a warm vacation: to see  volcanoes. And months after, now in June, what a wonder and what timing that he had such a premonition of discovery, as the volcano fields dried up to blister other spots on the island shortly after we left. 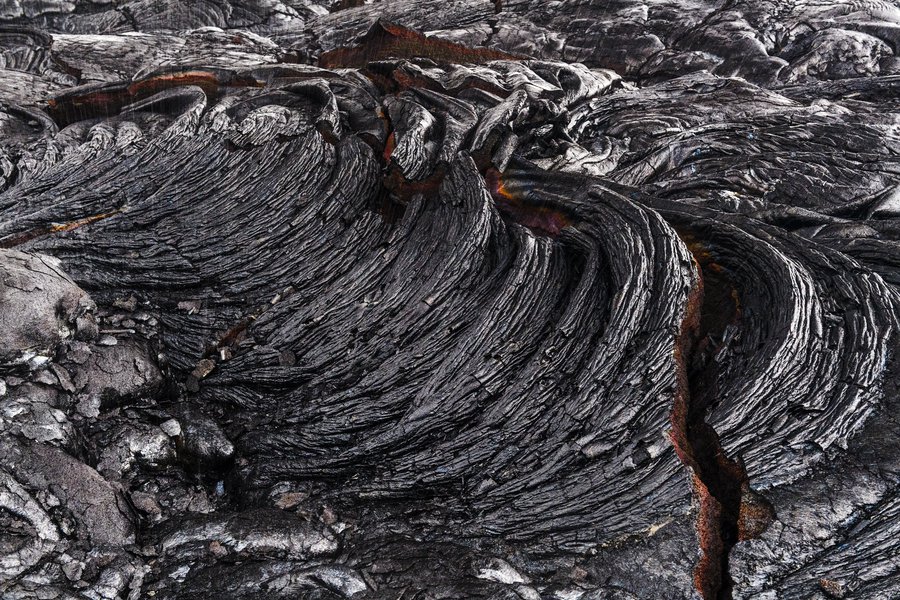 Having driven across the island toward the southeastern corner where the big volcano Kilauea sits, we arrived at our cottage (more about that later) to soft drizzle as gentle as sheets swaying in the breeze, rich green grasses, and silence. We had booked, at the suggestion of our hosts, an early hike the next morning to see the lava, so tucked in early for a few hours of sleep. When we woke, the sound of rain on the roof, and cold wind when I opened the door of the cottage. We had heard of a recent accident on the lava fields during rain, and my heart fell into my sneakers as we layered on all the waterproof gear we had. 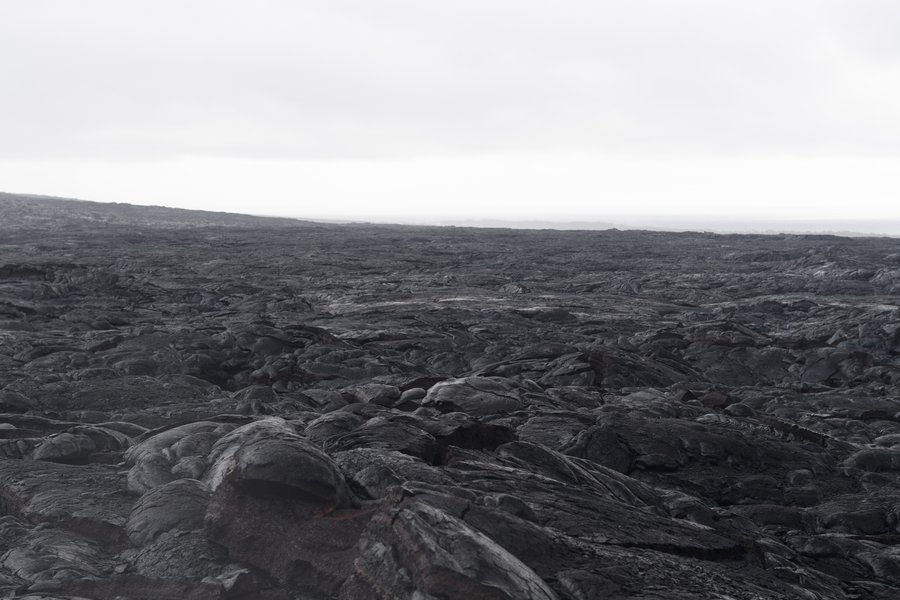 As we drove, the rain's beat became vibrato on the roof of our car, and then, just as we followed our guides into our parking spot, the sky unzipped, and rain as loud and thick as I have ever seen gushed out. Honestly, the volume of water was enough to make us nearly turn back, which my in-laws wisely did, but Walker had come for lava and he was determined.

The water was so fierce and the air dark in the night that we don't have photos from the first few hours of the hike (all the above are mainly from the same hike back). We layered on thin gloves to protect our hands, should we fall, from the layer of silica on the dried lava top that our guides from Epic Lava Tours distributed. 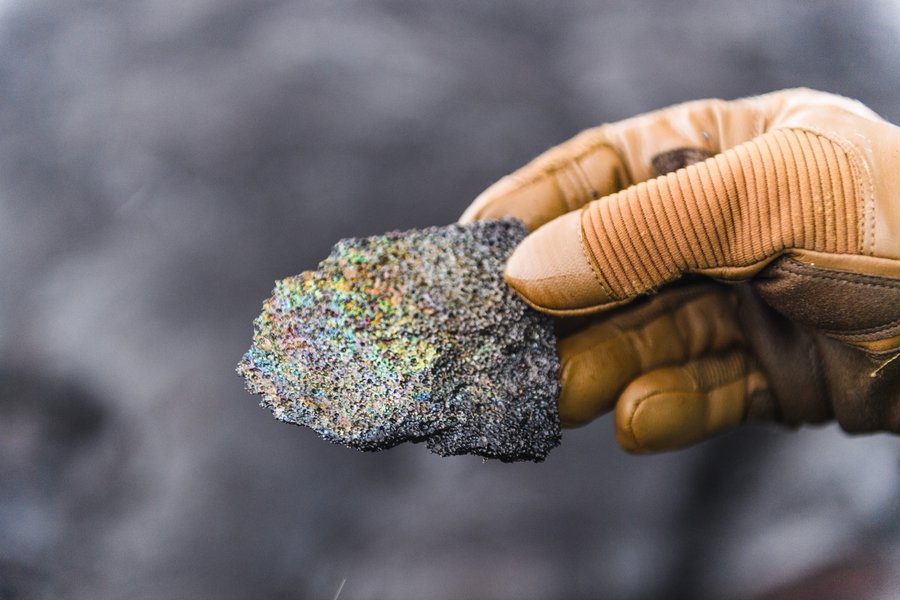 We had headlamps, but others took out their provided flashlights and ponchos and umbrellas, and our group of about 15 with 5 guides headed across the black, dark fields. 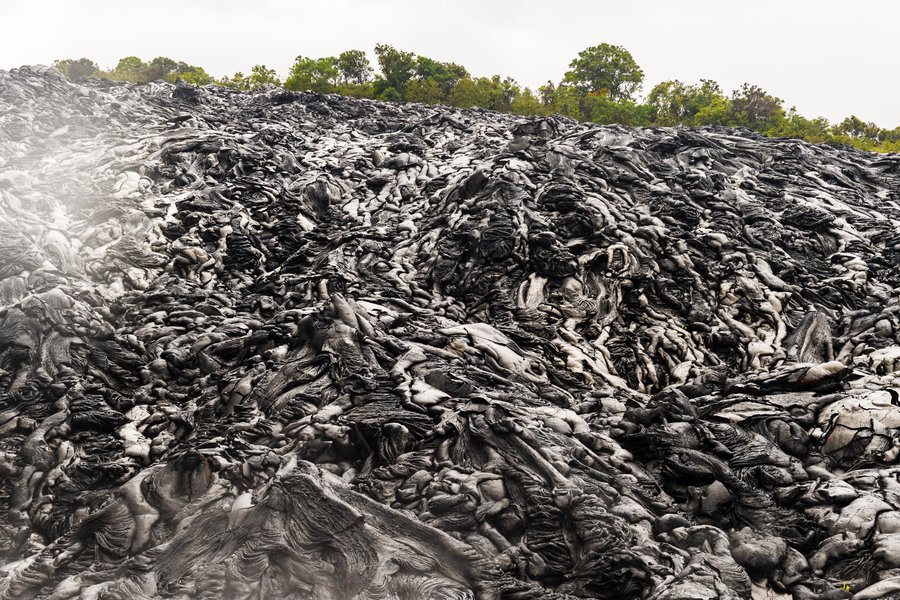 We walked step by step up and down over the jagged rocks as the rain soaked through our shirts. Once in a while, we would have a letup and breathe, and take a look at how far we'd come, 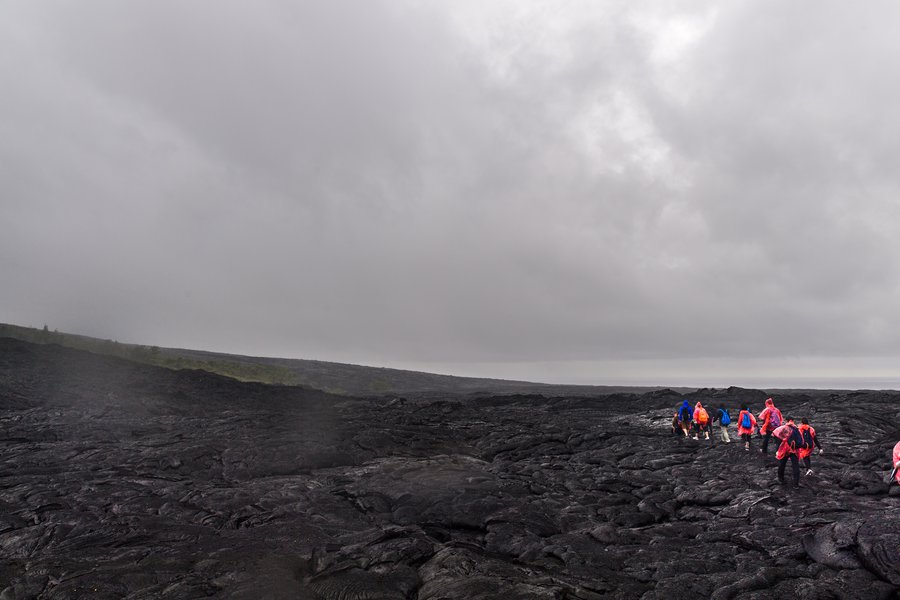 but mostly, Walker and I talked with John, our actually-fearless leader who spun tales as vibrant as melted earth and comforted my inner quaking with his emergency plan of action. We walked toward the dull, dim orange glow ahead for about 3 hours before we approached the open oven of the earth. 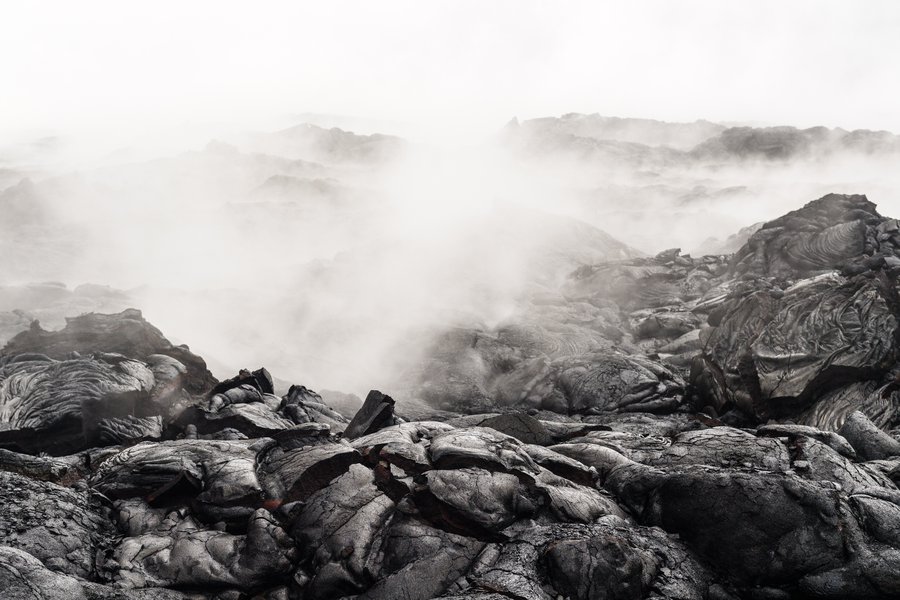 And it rained on and on. We knew we only had about 45 minutes at the lava itself, but had no choice but to stand under an umbrella, protecting the gear while the rain soaked our shoes to mini puddles of socks. 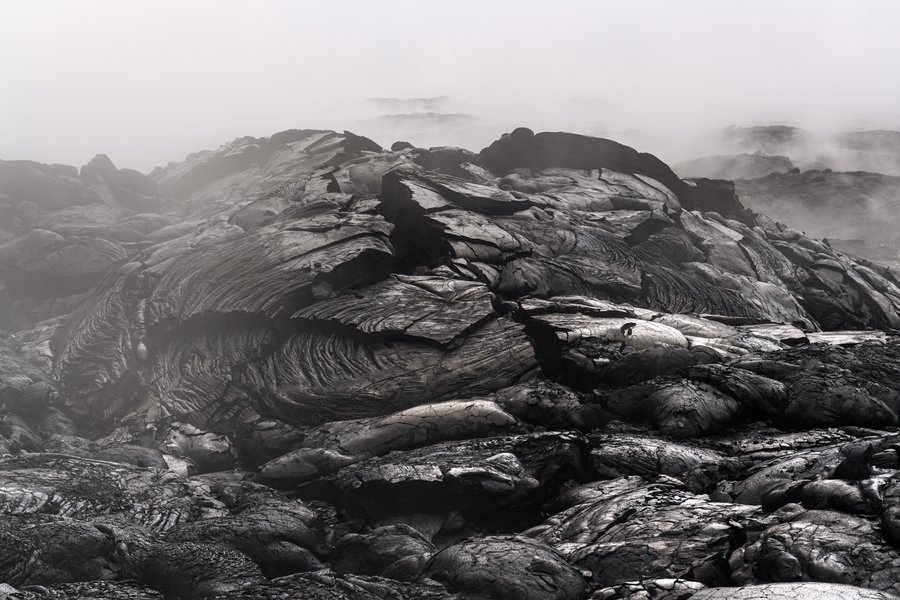 I may or may not be wringing my gloves out as I smile here. On the nice side, hiking the lava fields can be excessively hot once the sun rises, so the dampness cooled us the whole time. 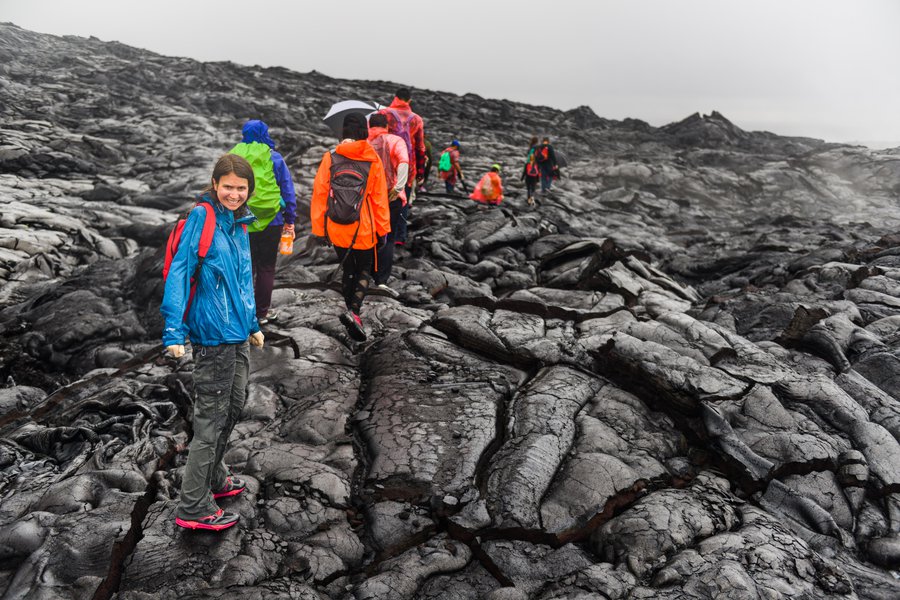 When the rain hit the bleeding lava, it vapored instantly and we were told to stand still so as not to get disoriented. You can see this effect here from one of our guides. 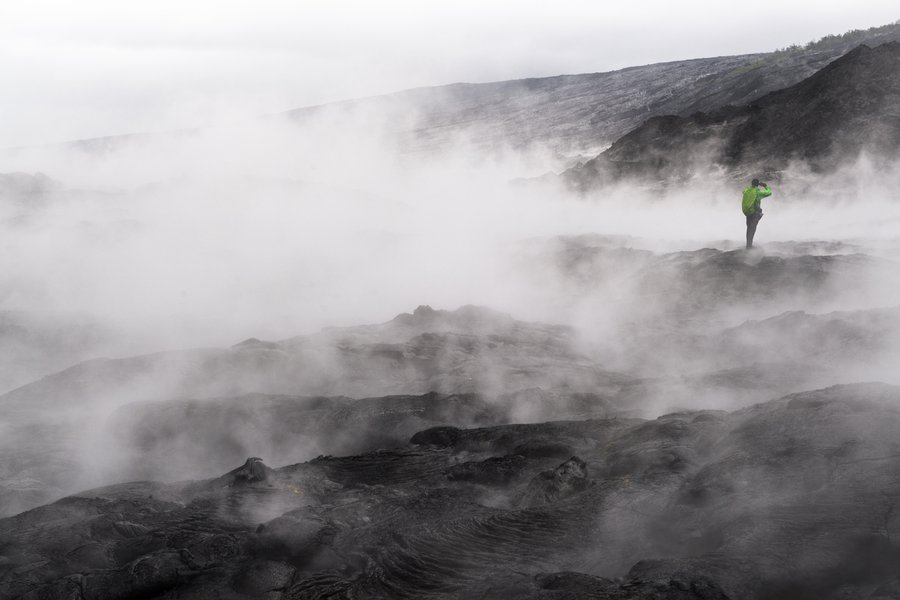 And then it slowed for just a few minutes, a blissful drizzle. Walker strung on his cameras and walked to within a few feet of the lava, which oozed much quicker than I expected, down the mountain. 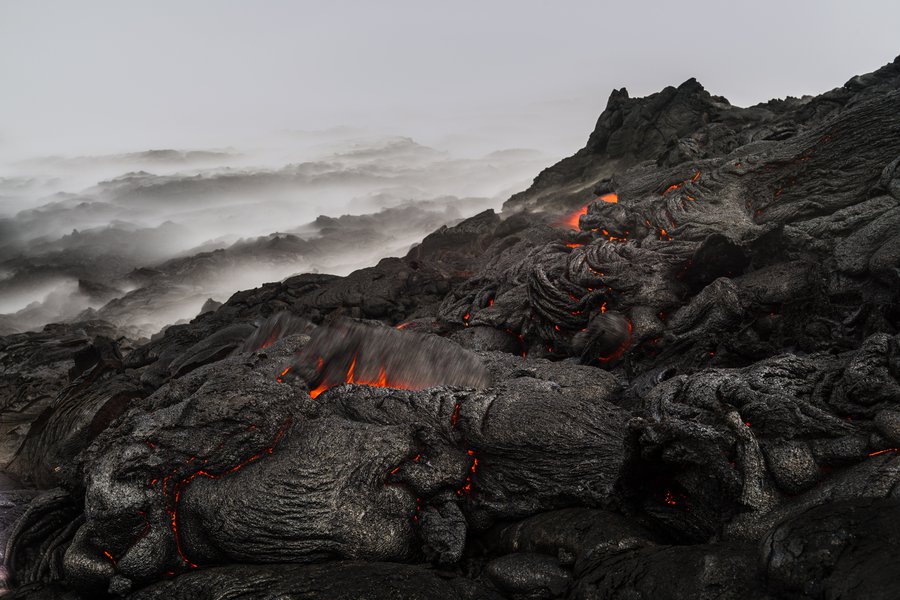 The color and textures changed each moment, the heat like a magnetic field pushing out. 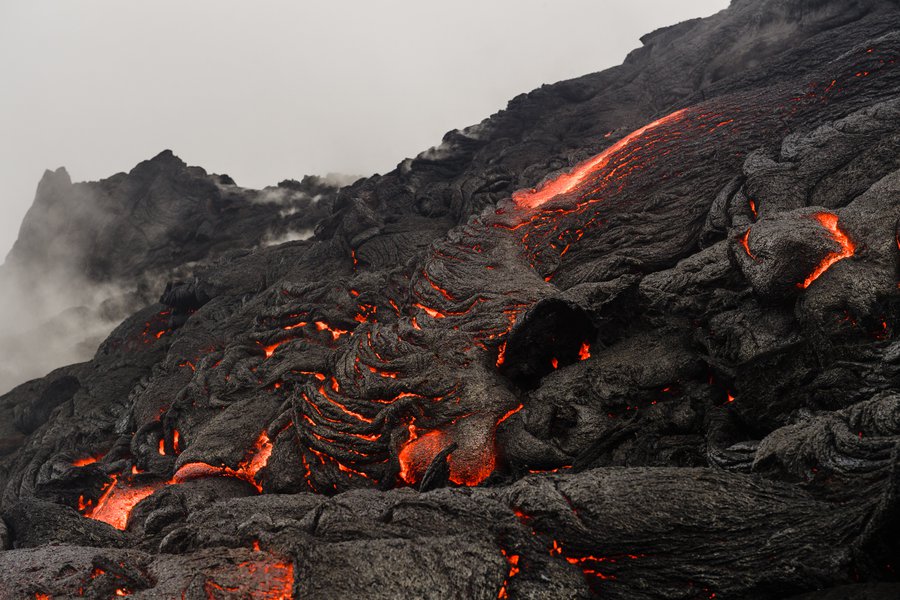 And we saw why people get addicted to hiking the volcanoes; the flow's shape overtaking everything in its entire path, the glow beneath us. 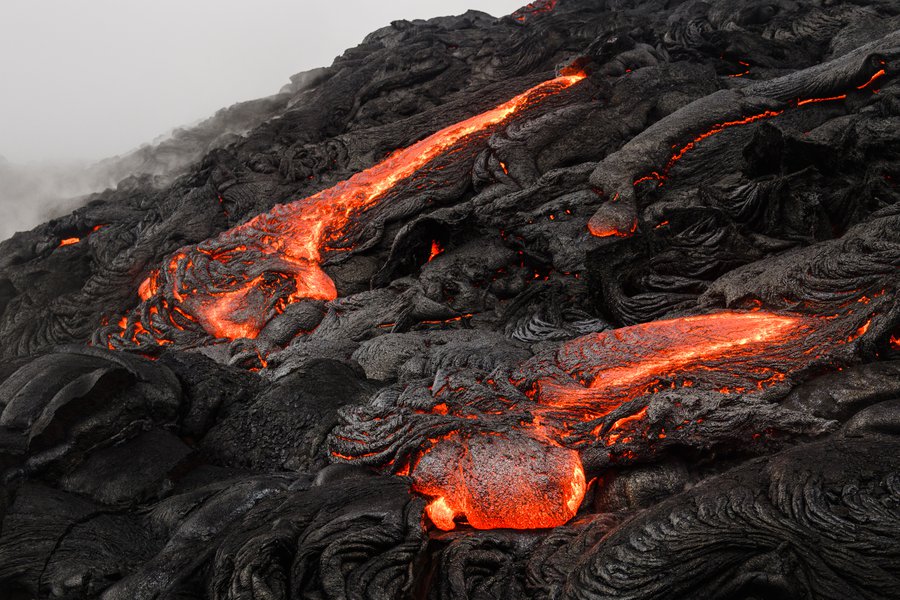 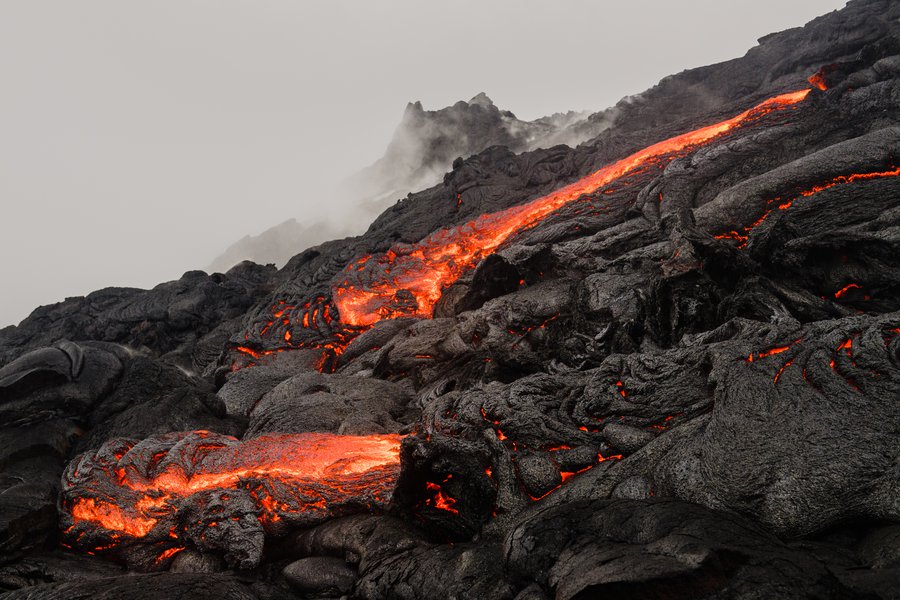 In the 10 minutes of no rain, we had no idea if the photos even took: the steam was thick and the oven hot temperatures were drying our tour-mates clothes while Walker held the shutter and I crossed my fingers the camera didn't melt. 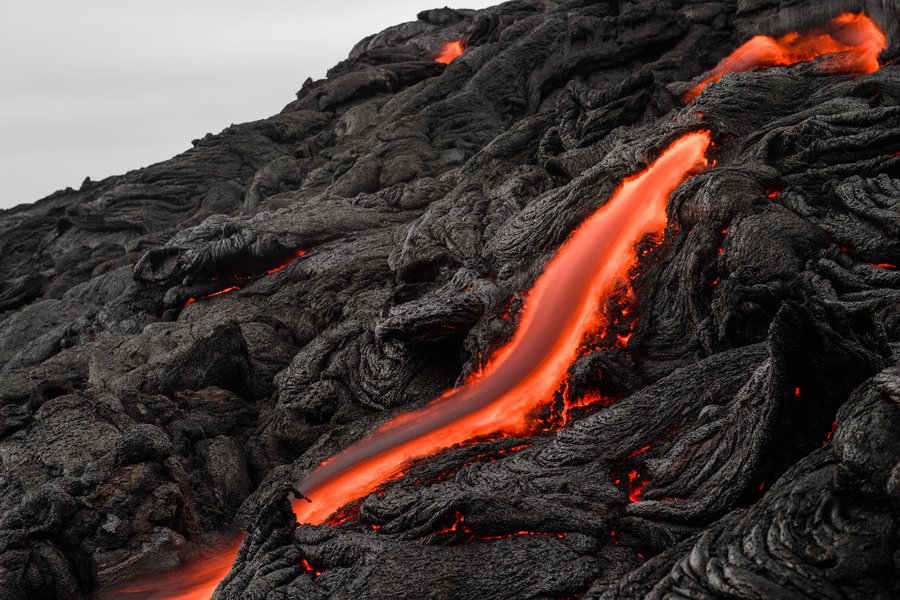 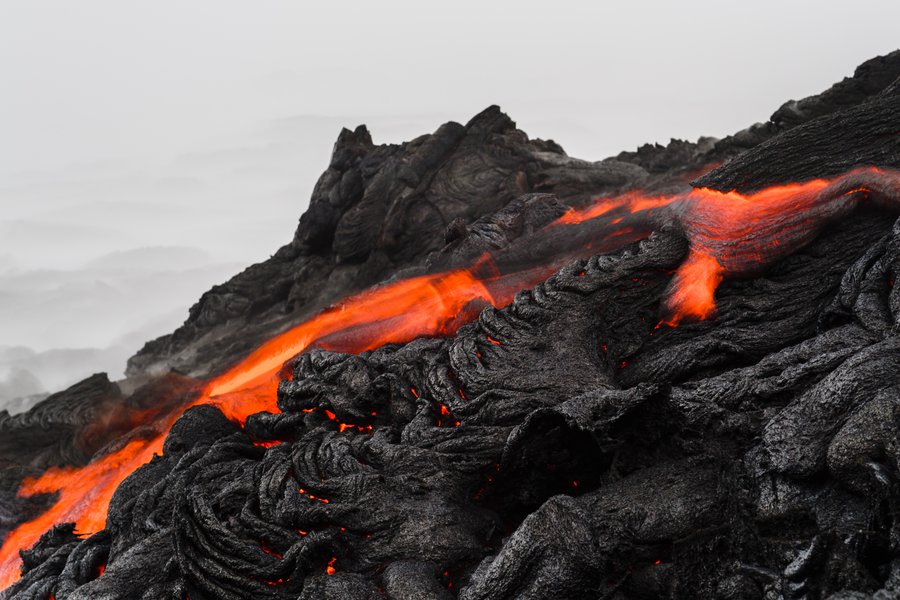 The ribboned crust of lava we followed back was like meringue, airy and tender, its natural roped patterns beautifully ornate. 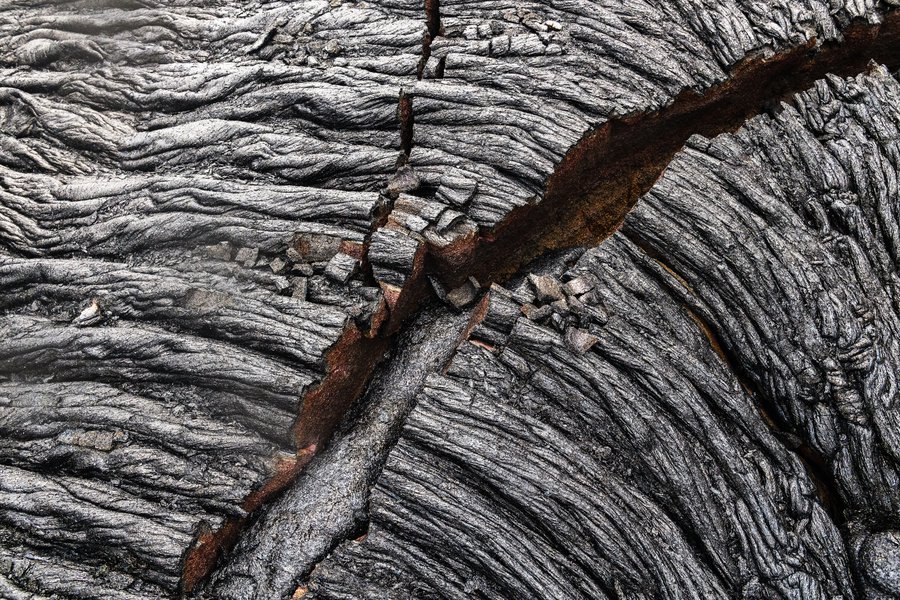 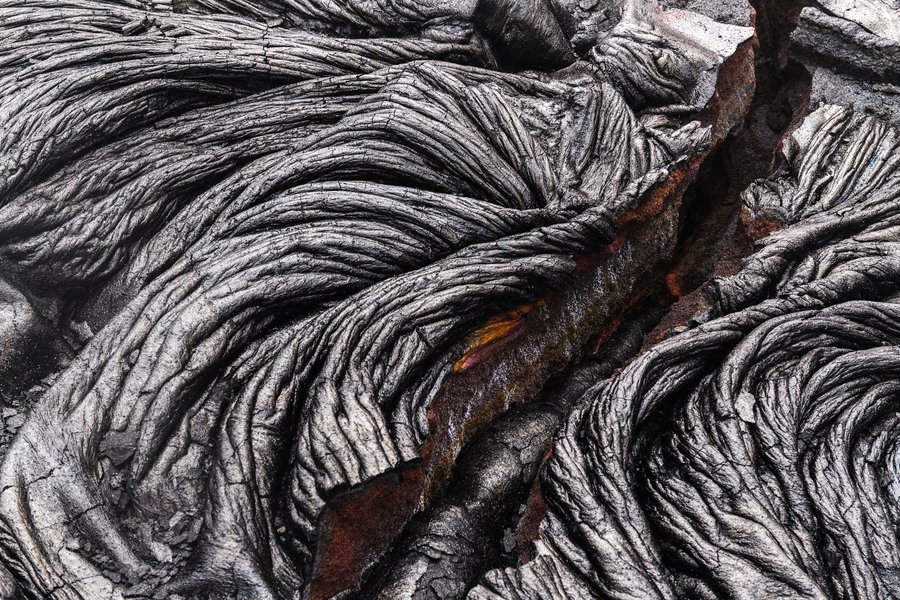 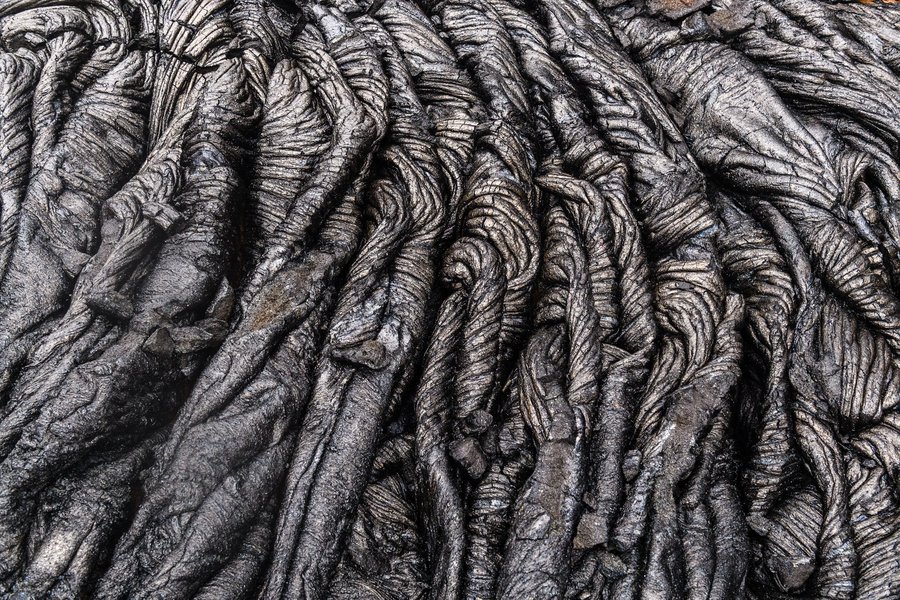 We are watching with sadness now as Kilauea has erupted in fissures far beyond where we hiked, and grief with those whose homes are destroyed and those who must leave from the heat of Pele's breath. 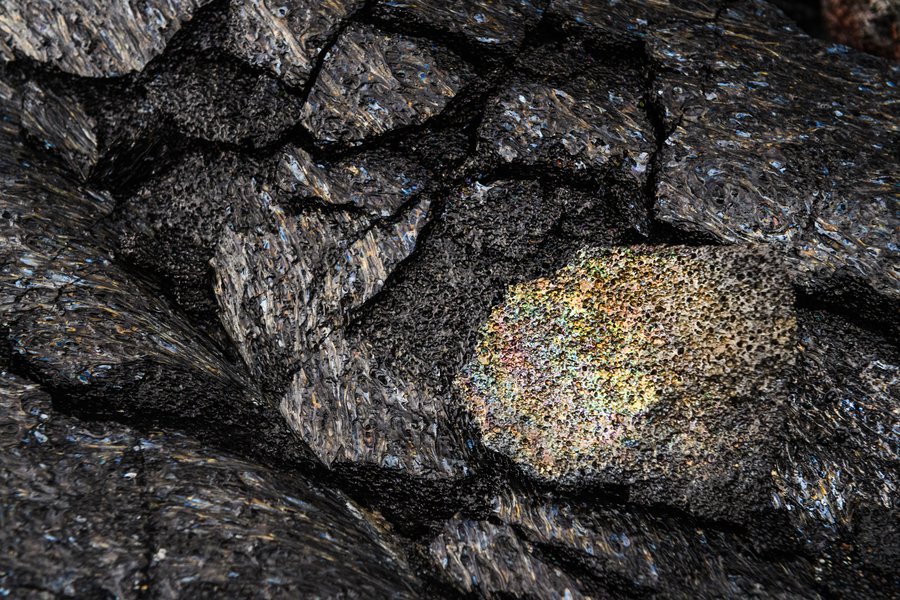 Epic Lava guided us safely with the most experienced guides on the island, and we're so grateful we chose to hike with them. One of the guides is actually one of the only humans to have survived falling into lava (which happened when he was working for the USGS, not as a guide). 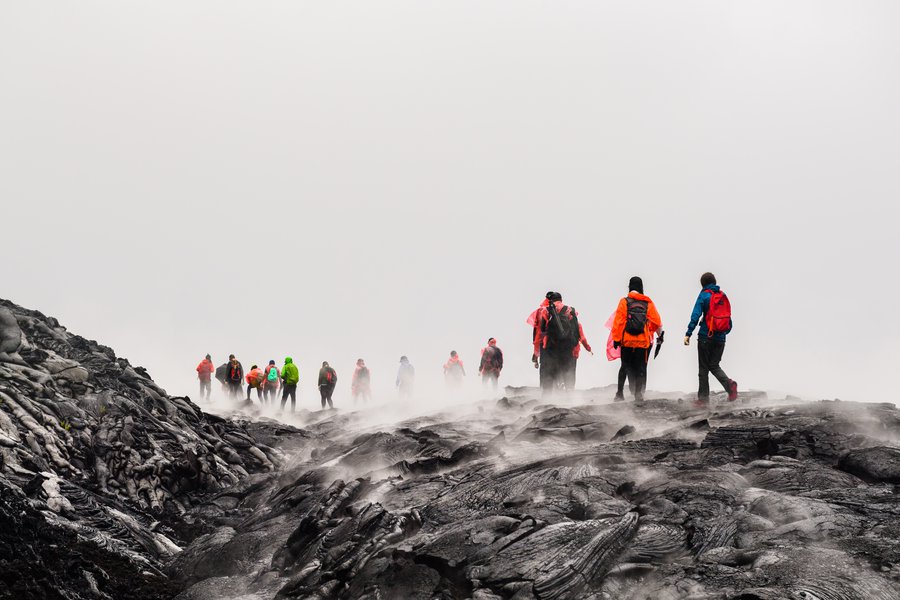 In the end, this was one of the great adventures we have undertaken, to feel in awe of the earth's power, to watch her crust formed in front of us, to approach the mystery of her molten core.  What a gift. 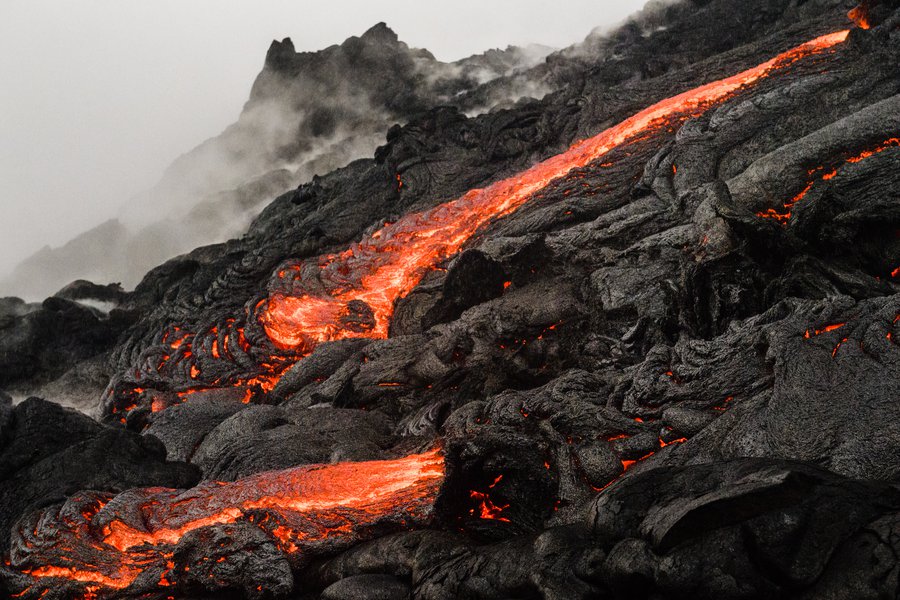