The air is bright cold. That is how I'll remember it. And noise through the air is so loud I almost reach my mittens to my ears. The dogs just want to run. They are made for this and they are pulling and squealing to be set free to run. 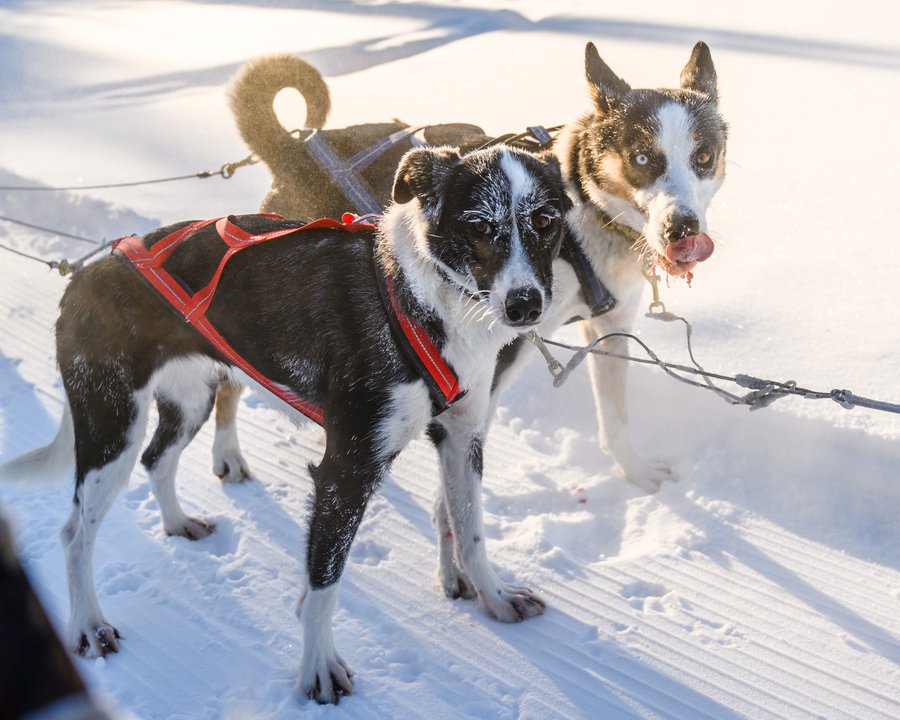 I'll admit, one of the deciding factors in choosing Lapland as a destination was the appeal of mushing huskies I saw in all the photos; something about it seemed so far away from city life. 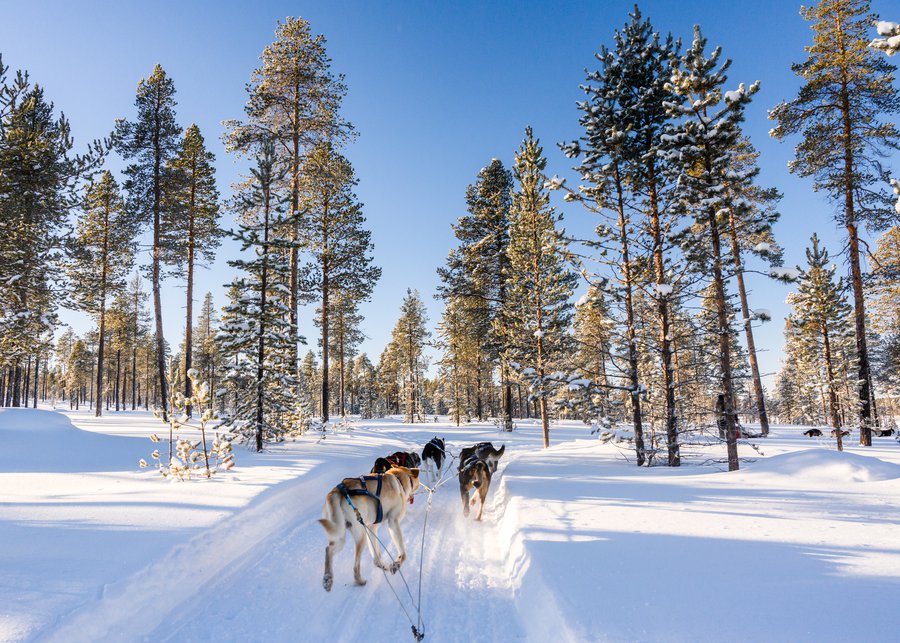 So when we booked our trip, it was my top priority. In the van on the way to our husky excursion from our hotel, two travel agents, on an exploratory trip, mentioned this was their second time doing this activity and told me 'not to worry.' Insert instant Anxiety Gal Al. I hadn't been worried, but they said that manning the sled looked daunting but was easier than it appeared. Um. Ok.

And when we pulled into the husky center, a huddle of dozens of dog houses and the sounds of dogs yipping so loudly did feel a little daunting. I'm not sure I've ever seen so many dogs in one place.

Our guide, Raine, started explaining how to use the brake, basically a metal fork of spikes that the driver of the sled steps on to hold the sled down, and I started getting truly nervous. Walker, gentleman that he is, agreed to drive first. The driver stands behind the person sitting in the sleigh, and below I am demonstrating the position of sitter. 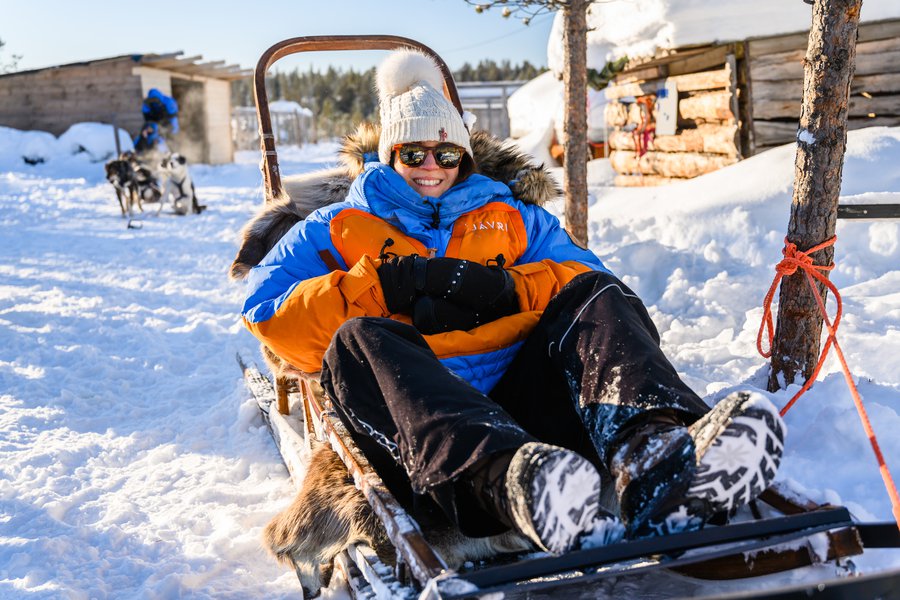 I am wearing a jacket on loan from our hotel which turned out to be a polar-level sleeping bag style. That plus hand warmers, and it wasn't too shabby in the sled. 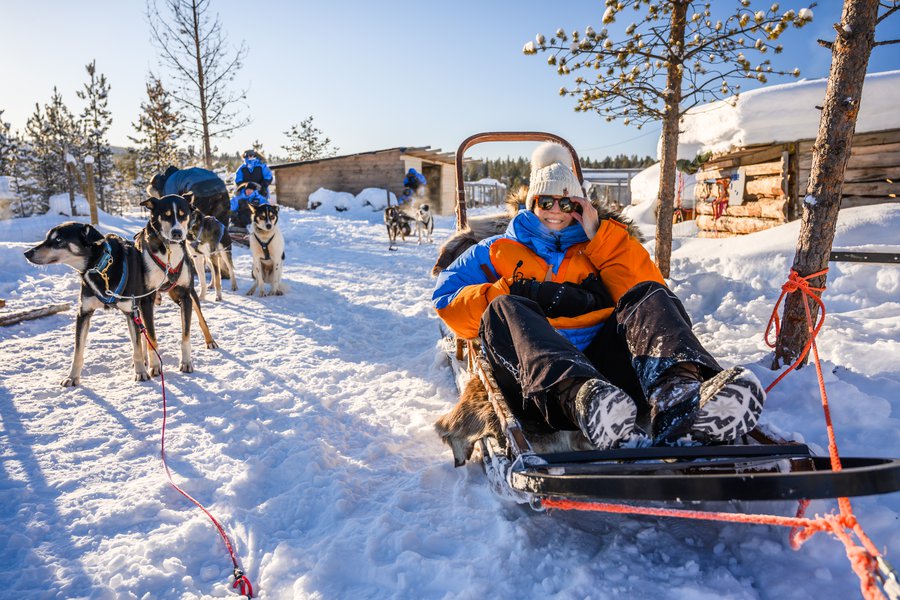 So I sat in the sleigh as the dogs yanked, yipped, barked and squealed with all their energy to move forward. And I was glad I wasn't on the brake. They pulled so hard the sled would loosen slightly and try to lunge forward. 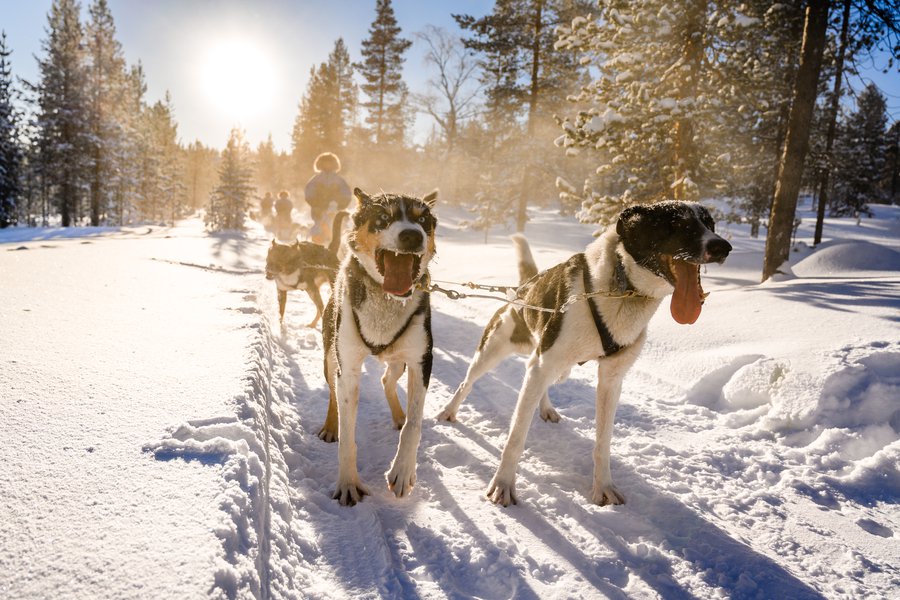 And then, when released, the noise instantly quieted to the sound of the texture of snow beneath the runners of the sleigh. Silence and speed through the forest. I think I gasped from the velocity of these five dogs, sledding us along across frozen lakes and hills. 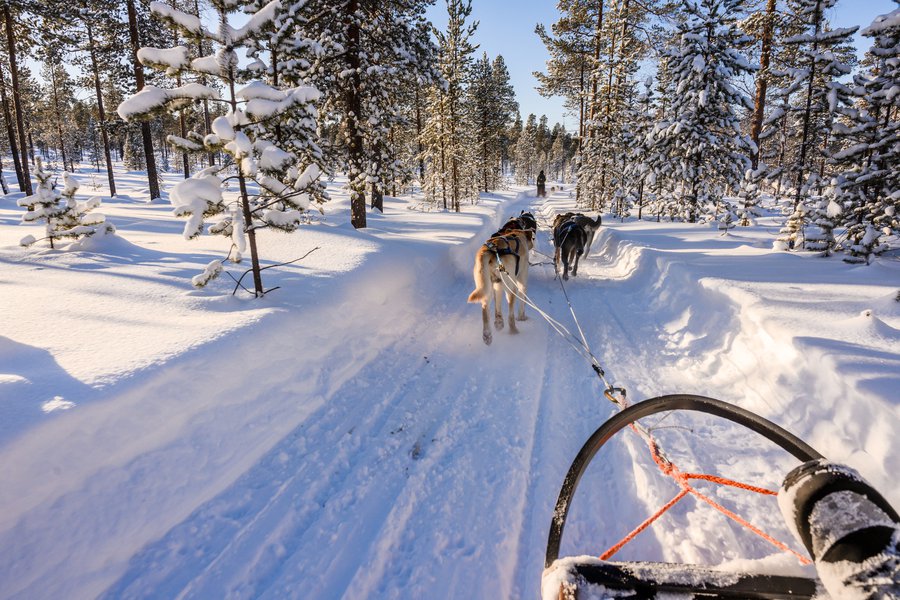 It was sublime, effortless. 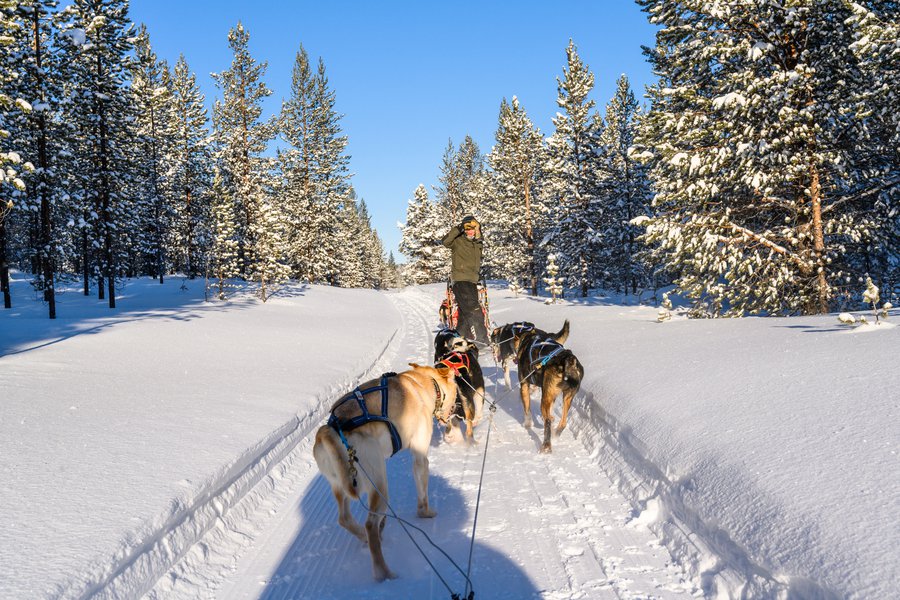 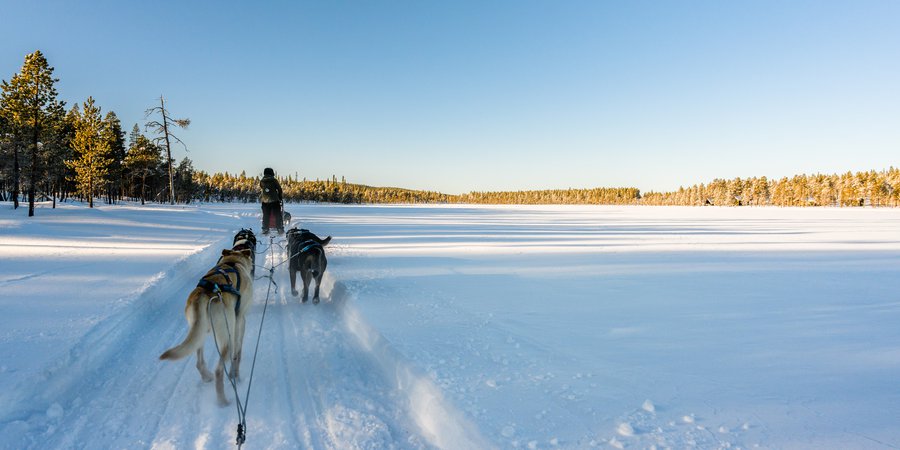 Of course, Walker was a very fine driver, and kept the sled within the path excellently. Our dogs were fast, and we kept getting ahead of other teams, so we'd slow to let them catch up. My father-in-law was also great, and perfect for our heals as he kept the dogs from approaching too closely. 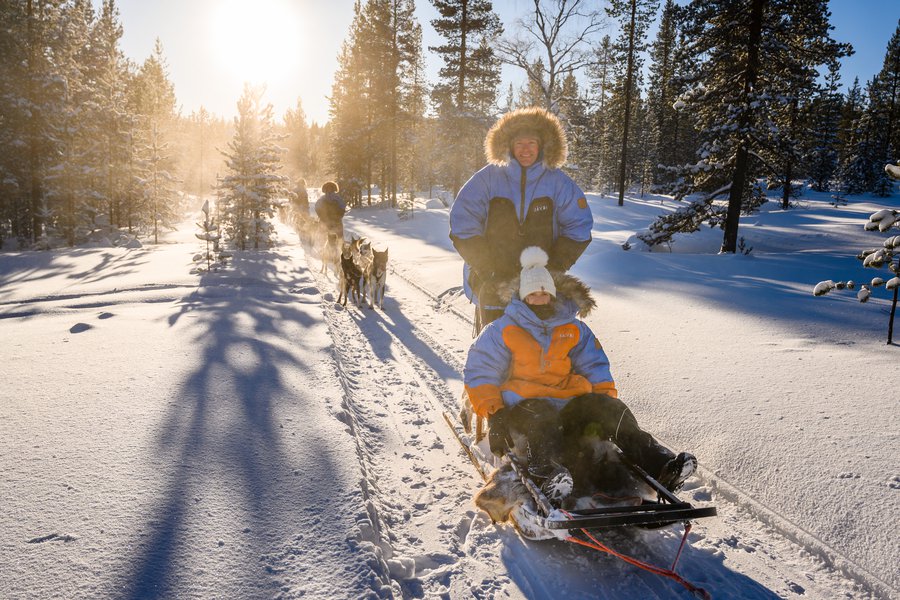 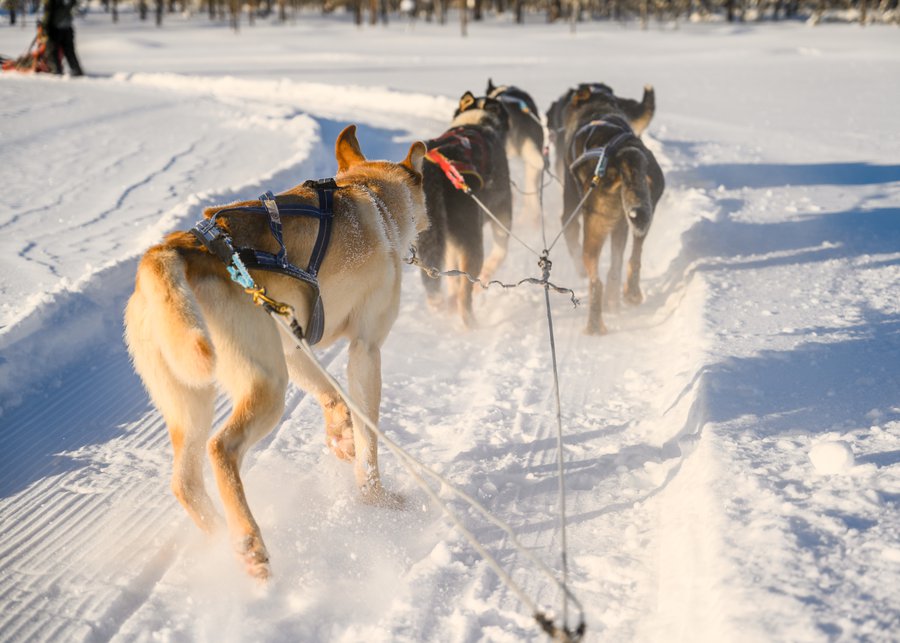 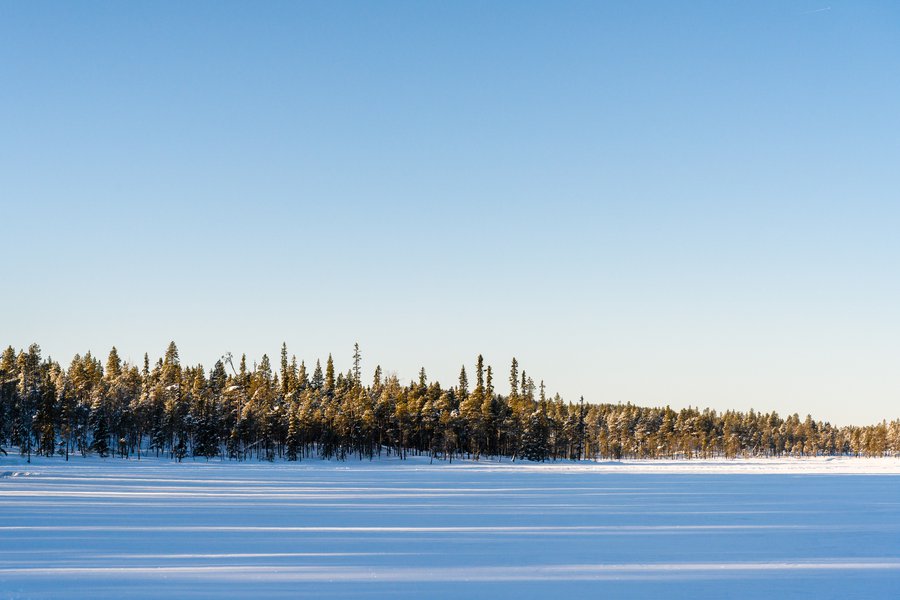 I was a bit skittish when I took my turn driving the sled, as my weight couldn't hold the brake as well, but I'm still glad I got a try before turning the reins back to the expert. I had a hard time shifting my weight enough to keep the sled in the tracks. But, my few moments of glory also gave Walker the chance to take photos. 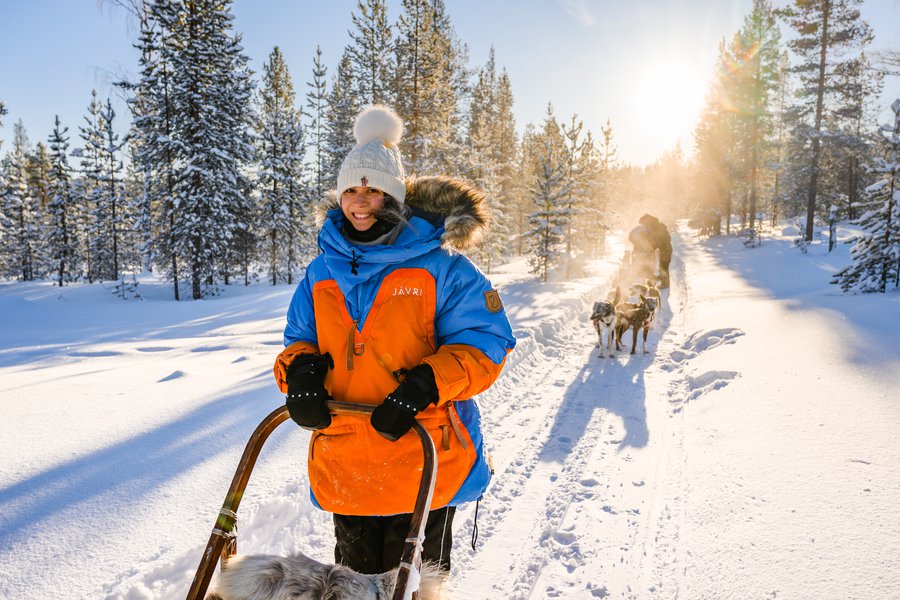 At one point, Raine pointed to a small herd of reindeer, and the dogs on the scent chasing them was surreal---the speed, the energy of the dogs and the near silence of the hunt. We didn't catch up, but the ride was fun while it lasted. 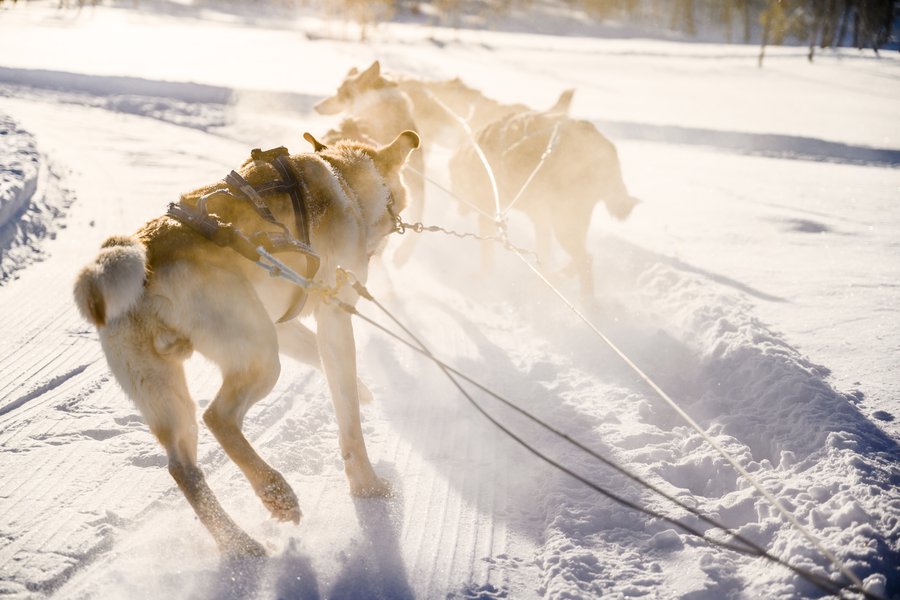 It turned out that Raine is a champion dog sledder, and just came in 2nd in the Finnish championships, so we weren't messing around. The dogs adored him and he was very attentive to those behind. 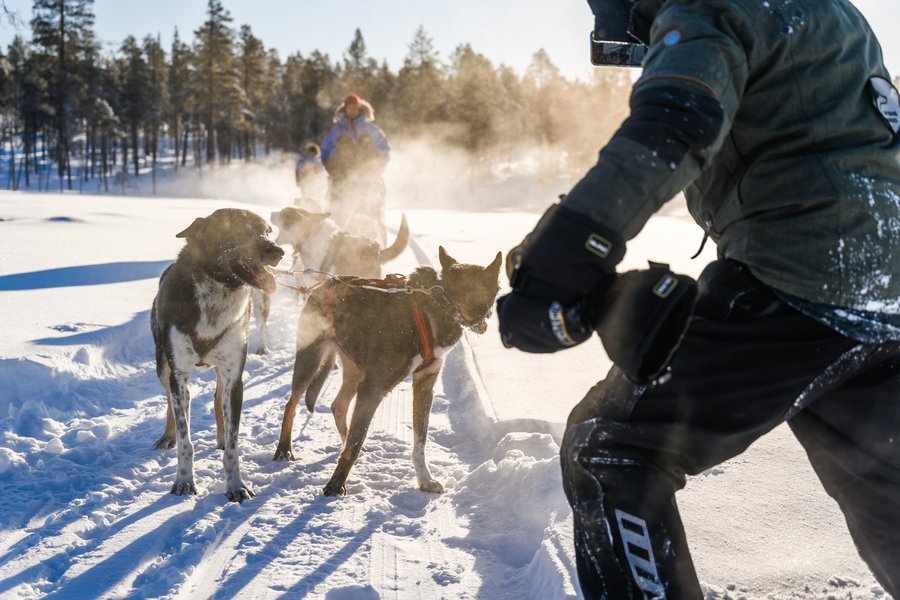 The travel agents, we found out at the trip's end, had flipped their sled once and hit a tree another time. The dogs were much, much faster this go-round they said. Thankfully, no injuries all around. We would definitely say it was exhilarating and worth every minute. 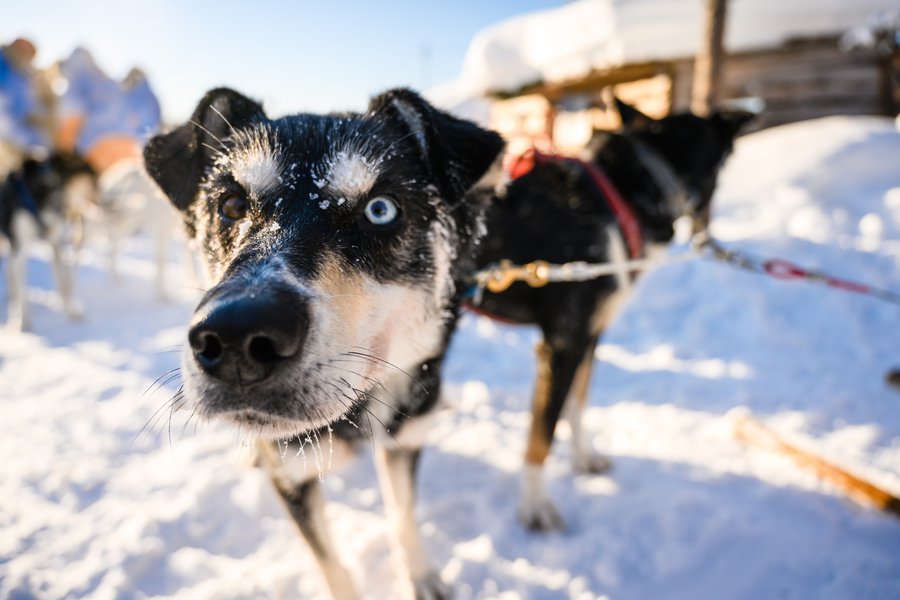 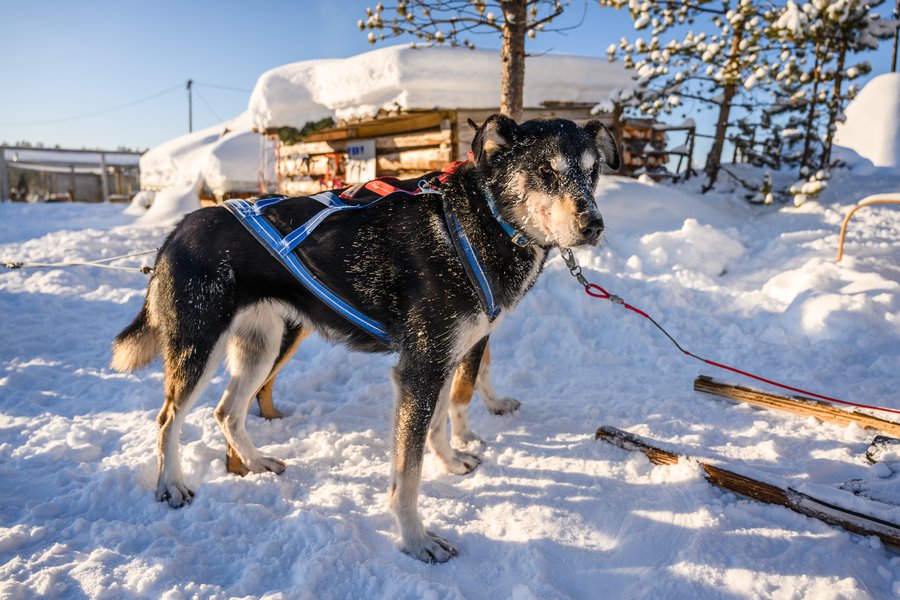 I loved the dog's enthusiasm for racing and just being alive. It was both Walker and I's favorite activity in Lapland, and ended on the sweetest note. Can you believe these mushables? 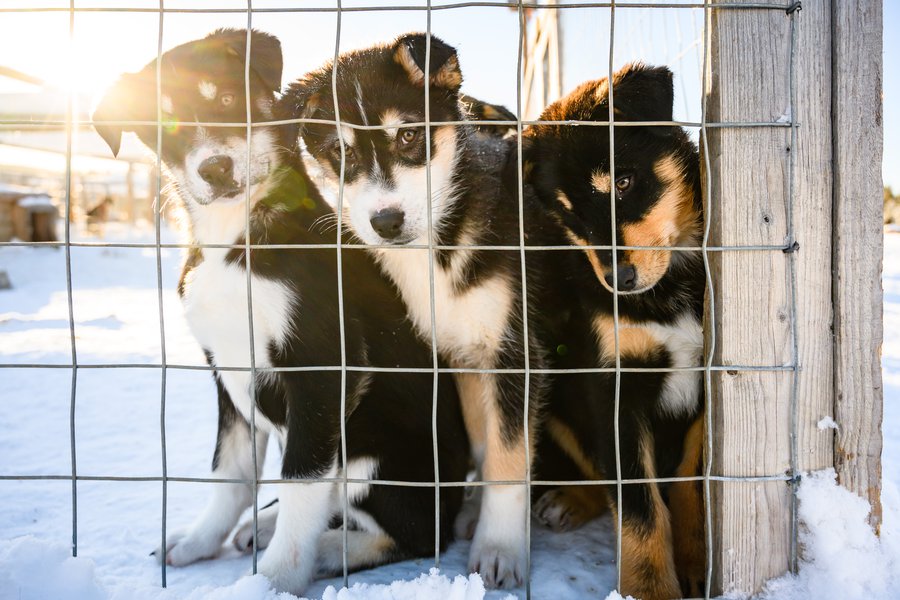 And like all good Lappish endings, we had bilberry juice around a fire, laughing and listening to Raine's mushing tales . . . 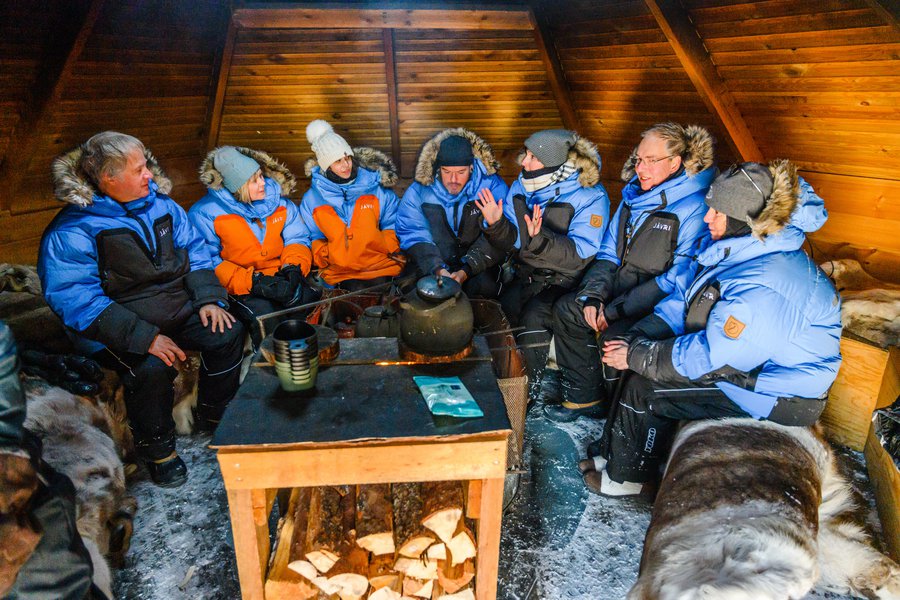 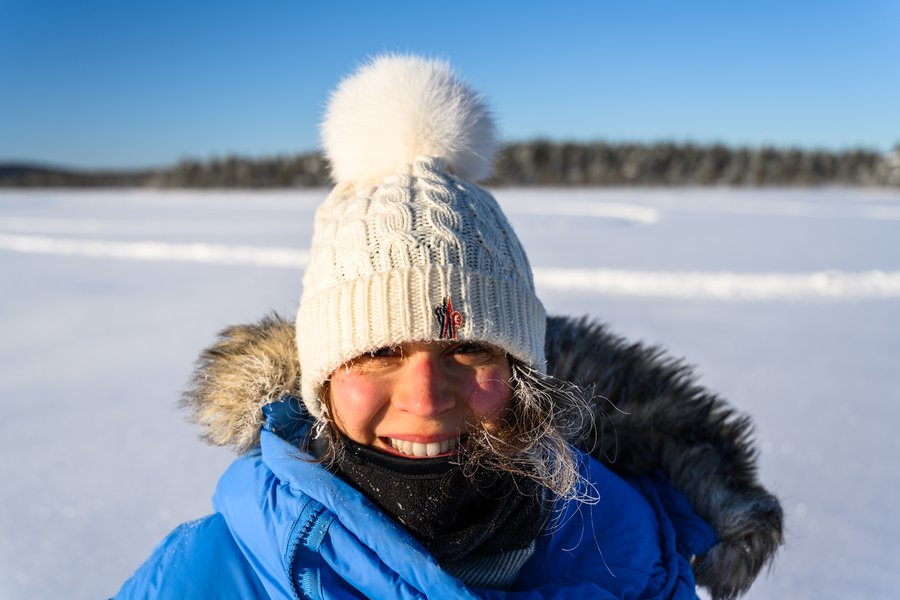 We loved it so much, we tried to get back a second time, but they were completed booked up. Until next time! 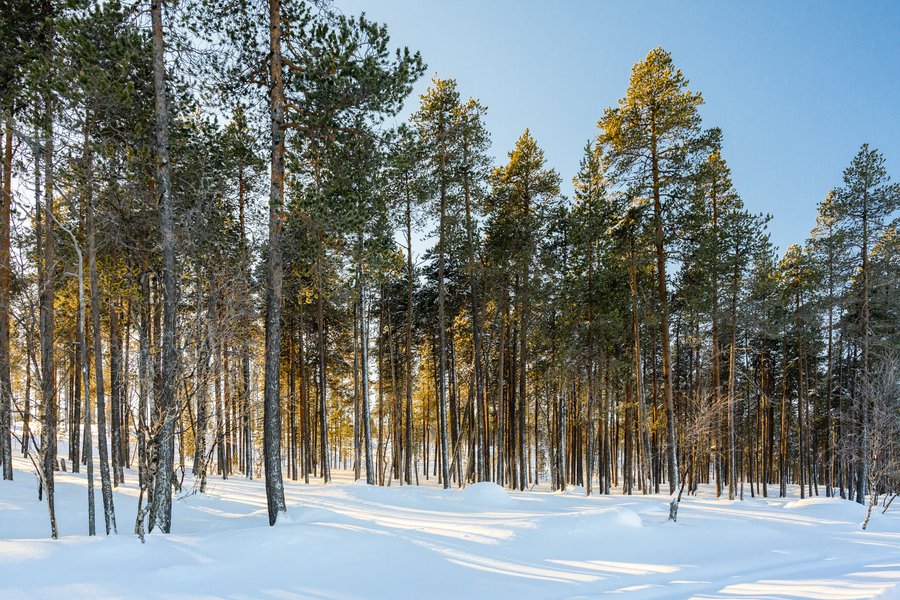 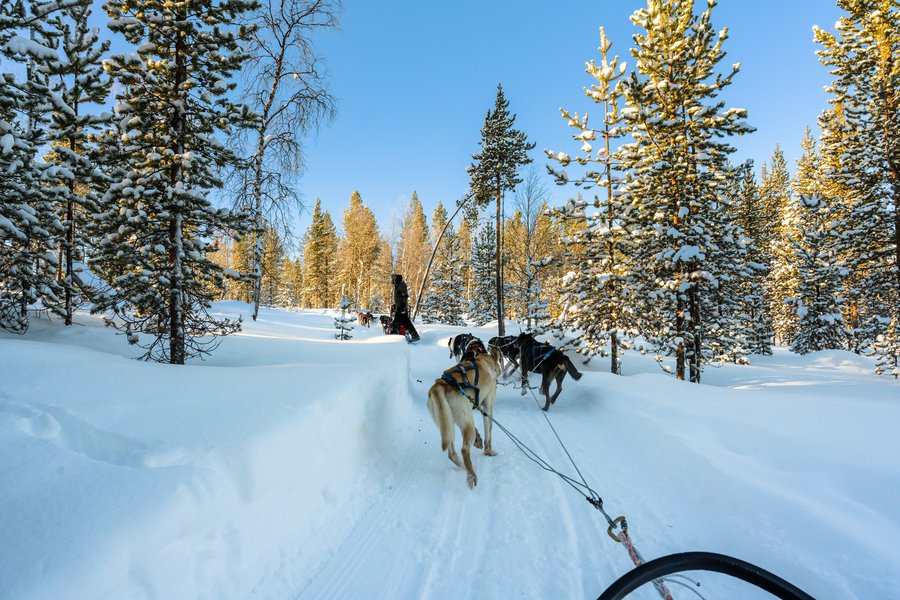