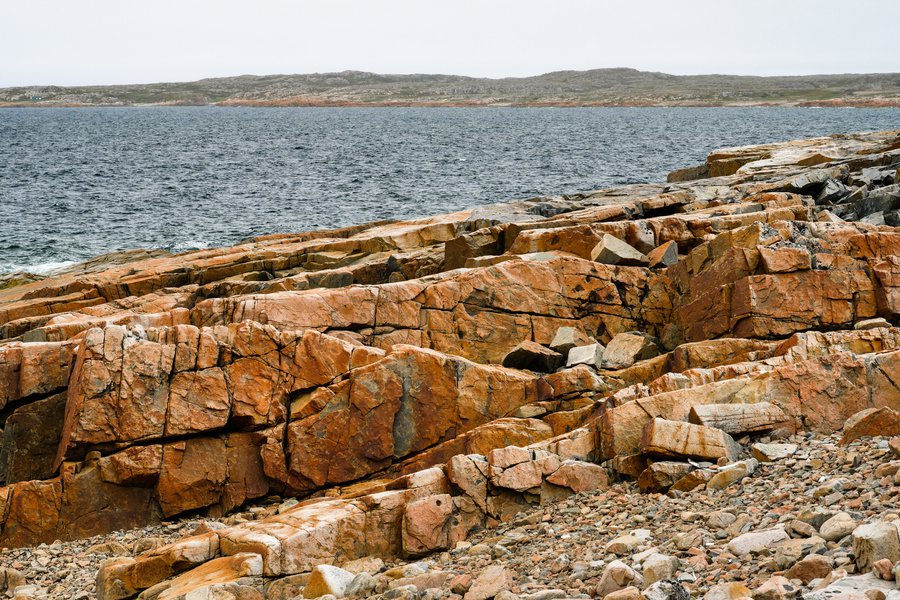 They call Fogo Island one of the four corners of the earth. And even for those of us who don't know the earth is flat, getting to Fogo Island, the most easterly island off the northern cost of Newfoundland, requires dedication. 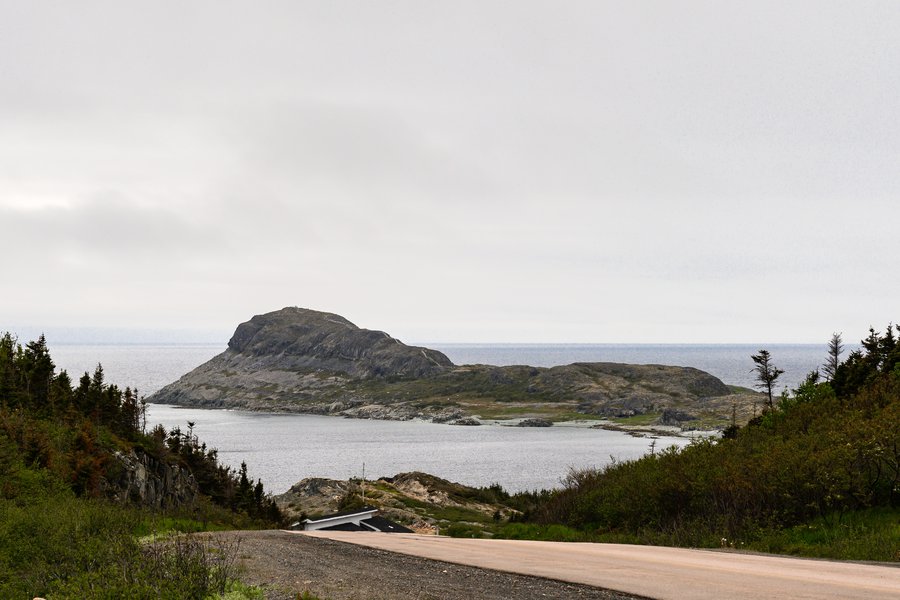 We drove from Twillingate in the morning to wait in line an hour early for the ferry to Fogo Island, departing from the port of Farewell. The ferry was large, smooth, and reminded me of the Scottish ferries of our past, with piping styrofoam cups of coffee and everyone chatting. We met the friendliest couple, Barb and Harv, from Fogo Island, who invited us to come anytime to their home, which was around the corner from the Inn (we did bike by early one morning, but didn't know if it was too early to ring, alas.) 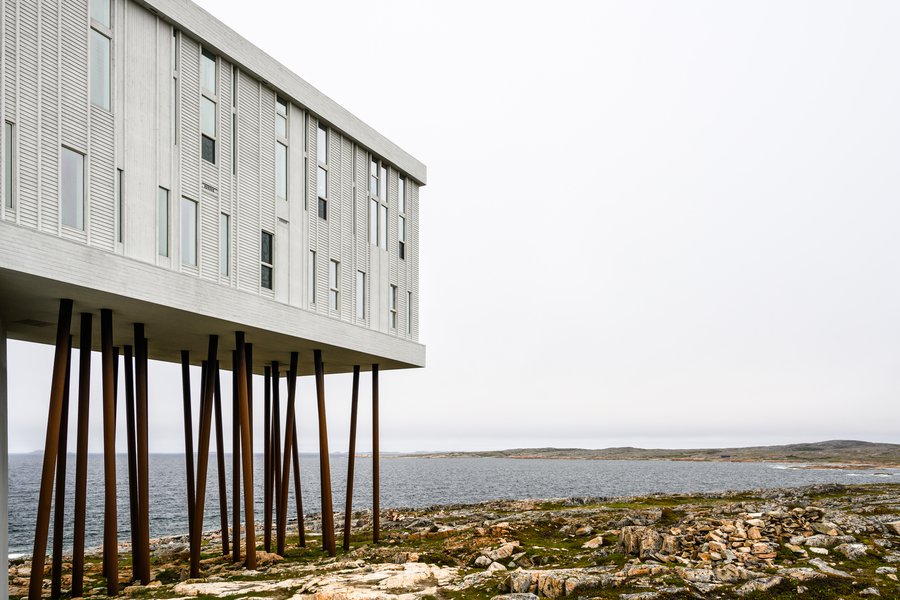 But our first stop on the island was the Inn we had dreamed of visiting for so long. Designed with a nod to the wooden houses on stilts all over the island, the hotel was truly spectacular in person. 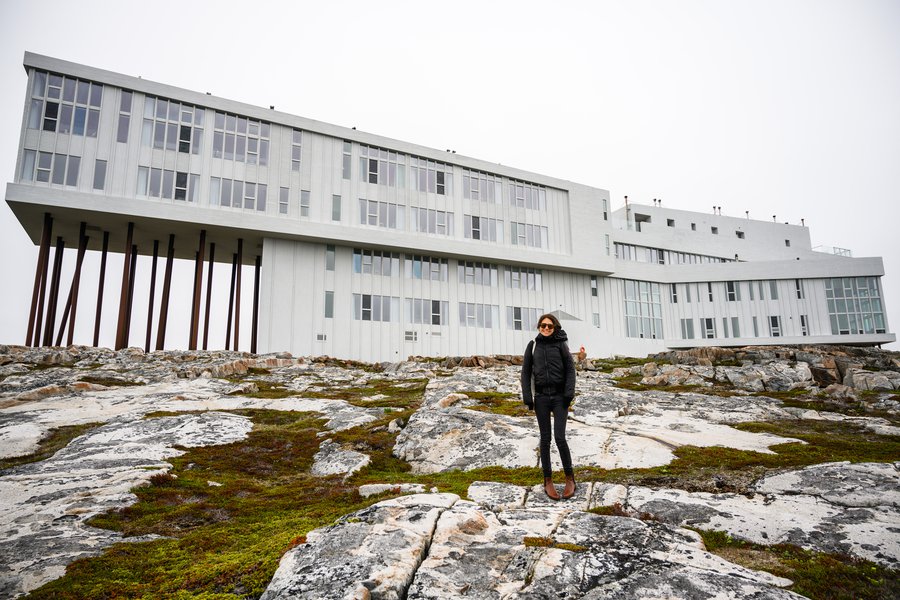 But, my friends, we don't mess around. The winds were not either. It was in the 40s, and the northerly gusts whipped around that corner of the Earth right into our hair. 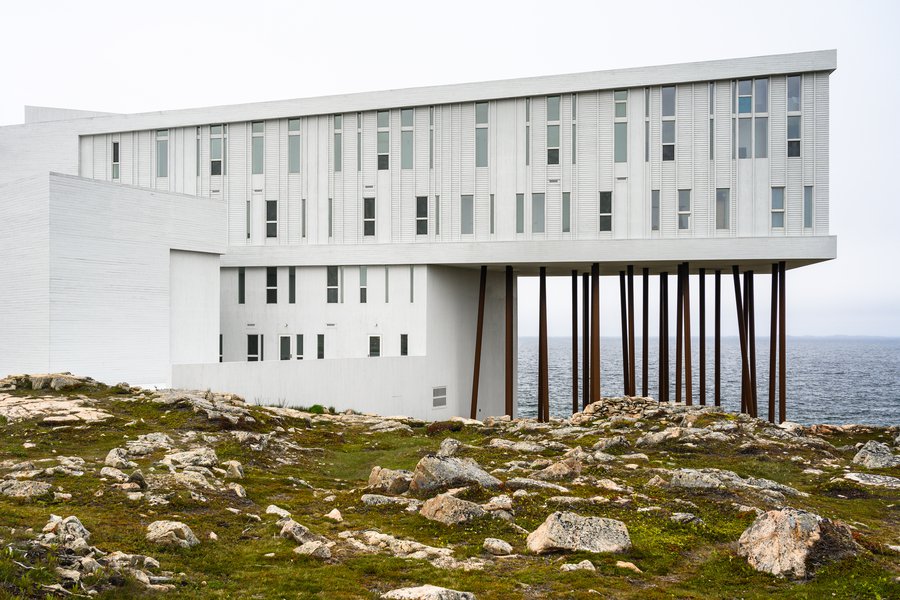 The hotel itself was the hub of our stay, and included not only a lovely sauna on the roof, library with local books, films and talks on premises, but also locally harvested and prepared food. The 2500 or so inhabitants of the island all seemed deeply invested in and supportive of the inn, which is part of a non-profit, founded by innkeeper Zita Cobb, which reinvests in the community of the island. I could write a lot about the inn, because the philosophy of building life deeply connected to place really changed us. The Fogo Island Inn was both beautiful as well as inspiring, and made us want to build a life in a small community where to know is to trust.

We had the privilege of hearing the visionary behind this philosophy of travel and life, Zita Cobb herself, speak one evening in the hotel's theater. Every detail of the economics, including the supply of all goods (such as furniture) in the hotel, was thought through by impact on the local economy.

Part of the experience of the stay, and perhaps the most brilliant one, is an island orientation with a community host. We were paired with Fergus, a retired fishing policeman, who made us laugh, and gave us a 4+ hour drive around the island, pointing out things to do, with special note to hikes. We took most of his suggestions we could squeeze in over the next few days. More incredibly, everyone on the island knew him (and each other), so we were instantly and completely welcomed. 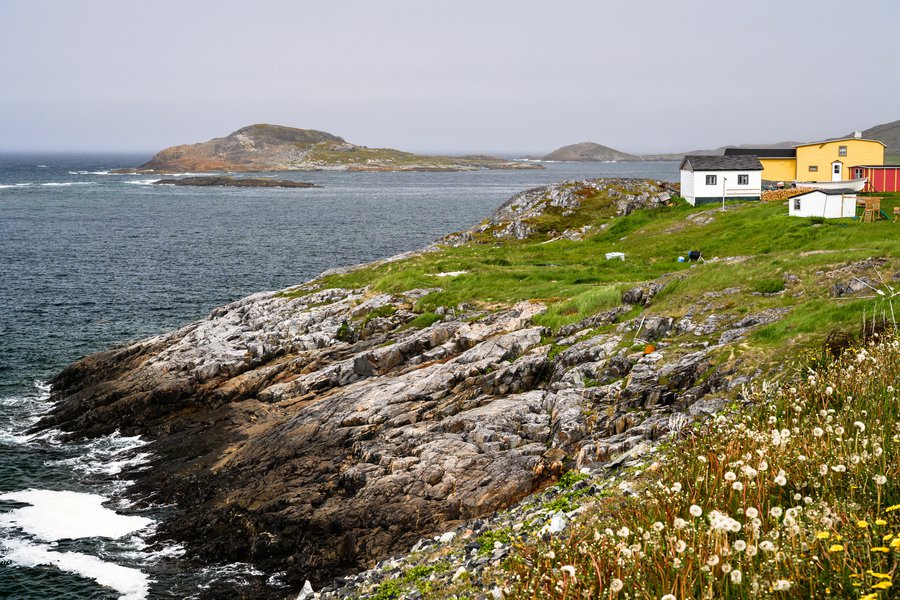 That little lump in the background on the right is Brimstone Head, which many people told us to hike. It's taller and longer than it looks (about a 45 minute hike) and is the official Corner of the Earth, according to Flat Earthers (yes, they are serious). 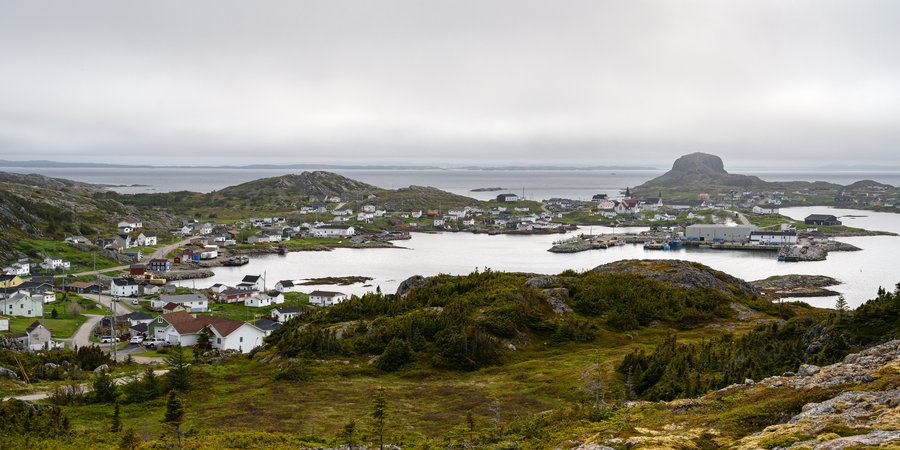 Fergus told tales of the sea, salty and hilarious, and brought us to the island's fishery to see the shrimping boats. The Shorefast Foundation, which the Inn is connected to, is also invested in the fish economy of the island. And by fish, they mean cod. 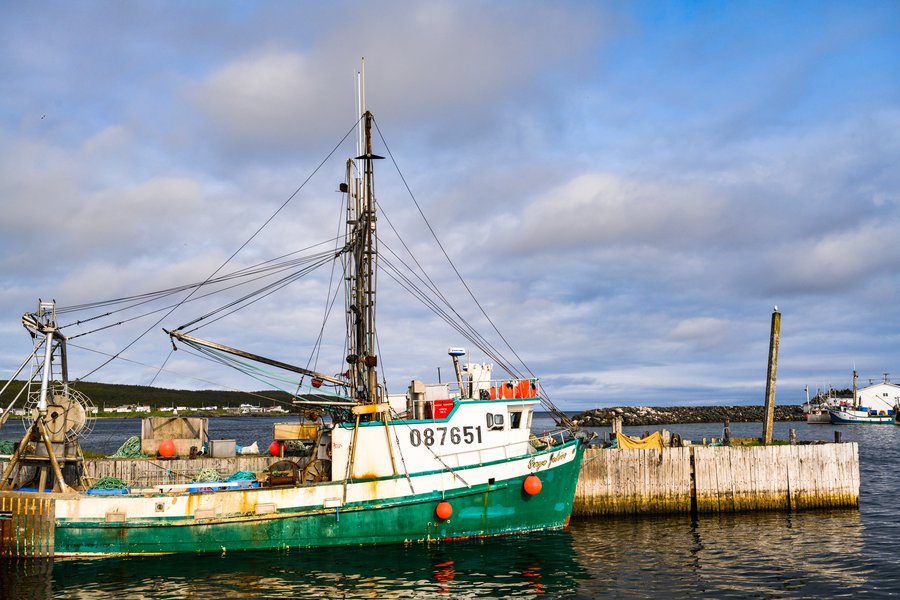 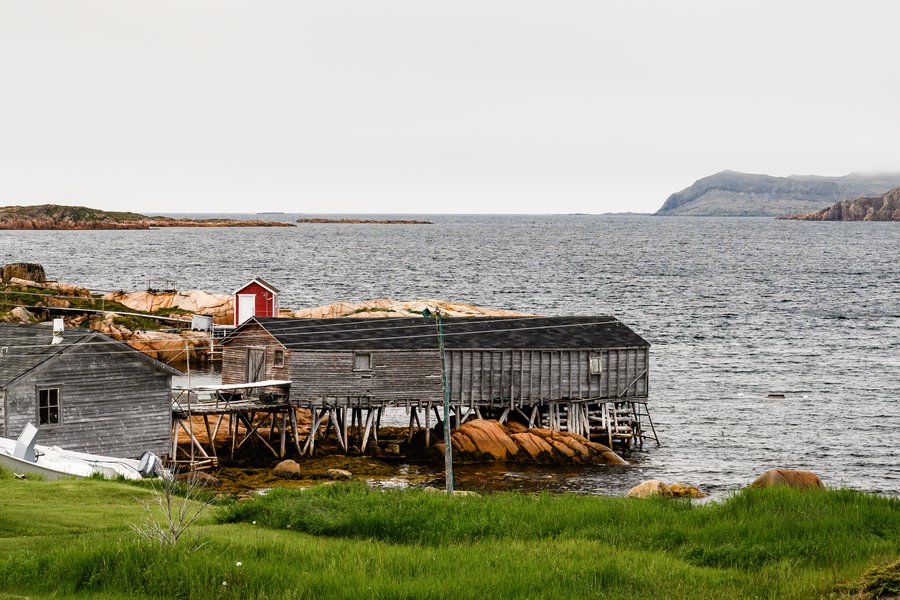 We nearly circumnavigated the island with Fergus, meeting friends everywhere including the artist Bruce Pashak, whose artwork, created in an old schoolhouse, left us stunned. 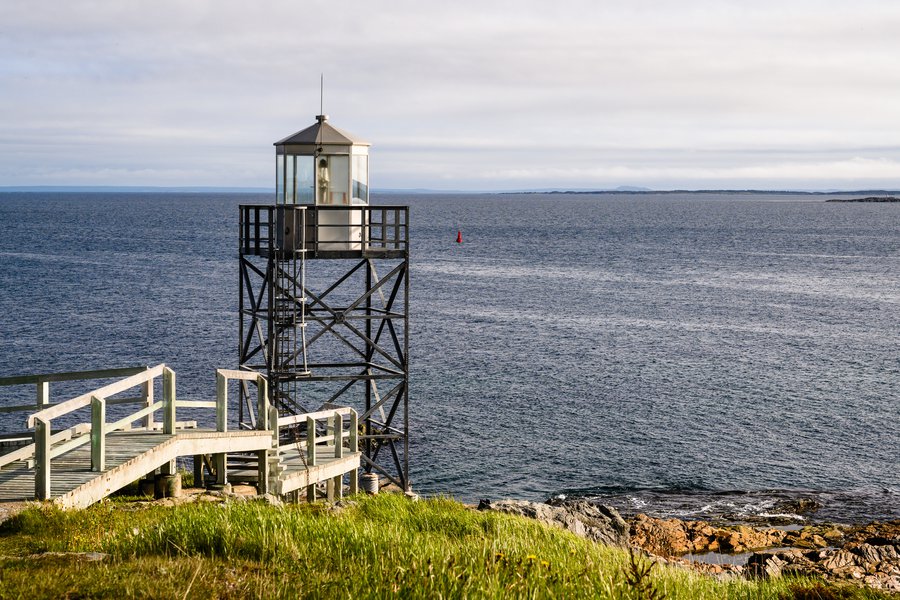 And overall, what a brilliant idea of the hotel, to have a true guide introduce guests to a place: utter hospitality. 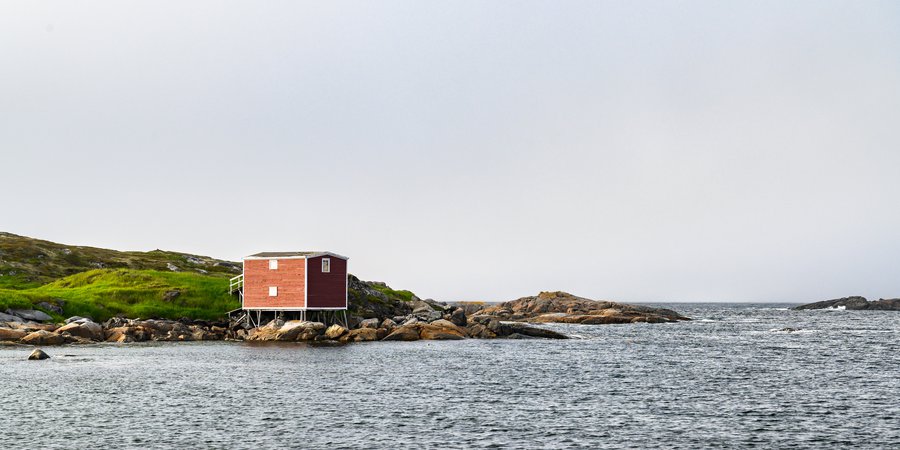 That rich sense of place the hotel introduced us to inspired me to read The Abundant Community, a book about the vital importance of being connected to people, in a place. 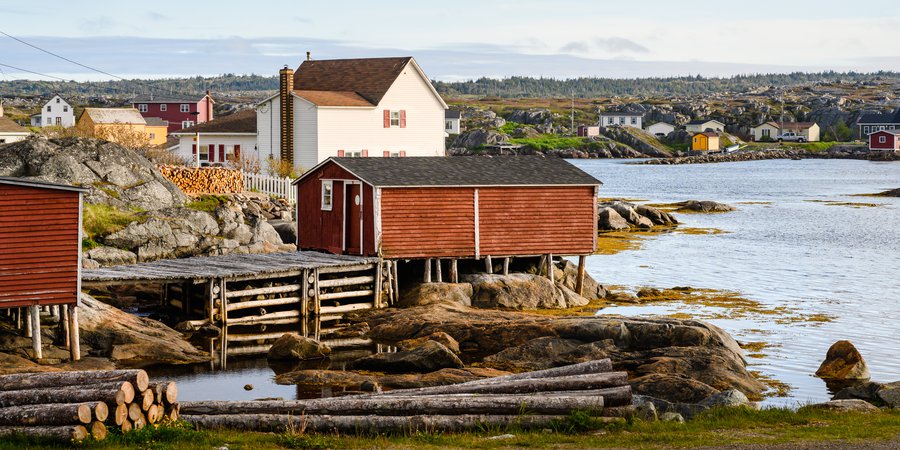 Later that evening, as I sat watching the sea turn its covers into night, Walker went to the nearby towns of Joe Batt's Arm and Tilting to shoot the buildings, many of which were for drying cod, still maintained and kept by the families, keepers of the island. 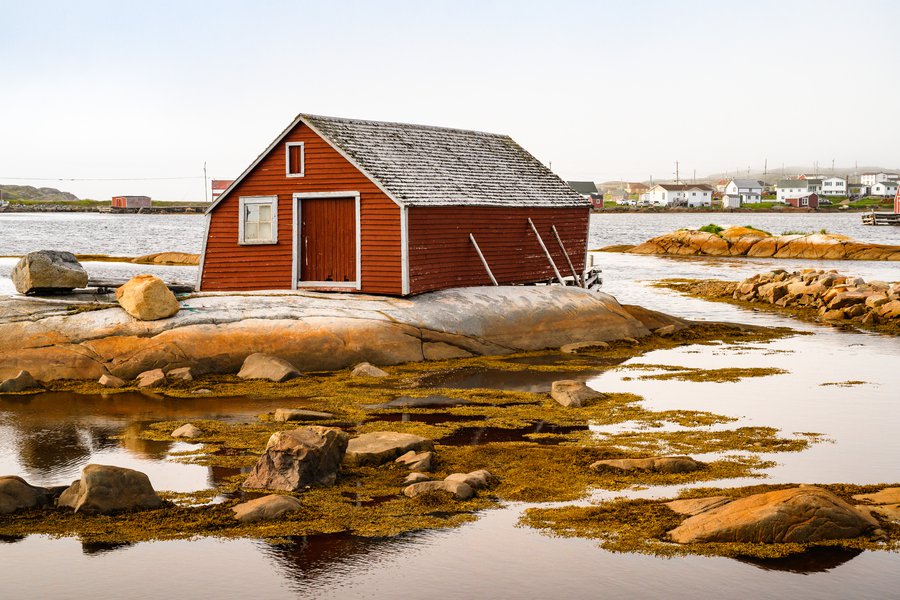 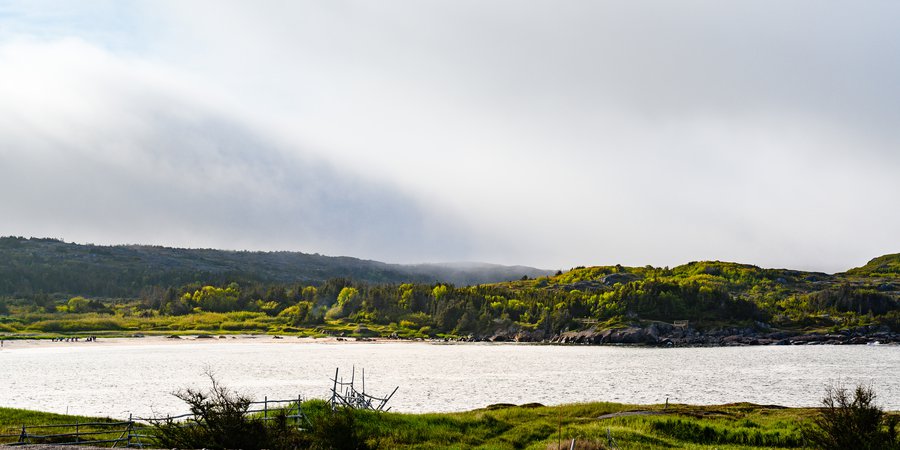 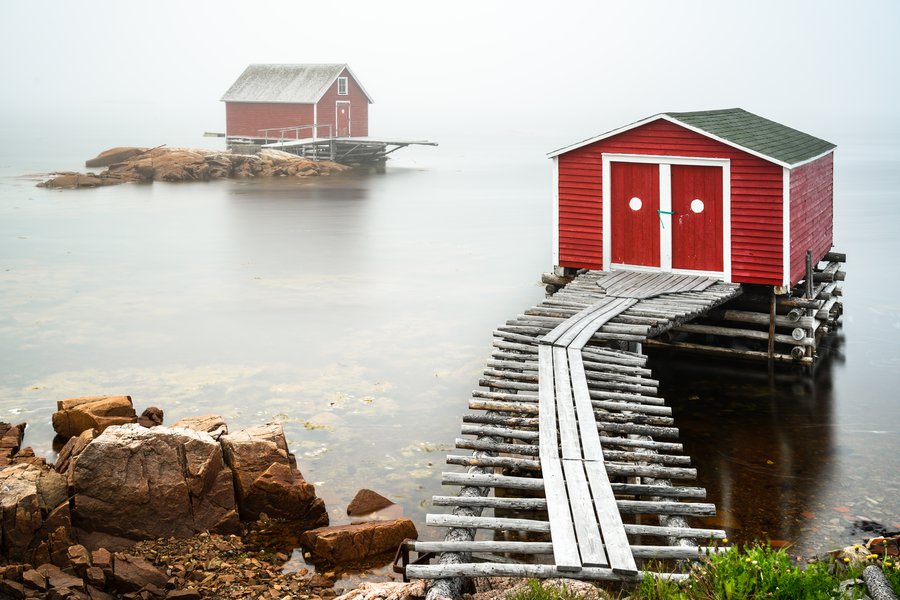 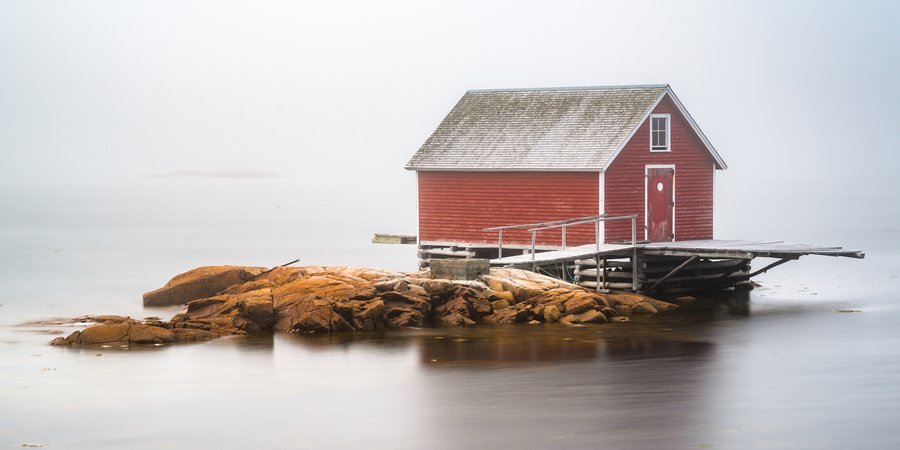 I know some of these are similar, but so many of the dwellings were this red color, 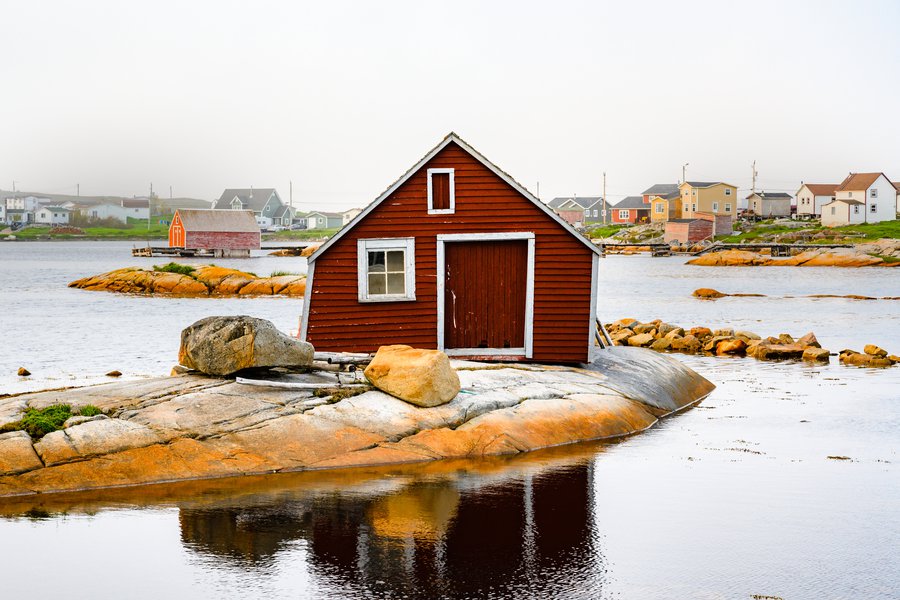 and they all had different personalities from every angle. 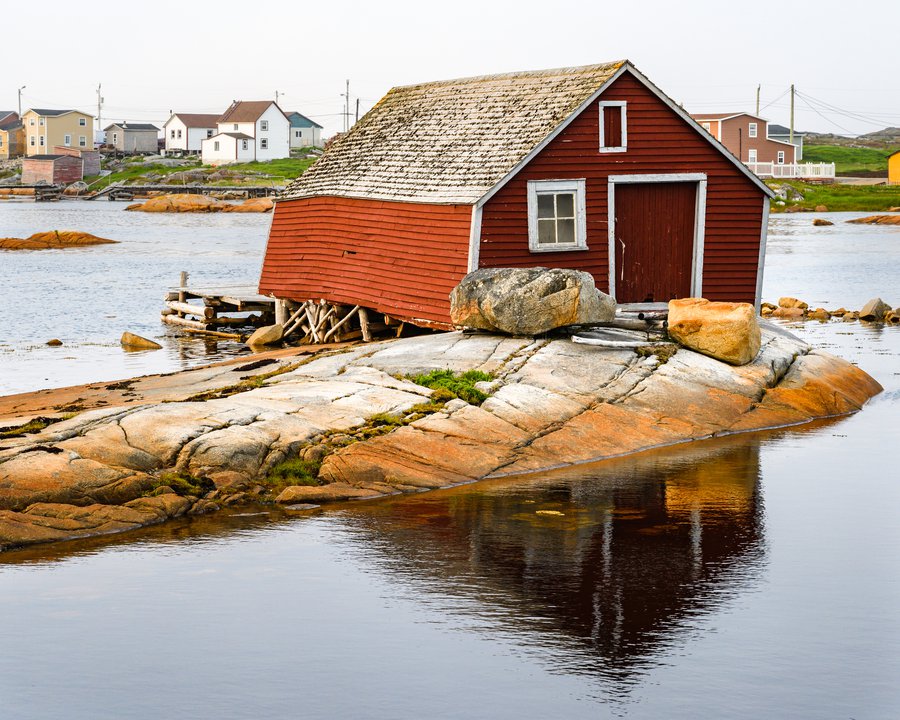 That gorgeous, rich, smooth northern light in the evening. 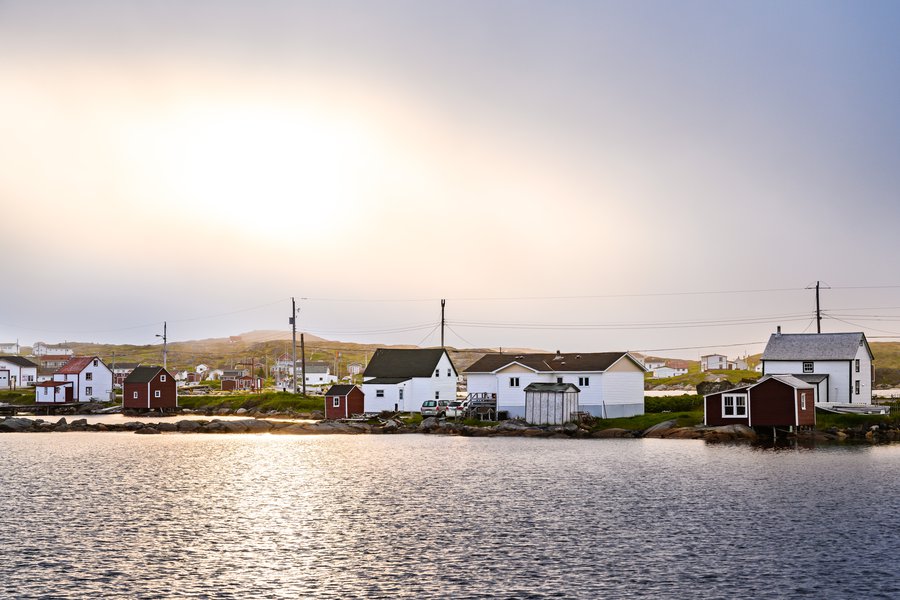 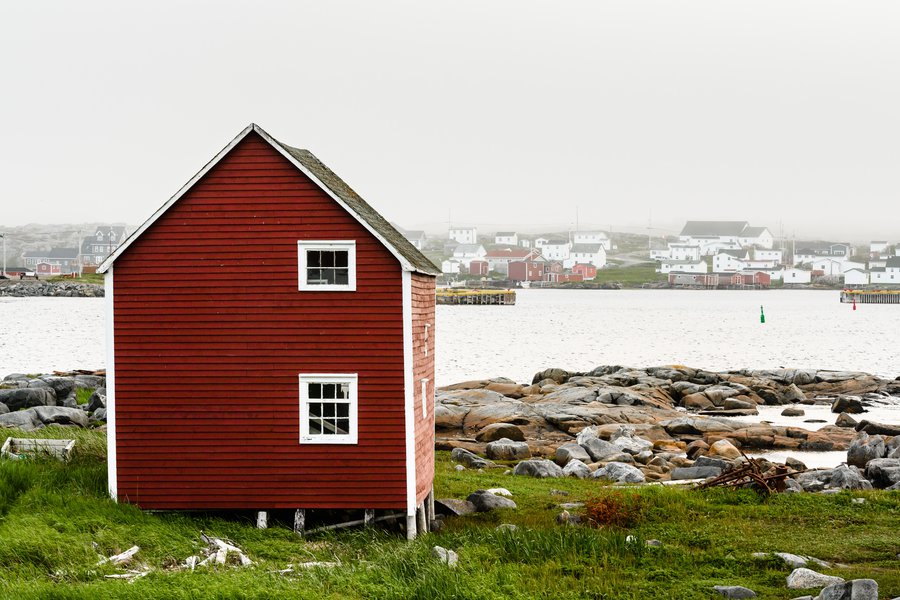 As soon as Walker got back, around 9pm at night, I hurried him to the wide windows of the room for the thinnest, most concentrated sunset, stretching across the horizon. 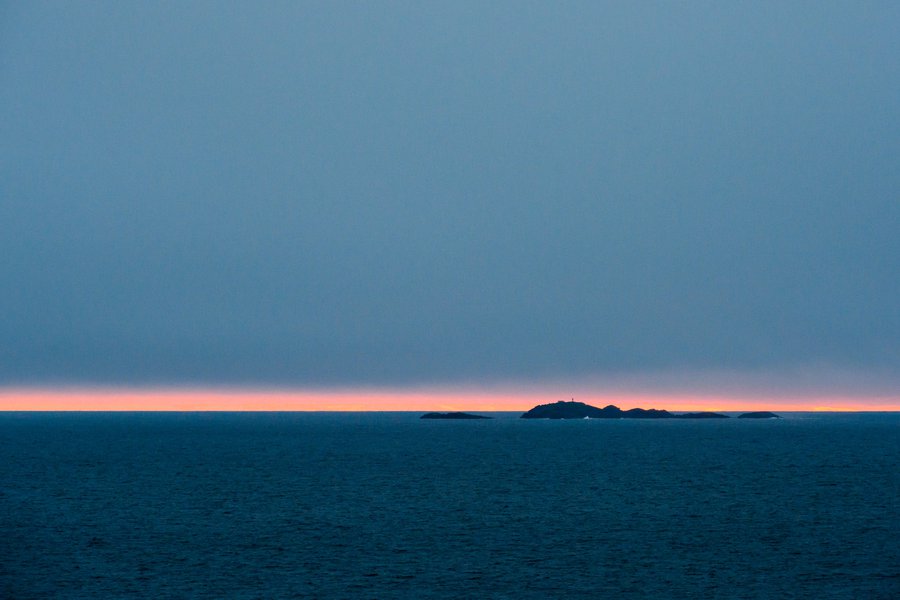 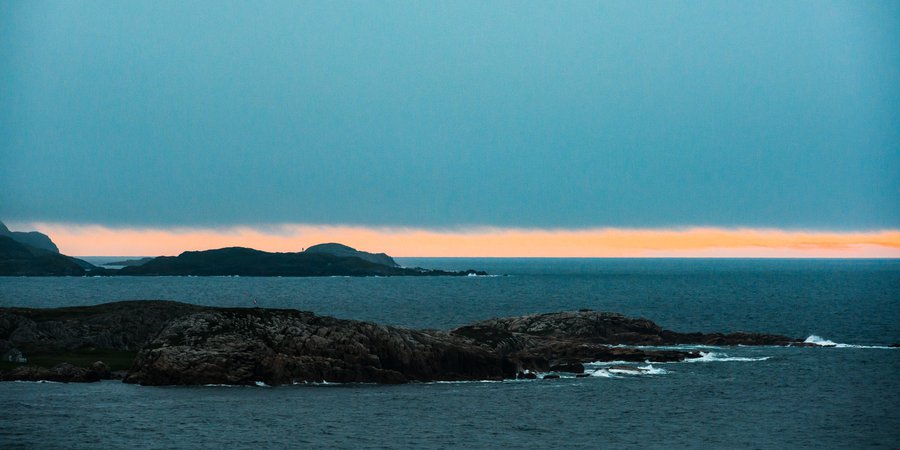 More on our days exploring the island soon. But that evening, as the light left and the waves crashed below the inn, we listened to the accordion of Aaron Cobb, whole ballads and melodies truly filled us with joy.