We had two qualifications for a quick 5 day summer break from NYC swamp in early July: cool and close. And you better believe I keep a running list of places I'd like to visit that gets longer by the week, so it took me about 10 minutes to think of Fogo Island, a place I'd read about in Newfoundland, but of which I knew nothing. I didn't know where Newfoundland was and I certainly didn't know the islands off the coast. Some Google mapping later, I had discovered the jut of land that you'd find if you drew a line north and followed the coast east from Maine. 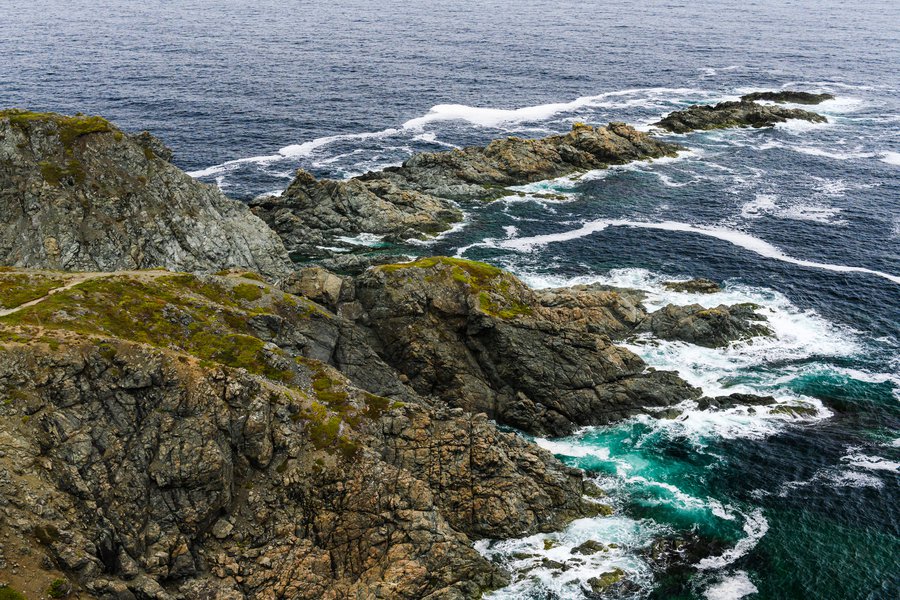 To diversify the trip's destinations, I chose another island directly to the west of Fogo for our first destination. Air Canada swapped our flight times a bit, so this was both a built-in buffer as well as a chance to see more of the province. Two flights from New York later (in Halifax and then bitty Gander), and a 90 minute drive along chains of islands that dribbled into each other amidst crashing waves, we arrived on the island of Twillingate. 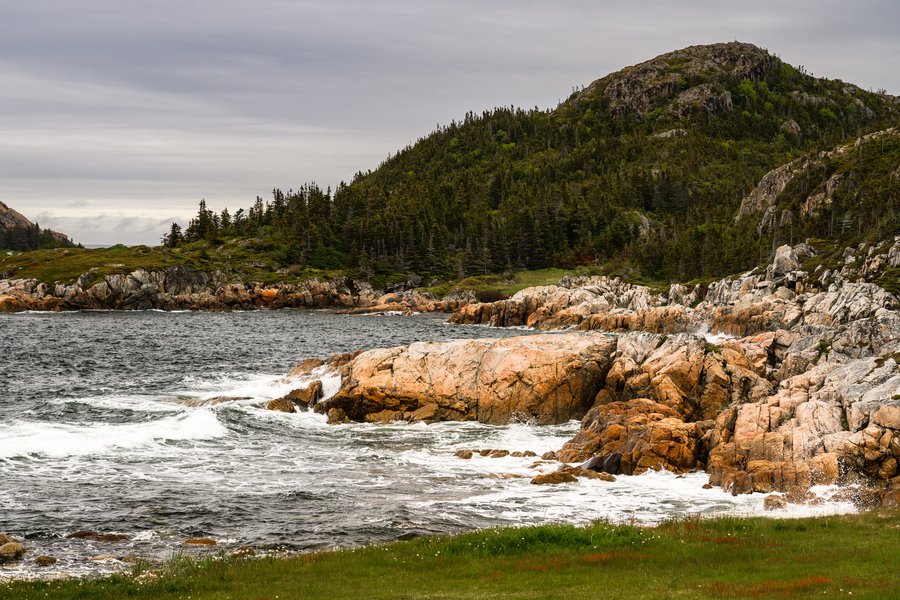 As our cabin would be on the northwest corner, I wanted to get a quick walk in on the southeast corner on the way north. We pulled into what looked like an unmarked lot for the Little Lower Head trail, and were twisting around looking for signs, when a cat, and then older gentleman in a blue painting suit came out of his root cellar to say hello and tell us it was perfectly fine to park there. He motioned for us to come around the back of his house, which only gave us a little pause, before we entered into his house, and his art studio--complete with paintings and many model boats. He told us stories of his commercial captaining days, and just sat, enjoying our company, inexplicably. 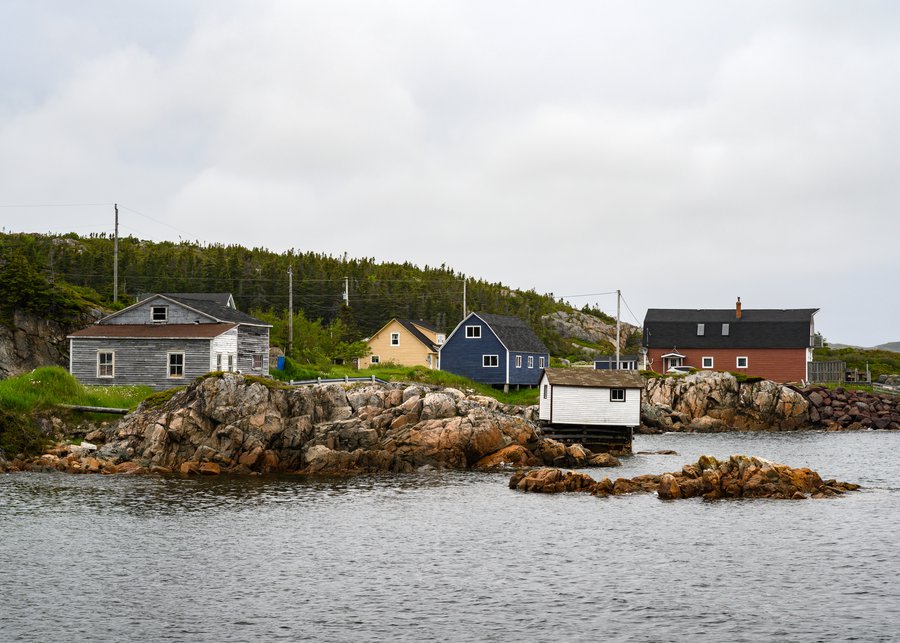 And thence, the introduction to the island by the kind Otto Young will forever remind us of the spirit of these welcoming and kind islanders. We walked down the little trail for about 400m, taking in gulps of the salty water and pines that remind me so much of Maine, before a drizzle came down. 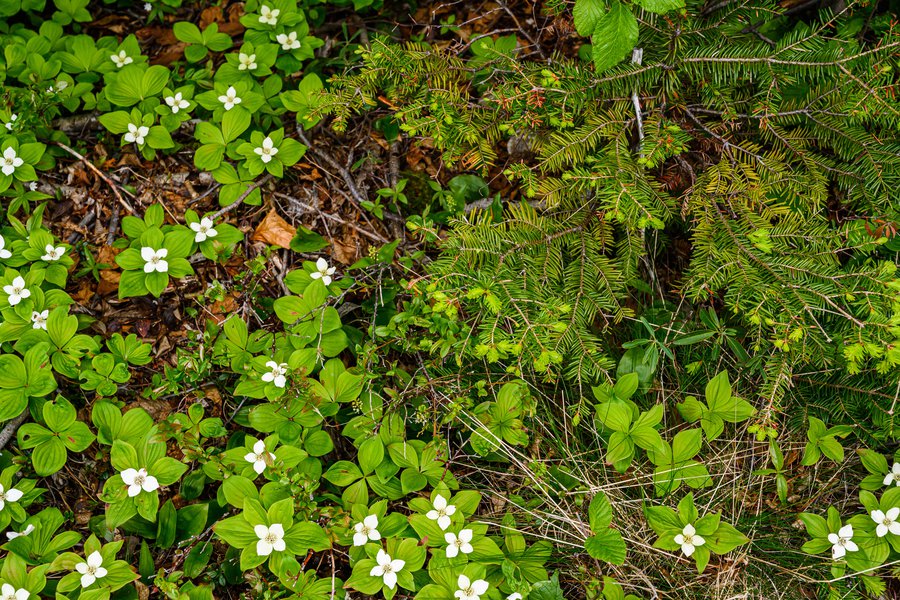 The perfect white stars of flowers, bunchberry, grew everywhere, and the precision and clarity of their shape held, even in the coast winds and waves. 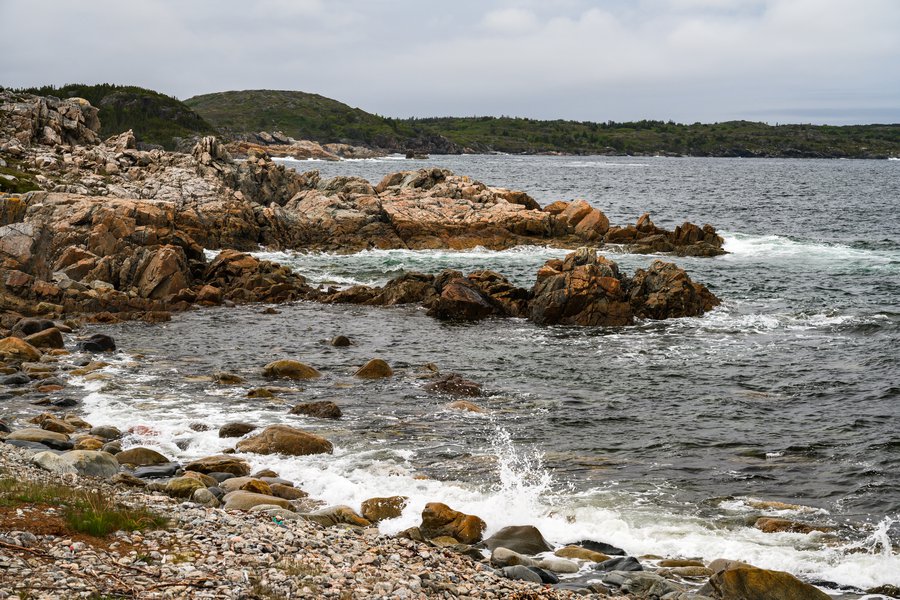 Since we weren't wearing hiking clothes and it was getting damper, we headed back to the car for the 10 minute drive into town. I had two restaurants earmarked to try, and we quickly decided on Pier 39, and were so very glad we did. The food was delicious, especially the  mussels and fresh (gluten free!) lobster roll they made, sweet and succulent.  When I didn't finish mine and asked for a takeaway box, the kind owner made Walker a whole new entree so we'd both have a lunch the next day. We literally couldn't believe it. 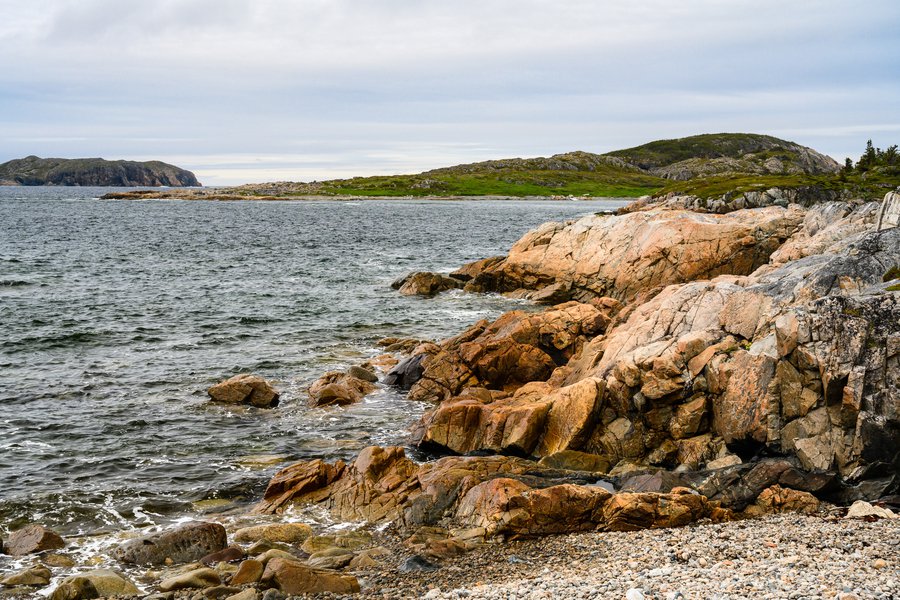 We drove from the town of Twillingate about 10 more minutes to the northern fork of the island to our wee cabin, the Artists Cabin, home for the next 2 days. 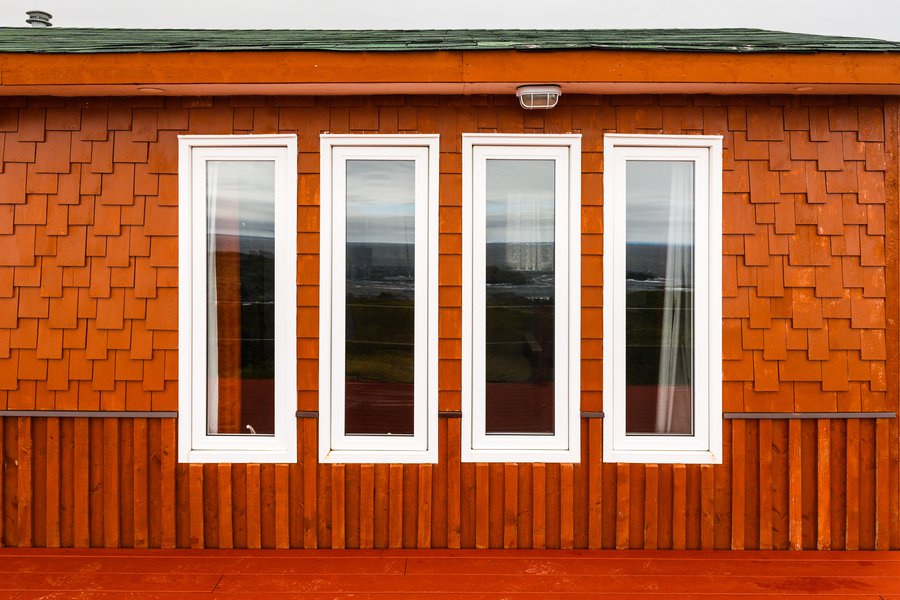 The fog was dense and the air cold by this point, well into the 40s, and we quickly fired up the gas 'wood' stove to watch the fog around the coastal islands, and listen to the fog horns into the night. Here was the view with fog, 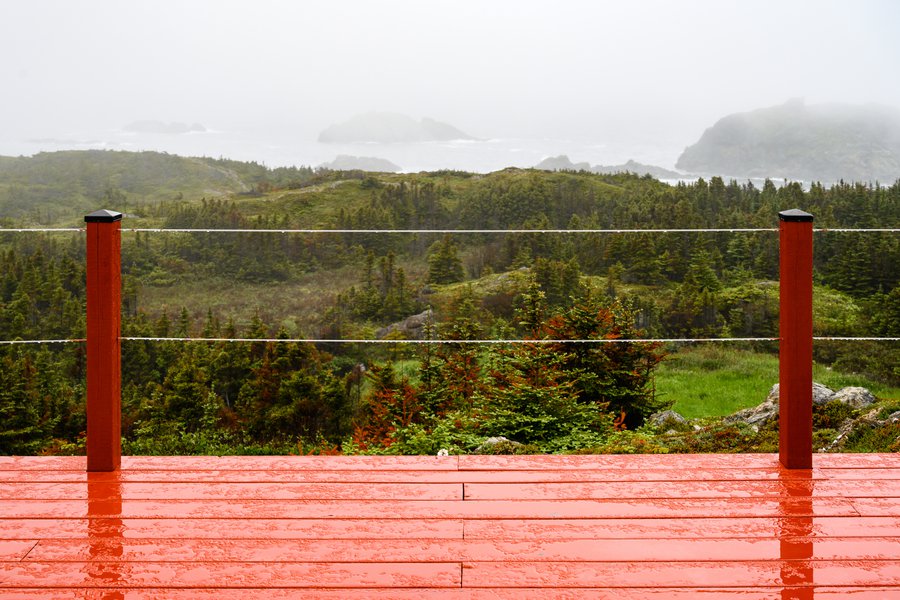 and next morning, when it had lifted. The stunning sea views would have been wonderful in warmer weather, but the 40s kept us inside the evenings we were there, for the most part. 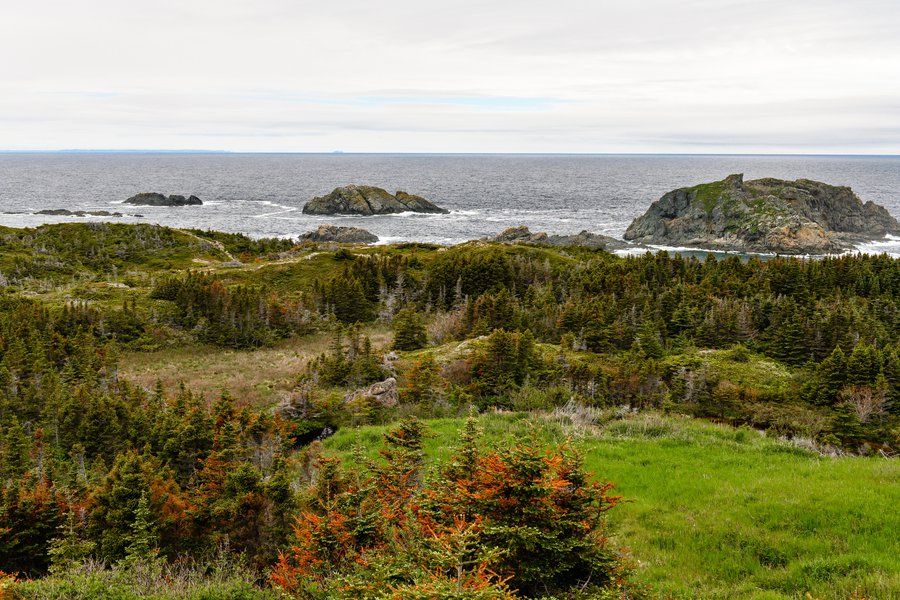 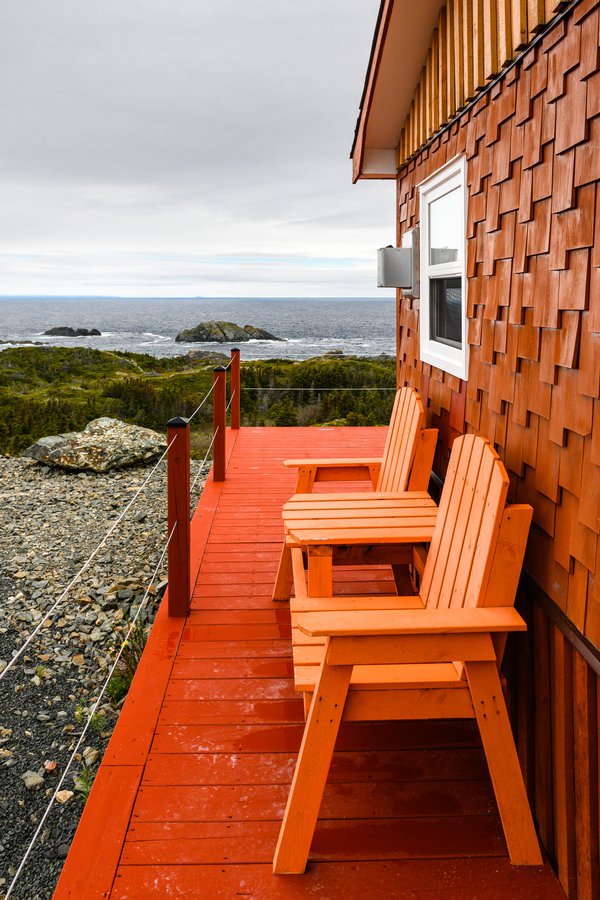 We fell asleep to rain and woke up to fog, so took our time getting to breakfast at the very nearby Crow's Nest Cafe, where we we warmly welcomed and ate the most scrumptious partridgeberry yogurt parfaits and some scones (Walker). And we got to play outside with their friendly neighborhood dog. Here is the view from near the cafe. 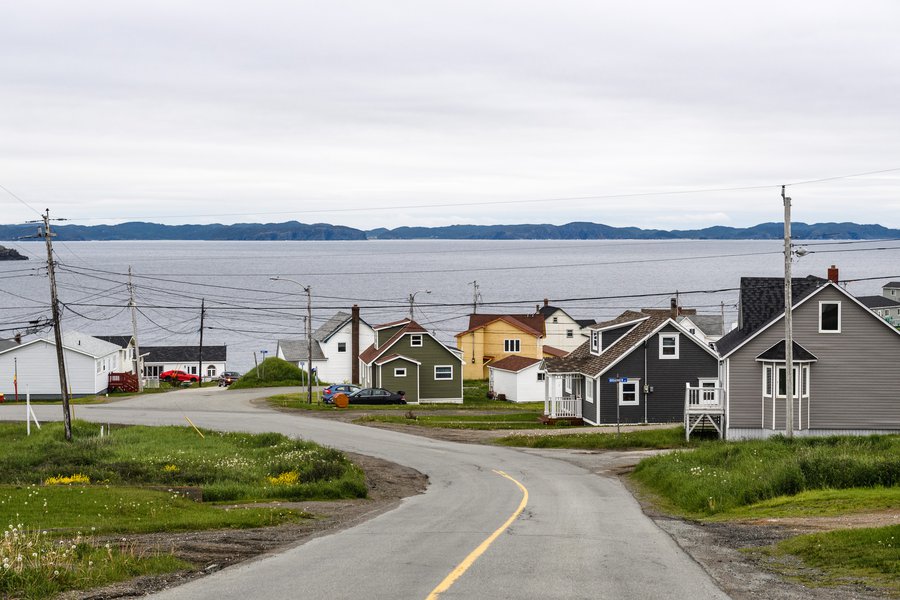 Twillingate is a rough heart shape, and we stayed on the top of the left lobe, so we drove to the north side of the right lobe, passing quaint villages with the iconic fish sheds on stilts, in some cases, over 100 years old, we were told. 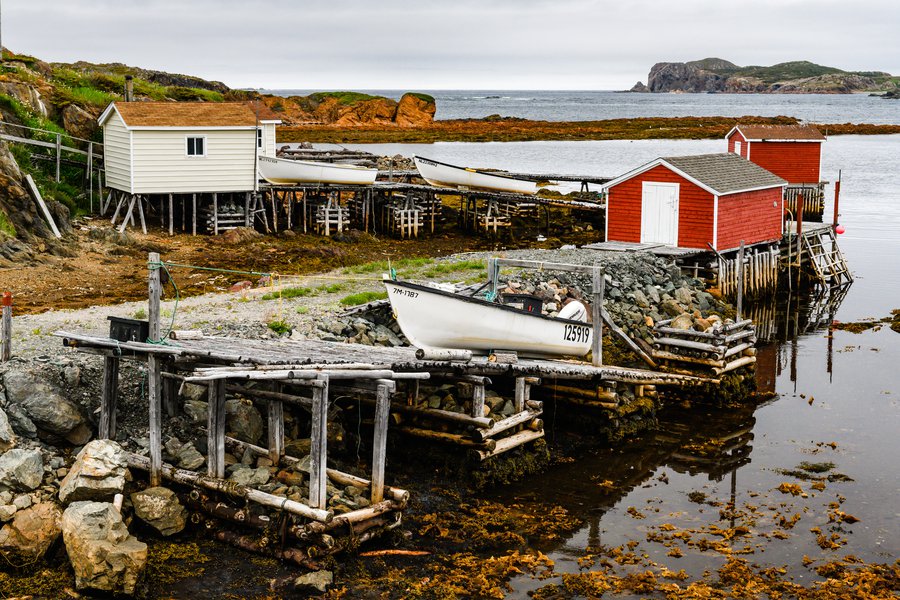 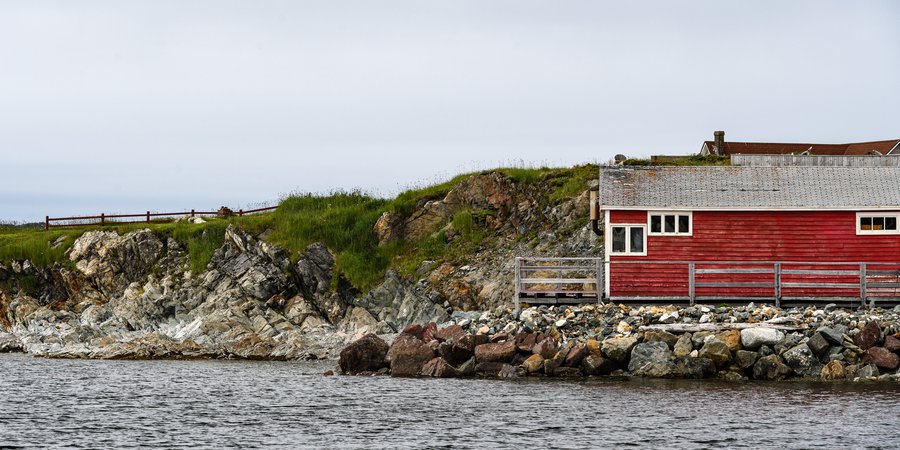 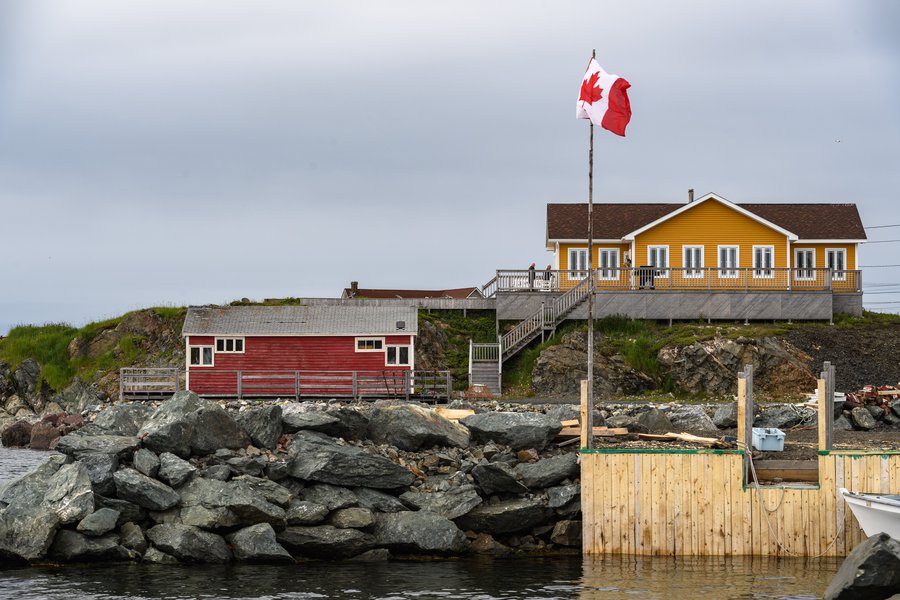 We parked at French Head Beach, and started what would be a most-of-the-day hike (which I'll share more of in the next post) by mounting the mini hill right on the beach. 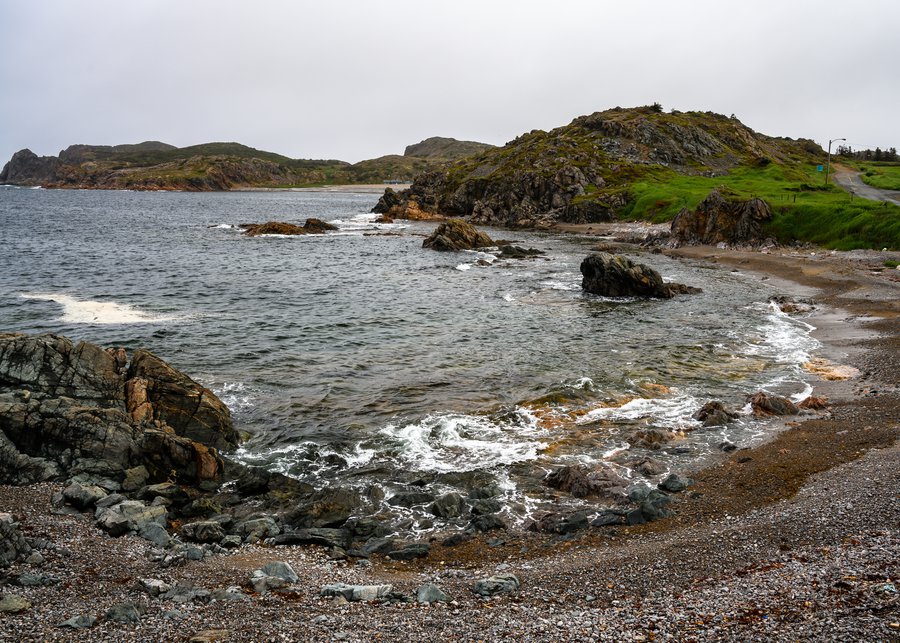 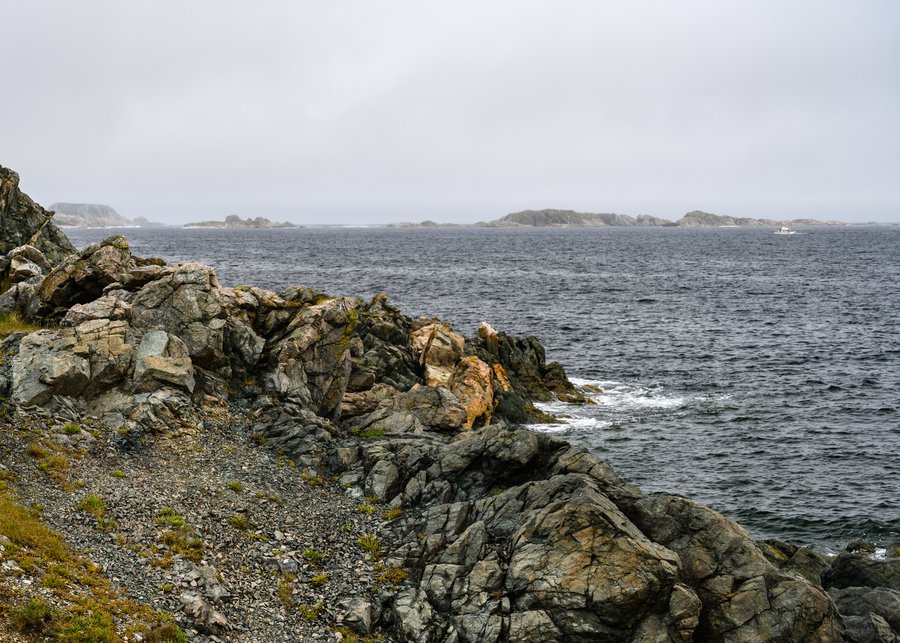 As you can see, I am 'chilling'--it was blustery and the back of my chair said something like "Blow Me Down Andrews." 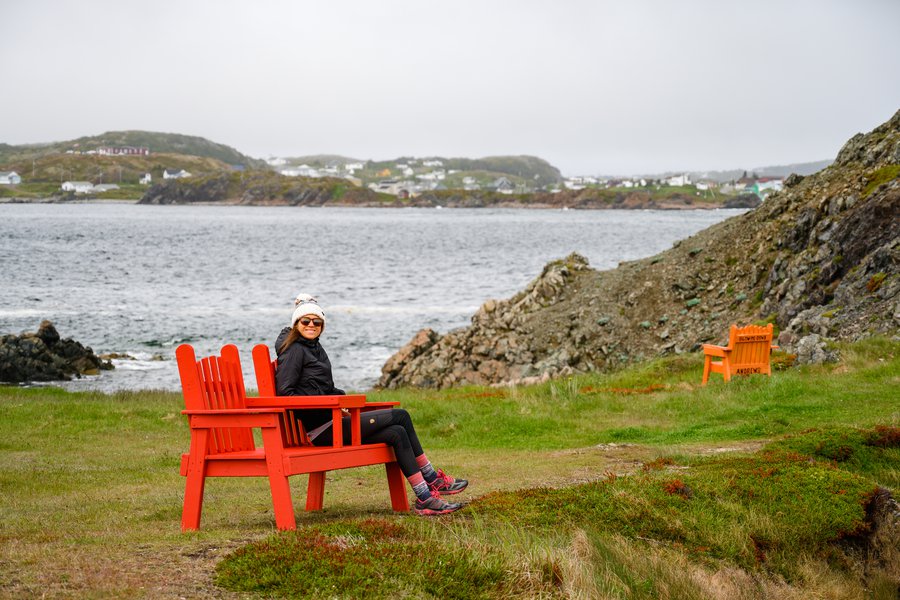 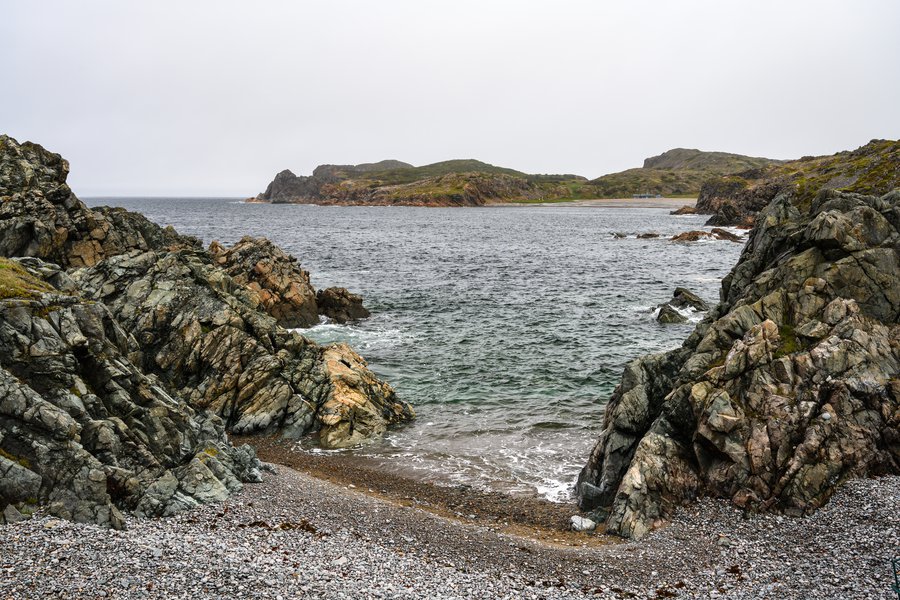 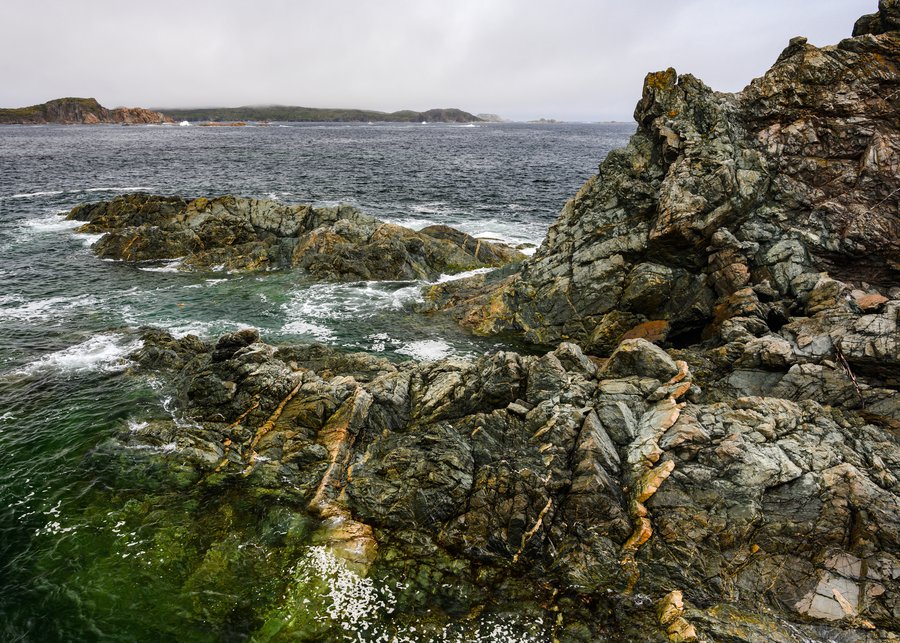 From up on this little promontory, 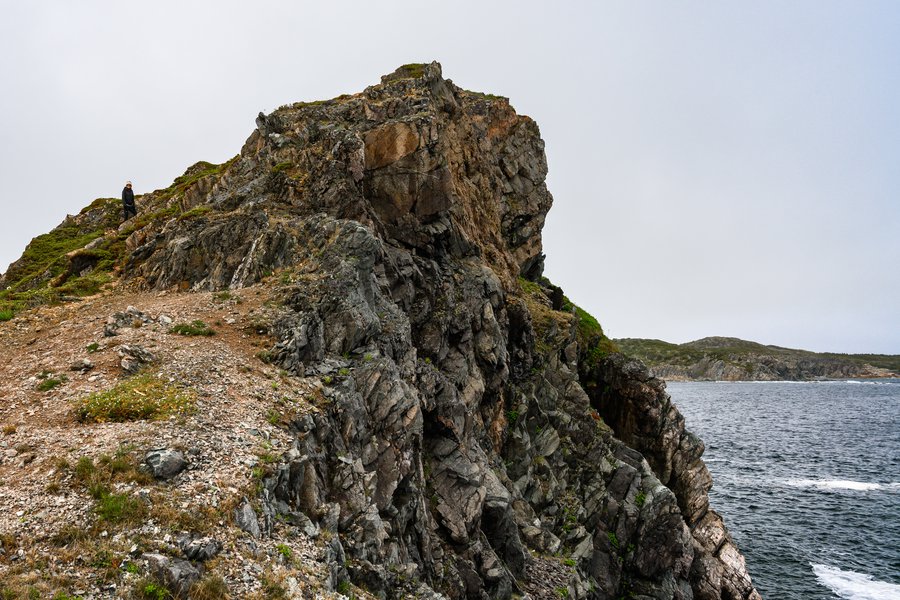 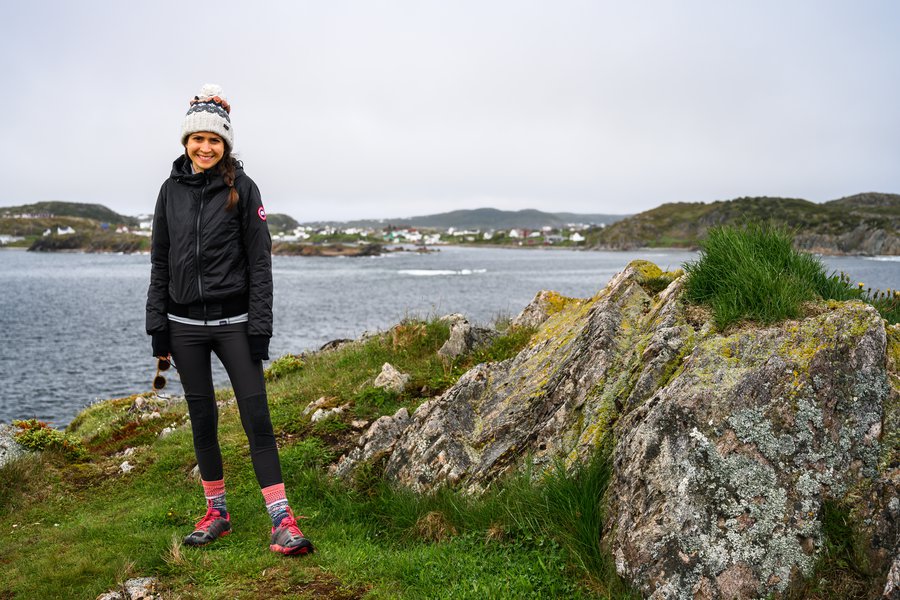 this was the very Irish-looking view. 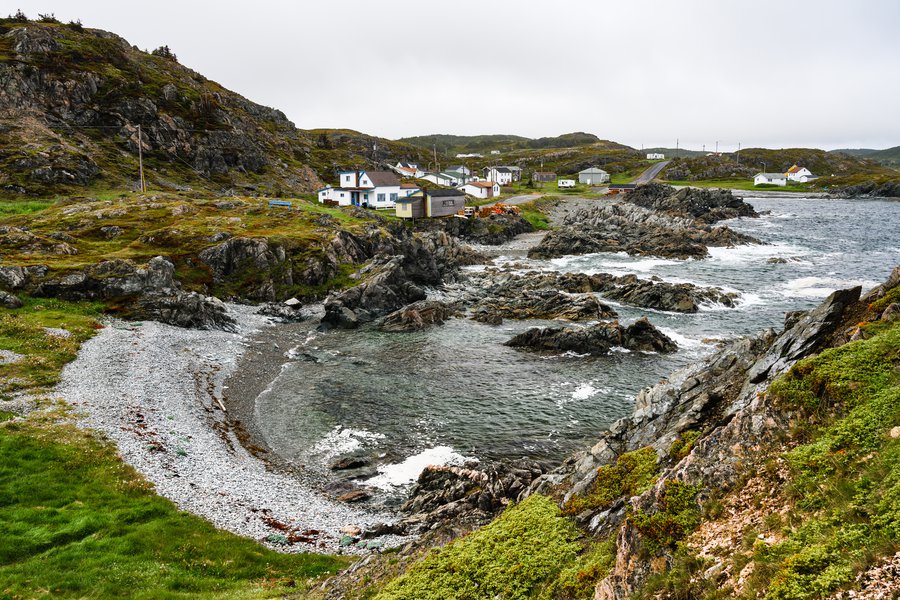 The landscape seemed a mix of all the places we love: Scotland and Maine, the Faroe Islands and Ireland. 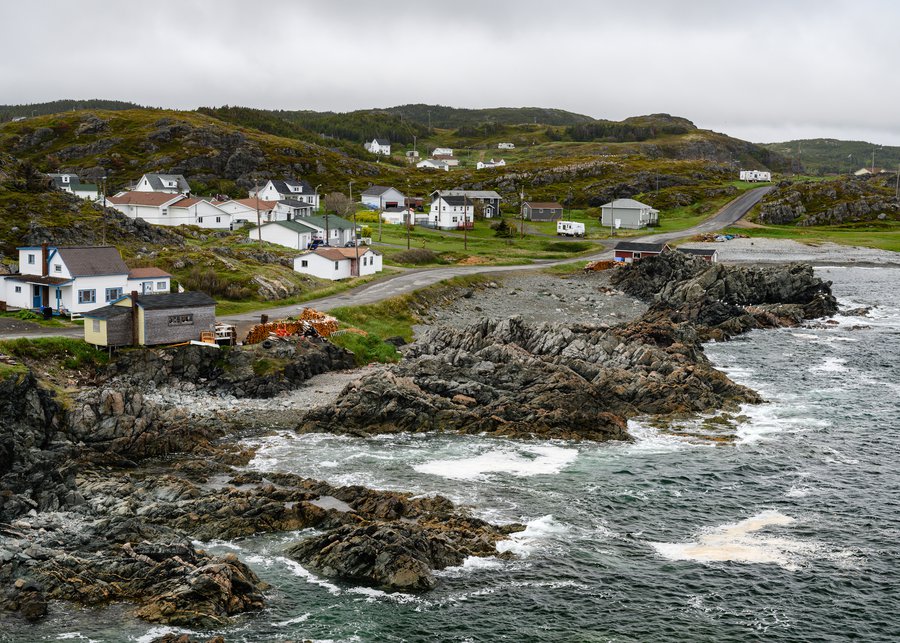 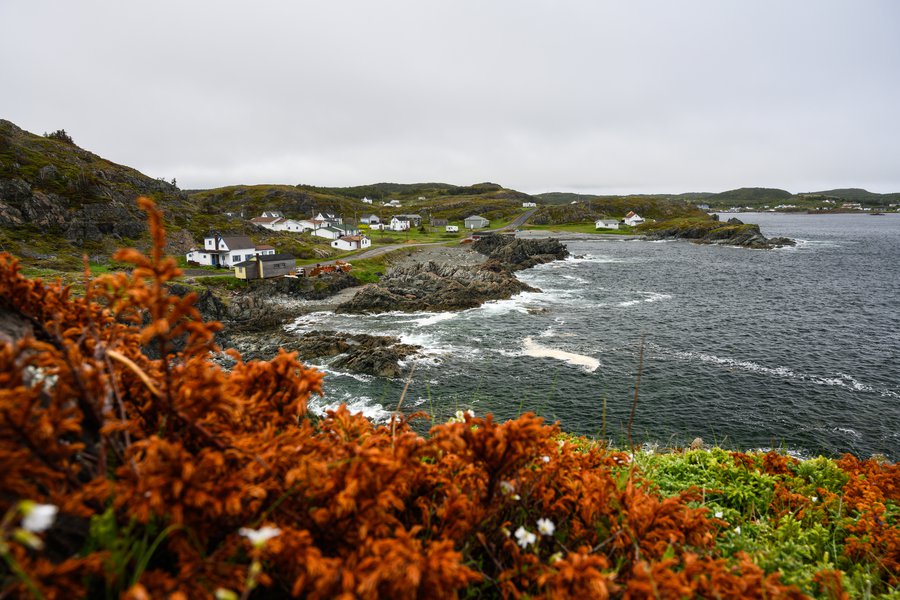 Later that afternoon, on the way back from our hike, we drove to the very tip of the island to Long Point Lighthouse, whose horn had been our dull evening melody. 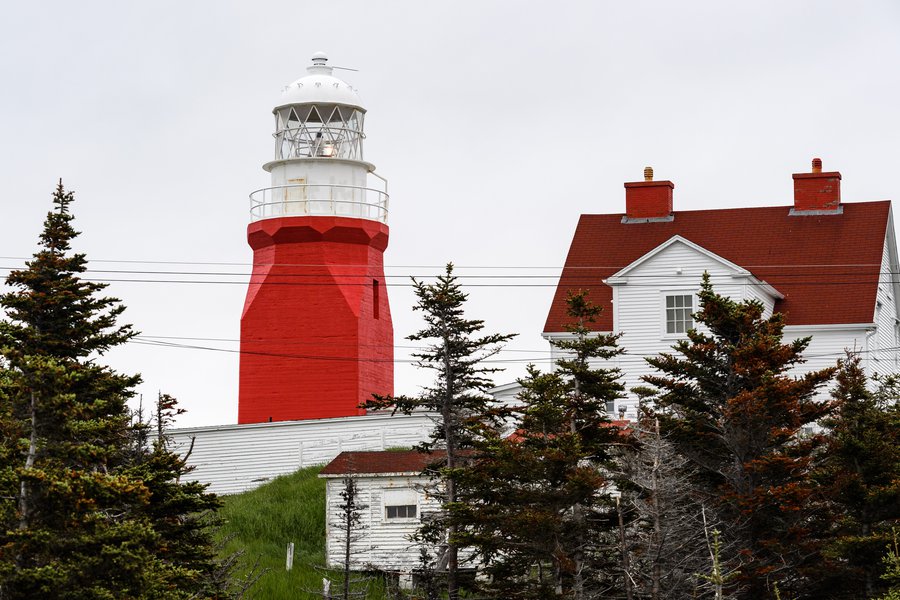 And on the drive back, two things made us be suddenly still, watching the surprise: an iceberg, far, far in the distance, 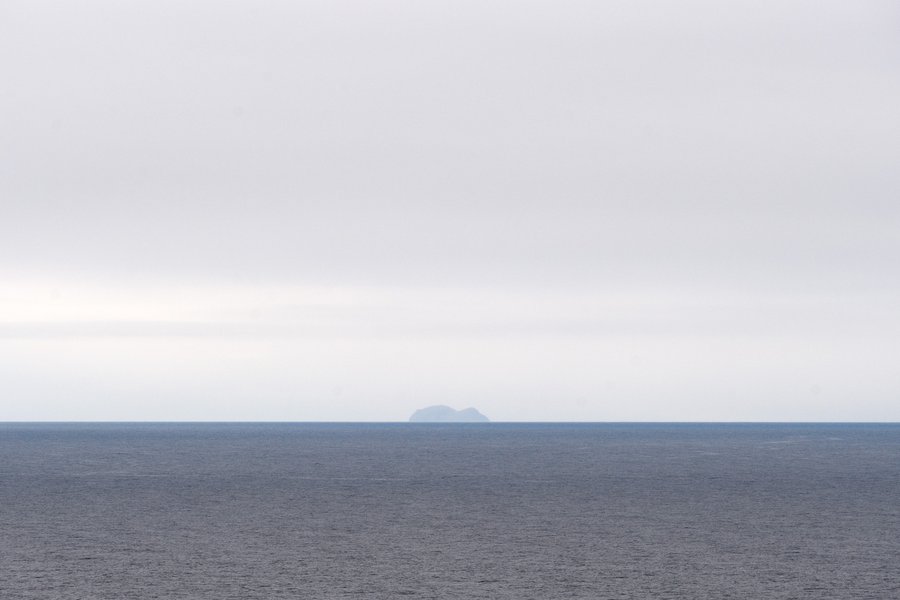 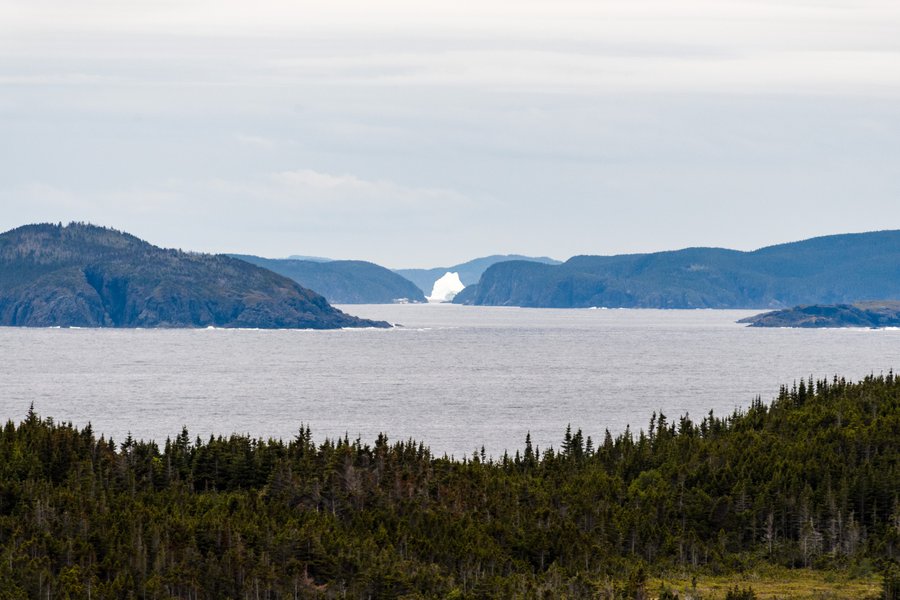 And this sly little fox, who ran around in front of our car, and we paused to watch. 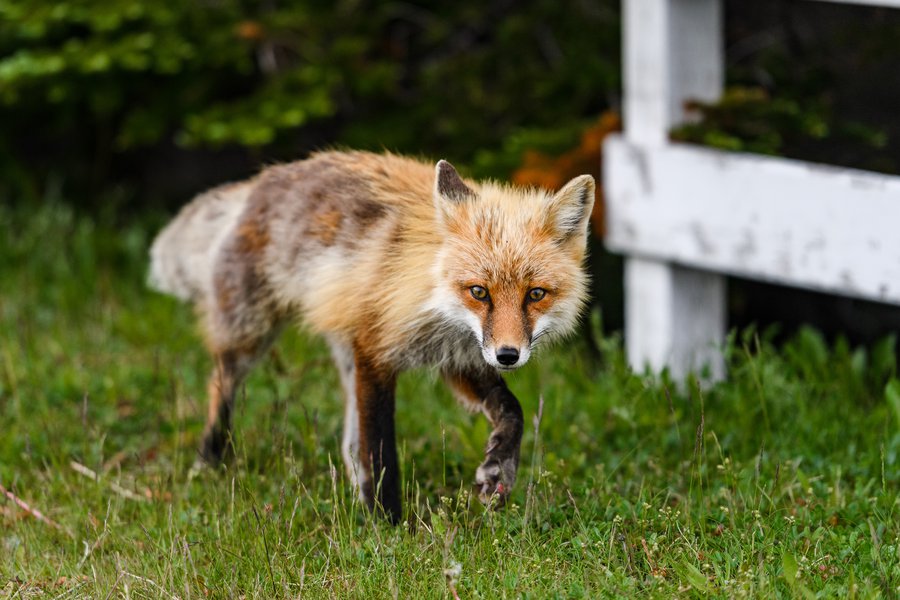 Can't wait to share more of our time in Newfoundland, coming soon; our hilariously wet hiking journey is next up! 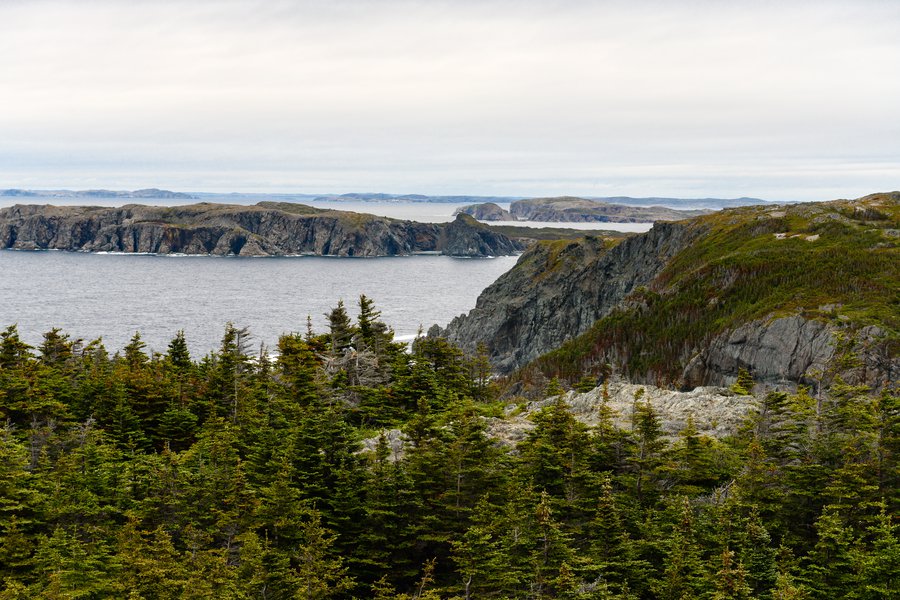