We're being woken by birds and sunshine these days, and walking through weather almost as warm as Italy. Here it is, over a week since we've been back from our travels. No joke, we're only about halfway through the photos.

If you've missed them, check out our latest travels here:


Overview of all 9 cities
Sorrento
Pompeii
Amalfi Coast
Mozzarella factory
Florence and Tuscany
(and a couple in-betweeners here and here.)

Rome is an epic destination, with pagan, Biblical and early Christian history stuck into the ancient mortar and arches. I could write scrolls upon scrolls about this place, but for now, to keep this blog fresh and recent (and to keep you reading!), allow me yet again to summarize. Fast and furious, viva Roma! 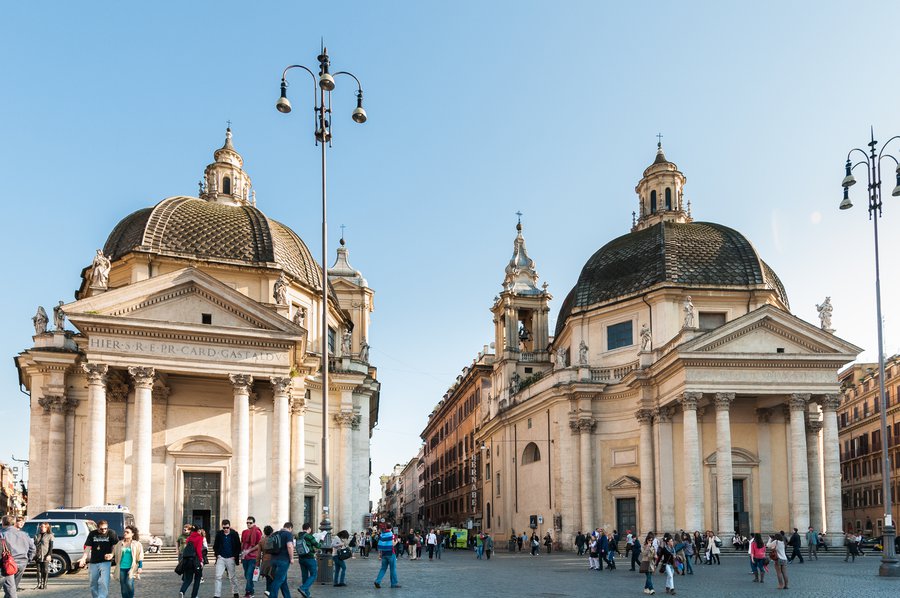 (Is there a gene for competition?)

Walk and Alie
Since we've been married, we've taken about 10 photos of us together (for shame), so here are two to boost up the stats by about 20%.

Spanish steps
The widest steps in Europe, they abut the house where poet John Keats lived and died,

and welcome a whole lot of happy campers as the sun slips away. 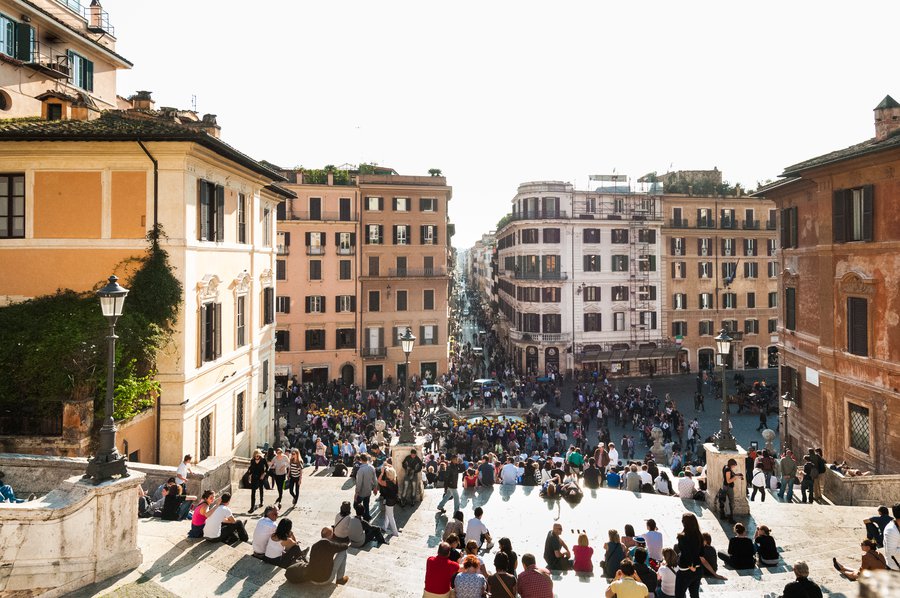 Arches, and poppies.
The Greeks and Egyptians may have invented the idea of an arch, but the Romans popularized and propagated it.

Titus arch.
Built by Jewish captives for the Roman Emperor Titus to commemorate his victory over Jerusalem (which the Gospels prophesied) in 70 A.D. 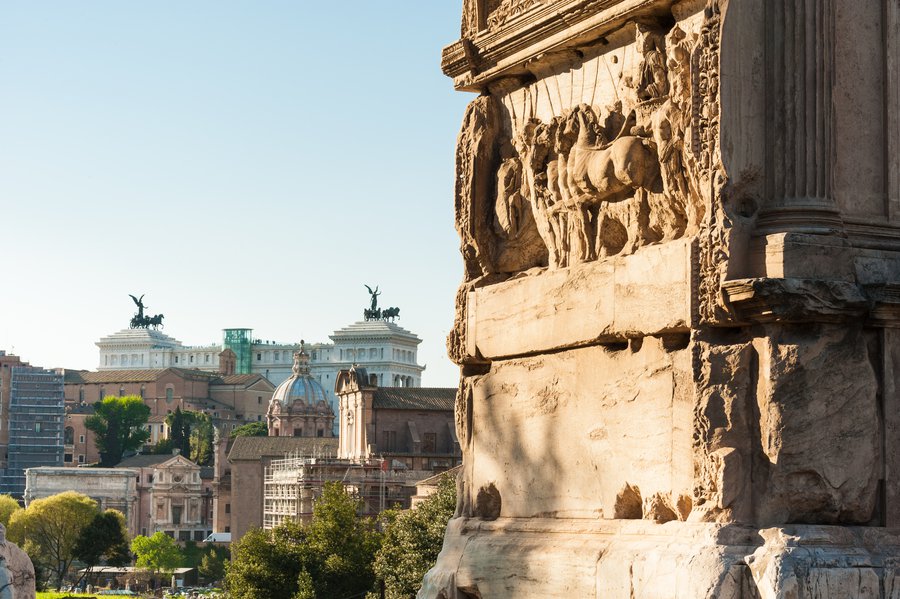 Trees and columns
These trees make me think a giraffe is going to lope through the photo; nope, just columns of the Roman forum reside in this park. 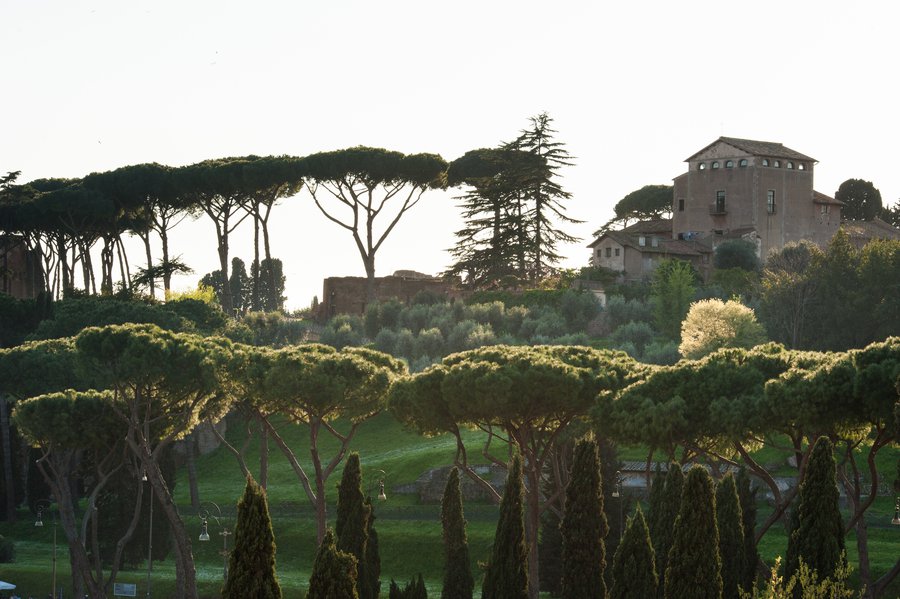 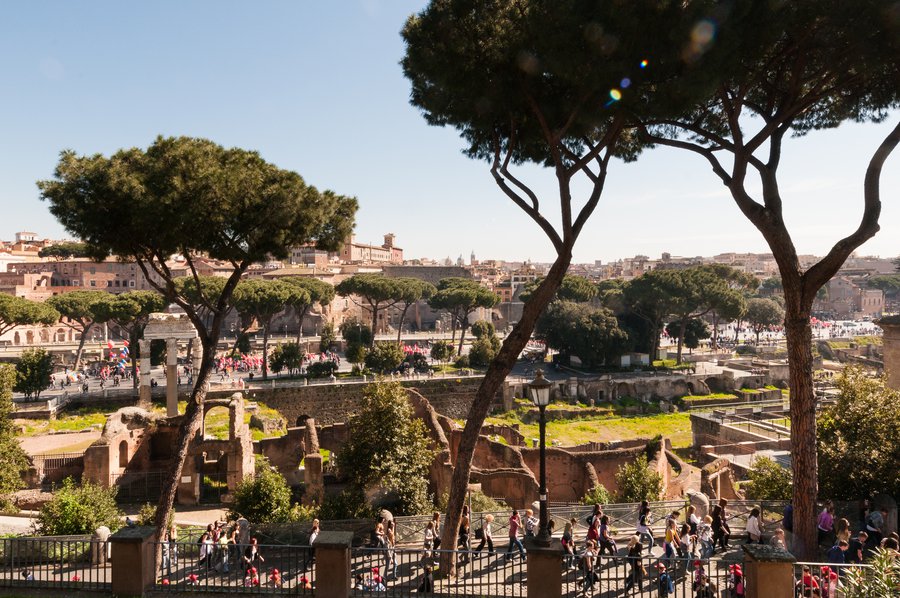 Rubble
Rome just can't get rid of it, I tell you! The sheer age of all of this is boggling. 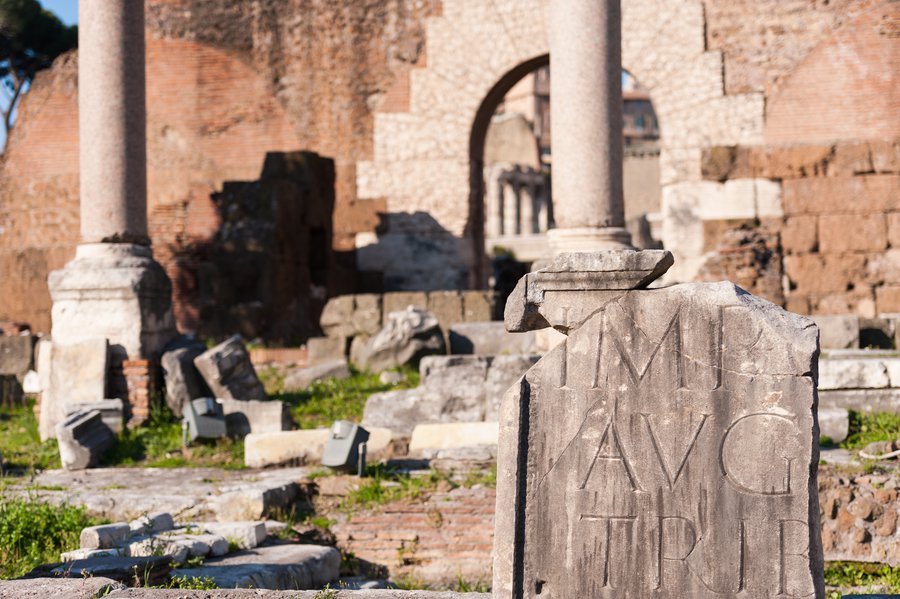 It really is spectacular how old everything in Rome is. The Pantheon, an ancient temple, revolutionized the dome ceiling. 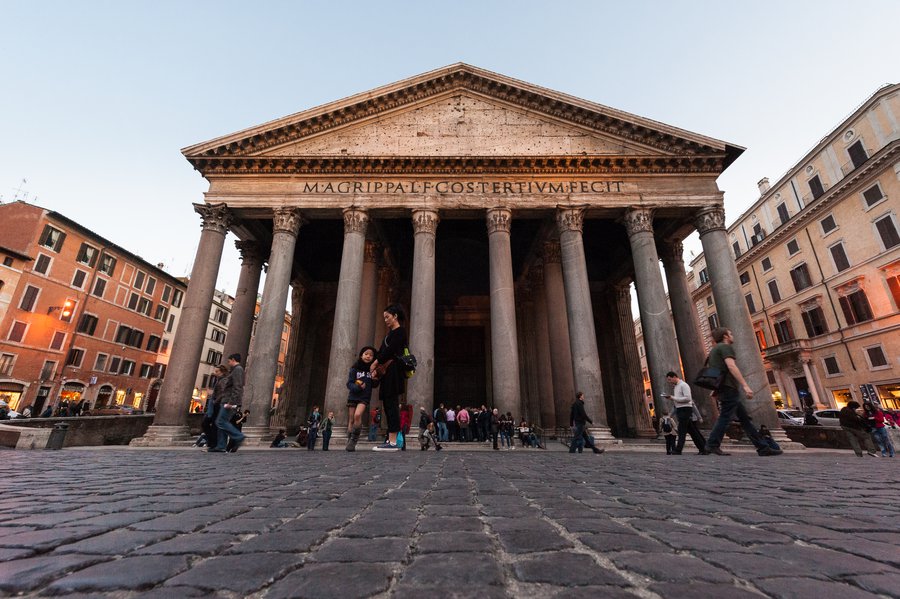 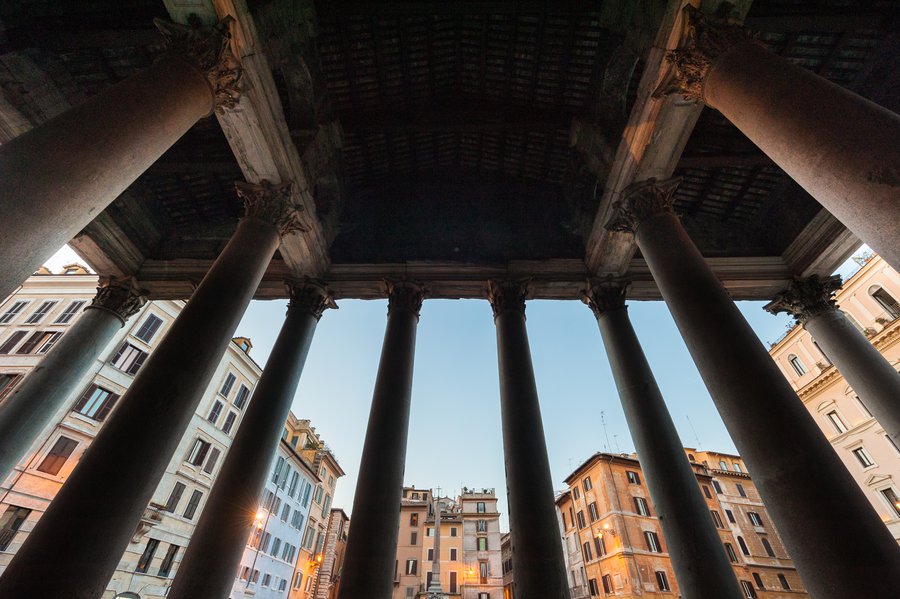 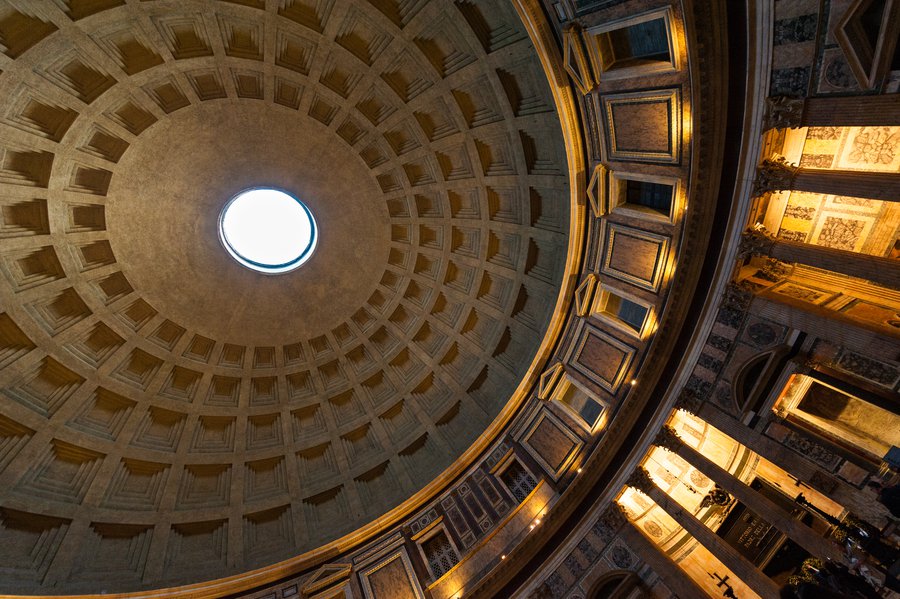 now turned into a Catholic sanctuary. 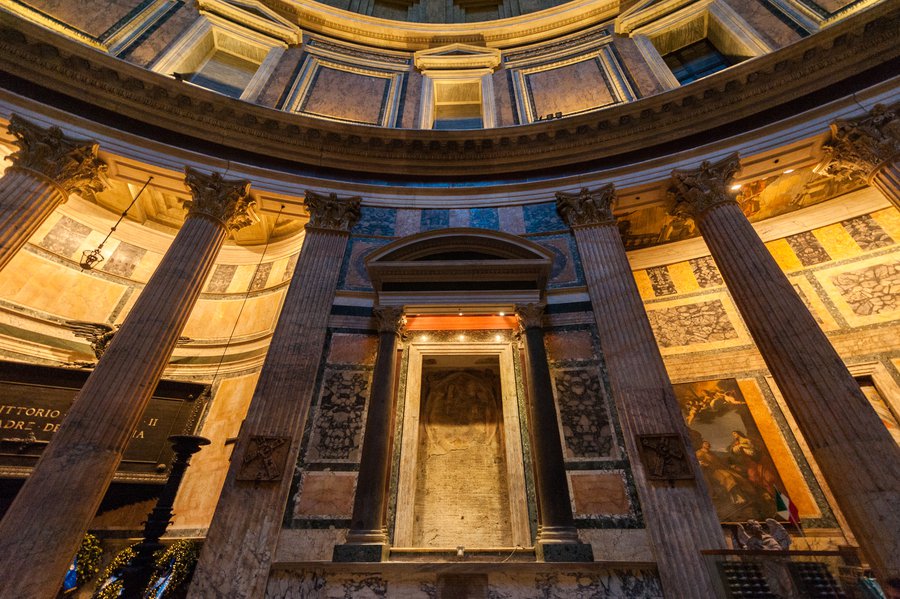 Other famous upwards views in town include these, spotted in the Vatican, the single wealthiest place I've ever been, I reckon.

The Vatican houses the one of the holiest sites in Catholicism, St Peter's Basilica, where Peter is allegedly buried. Although the building is mammoth and ornate, I was surprised at how non-gaudy it was. Walker shot this, and I think those beams are wonderful. Go, hubby! 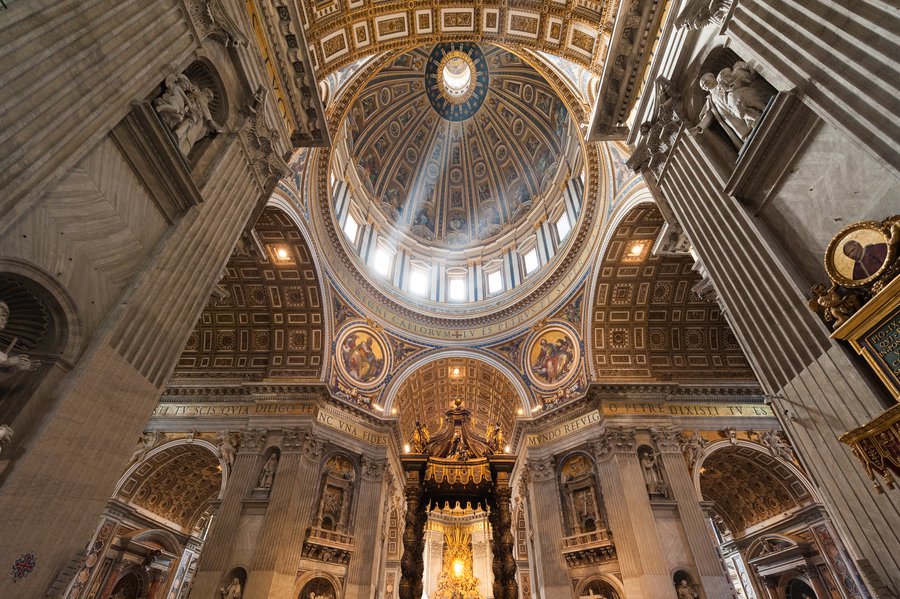 This is another view of the Basilica. Sadly, photos of the nearby Sistine Chapel were strictly prohibited; walking underneath that famous reach was dizzying, humbling. Go, Michaelangelo! 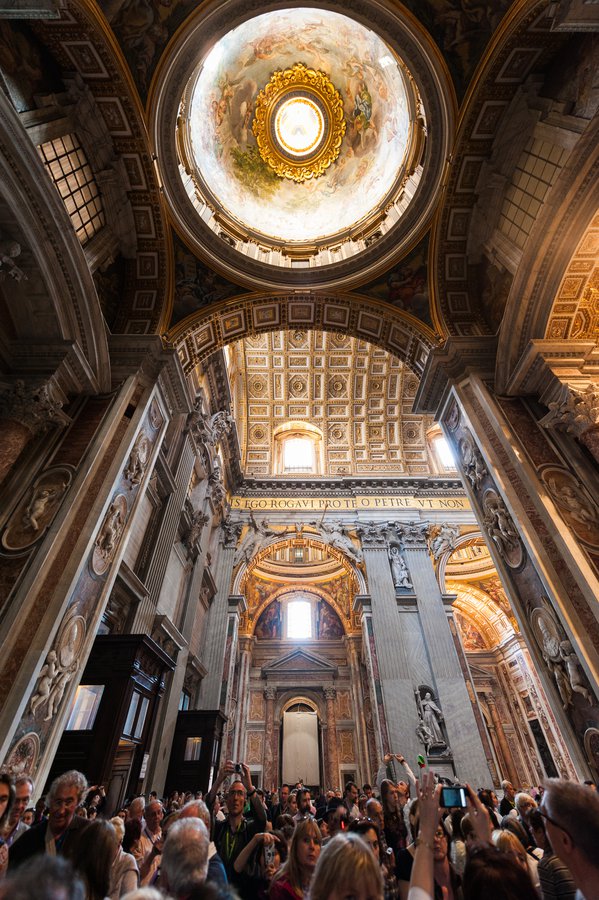 Our Vatican and Colosseum tour guide's name was Guido, a full fledged art geek. Here he's pointing out the Vatican (I think, but obviously, I'm distracted by the man with the camera) on an ancient map. 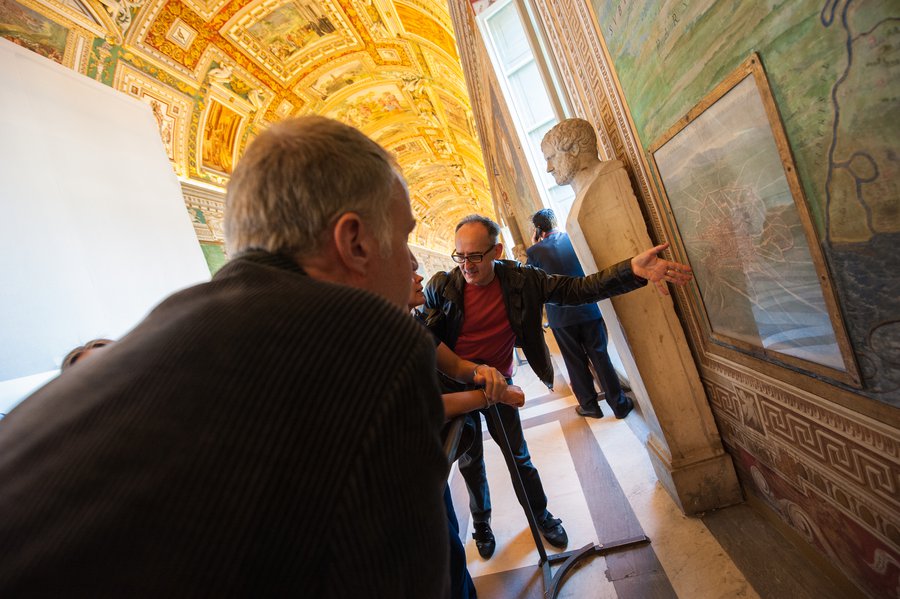 These tapestries covered whole walls for a long hallway; Guido said it took a day to weave 10 square centimeters. 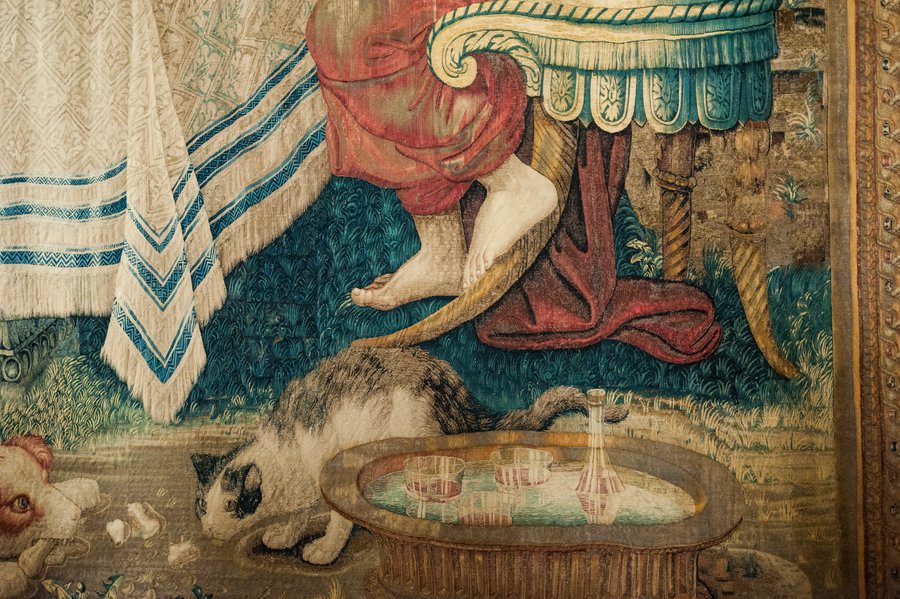 The Colosseum, famous of the famed icons in Rome, reminded me of a sports stadium. Except not. Strange what can seem normal. 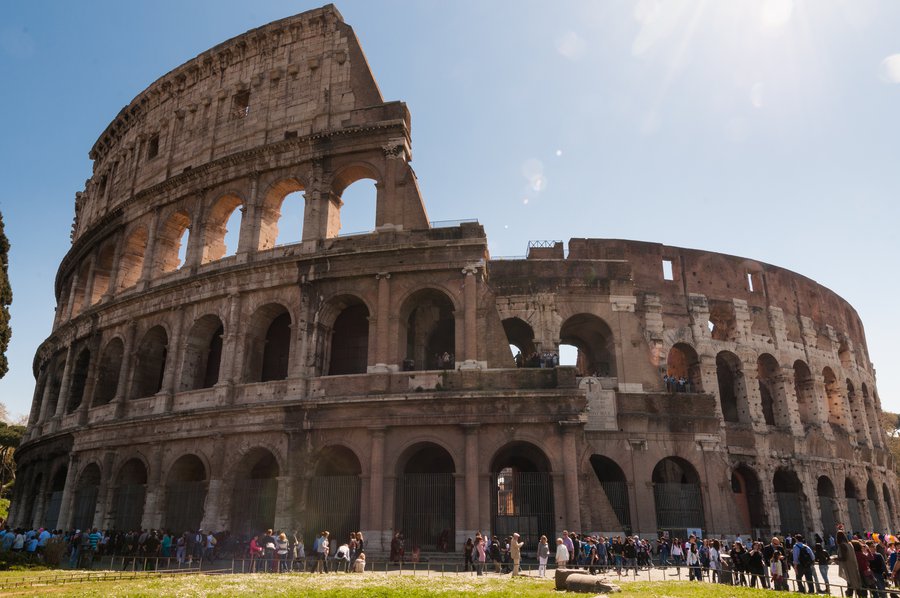 The only time I've ever wanted to rewatch Gladiator was inside here. You do have a name? My name is 'Gladiator'. These compartments were for the wild animals; primitive elevators and trap doors released them to the arena. 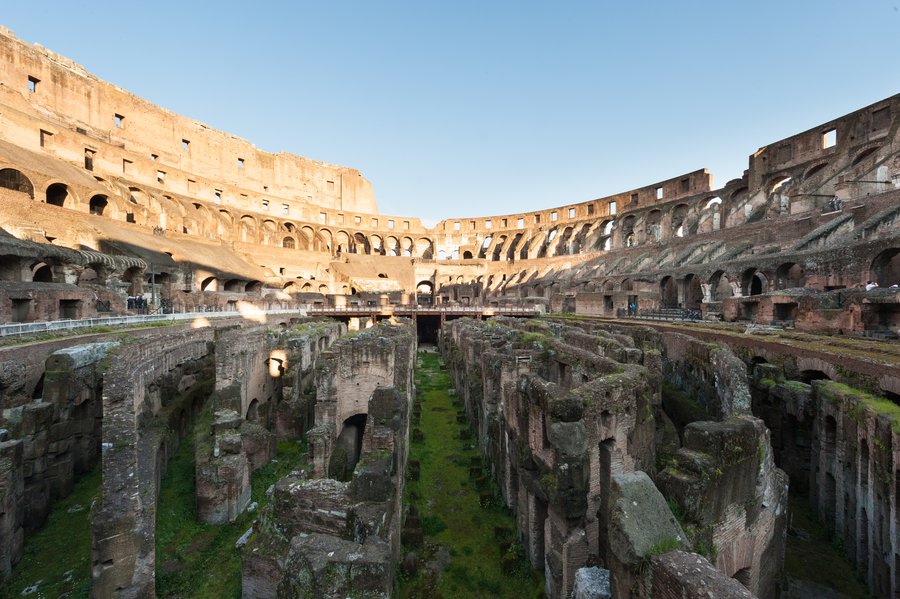 Moving on to the more cheerful, this is my smile of pure relief for the shade. I thought I'd never say this again, but the sun was actually too hot. 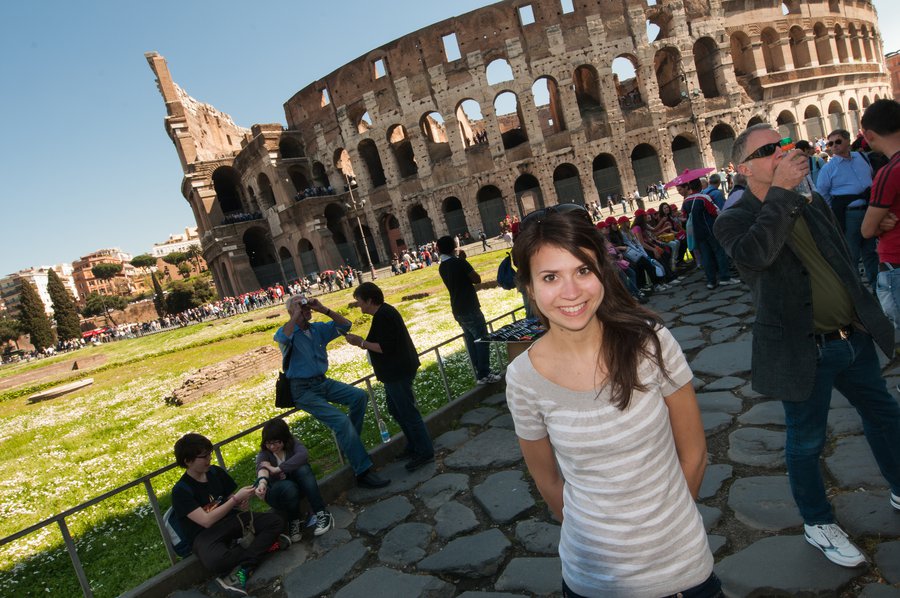 Check it out: the most famous fountain in the world, the Trevi Fountain, 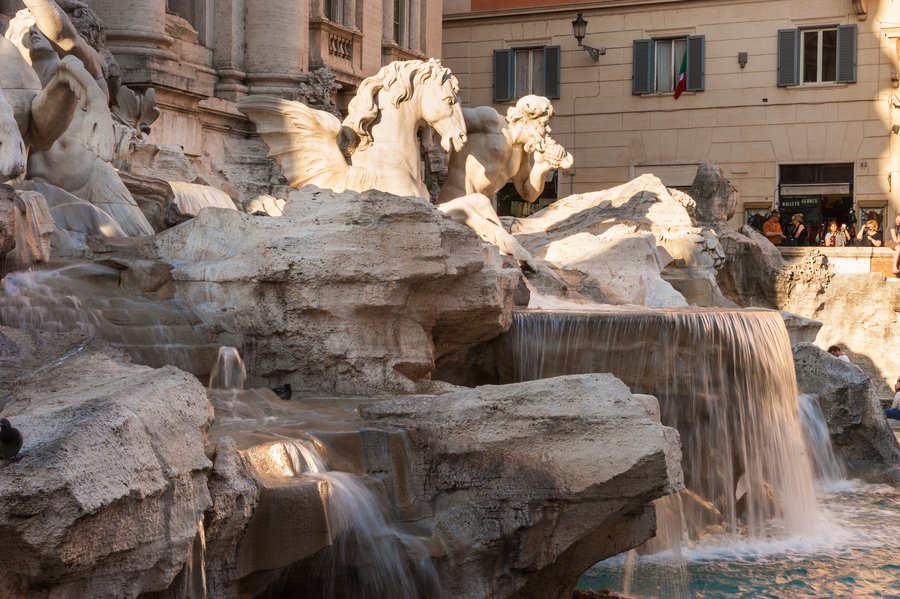 and the most fabulous mom-in-law in the world. 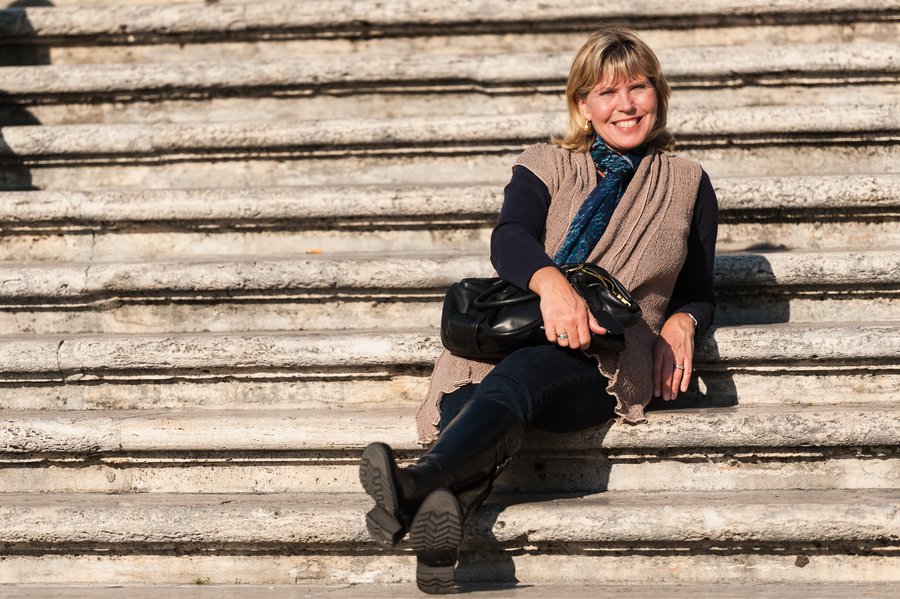 As we walked along the ancient buildings and roads, above us, on the modern roads, Eastern music blared and hundreds of red balloons floated. Bonus points for telling us what they (many senior citizens) were celebrating (protesting?). We're still at a loss. 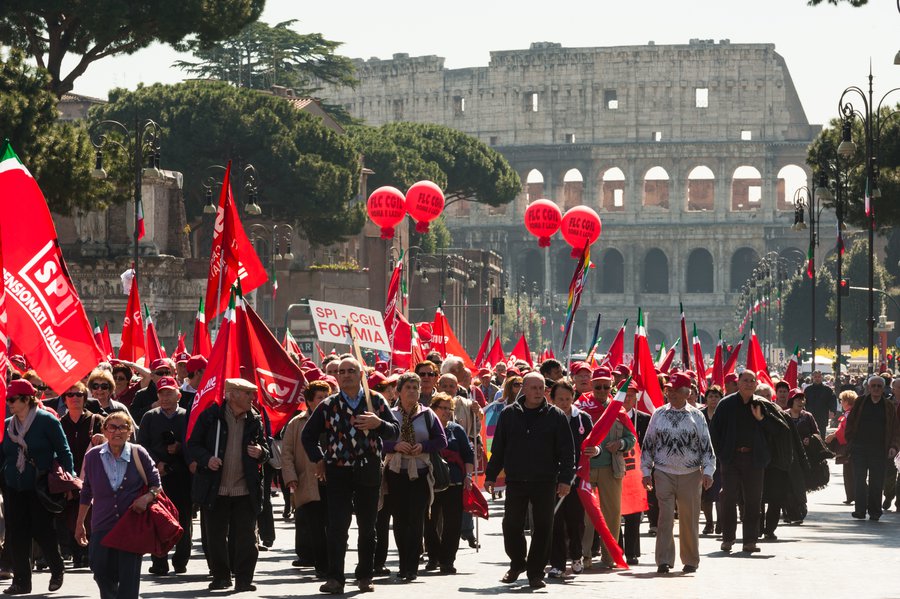 An empire that dominated the world was housed in this town 2000 years ago, and today there is this, 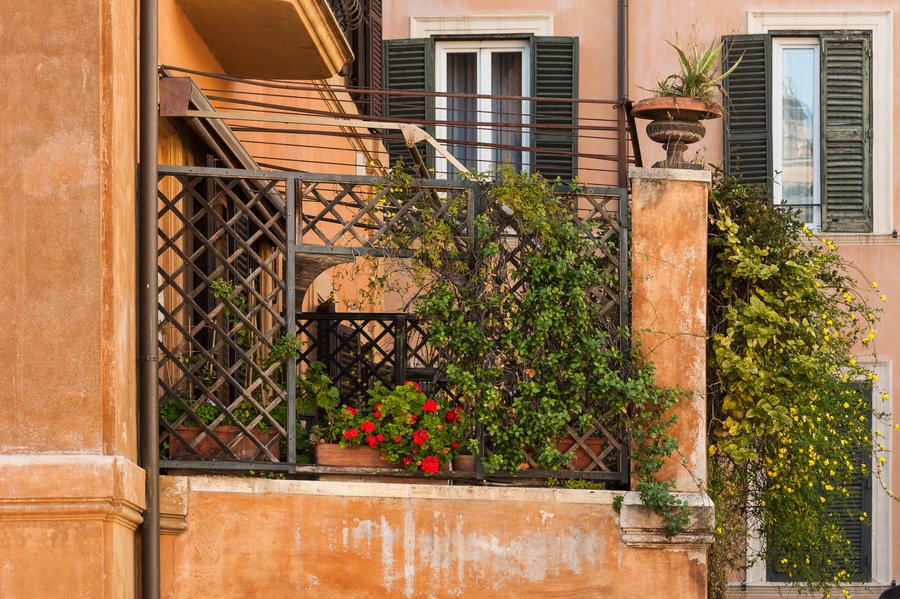 and a sense that you might just find a leather sandal strap buried in the grass. Old is the new new.