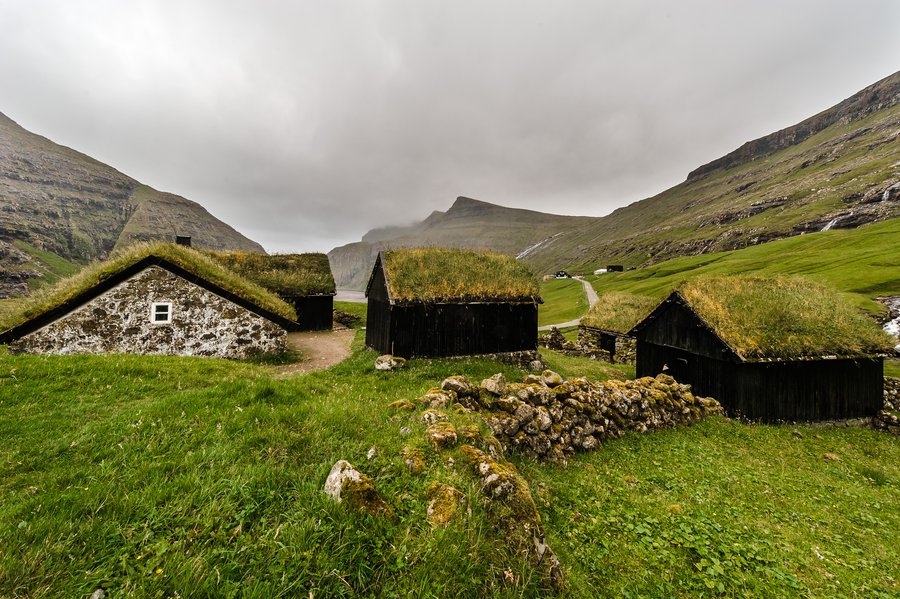 The New York Times just listed the Faroe Islands as the Next Scandinavian destination, and although I'm a little sad the secret is getting out, it is also a very well-deserved accolade. The Faroe Islands have been on our travel wish list for years and were the definition of magical at every turn---completely untouched and tourist-free. We can't rave enough about these insanely beautiful islands and I'm so excited to share photos at last! 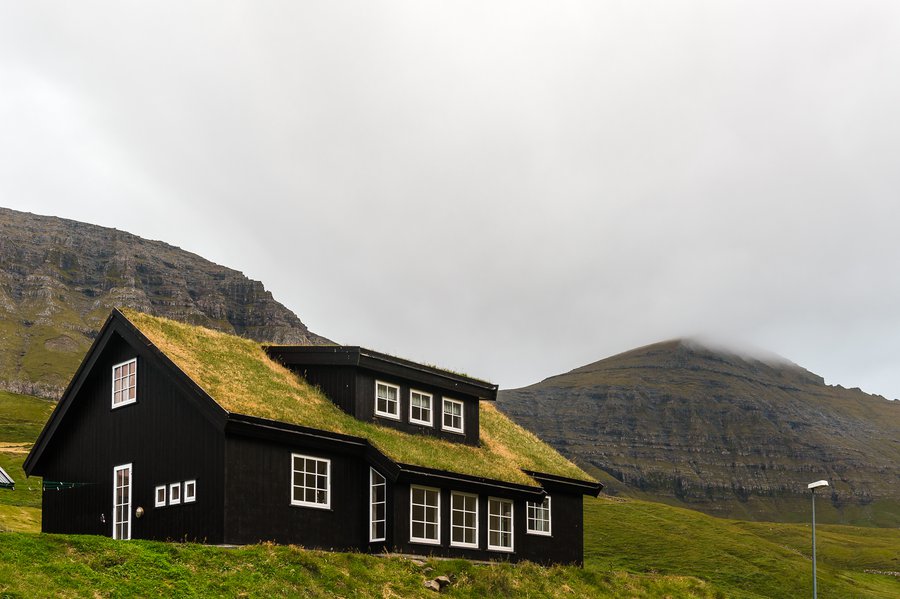 The Faroes are a collection of 18 remote islands that sit between Iceland, Norway, and Scotland, but are technically part of Denmark. The steep sea cliffs are home to thousands of birds, and the islands are connected with an elaborate set of long tunnels; these go both underground between islands and through the mountains on the islands. 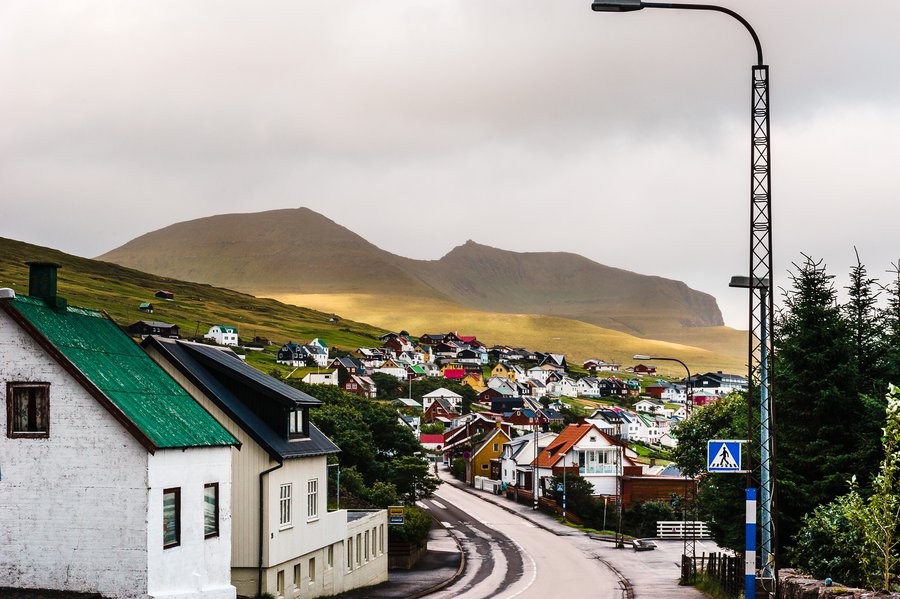 We took the Faroese airline from the local Iceland airport into Vágar, one of the western islands. I'm fairly sure we landed in 25mph+ winds, which the pilot said was normal. There were no open rental car kiosks, so the tourist information booth handed us our keys and we were off. Our first stop was the charming town of Gásadalur, population 18. The winds nearly knocked me down; I sat down shortly after this from their intensity. 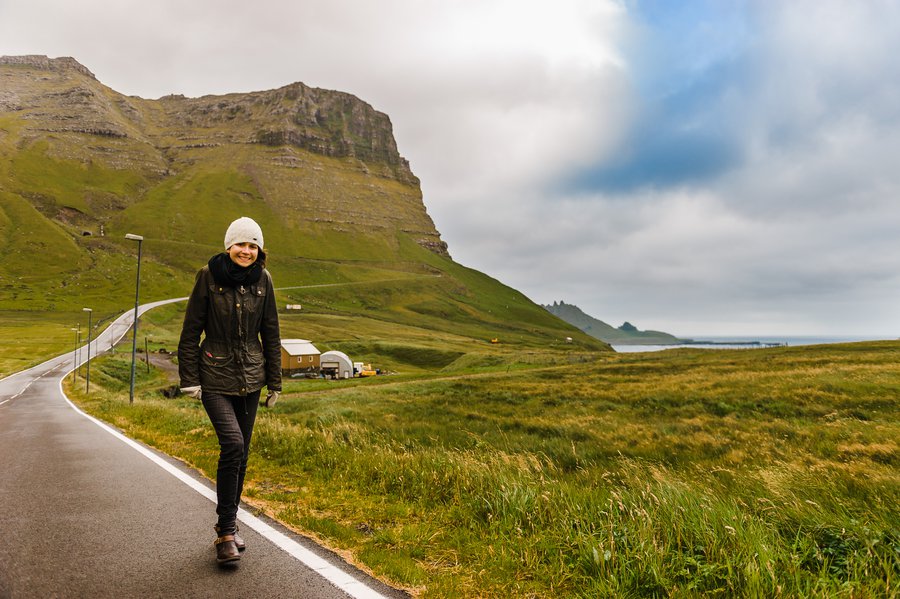 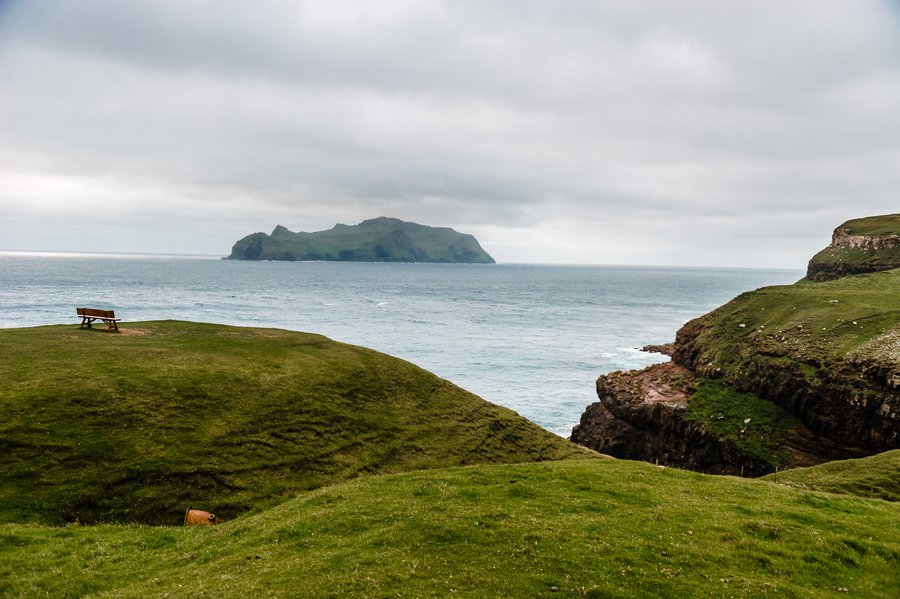 The electric green grasses were much brighter than Iceland, but there were similarities--like the number of waterfalls. 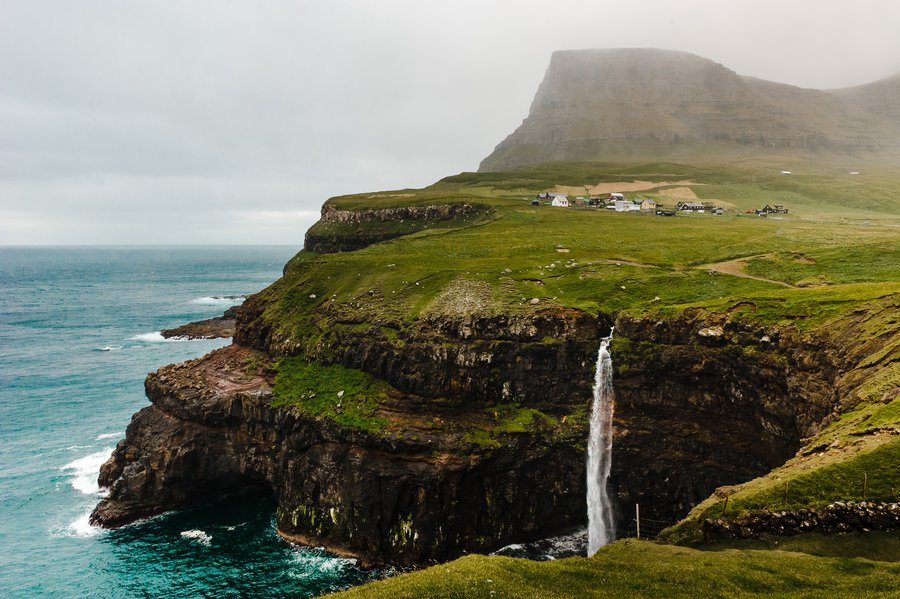 We spent our first evening in the capital of Torshavn, which is on the island directly to the left of Vágar (more on that in a future post), and set out early the next day to see how far we could drive. 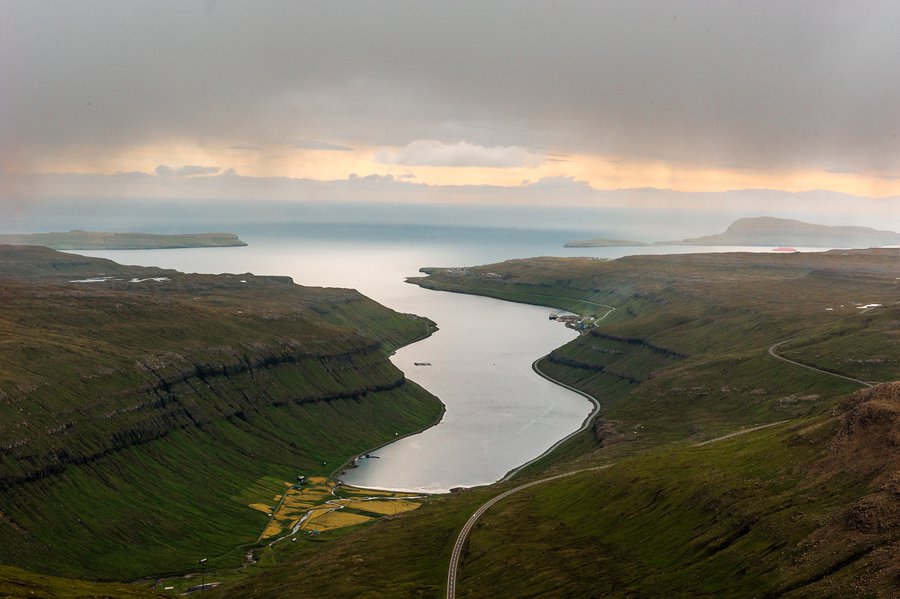 Thick, icy fogs like the Scottish haar had rolled in, so the landscape was reminiscent of Scotland's Mull. 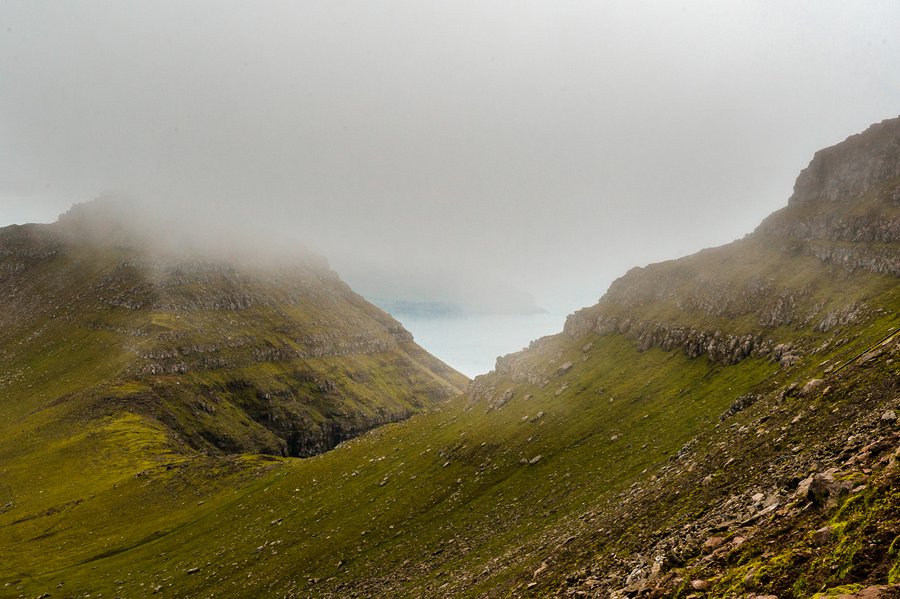 We drove up and up and UP to the weather station on the island, which had to be the highest point on the island. 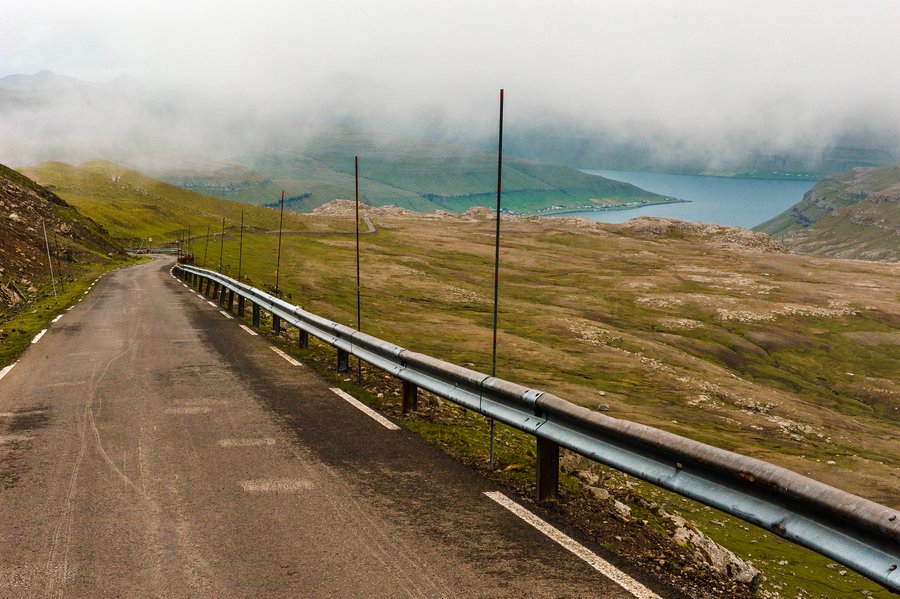 While up there, we encountered the first of what I like to call warrior sheep. I laughed from the car as Walker snuck up and this guy just stared him down. 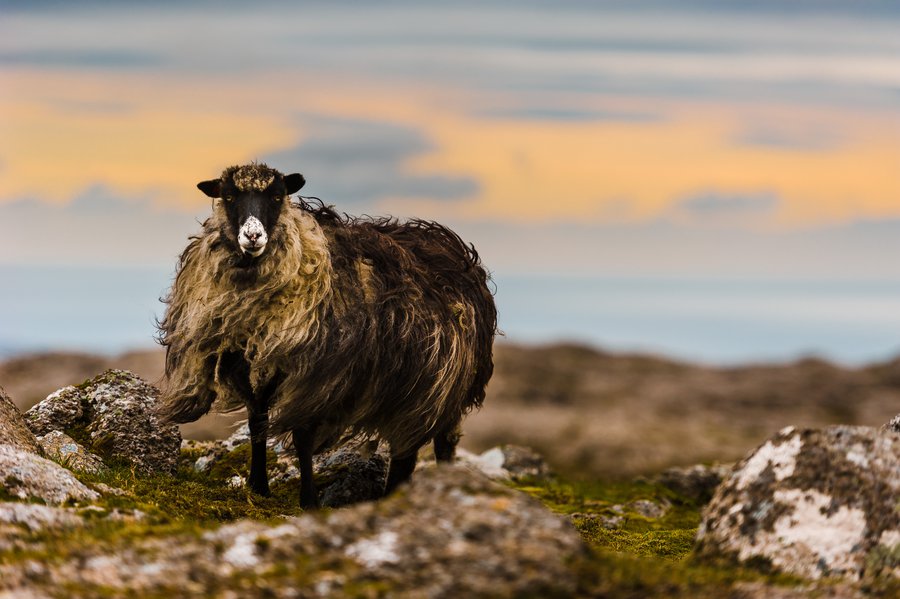 The Tourist Board had free maps in the airport, and I took one that was wrinkly and soft around the edges by the end of the trip. It had scenic roads marked, and the next one turned out to be a favorite. The road to Saksun. 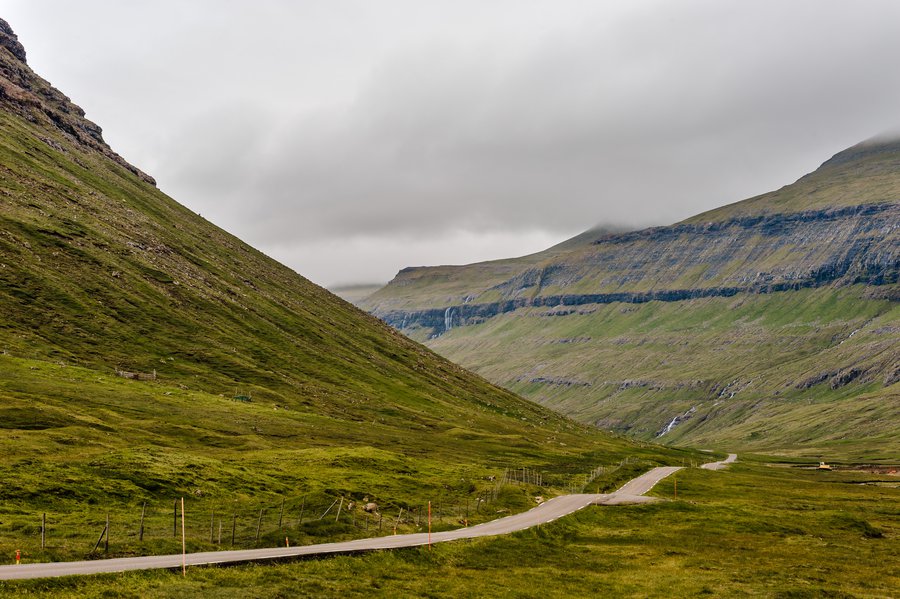 We passed fly fisherman, horses in the middle of the road as we came into a deep inlet in the mountains. 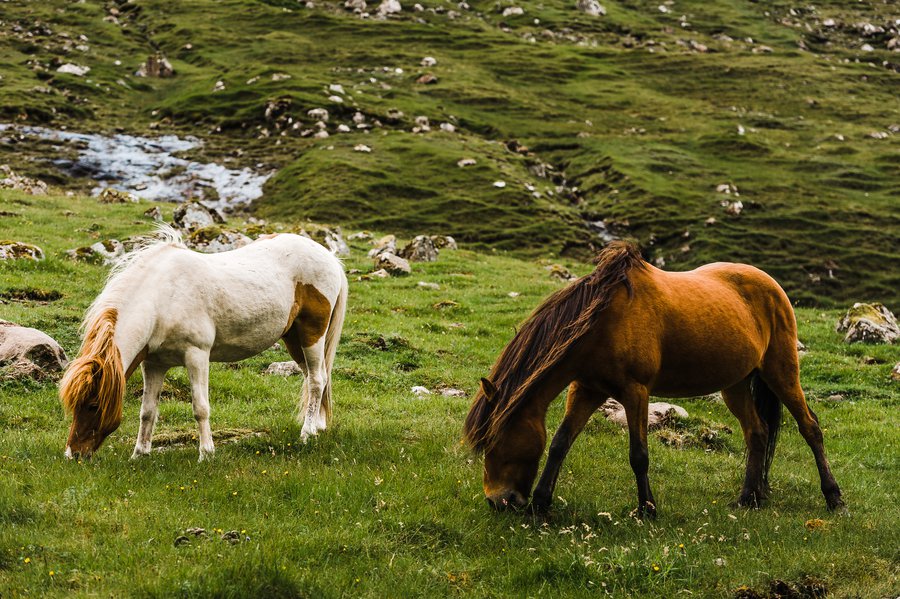 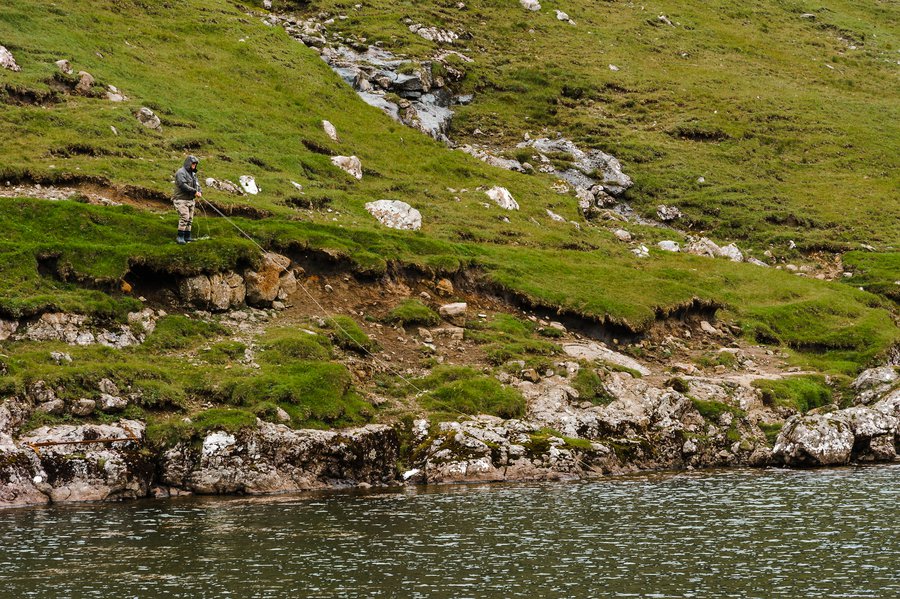 Like everywhere we drove, there was no one in sight. 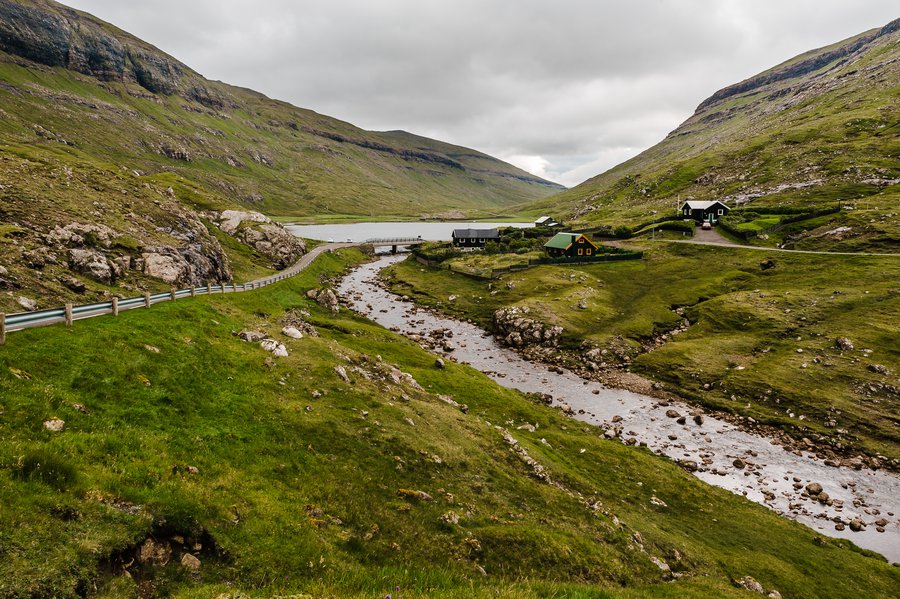 Every single town we passed, no matter how small, had a beautiful white church, usually on the cliffs. Saksun was no exception. 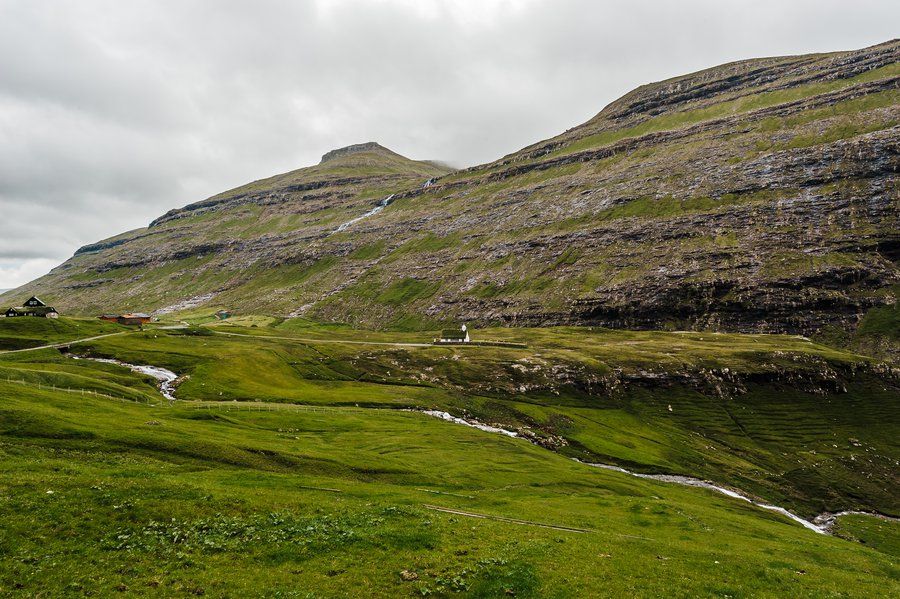 Saksun (population 30) is famed for the 17th century farm buildings, which are well preserved. Later in the trip, I asked a waiter about the grass roofs and he was surprised at the question and said they were just good insulation. 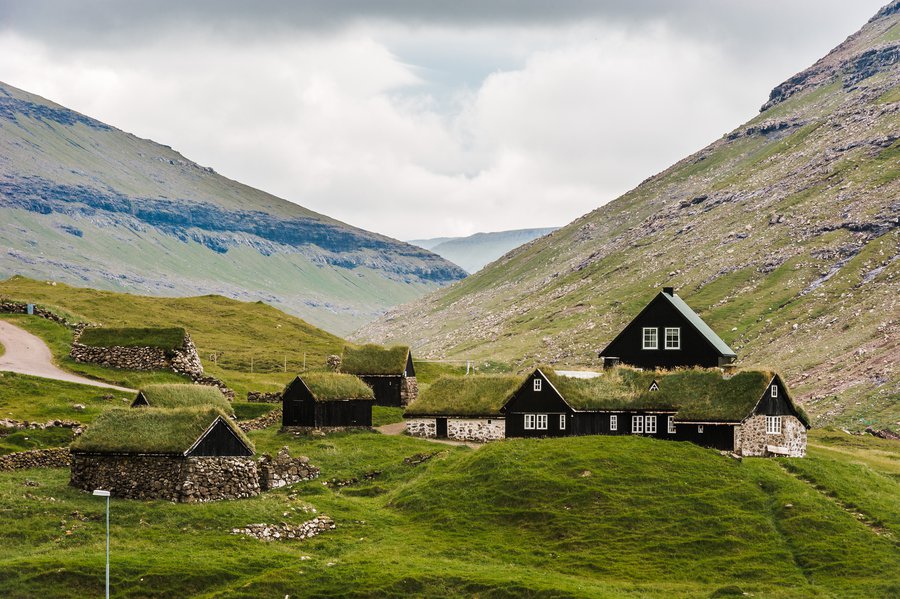 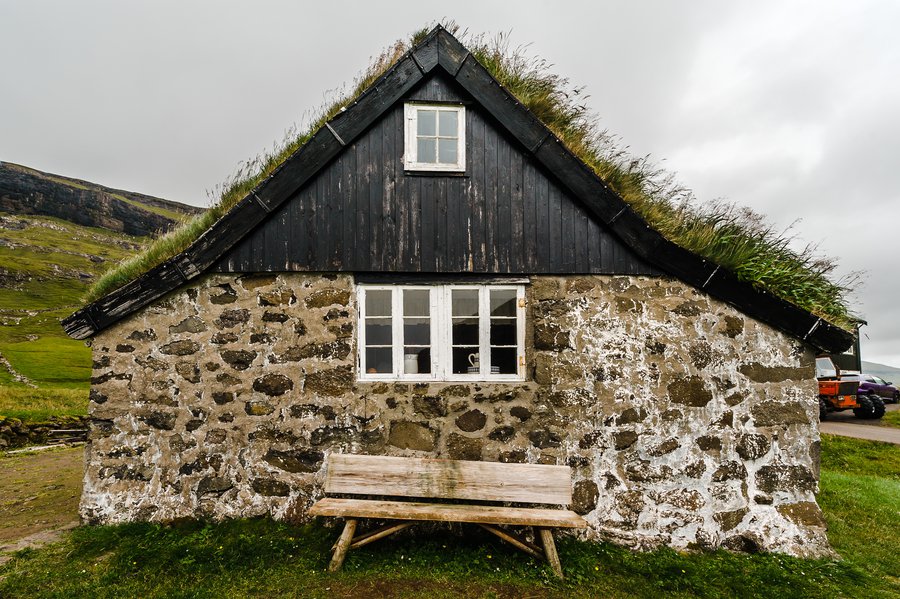 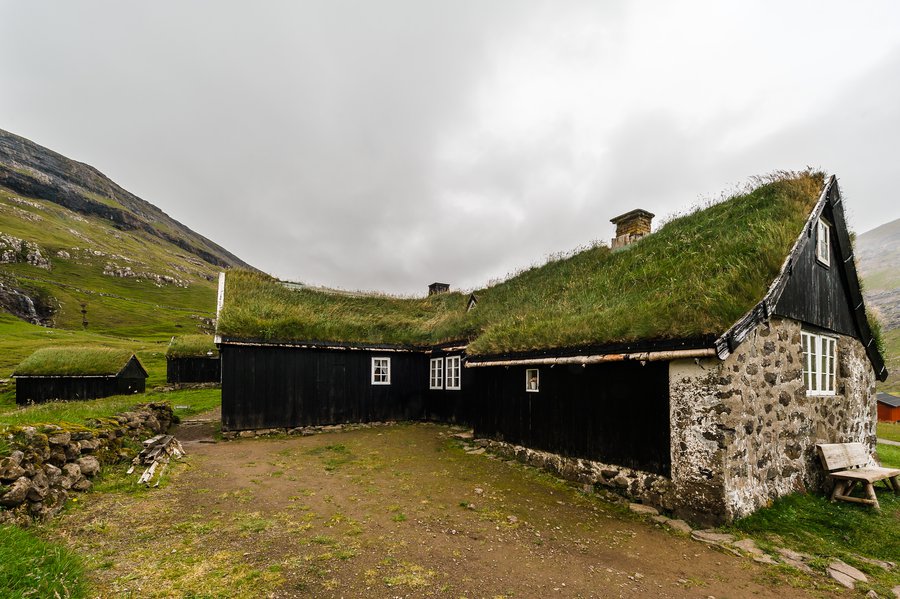 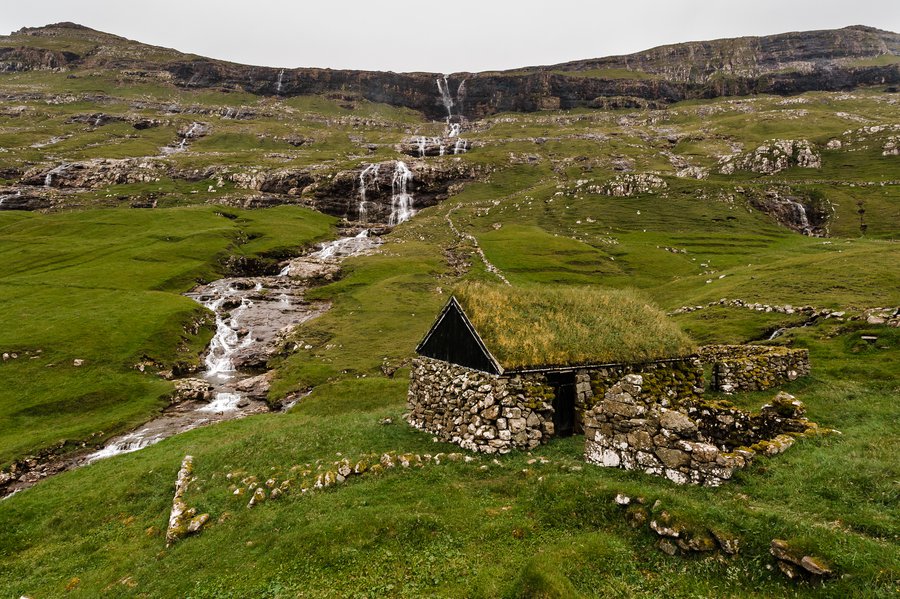 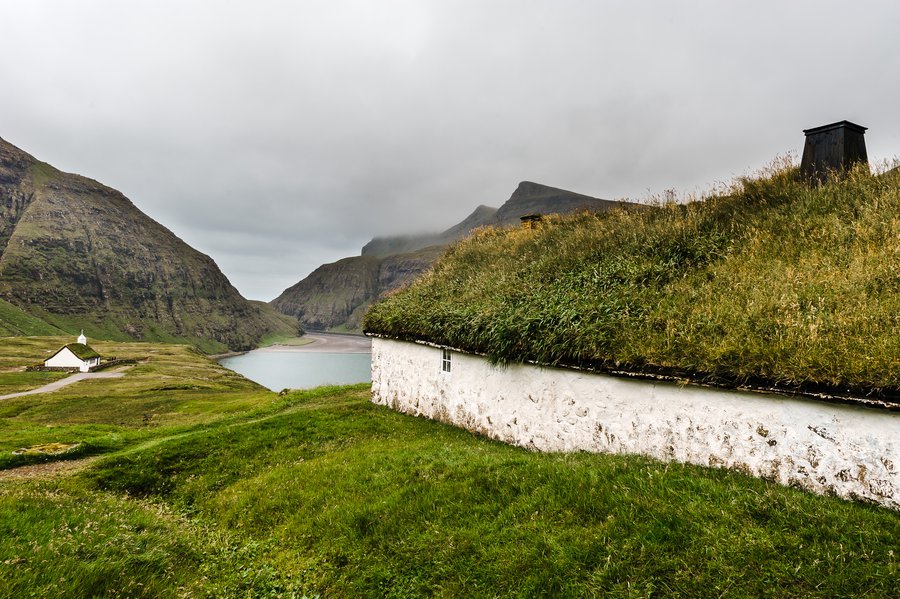 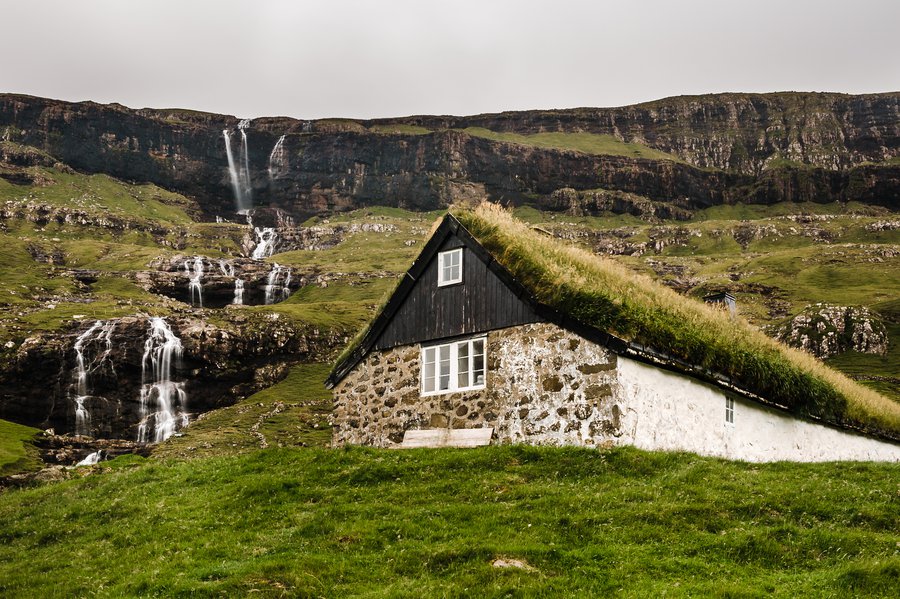 Since we wound through so many towns on this trip, I thought I'd break them down a bit so you could enjoy each one. Coming up next: the island of Eysturoy! 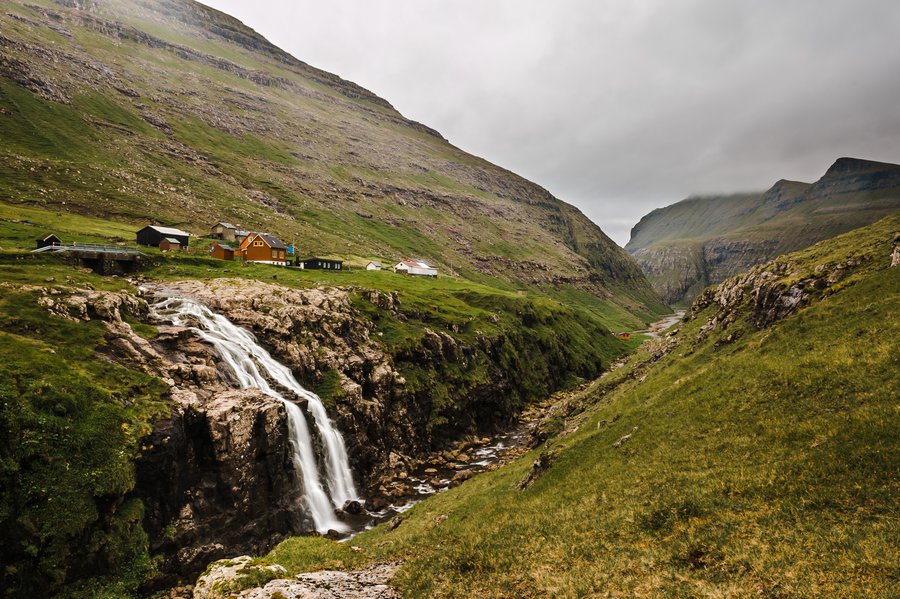