We're in the home stretch here with photos from our trip to Finland last month, and I'm almost sad to stop writing about it, because I can almost feel the hospitality and warm welcome we got as I type. And the sour sea buckthorn berries sprinkled on our food. 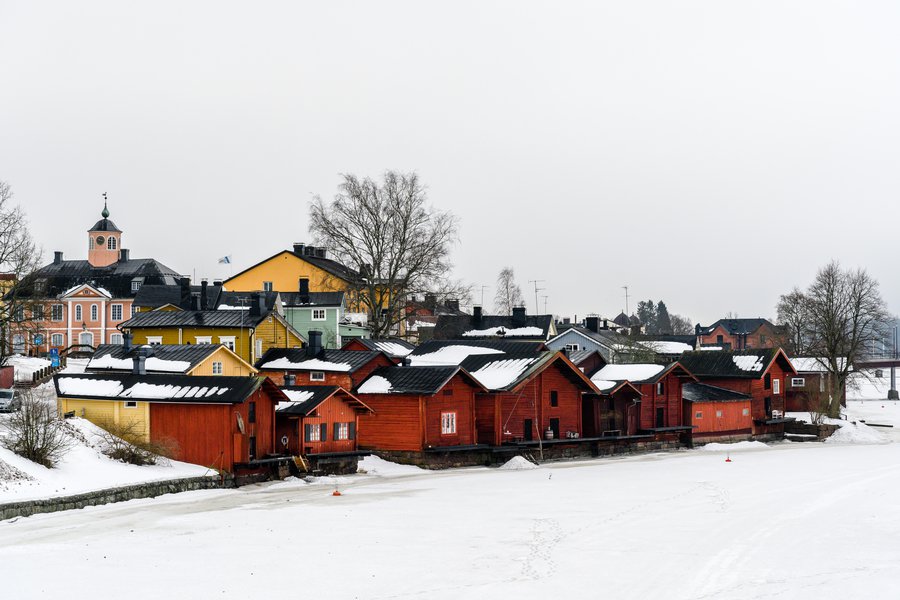 When I was planning a trip to Helsinki, seemingly everywhere I read about it mentioned a small town about an hour's drive that was worth visiting. It sounded picturesque, and I had imagined (falsely as established here) that Helsinki was much more industrial; the contrast sounded nice. So I thought perhaps a night there, in the town of Porvoo, on the way up to Lapland or back would be a nice idea. But when I researched a bit more, it sounded more like a drop-in thing, if we had time. So we decided not to count on it, but see if we had extra time. 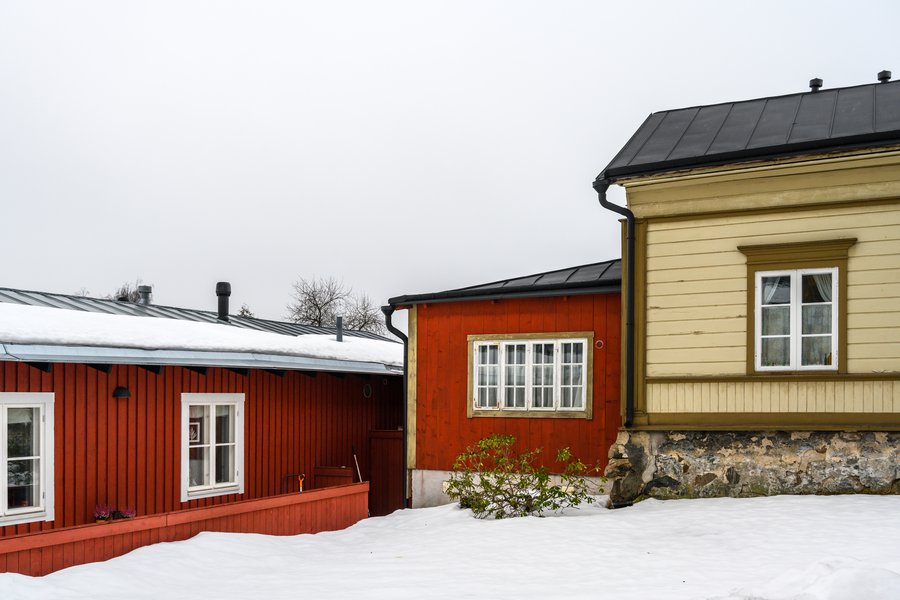 But after a walking tour of Helsinki and a few nights there, we thought perhaps our last morning we might be able to squeeze it in on the way to the airport. And our hotel, Lilla Roberts, arranged a driver, Heike, to take us to the town, and then on to the HEL airport. 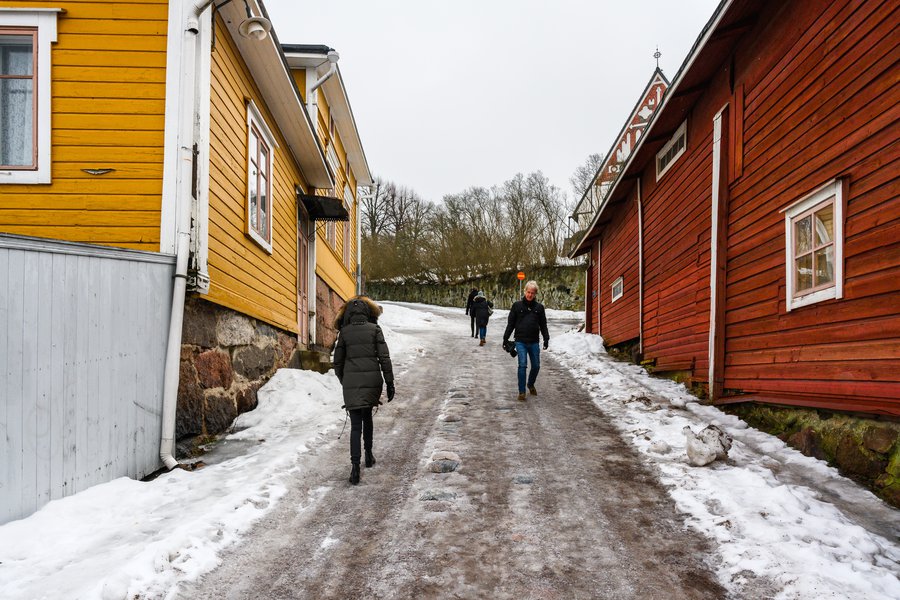 As you can already see, the colors were indeed charming. The small city, we learned, was the original seat of government in Finland, and it reminded me a bit of Torshavn in the Faroe Islands, with its ruddy wooden structures. 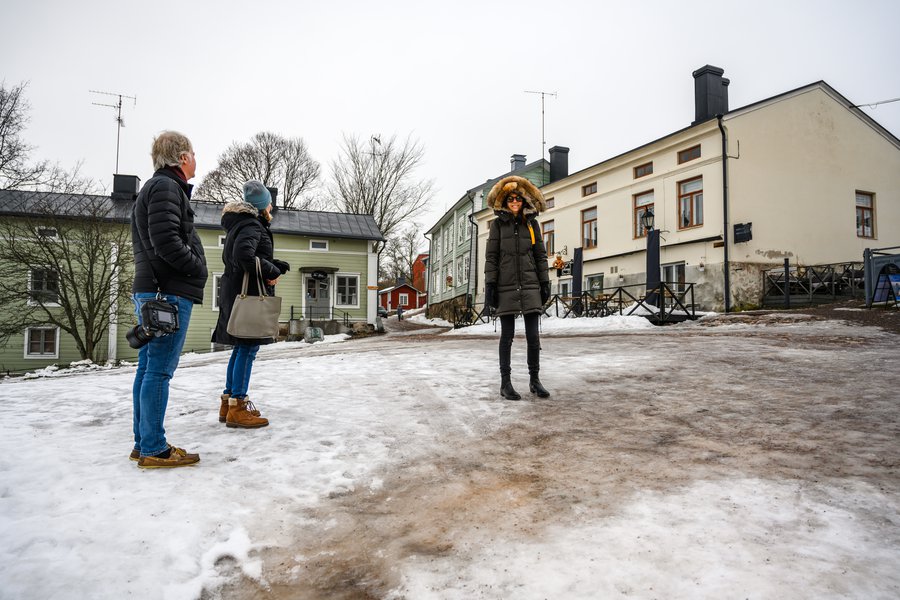 The city, like Helsinki, was also a sheet of ice. But the hilly nature made surmounting the streets with leather boots a cautious endeavor, for me. In the photo above, I am likely begging Walker not to take a photo and help me down the road. Terrifying! 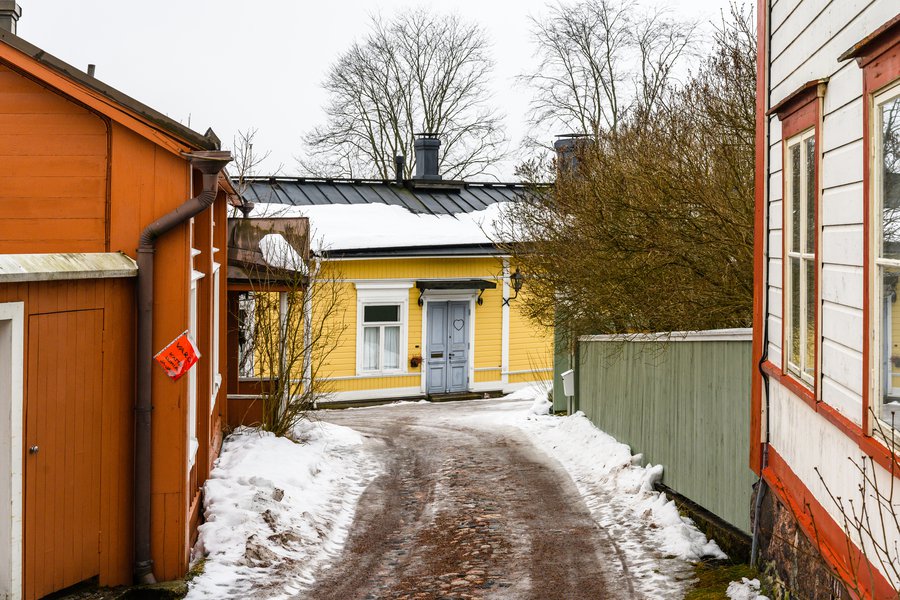 The people of the city didn't seem to mind and managed to walk normally, despite the conditions that surely would've precipitated lawsuits in the states. 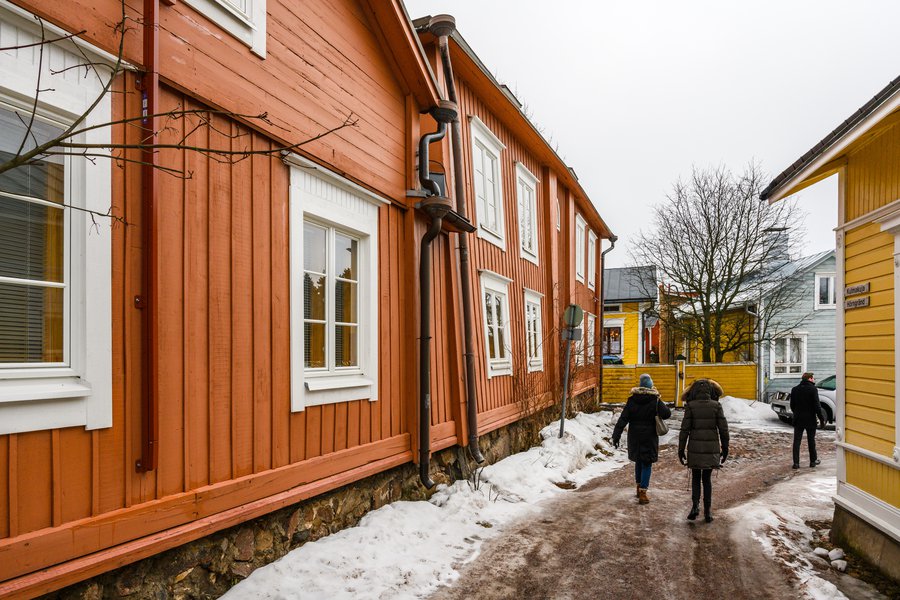 Porvoo itself, at least the historic center we visited, was mostly closed on a Sunday morning, except the local Lutheran church, which we visited and found nearly every pew full. 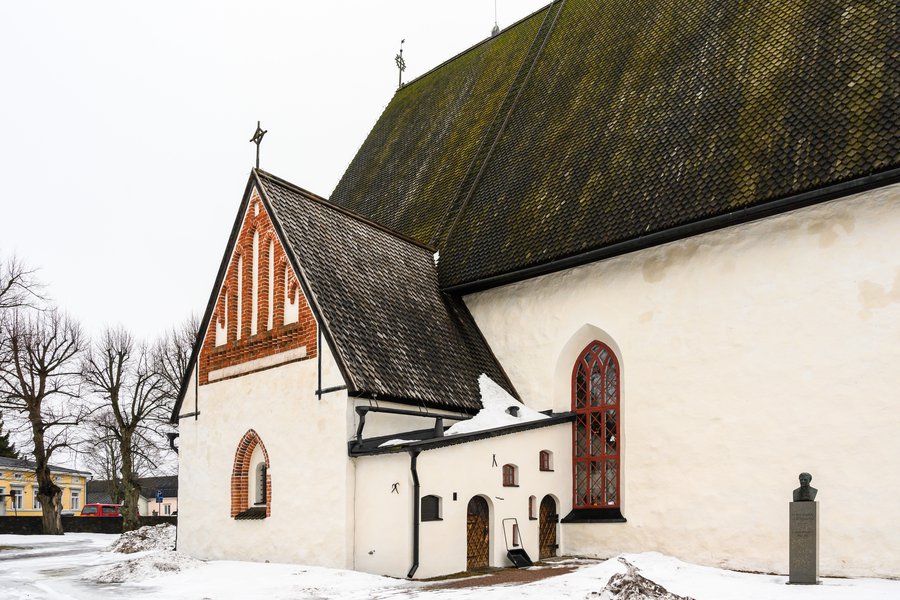 Heike said the cathedral, as they referred to it, had been built in the 13th century, but parts of it had burned down a few times, most recently 2006. 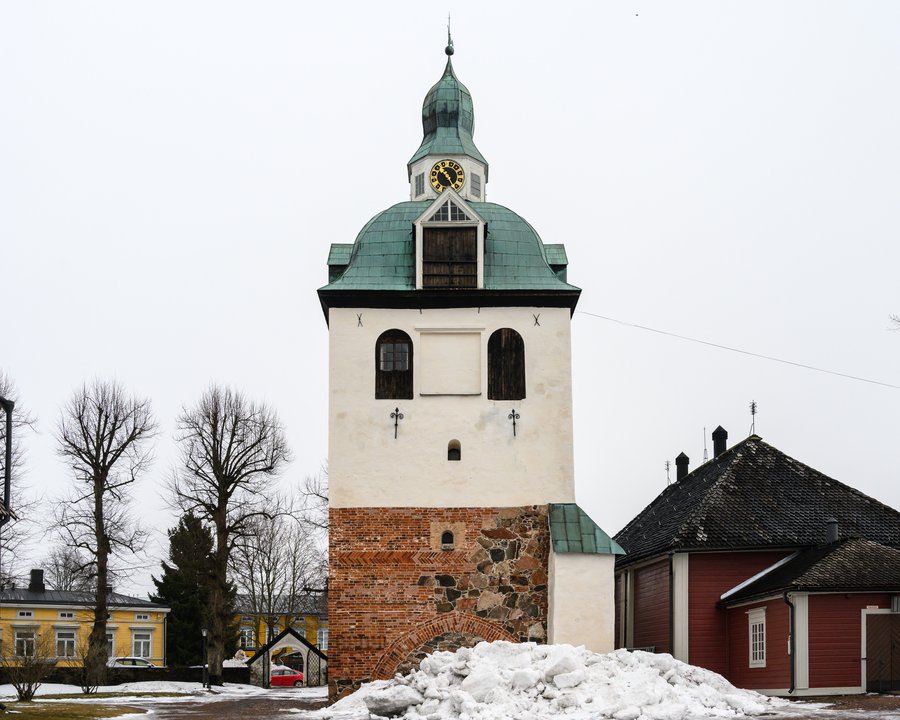 The temperatures were nothing close to Lapland's, but I still found walking around on a chopped up skating rink to be very cold, 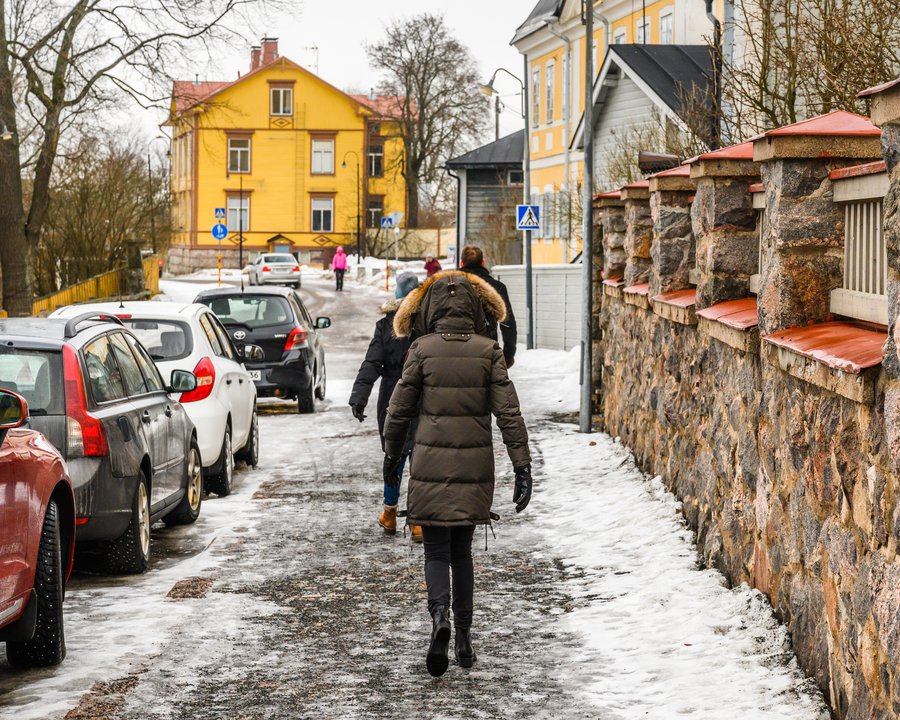 so was glad we stopped into the bakery for some coffee and pastries.

The city protects the historic paint colors very closely, Heike told us, and we could tell people put pride into their preserved history. 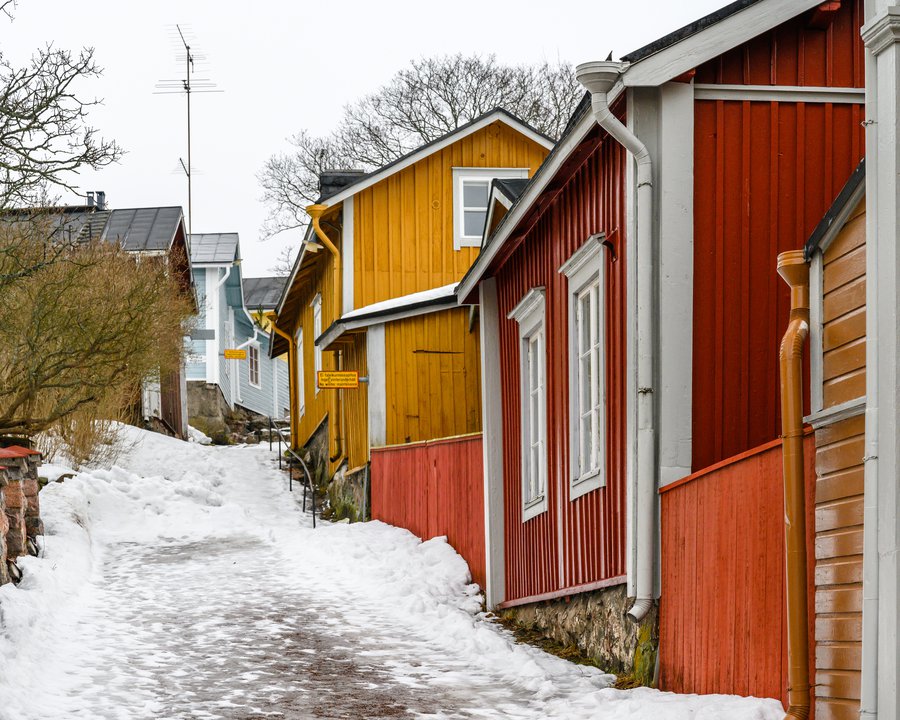 Look how much sunny yellow, encouraging on a gloomy, biting day. #itwasallyellow

Are you sensing a theme? Ok, there are three. 1. I was cold. 2. We didn't learn that much because most buildings were closed and 3. The streets were icy. Heike was also a nice (sarcastic) guy, but mainly a driver, not a tour guide. He wore thin leather dress shoes and told us not to walk carefully as we'd be more likely to fall. I tried it, and almost fell. 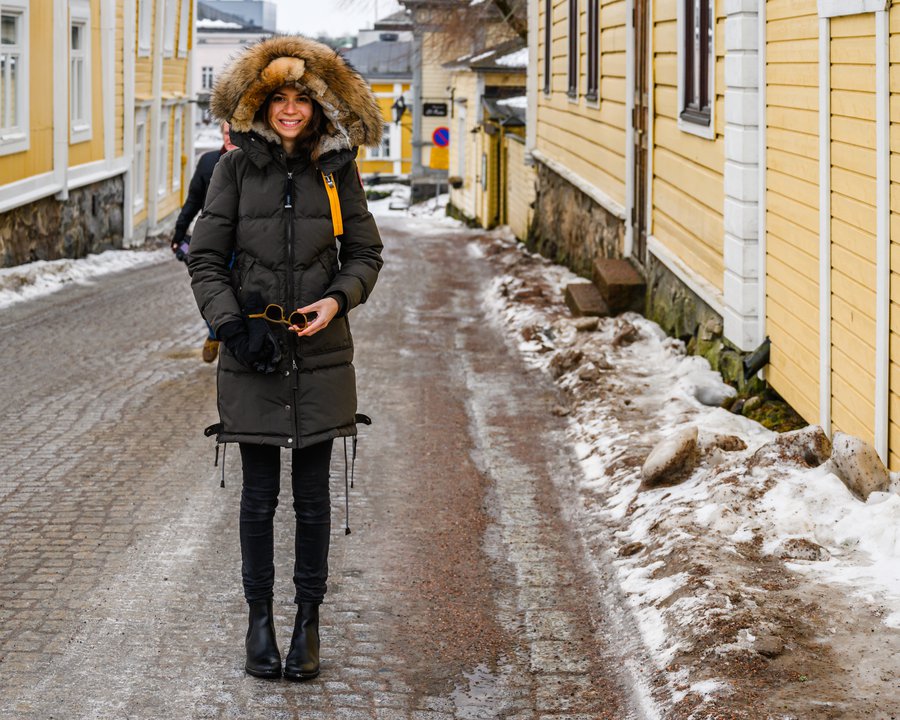 Behold! A picture of the beloved photographer 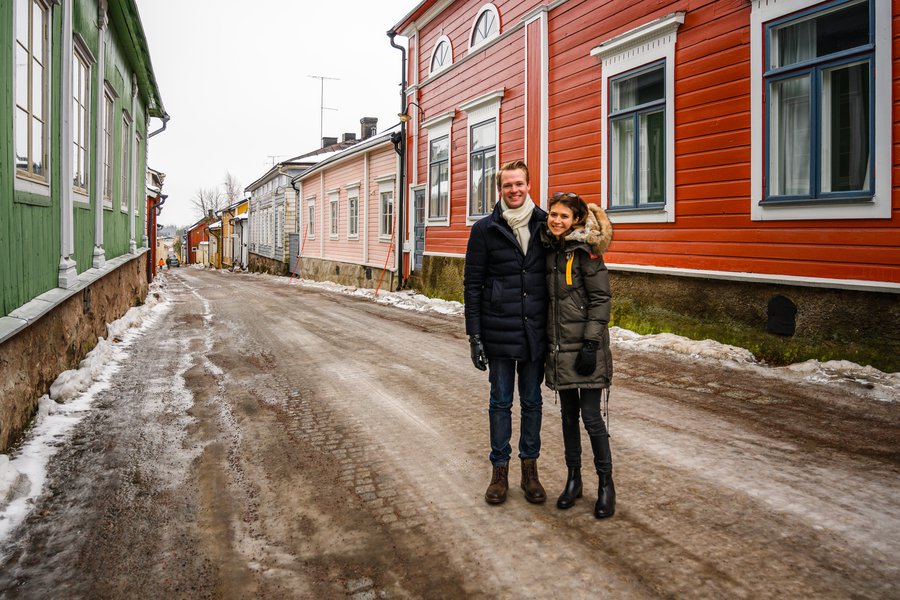 and his wonderful family, none of whom were cold like this Jersey girl. 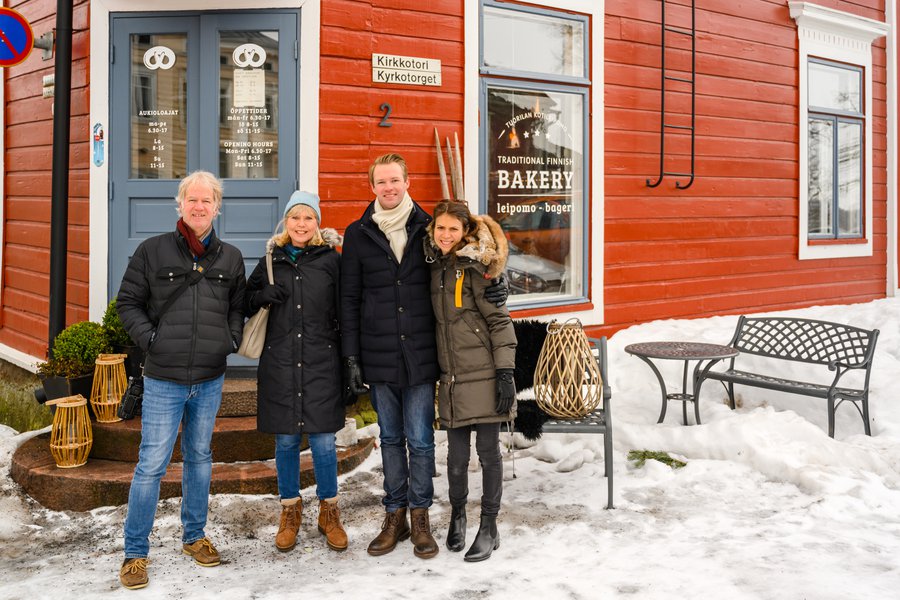 At the very end of the tour, we walked by some of the most prominent historical buildings.

and again, right in the town square, tried not to fall. 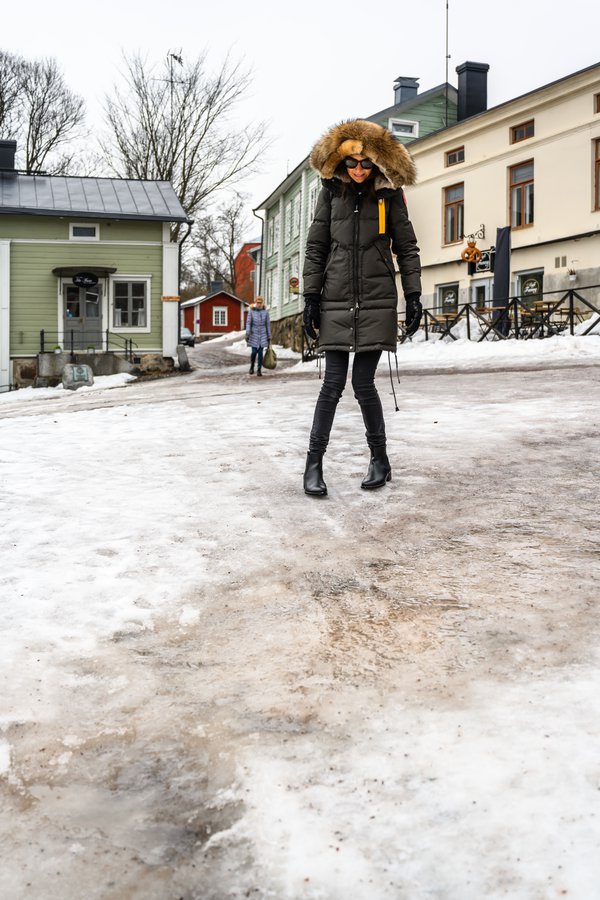 I'm sure this city is stunning in the summer sunshine, the blues again the crayon box of colors. Next time I visit in the winter, I'm bringing snow boots and a box of Kosher salt! 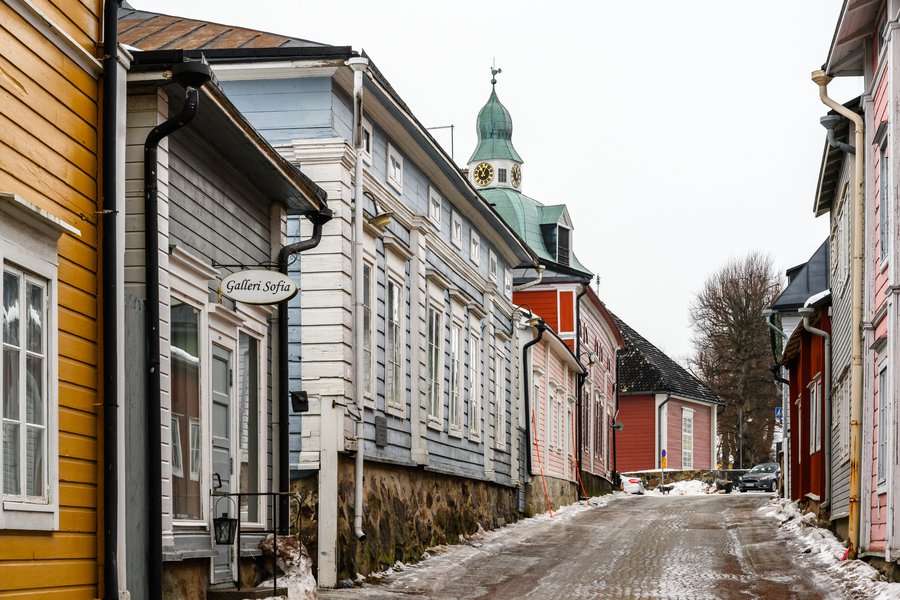